My destination for this evening’s camp was the campground at Olallie Lake.  Olallie is the name the native Indians call the huckleberries.  The unpaved Forest Service road that I crossed at the Breitenbush campground was the same road that connected with the Olallie Lake resort; in fact my maps showed that this road provided access to a number of lakes in this region. I was not sure what to expect in terms of amenities and facilities at this lake resort, but it didn’t take long to find out.  I arrived at 7:30 p.m., just as it was starting to get dark, and proceed to the tiny store facing the lake.

On the front porch I met Brown Bag and Hiker Box who were drinking sodas and eating candy bars.  The store was quite small, with a very limited supply of hiker food, all of which was quite expensive.  The only thing I was after was a cold soda pop; in fact, I bought three of them at a buck fifty apiece, and then sat down on the steps leading up the store entrance to drink them. There was no electricity to the store, so when it got dark, the store closed.

On the wooden benches outside the store, I placed my pack, then pulled out the food bag and prepared a couple of sandwiches, one with a tuna fish spread, and of course, one with peanut butter and jam.  While I was enjoying my meal, Lt. Dan, Brownie, Feather, Swiss Army, and Hooligan showed up.

As resorts went, this one was rather rustic, it being seventy years old.  It had ten rental cabins that would accommodate groups of various sizes, but no electricity or indoor plumbing. Toilet needs were taken care of with outhouses scattered throughout the cabin area.  Each cabin had a wood-burning stove and wood was provided as part of the rental rate.

Fishing was the main attraction at the lake and small rowboats and dinghies were available for rent, as motors were not allowed on the lake.  The setting for the resort was astounding, which was a testimony to its popularity despite its lack of amenities, for at the far end of the lake, snowcapped Mount Jefferson dominates the skyline.

Ownership of the resort has just changed hands and the current owner was Diane Whitefield, while the manager was a young lady named Sam.  Sam has hiked the PCT several years before and had managed the resort for the past three years.

She was gregarious and engaged the hikers in pleasant conversation while sitting on a bench outside the store entrance.  She announced to the group of ragged hikers sitting and standing around her that she was going to prepare chili hot dogs with all the trimmings, and all were invited to share in the meal, which would be ready in twenty minutes.  She then left the group and went to a building adjacent to the store that had the appearance of being an employee dining hall.  I can hardly wait to partake of this unexpected trail magic, even though I had already eaten for the evening.  Food, like water, was not something I was willing to pass up, especially when it was free.

Twenty minutes later, ten of us were standing in line in the kitchen waiting our turn to spoon piping hot chili onto roasted hot dogs on our plates, then smother them with lettuce, tomatoes, and grated cheese.  I did go back for seconds.

I was the first to leave the bunkhouse as it was dark and I still needed to find a place to set up my camp.  As I was preparing my pack, which I had left sitting on a bench next to the store, I looked towards the back of the store and saw that Cookie had just arrived at the resort.  I told her about the chili hot dogs being served in the dining hall, but she declined the offer, saying that the combination of chili and hot dogs wouldn’t agree with her stomach.

There were several tent sites just off the PCT trail, so I backtracked to the trail and followed it a few hundred feet until I found the main campsite.  In the middle of the camp stood a fireplace, made from a large cast-iron stove surrounded by rocks.  There was a flat piece of ground off to one side of the fireplace where I chose to camp for the night; later, Hooligan, the hiker from Ireland who wore a kilt, barged his way into the camping area, and set up his campsite in front of the fire pit.  Then, he proceeded to gather brush and bits of wood to make a fire, which turned out to be a very smoky one.

The smoke hugged the ground and drifted over to where I was trying to sleep; it was irritating and I was on the verge of asking him to please put the fire out.  But then I thought, this is his experience, his trip, and if the fire makes him happy, I can tolerate it.  I rolled over and went to sleep.

I was out of camp by 4:30 a.m., long before anyone else was stirring.  With this many hikers in camp, I wanted to make as many miles as possible before they started passing me, which they all did before I had gone twenty miles; at twenty-five miles, I stopped for the night as rain was threatening.  The only place I could find to camp was a piece of ground right next to the trail that has been cleared of all trees, as a right-of-way for high-tension power lines.  It was probably not the safest place to camp, but to go farther into the woods meant having to put up my tent in the rain.  Just as I finish staking the tent to the ground, Hooligan passed me and chided me for my choice of campsites.  I had to agree with him, but I preferred to stay dry. 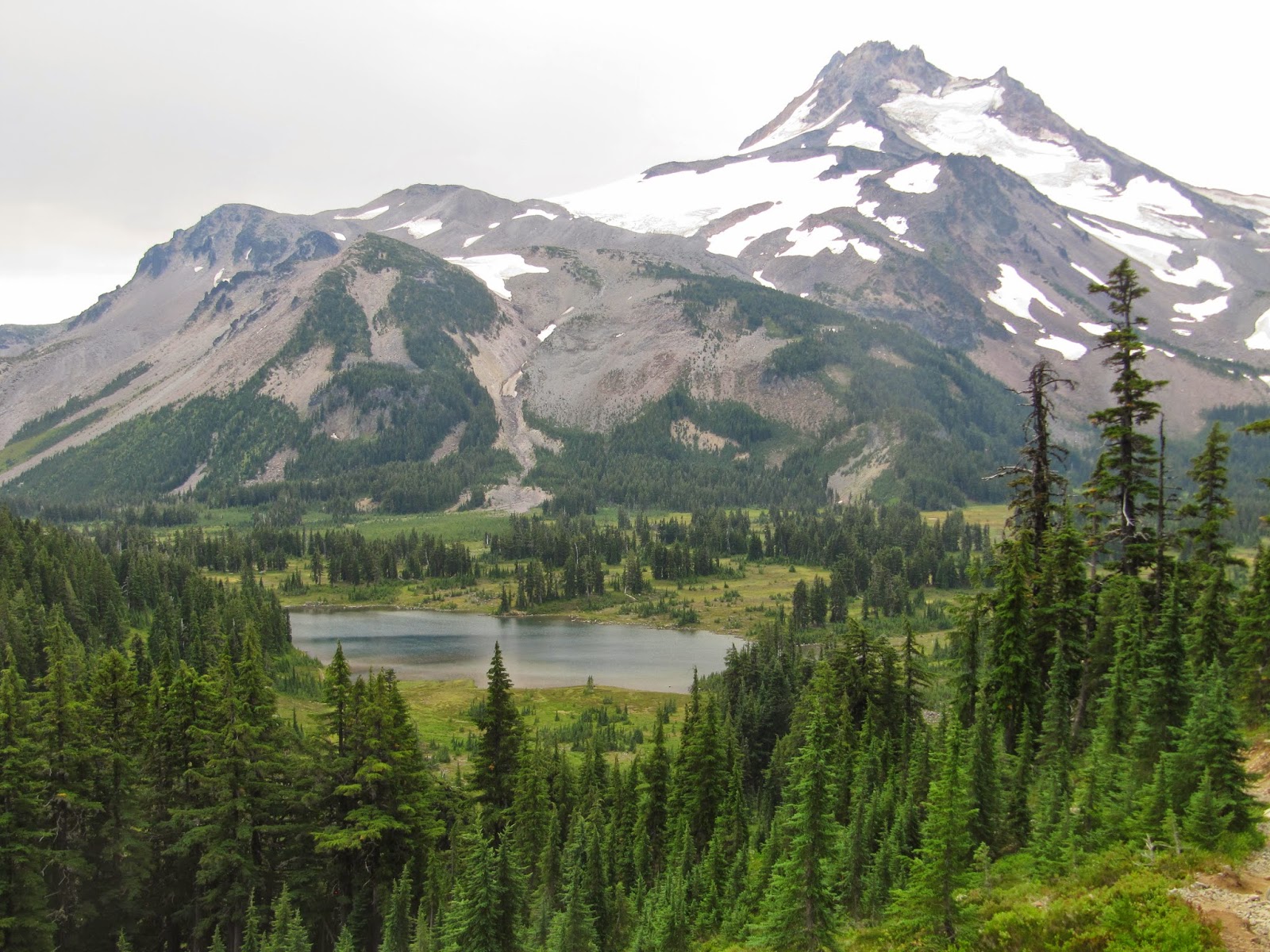 Passing by Mount Jefferson.  The parklands around the base of Mt. Jefferson are easily accessible by day hikers and I saw a number of them in the area. 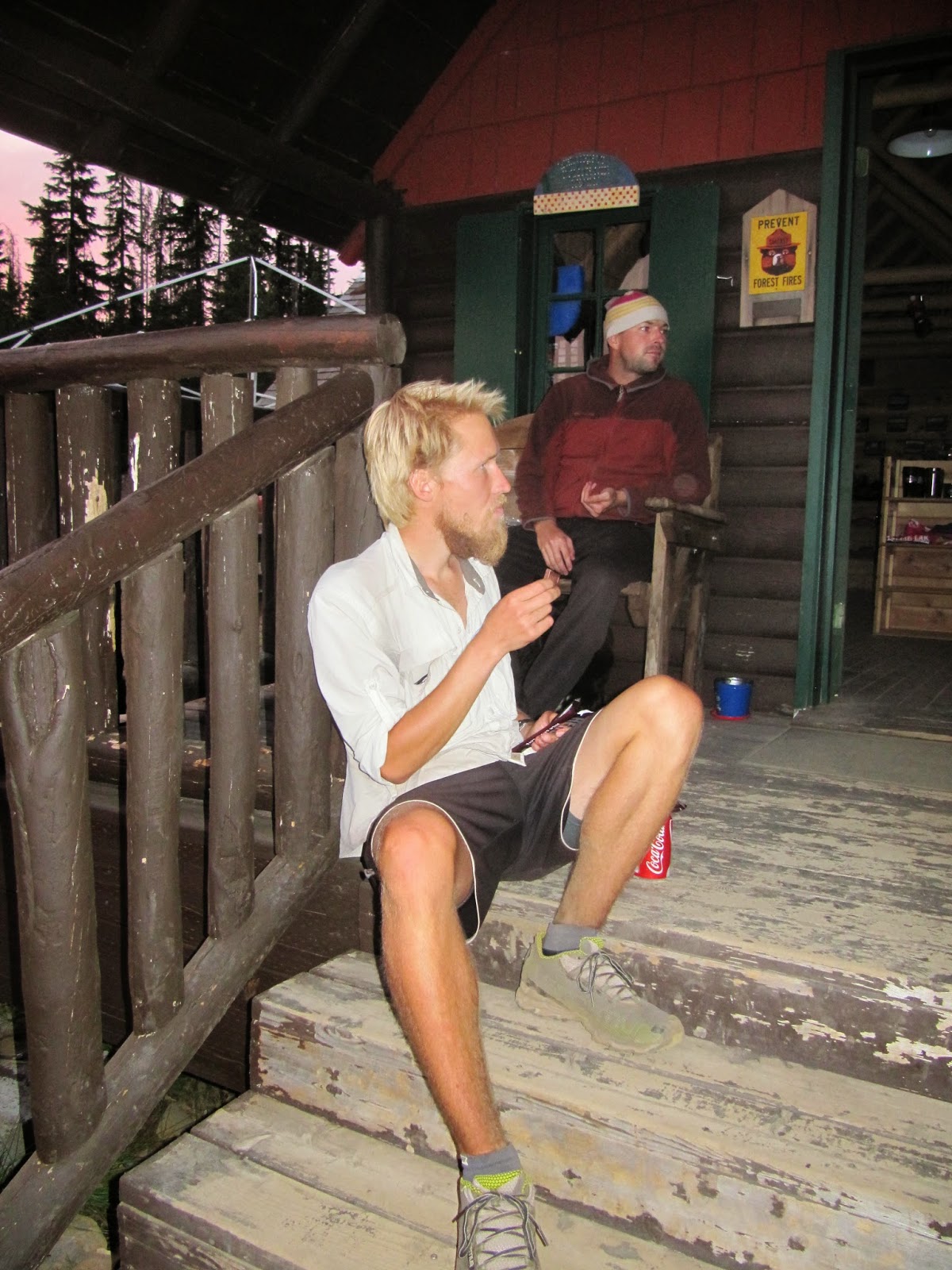 Feather sitting on the steps of the rustic store at Olallie Lake Resort. The stone has no electricity. 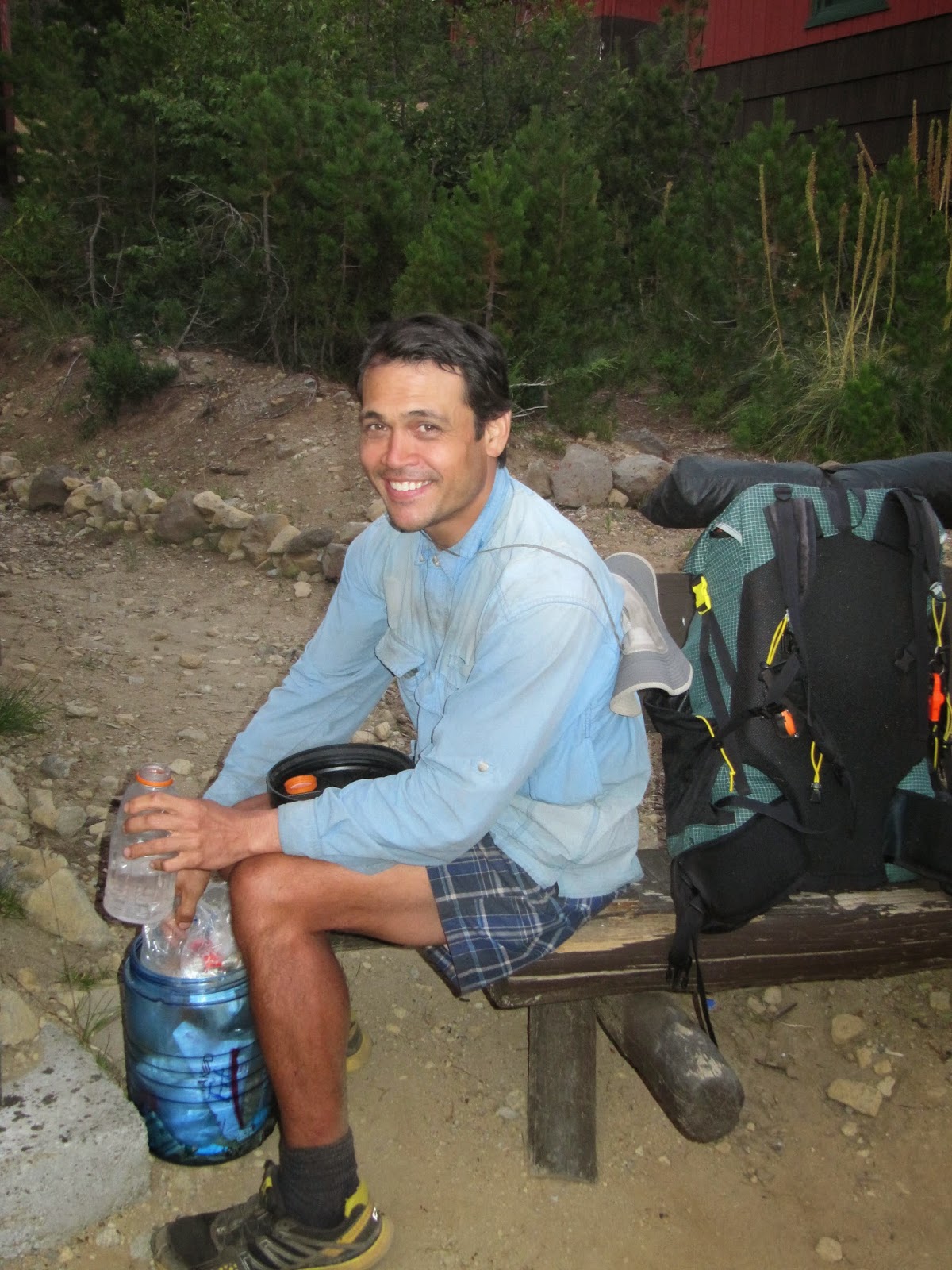 Lt. Dan was one of about 12 hikers who made it to the store this evening. 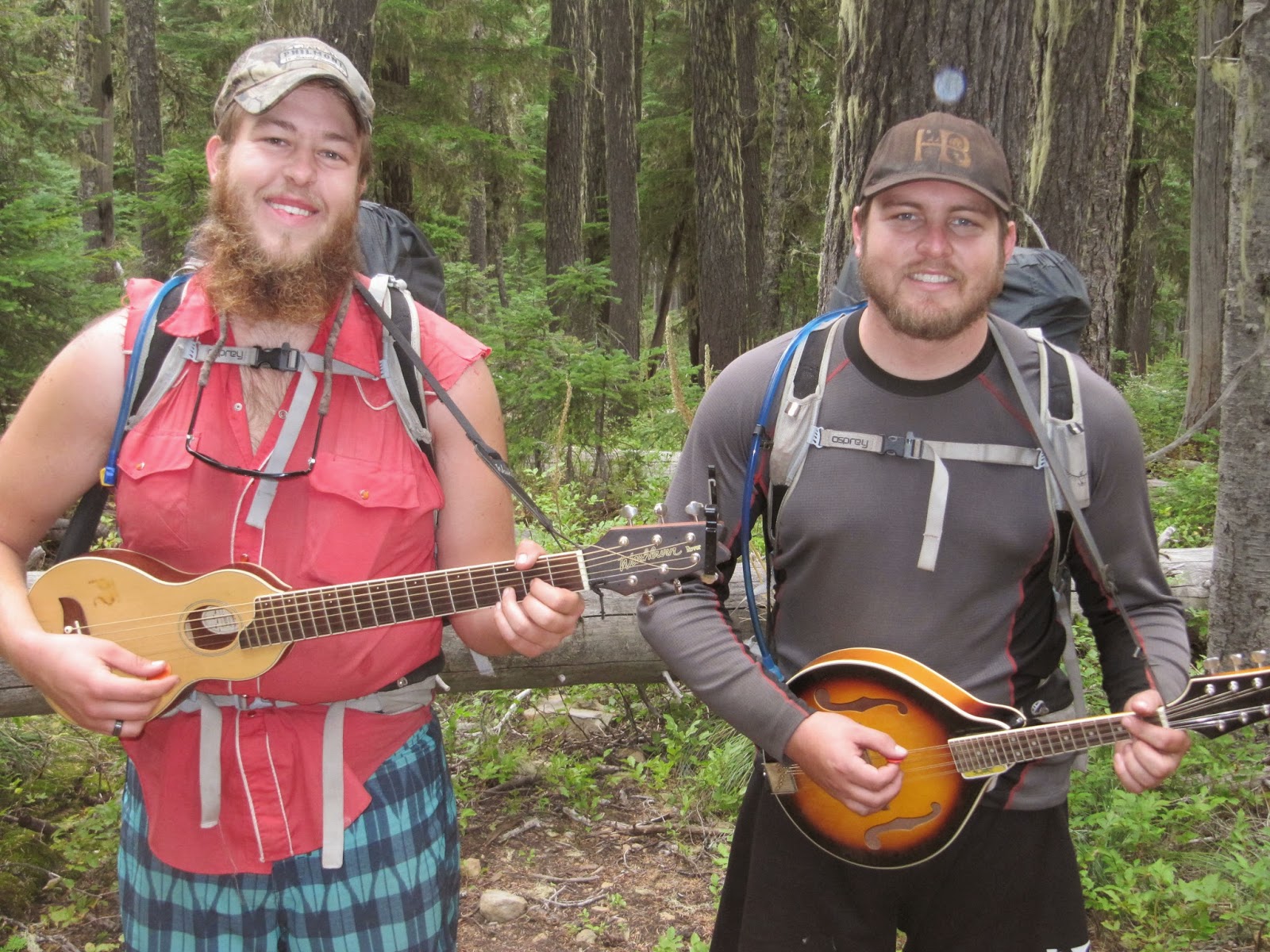 These are two characters I met on the trail and asked them to pose for a pictures. I heard later that they were excellent musicians.