I have no qualms using prayer to resolve problems; it has worked for me every time I’ve employed it.  And after reading trail journals from other thru-hikers, I see that it’s not all that uncommon for hikers to ask for help and assistance from God.

After kneeling in prayer beside the small pond, I arose and started backtracking on the trail that led me to the pond.  Almost immediately, the impression came to me to take the first secondary trail I came to, with the assurance it would lead me back to the Pacific Crest Trail. When I came to the first trail, I followed my impressions and turned left, and after walking a short distance, I found myself back on the PCT and soon after reached the trail junction with the wooden sign nailed to the tree.  And this time, I went left.

I was grateful beyond measure for the help I had just received; it provided additional testimony, to my already strong testimony, that my Father in Heaven is real, that he cares about me, that he knows me by name, and is more than willing to grant help and assistance when called upon.
As it is written, “All things are possible to him that believes.” (Mark)

I only hiked a few miles farther before camping for the night above a small lake with no name on a soft bed of moss.

After leaving camp early this morning, the trail continued to climb two thousand feet in elevation, only to lose the same amount of elevation a few miles later.  There was a major bridge crossing at Delate Creek beside cascading falls, and another crossing at Lemah Creek.  The bridge at this latter crossing had been washed out by flood waters, and its remains could still be seen piled in heaps on either side of the stream; the only way to cross now was on a log that just happened to be long enough to span the stream.  Just as I was prepared to step onto the log and start the crossing, Trout showed up.  I stepped off the log and encouraged him to cross first so that I could snap a picture of this unique stream crossing.  He made it fine, and now it was my turn.

The stream was running fast as it coursed down the steep mountainside.  Huge boulders lined the streambed and a fall into the water would be catastrophic, causing severe injury, if not death.  I started across, trying to stay focused on the log itself, and not let my eyes wander to the water below.  Five feet from the opposite shore, I lost my balance and started to fall.  Knowing I was going in, I made a frantic and death-defying leap towards the steep bank leading to the water’s edge, and made it – my shoes landing in the dirt just at the water’s edge.

After another two-thousand-foot climb, the trail began a long sweep around the north side of Waptus Lake, followed by another fifteen-hundred-foot climb to Deep Lake.  Somewhere along the trail, south of Deep Lake, I encountered an older trail hiker, who appeared to be very casual and laid back.  He was older than the average hiker, whose age is thirty-four, and he didn’t appear to be moving very fast.  He gave me his trail name, but I can’t remember it.

Stuffed in his shirt pocket was a pipe, and from the smell of it, I would judge it to be his marijuana pipe.  In conversation, he told me he was heading for Deep Lake, where he anticipated hanging out for a few days, just to do a little smoking and daydreaming.  I don’t think he made it to Canada.
Climbing the cliffs above Deep Lake, I could see why the laid-back hiker wanted to spend a few days at the lake.  It was in a breathtaking setting, situated as it was in a basin against a headwall that rose hundreds of feet above it.

This spur trail was the old PCT and was still used by equestrians and hikers if the trail through this section happened to be closed due to deep snow.
At mile 2,452, I found a nightmarish stream crossing.  For northbound hikers, who passed through in September, the stream was passable, albeit without some increased heart palpitations. Flood waters and erosion had carried massive rocks from the cliffs above, and a crossing of this rock-choked stream took some serious planning.

As I stood at the water’s edge, like a chess player, I plotted my every move to ensure that my route across the rocks would not leave me stranded somewhere in the middle, with nowhere to jump.  It was not a matter of getting my feet wet; it was a matter of making it safely to the other side without slipping or falling and being washed over the falls.

Even after making a safe crossing, the trail didn’t immediately start at the water’s edge; rather it started three feet above the flowing water, on a narrow ledge that required precise placement of the feet on slippery rocks to ensure the climb up; otherwise, a slip will send me over the edge and into the rumbling waterfall.  I made it, but I didn’t like this no-name stream crossing.  I considered it an intimidating one.  And regardless of the water level, horses would not be able to negotiate this trail; they would need to use the older PCT that traversed around Hyas Lake.

At Deception Pass, the old and the new PC Trails came together and continued their journey north towards Piper Pass.  The trail for miles had been across the steep slopes of the mountains, with nary a single flat place for the placement of a ground cloth and sleeping bag.  At the top of Piper Pass, I located the only flat spot available to bed down for the night, and even then it was on the side of a steep cliff.  I searched all around the area, to make sure I hadn’t overlooked a better spot, but everything was sheer cliffs and forested slopes, so I felt grateful for what I had.

As I was finishing my evening meal, which included a supply of frosted animal cookies sent to me by my lovely wife in my last resupply package, another hiker arrived at the pass.  It was just minutes from getting totally dark, and I felt bad to have to inform him that there were no other spots available for camping.  He listened to me, but decided to make his own reconnaissance of the area, and was gone for a good fifteen minutes.  When he returned, he said nothing, but continued down the other side of the pass.  I suspected that the downhill side would be just as steep as the uphill climb, and he would have to go a long way to find a decent camping spot for the night. 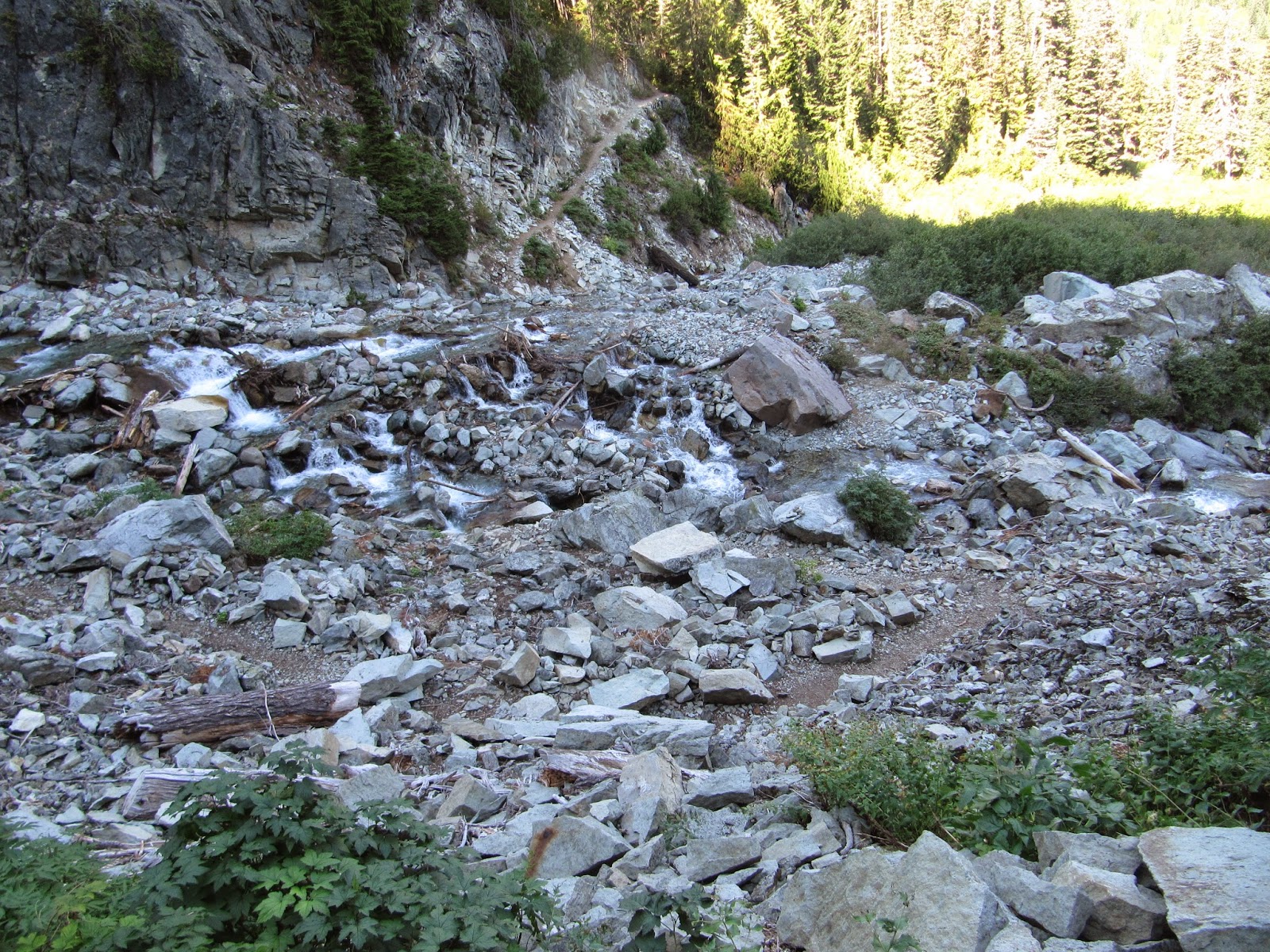 The approach to this un-named stream crossing.Look close, and you can see the trail heading up the other side of the stream. 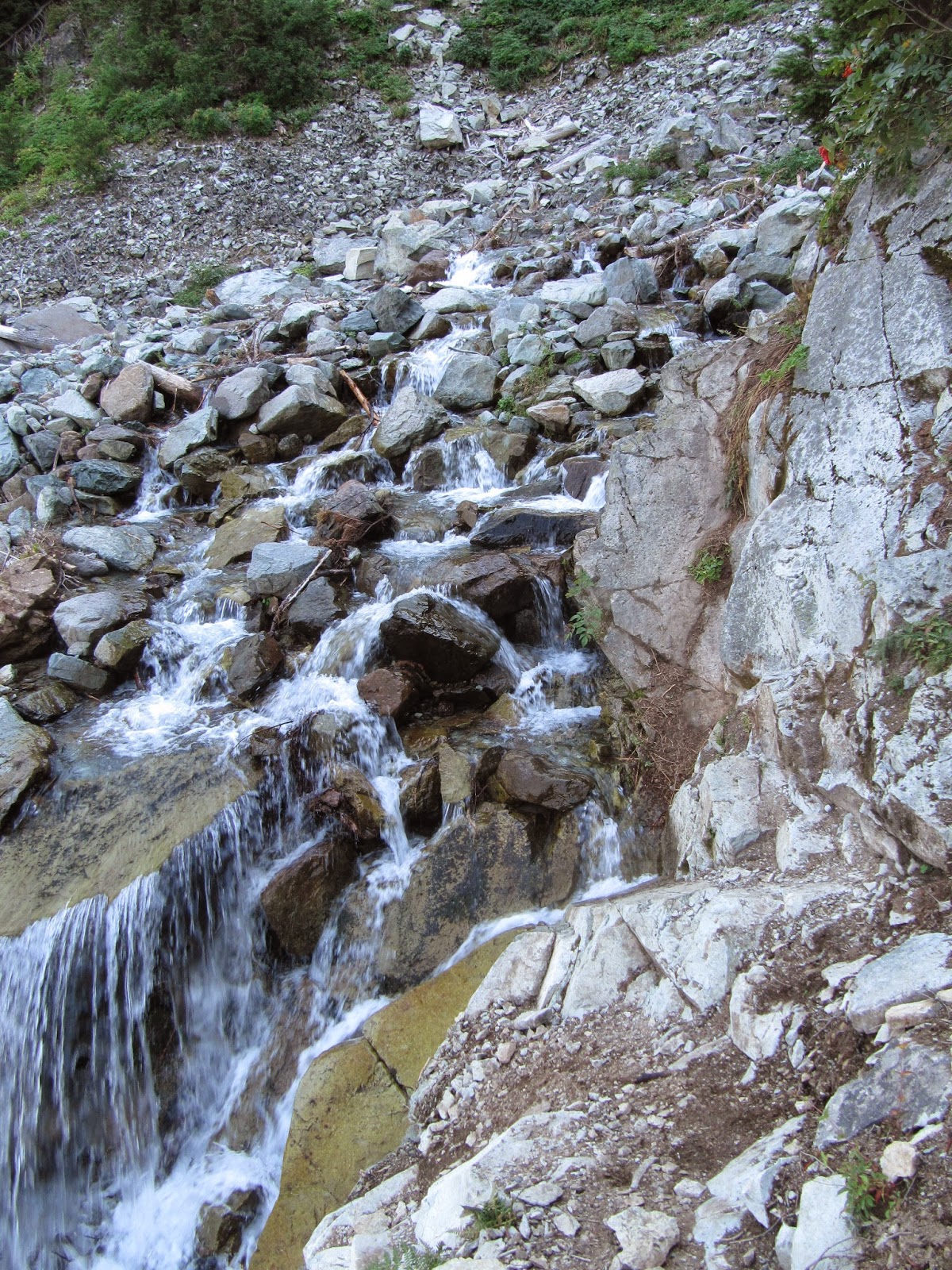 This is looking back at the stream after having ascended to the trail on the other side. 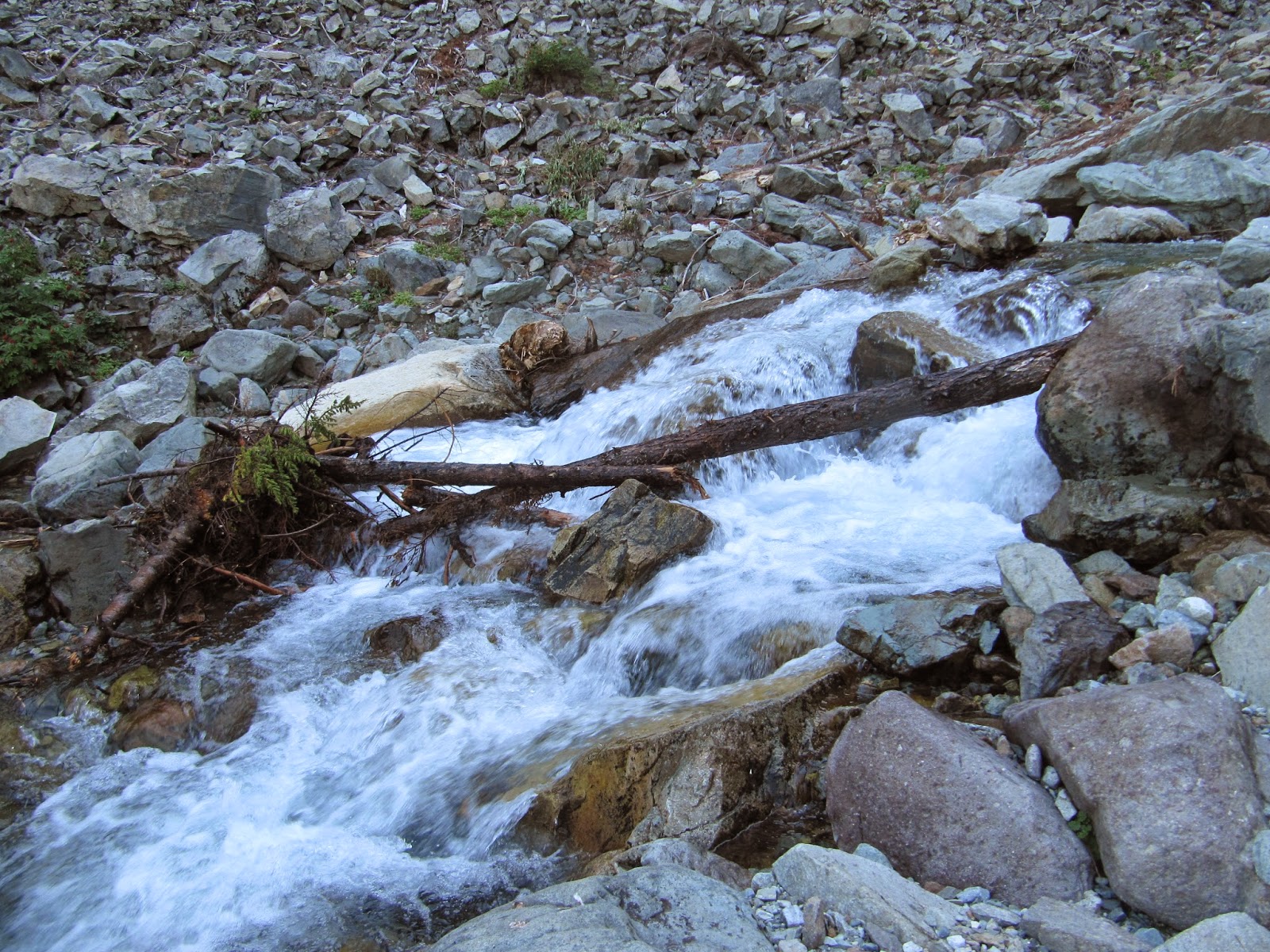 The middle of the stream crossing. Horses can not come this way. There is a lower trail several miles distance that they must travel. 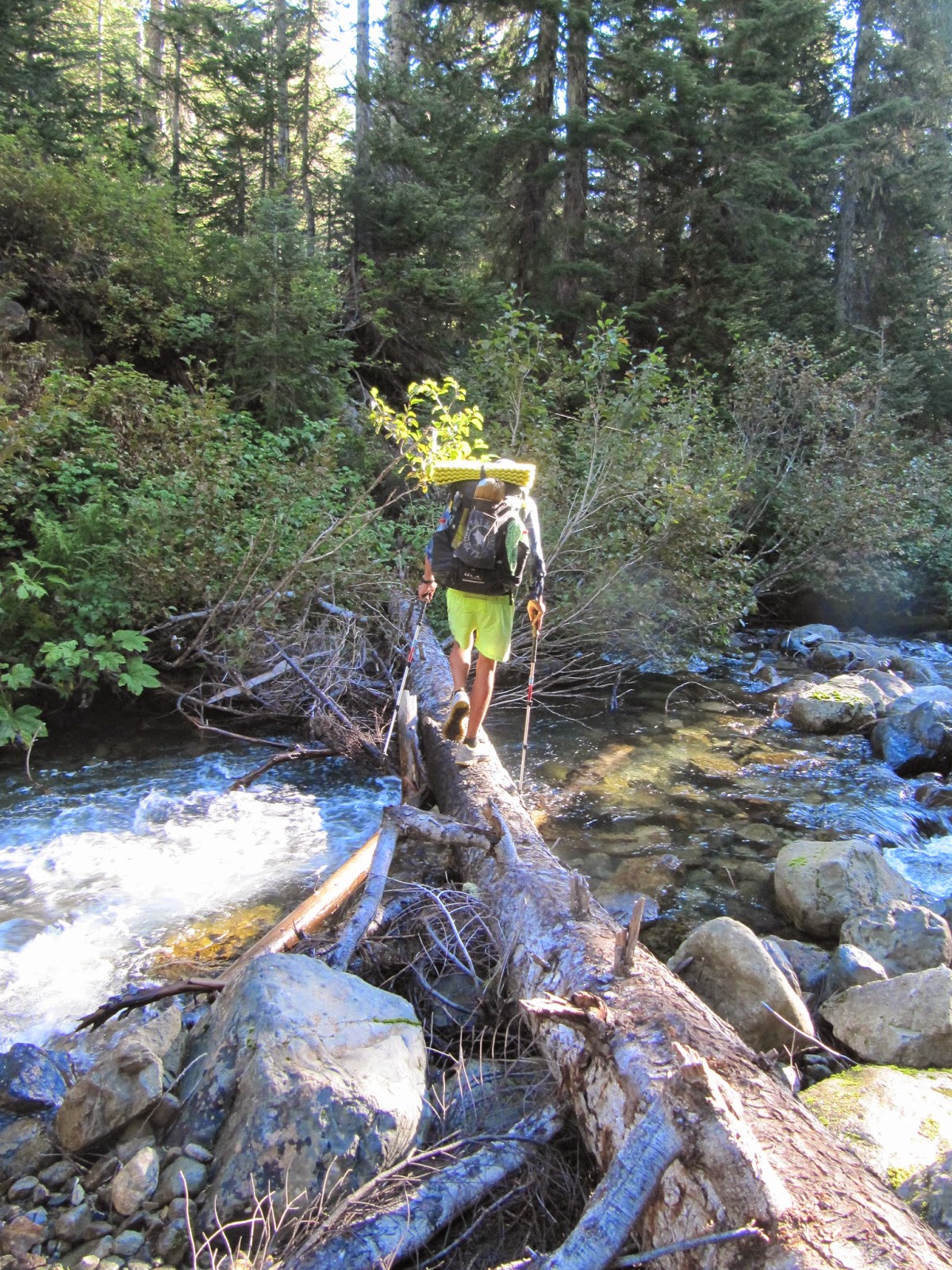 As I was about to make this stream crossing, Trout showed up. I let him go first so I could take his picture. When it was my turn, I almost fell in, at the far end of the log. 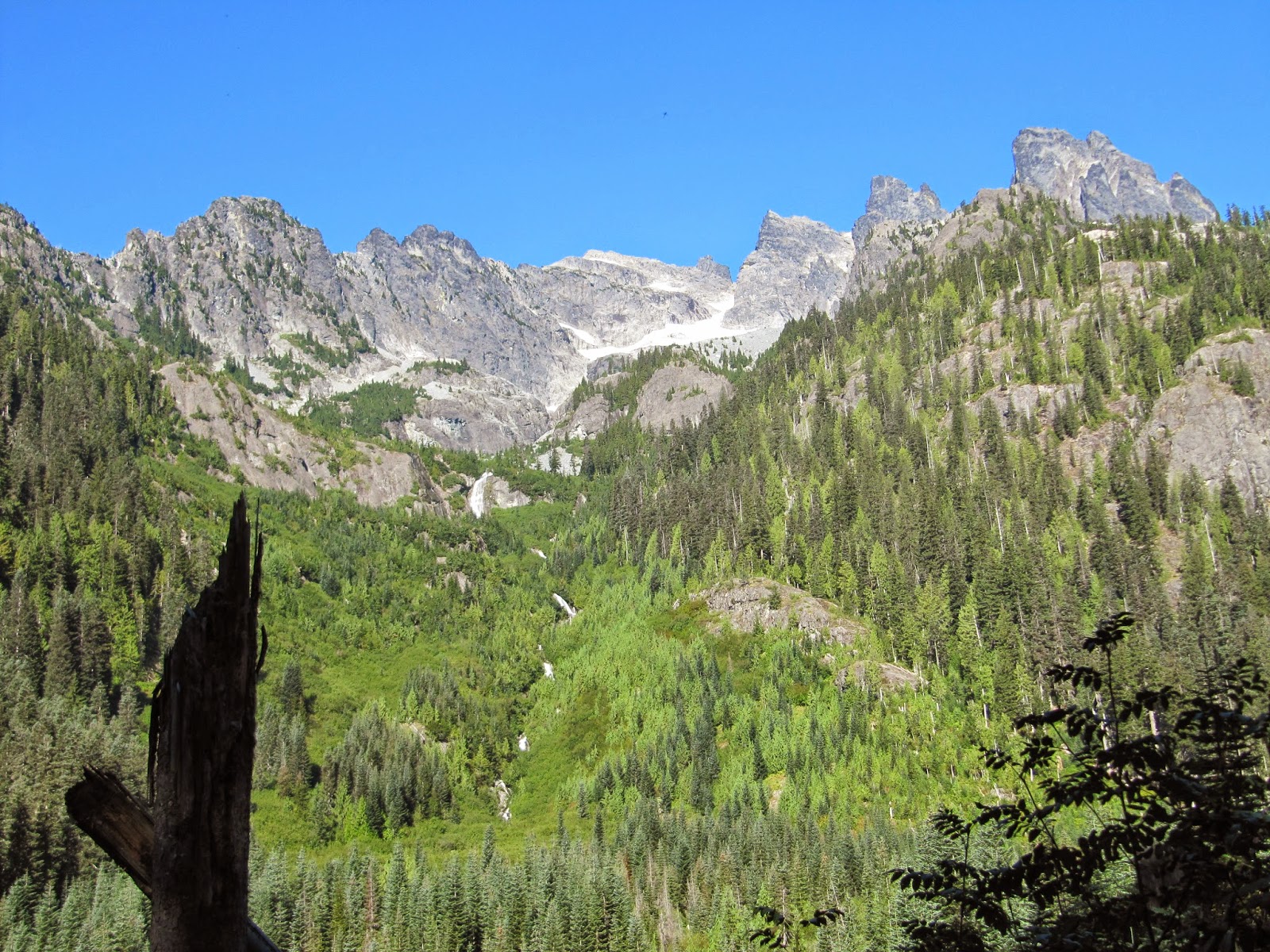 The great wilderness scenery from the trail.