In places I too, held on to the cable as I walked along the trail, as one slip or misstep on the wet and moss-covered rocks would send me careening over the edge to the jagged rocks, several hundred feet below.  More than one person has fallen to their death after slipping on the rocks.

In addition to the falls coming off the canyon walls above, Eagle Creek also descends the canyon to the Columbia River via a series of spectacular falls and drops.  There are a number of deep-water pools that looked enticing to swim in, and many hikers will avail themselves of the opportunity to do so.  However, a swimmer must be very attentive to their surroundings, as many of the pools end in steep plunges that are just around the corner, out of sight from where the swimmer is playing in the water.

Halfway down the narrow gorge is the famous Punchbowl Falls, and for many years
visitors to the falls would dare one another to make the eighty-foot leap into the frigid waters below the cascading water.  But accidents were common, as were deaths, so the Forest Service, who has jurisdiction in the gorge, put up signs telling the public that jumping and diving into the Punchbowl was no longer legal.  But that hasn’t stopped the young daredevils from continuing to make the leap, and deaths continue to mount.  Several days before I arrived at the falls, five young men, all from out of state, ignored the no jumping and diving signs and jumped; two were injured and one died, either from hypothermia or by drowning after being held underwater by the powerful force of the water coming over the falls.

All too soon, the alternate Eagle Creek trail ended at the trailhead parking lot adjacent to the 1920 stone bridge that spanned Eagle Creek, just prior to the waters of the creek flowing into the Columbia River.  From the parking lot to the Bridge of the Gods that crossed the Columbia River and connected Oregon to Washington, it was a three-mile roadwalk, first along a bike path and then along the historic Columbia River Highway
.
I was very intrigued with this historic highway on which I was now walking, for it was built as a scenic highway along the Columbia River Gorge starting in 1913 and completed in 1922, at a time when the Ford Model T car reigned supreme as the primary mode of transportation.  The builders of the highway constructed it along the lines of European motorways, complete with masonry guard walls, retaining walls, stone bridges, and stone gutters.

By the 1930s, however, the roadway was deteriorating primarily due to speed.  Motorists were more concerned with getting from point A to point B as quickly as possible rather than leisurely traveling the highway merely to take in the sights.

In the 1950s a new roadway was constructed at river level from material dredged from the Columbia River, and as time went on, much of the original historic Columbia River Highway was abandoned as realignment closed many sections of the roadway. (Historic)

As I walked the three miles to Cascade Locks, I kept a lookout for the restored stone bridges, the stone retaining walls and guard walls, and the turnouts where motorists could park and sit awhile in seating areas.  The three miles was a walk down memory lane, a nostalgic walk, for the road itself was a throwback to a time when the country was just becoming accustomed to motorized transportation.  I could easily envision motorcars of the 1920s cruising this scenic highway for no other reason than to enjoy the beauty of the Columbia River Gorge; cars with names that are still recognizable today – Chevrolet, Dodge, Buick, Model T Fords, and cars with names that nobody but antique auto enthusiasts would recognize like Auburn, Overland, Peerless, Westcott, and Cord.

As I approached the bridge spanning the Columbia River, known as the Bridge of the Gods, I passed a large oval welcoming sign from the city of Cascade Locks. The city itself is a direct outgrowth of the need for people to assist in portaging goods, material, and personnel around the rapids just upstream of the Bridge of the Gods, beginning as early as 1806 when Lewis and Clark reached this area on their journey down the Columbia River.  Members of Lewis and Clark’s Voyage of Discovery camped on the north side of the river, opposite the future site of Cascade Locks, on April 13, 1806. (Journals) 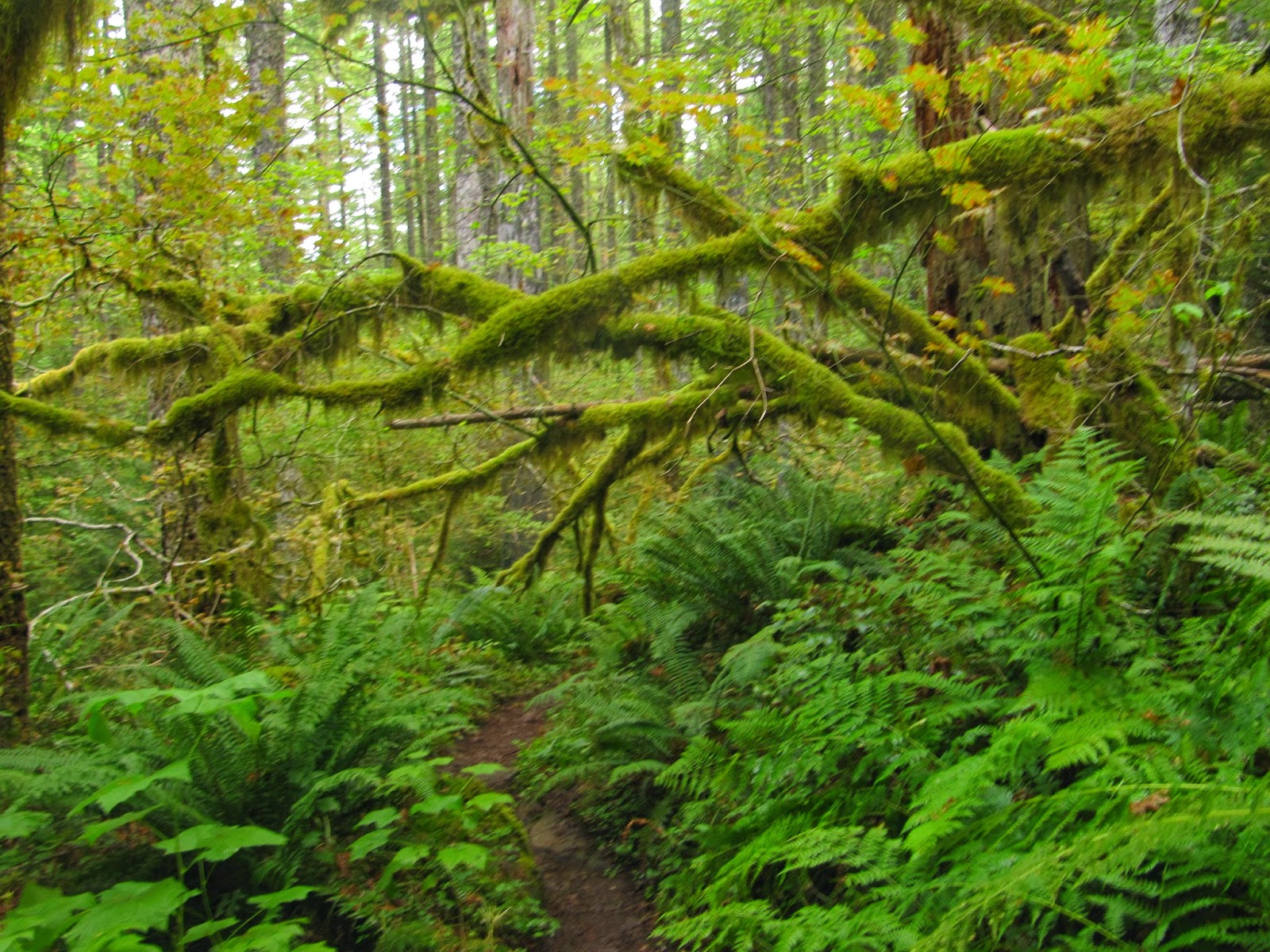 If it doesn't move, it gets covered in green moss. Contrast this image with images of the California desert or the high desert of Oregon. I'm amazed at the diversity of the landscapes I've been able to view on this long journey across the mountains. 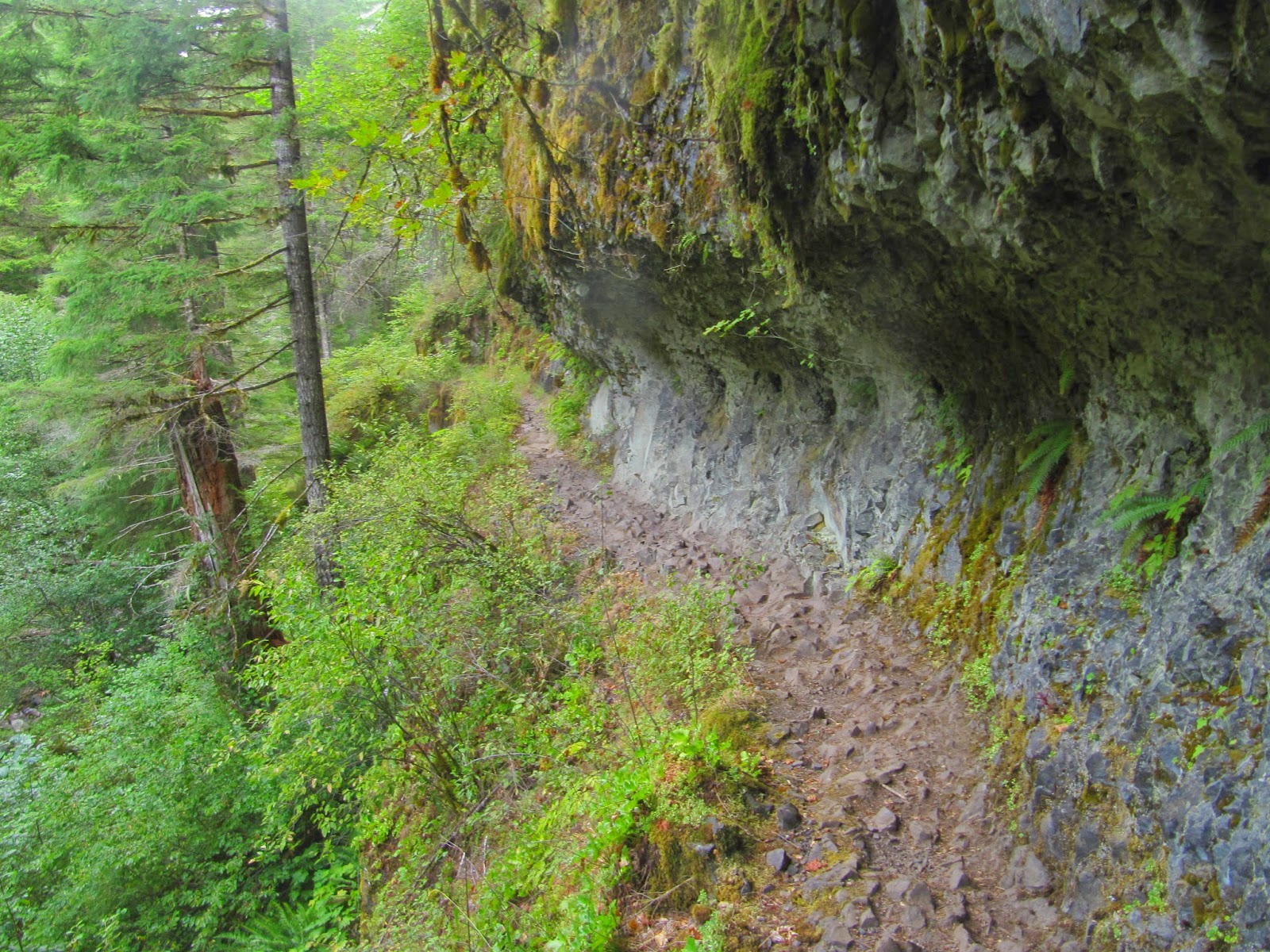 The trail along Eagle Creek was hacked out of the side of the cliff, giving visitors access to the numerous falls and plunge pools along the width of the creek. 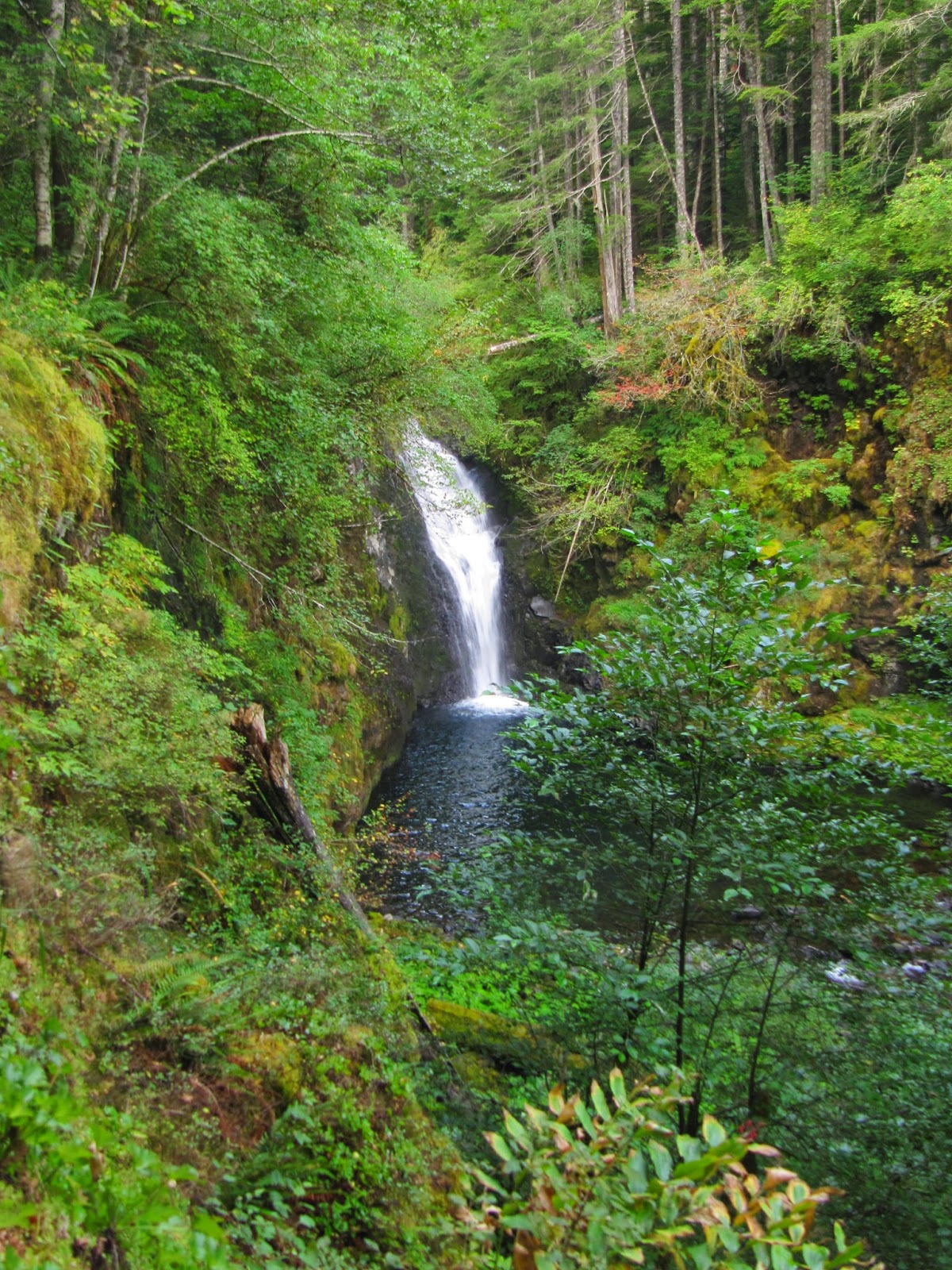 Just one of numerous falls along the stream. 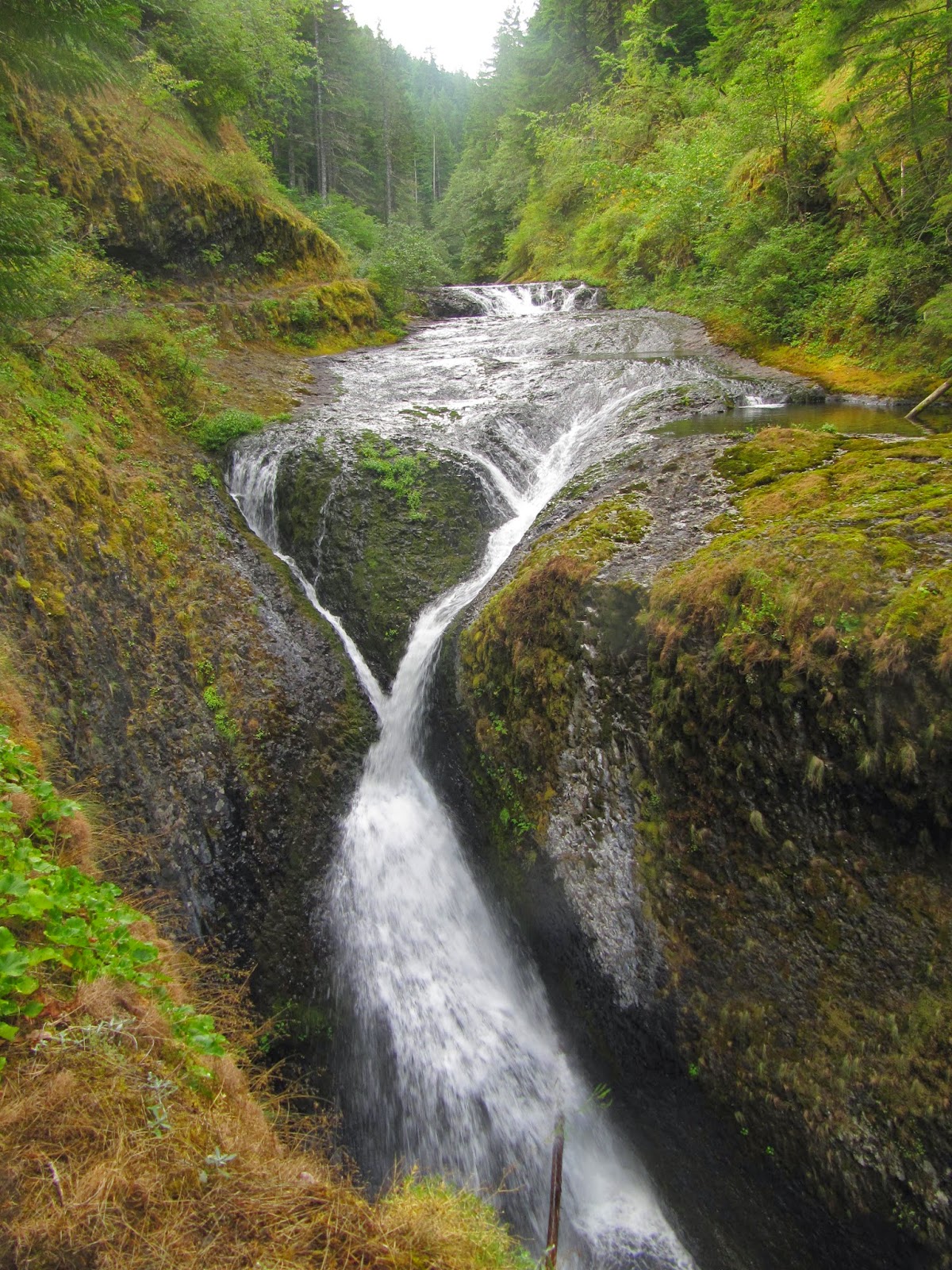 Watching the water flow is mesmerizing. 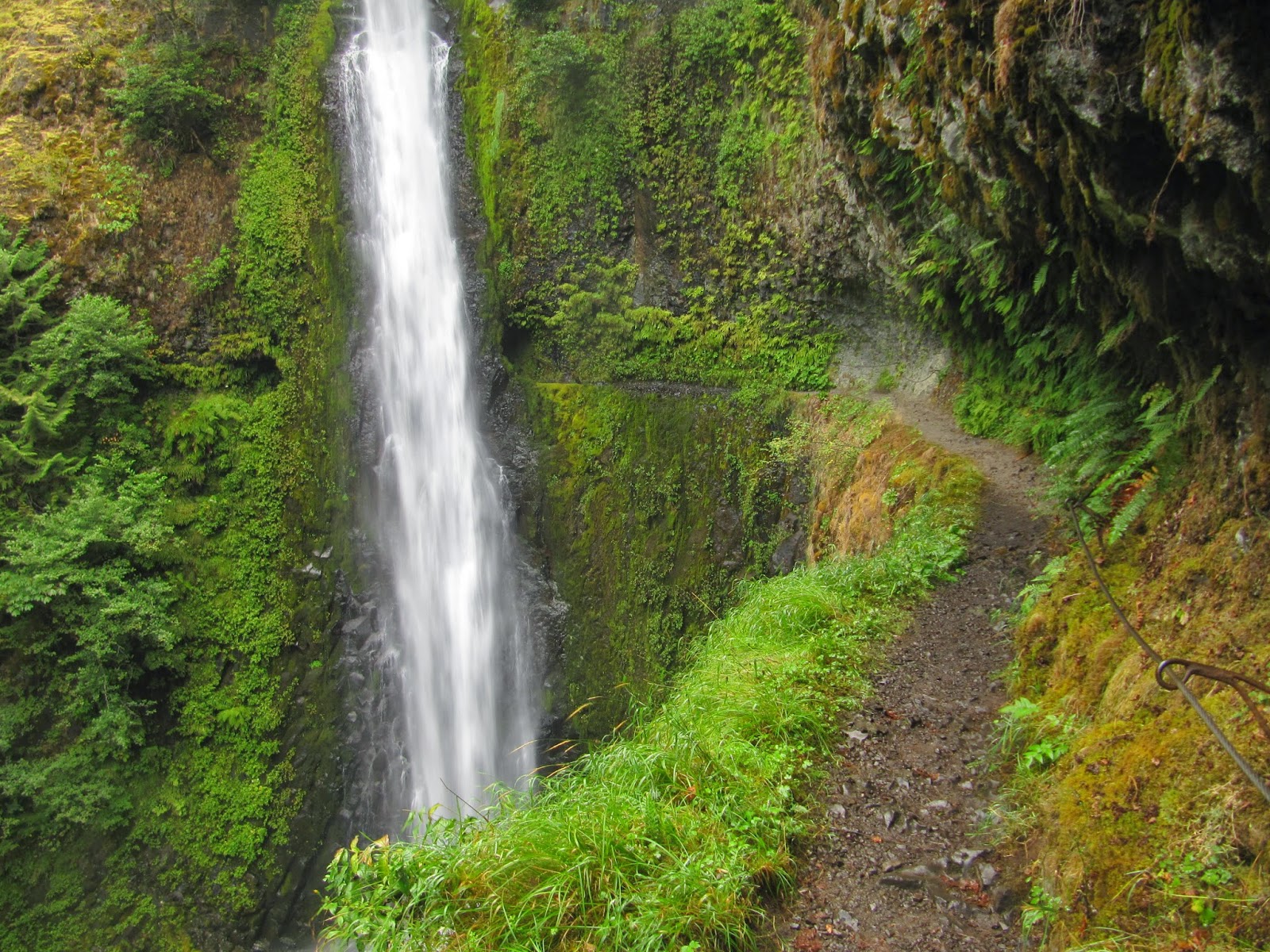 With my camera, it wasn't possible to view the full length of the falls in one setting. I could either capture the top of the falls or the bottom of the falls, but not the entire length. 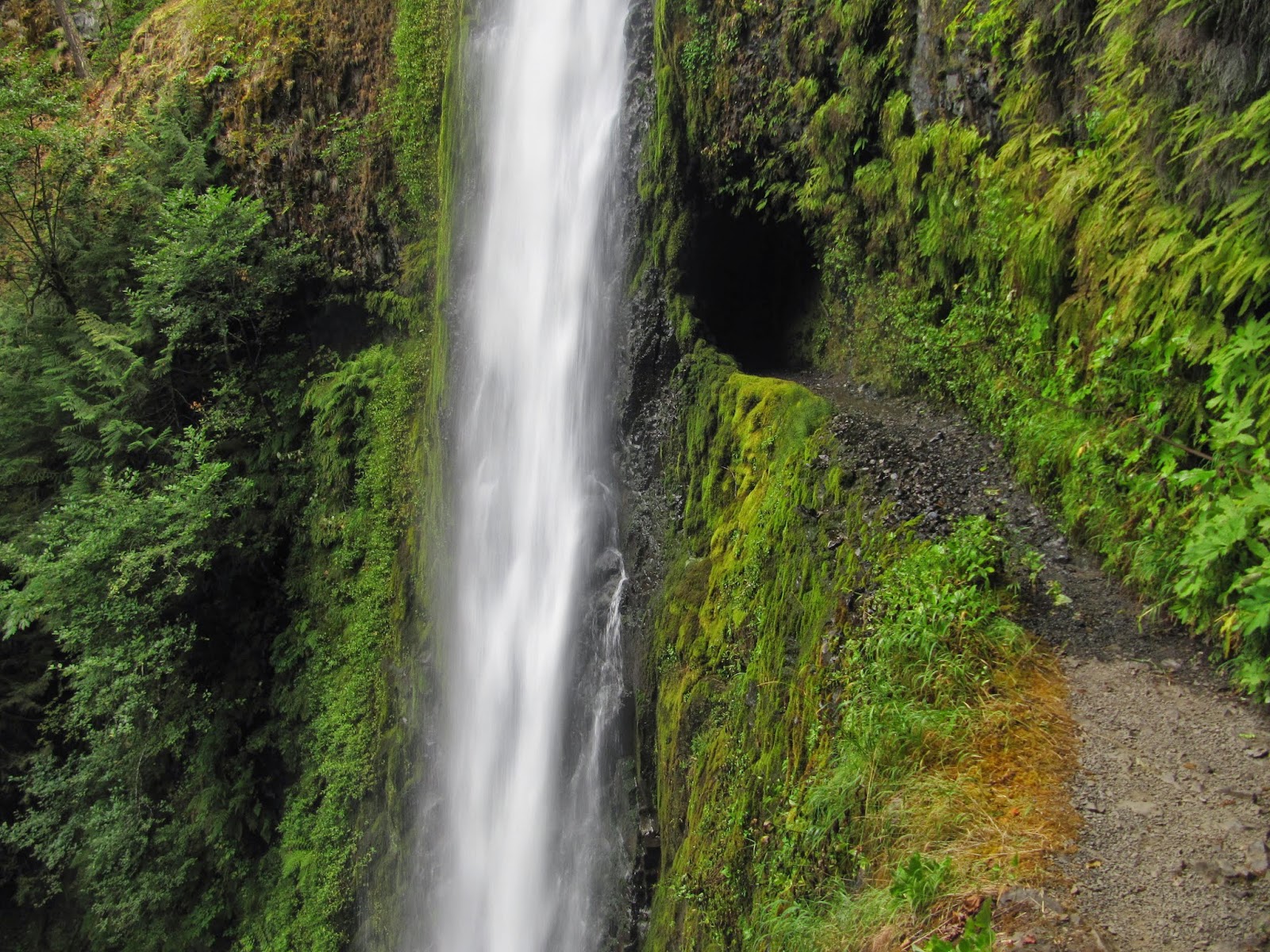 The tunnel behind the falls was purposely carved to give access to the entire trail. 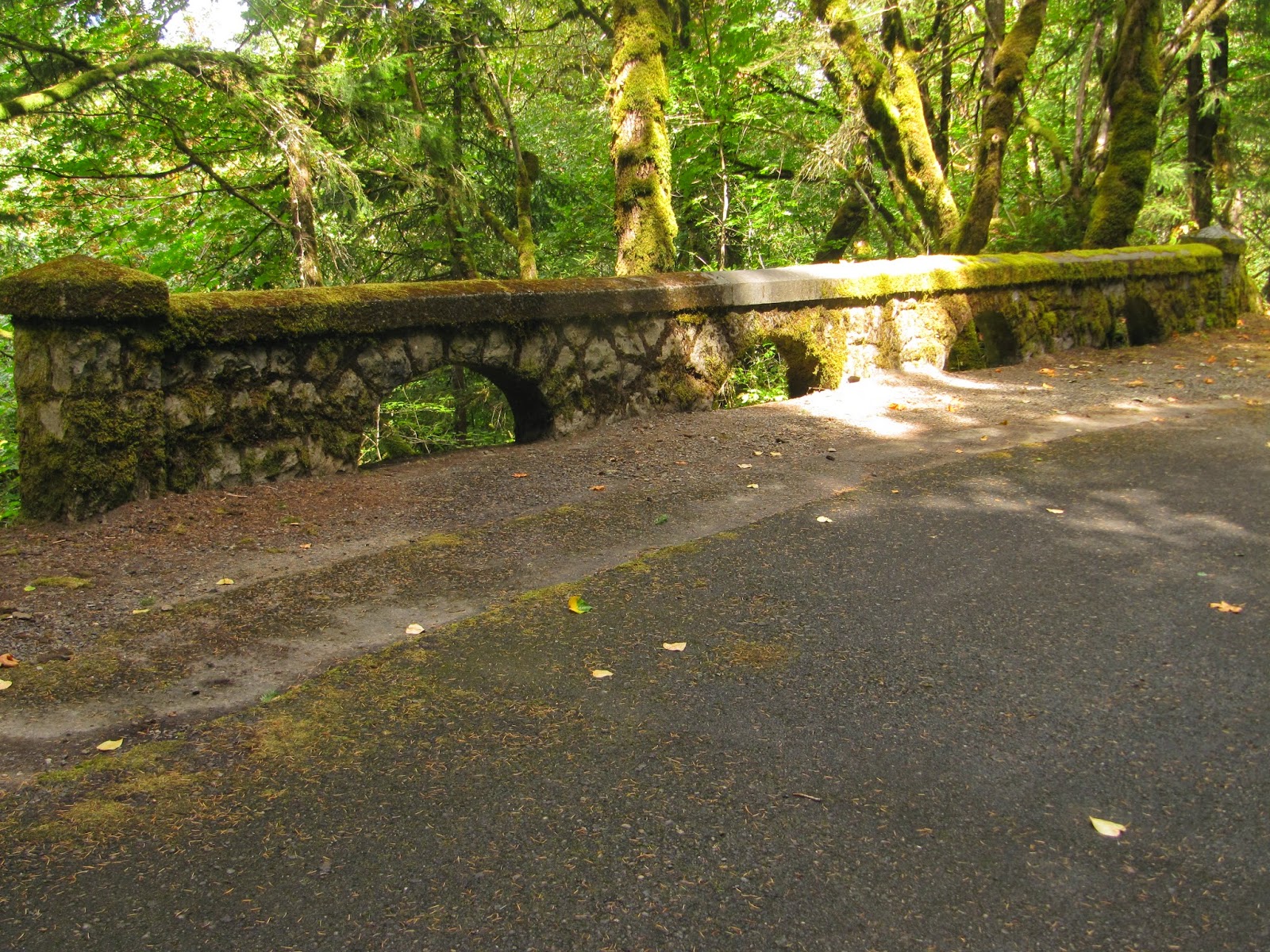 This photo shows the intricate stone work the original builders of the Columbia River Highway applied when the road was originally constructed in the early 1920s. There are only a few sections of this stone work remaining. 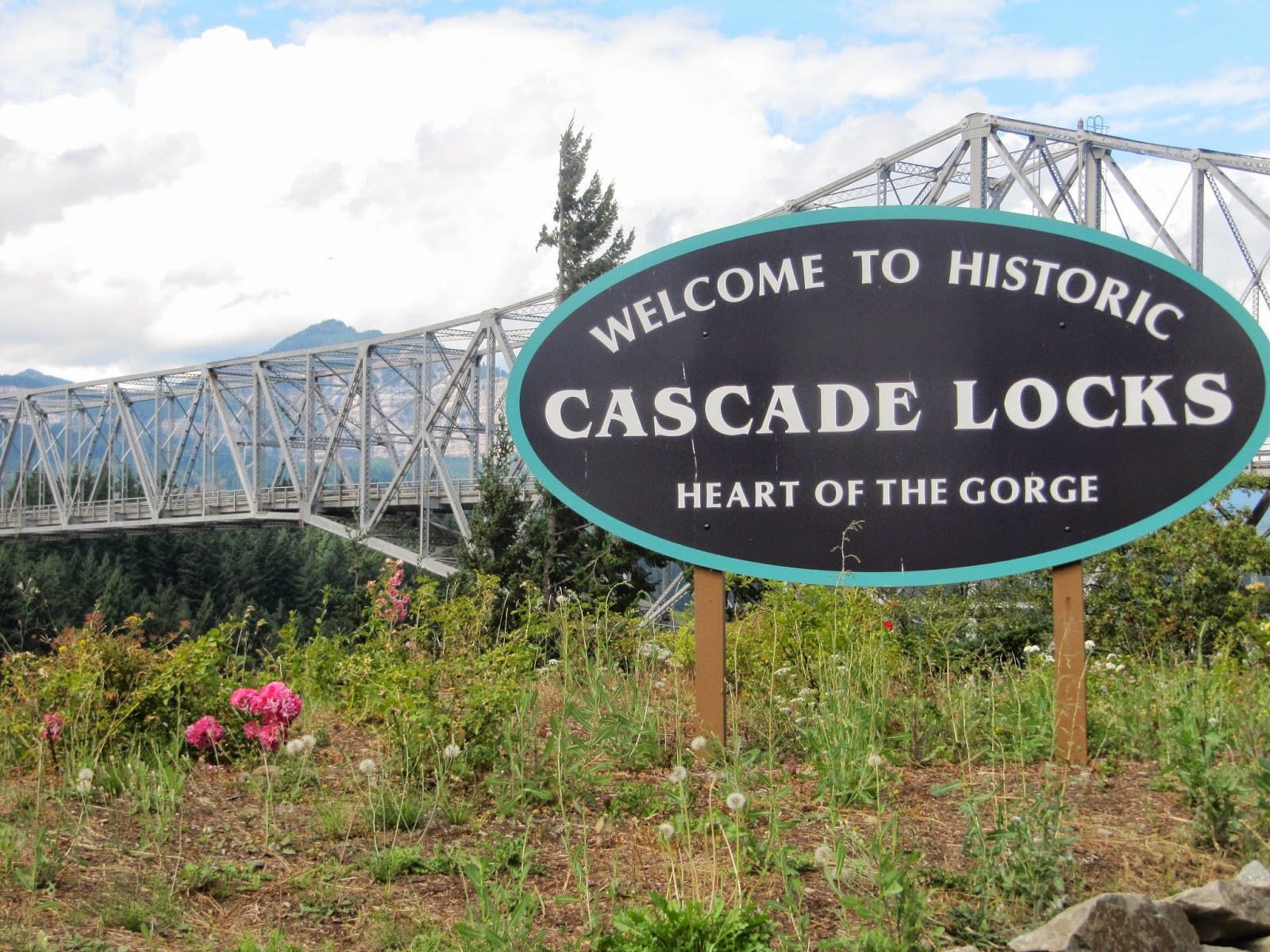 The welcoming sign to the town of Cascade Locks with the Bridge of the Gods in the background.