The only major ascent on the trail today was the climb up the west ridge of Blowout Mountain, but once at the top, it was a relatively easy descent to Tacoma Pass and camp for the night.

Just before reaching Tacoma Pass, I came across a hand-carved wooden sign propped up against a tree that said water, with an arrow pointing in the direction to walk.  I needed water, so I dropped my pack at the spur trail, grabbed my water containers and walked the short distance to the flowing stream, but I neglected to heed my own advice about observing landmarks when leaving the trail.

With water bottles full, I turned around to head back up the trail, and in a frightening moment of déjà vu, I realized that the forest all looked the same, and I was not a hundred percent sure of the way back, even though the faint trail lay before me.  With real trepidation, I moved up the trail, paying close attention to the placement of each foot, to make sure I didn’t step off the spur trail and head in a different direction.  I wish I wasn’t so paranoid about getting lost in the woods, but it’s easy to do and it truly does frighten me.

Within a short distance, I arrived at Tacoma Pass and found a heavily used dirt road, labeled on the maps as Road 52.  A hundred feet from the road was a small sign that said trail magic ahead, and upon reaching the road, I found trail angel Richard Lee who went by the trail name of "Not Phil’s Dad," set up to dispense trail magic.  He had canopies and tarps erected to protect his camp from the rain, which included camp stoves, camp chairs, and food tables; he was serving hot dogs, hot chocolate, fruit, and other snacks.

I greeted Richard and he invited me to sit down and enjoy the services he had to offer.  He was the one who had carved the wooden sign and placed it on the trail that pointed the way to water.  Lounging in camp chairs under the tarps was Biers and Ranch, who had arrived a few hours earlier.  Biers said he was still not feeling well, and might stay another day in camp with Richard Lee.
While I waited for the hot dogs to cook, I visited with Biers, who was from Berlin, and told him about my service as a Mormon missionary in Bavaria, Germany, home to the Munich Oktoberfest from 1962 to 1965.  I couldn’t help but ask him about the grammatical correctness of the famous statement President Kennedy made on his visit to West Berlin in June 1963, when he spoke before a crowd of four hundred and fifty thousand and declared to the populace, “Ich bin ein Berliner,” which translated literally means, "I am a jelly-filled donut."

In Berlin, the citizens don’t refer to themselves as Berliners, as that term is reserved for a confectionary called Berliner - a jelly-filled donut.  I asked Biers if Kennedy was correct in using the term the way he did, or if it would have been more correct to say, “Ich bin Berliner,” – interpreted to mean, “I am a citizen of Berlin.”  Biers said that even though the crowd had a good chuckle about the expression, they understood the intent and were very appreciative of the support the American people were displaying to the beleaguered citizens of West Berlin, who, at the time, were surrounded by the Soviet-backed East German government, a government who just months before had erected the Berlin Wall.

In the thirty months I lived in Bavaria as a missionary, I served in three different cities – Munich, Schweinfurt - which interpreted means Pigs Crossing, and Coburg, on the East German border.

Schweinfurt was the location for several ball-bearing factories, which were vital to the Nazi war effort; subsequently, the city was repeatedly bombed during the war, and even eighteen years after the conflict, when I was there, there was still massive war damage to be seen around the city.

Coburg was renowned for its world-famous Hummel figurines which were produced in factories in the city, and although the city was the first to fly the Nazi flag on an official building in 1931, the city had no heavy industry or strategic value for the war effort, and thus escaped relatively unscathed from aerial bombardment or fierce tank battles.

After the defeat of Nazi Germany in 1945, the allies divided Germany into four sections – the British in the north, the Americans in the south, and the Russians in the east.  Eventually, France acquired a section in the far west from territory ceded by the British and the Americans.

East Germany, under Russian control, was named the German Democratic Republic, or GDR, while the British, French, and American sectors unified and became known as the Federal Republic of Germany or FRG.  Up until 1952, the border between the two opposing ideological governments was quite porous, but in that year, it all changed.  The GDR, under the pretext of keeping out spies and foreign undesirables, began to fortify their border from the Baltic Sea in the north to the Czechoslovakian border in the southeast.

The border was defined by minefields, watchtowers, automatic booby traps, anti-vehicle ditches, alarms, high-metal fences and walls and barbed wire, plus fifty thousand troops.  In reality, the East German government was trying to stem the heavy exodus of East German intelligentsia to the west.

Living in Coburg in 1964, and so close to the border, I and several other American missionaries decided to ride our bicycles to the border, to see what it actually looked like.  We saw the usual border signs that said,

Streets that formally had continued north were blocked by concrete barriers or earthen berms; the railroad lines had been cut; three barbed wire fences stretched forever, in both directions; a no-man’s land, studded with mines, lay between the second and third fences, and guard towers had been erected every six hundred feet. In the distance beyond the guard towers, we could see farmers working in their fields.  Undoubtedly, those people had many friends, family, and relatives living in Coburg who they hadn’t seen in years.  It was quite impressive, and for a nineteen-year-old kid still wet behind the ears and just a year out of high school, it was an unprecedented eye-opener to the realities of world politics. Trail angel Richard Lee, also known by the trail name, "Not Phil's Dad," a kind and gentle man with a big heart. Thanks Richard for your service. 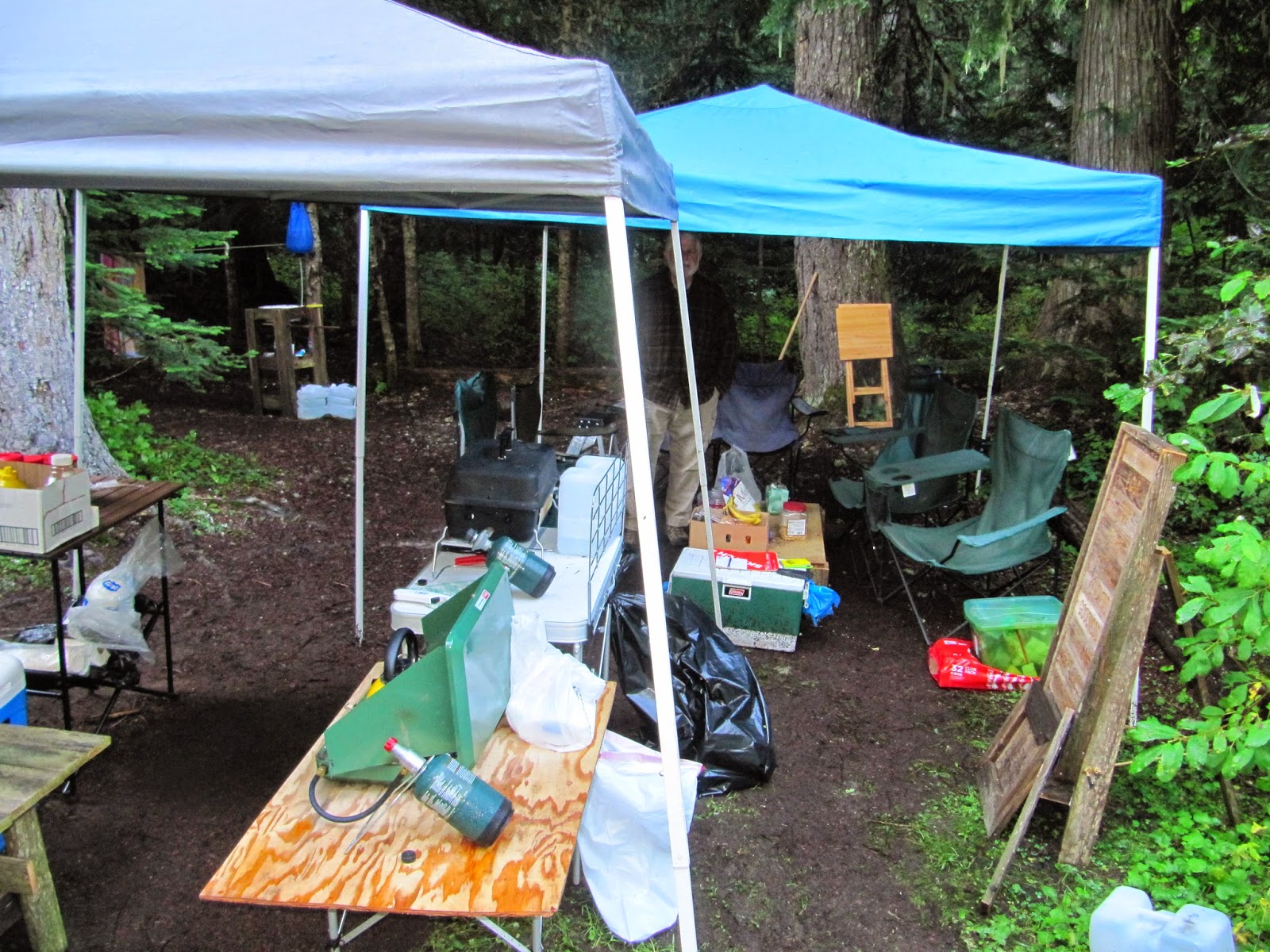 Richard Lee's camp set up beside the road at Tacoma Pass.