I ventured an educated guess that it would not rain tonight, so I didn’t bother putting my tent up; I just spread my ground cloth on the grass and placed my air mattress and down quilt on top of it.  I should have put my tent up, for although it didn’t rain, the dew was so heavy that everything I had on the ground was coated with droplets of water, and all clothing items were soaked. had hoped to do twenty miles today, but called it quits at eighteen and a half miles.  There were not a lot of areas conducive to camping, and when I rounded a hill and saw a bright blue tent set up in a meadow I concluded that I would camp in the same meadow

During the night, I awoke to sounds of footsteps on the trail, heavy thudding footsteps.  I grabbed my headlamp to see if I could see the source of the disturbance, but saw nothing.  I concluded that the noise was from the pounding feet of several elk walking the trail, and in the morning when I took to the trail again, I could see the hoof prints in the dirt of these large creatures.

I was on the move at five thirty this morning.  I’m trying to convince myself that there’s no longer a need to get up any earlier than 5:00 a.m.  Today was going to be a special day as I would be coming into the Goat Rocks Wilderness, described in guidebooks and lauded by trail journals as one of the most spectacular rock and geological formations along the entire Pacific Crest Trail.

All day it was a steady climb upward and around every corner of the trail I kept hoping to catch my first glimpse of the long, jagged ridge of volcanic rock streaked with snow and glaciers set against the skyline that would announce the entrance to the enchanted land of the heavily glaciated canyons of Goat Rocks Wilderness.  I question every day hiker I met coming down the trail about the closeness of the rocks, and they all said,

“It’s not much farther.”

Finally, at mile 2,278, I was able to get my first full view of the wall of the Goat Rocks, so named for the numerous white woolly goats that inhabited the area.  Two miles farther up the trail after a steady climb I crossed over Cispus Pass and began the long walk beneath the Goat Rock wall until I reached Snowgrass Flat where I rested for a moment.  While I was checking my maps, Brownie walked up the trail behind me and visited with me.

We both commented on the ruggedness of the open treeless terrain surrounding us, which was in stark contrast to the dark forests we have been used to walking through for so many days. As the two of us continued up the trail, we passed a large camp which was set up just off the trail.  There were several large community tents as well as smaller hiker tents, and it was obvious that the campsite was not for backpackers.  We learned later that the camp had been set up for a trail maintenance crew sponsored by the Pacific Crest Trail Association.

After leaving the Forest Service employee, we immediately encounter the area where the trail maintenance crew had been working.  It was a heavily eroded slope with loose rock that was continuing to move down the mountain.  In areas, the movement had obliterated the trail and the crew was seeking to stabilize it.  They did have their work cut out for them.

Within a few hundred yards, we came to a trail junction at the bottom of Old Snowy Mountain.  The official PCT went up the mountain to reach the highest point on the PCT in Washington at an elevation of 7,620 feet, while the other trail was identified as the equestrian trail.  It was late, it was getting dark, rain was threatening, and we had no place to camp; thus, neither of us had any desire to keep to the official PC Trail.  We chose the horse trail and continued moving around the base of Old Snowy.

The trail continued over loose rock that was very unstable; I had to pick my way through very carefully so as not to stumble and fall down the mountain.  I was swinging my trekking poles in front of me to help maintain balance, when the left pole flew out of my hand and slid forty feet down the mountain.  Not good, not good at all.  I yelled to Brownie to wait for me, as I had to leave the trail and try to retrieve my trekking pole. 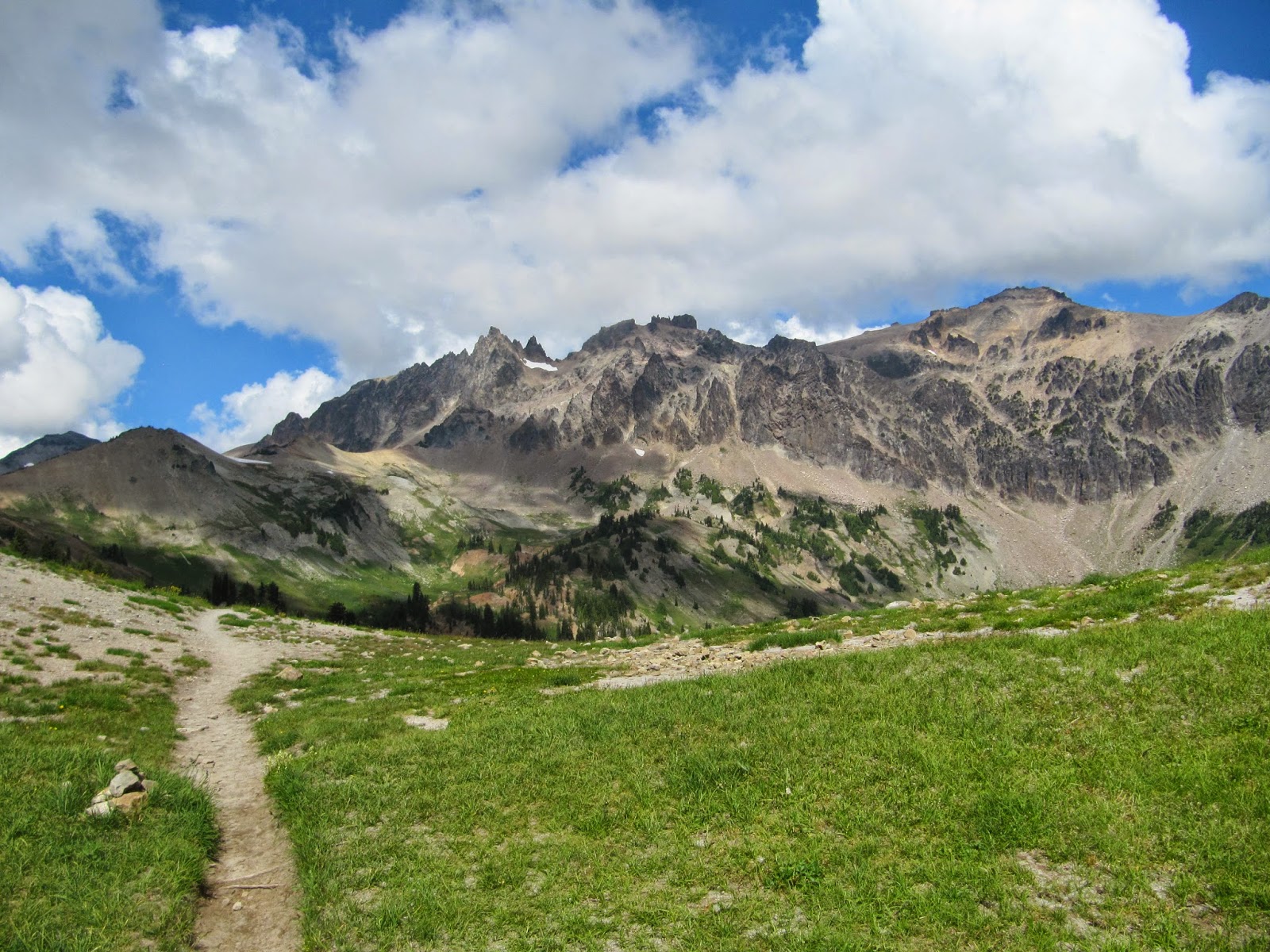 The Goat Rocks in all their majesty. Undoubtedly some of the greatest scenery since the Sierras in California. 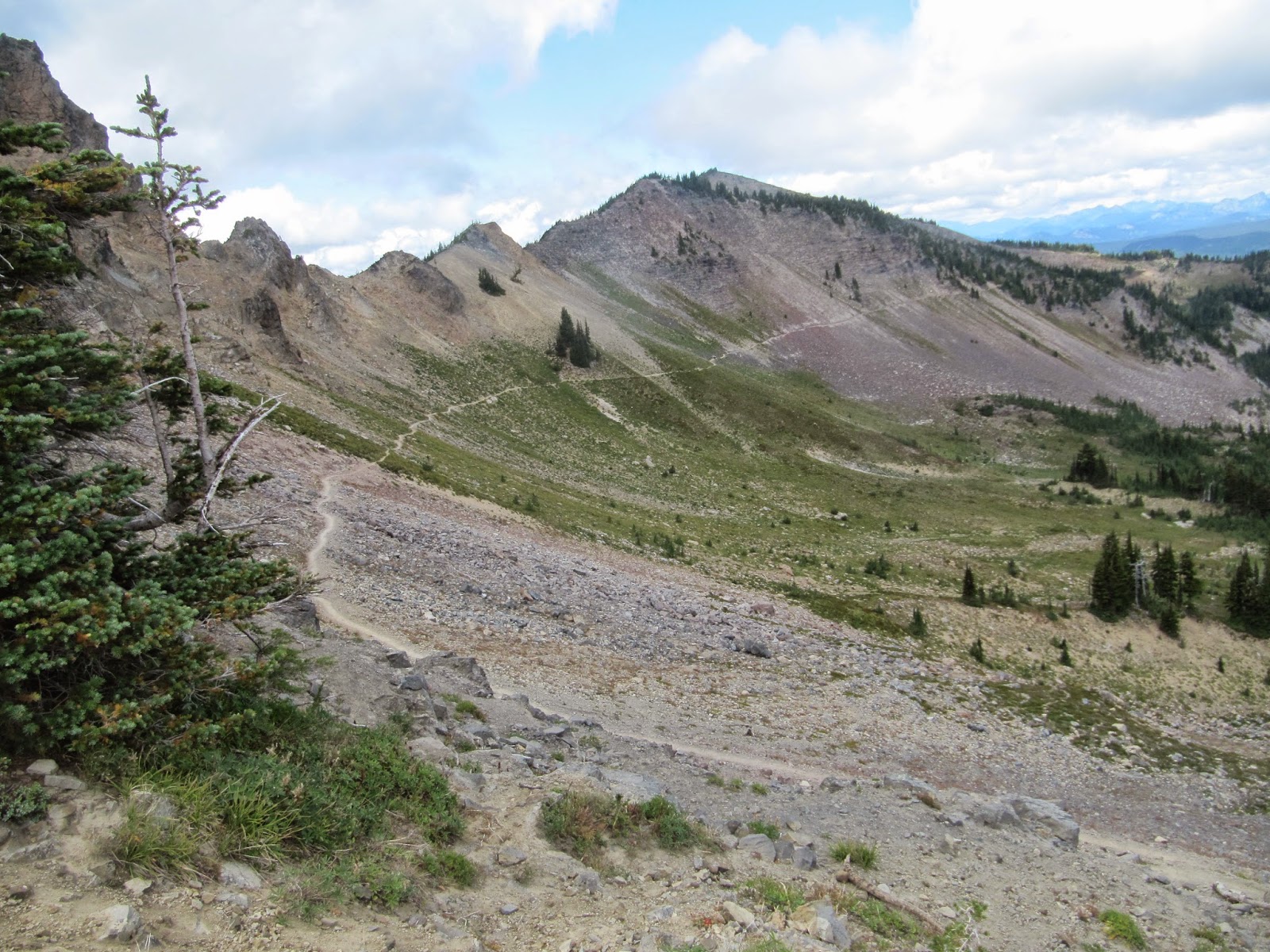 When above tree line, the trail can be seen for miles as it moves along the ridge line. 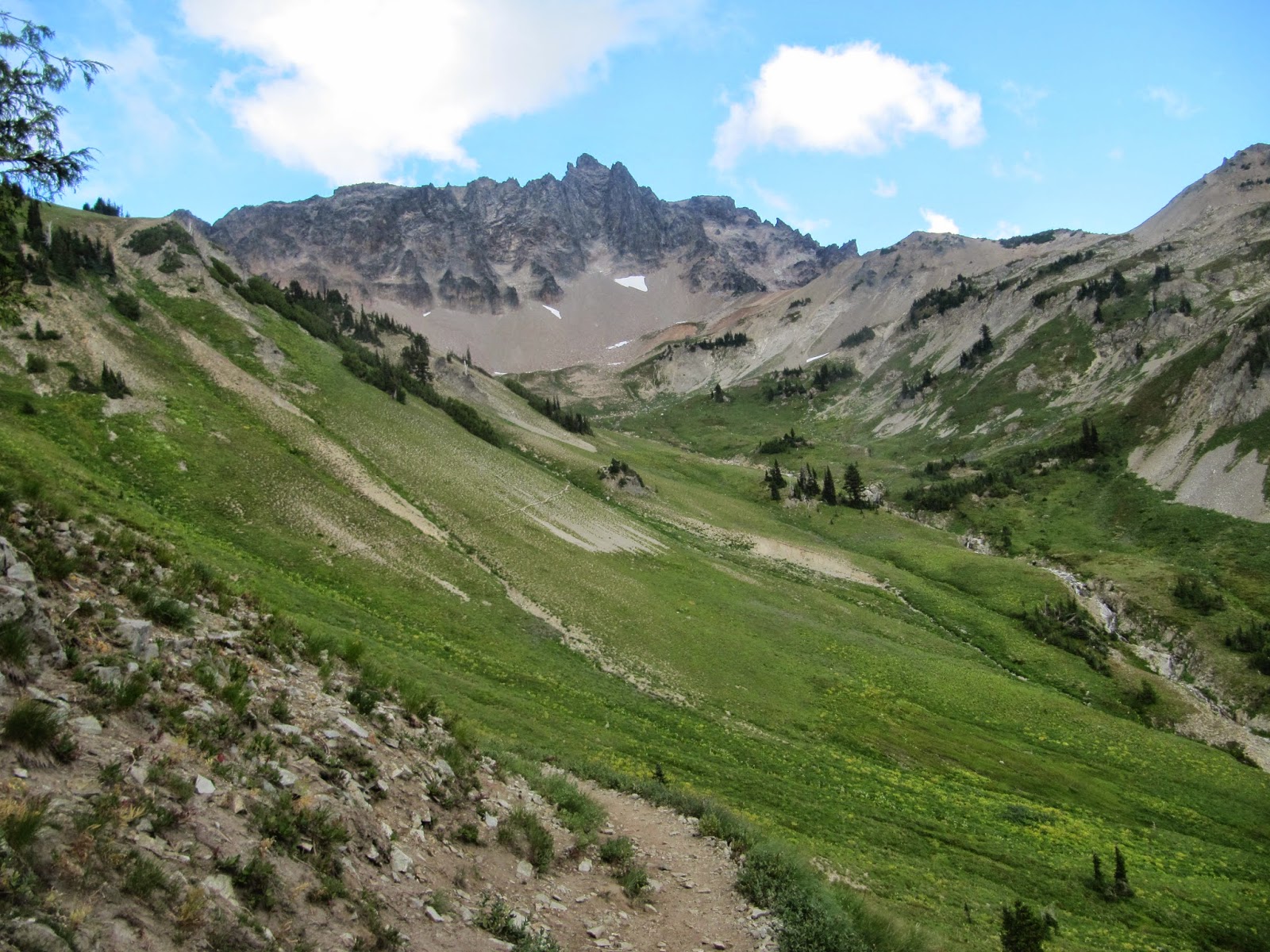 Goat Rocks is named after the many mountain goats (they're white, versus mountain sheep which are brown) that inhibit this area. In all, I spotted eight goats. 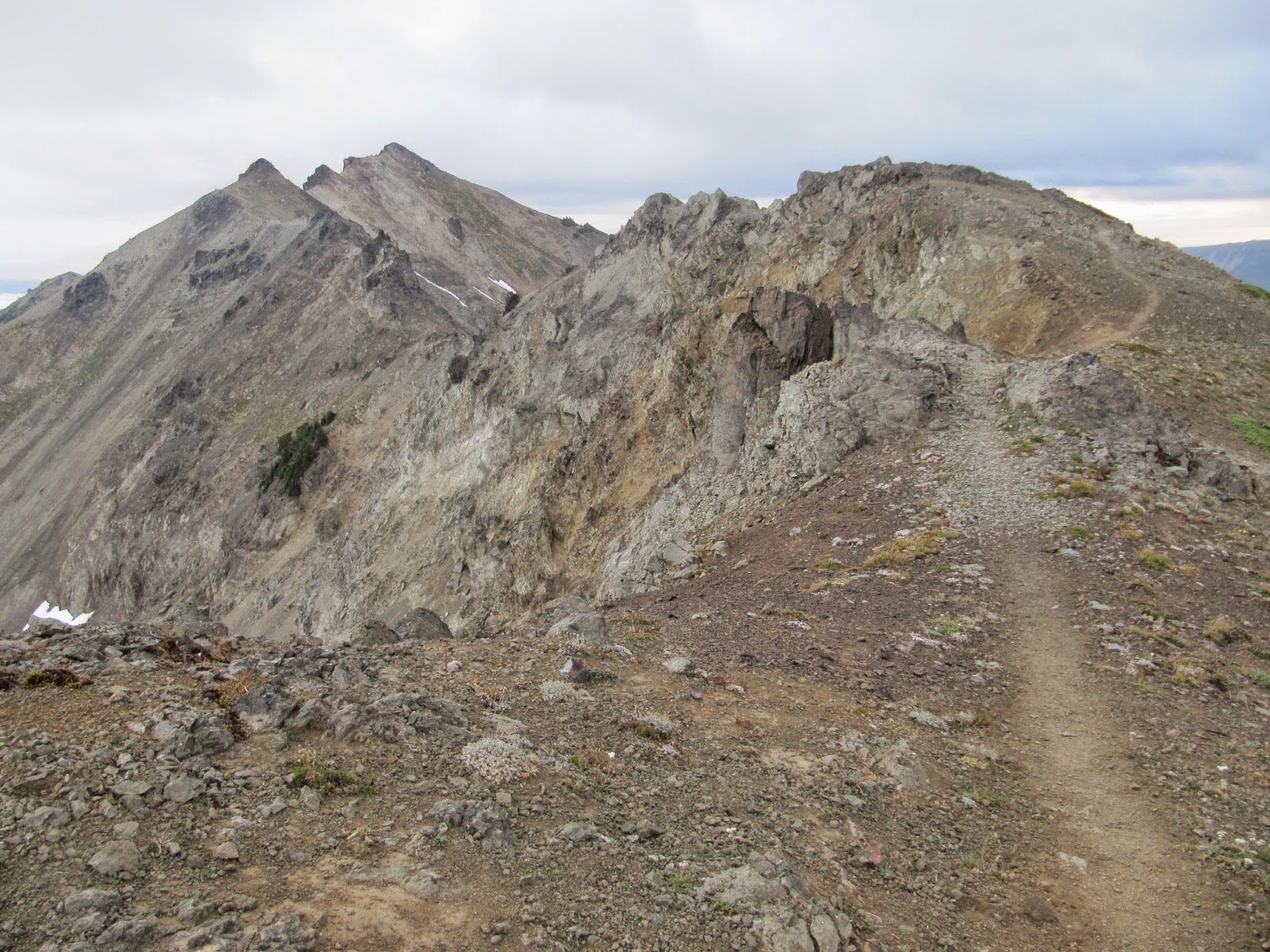 This is the infamous Knife Edge of Goat Rocks. There are only a few minutes of daylight left and Brownie and I are not finding a place to camp. To continue hiking farther would put us in treacherous terrain, in the dark. 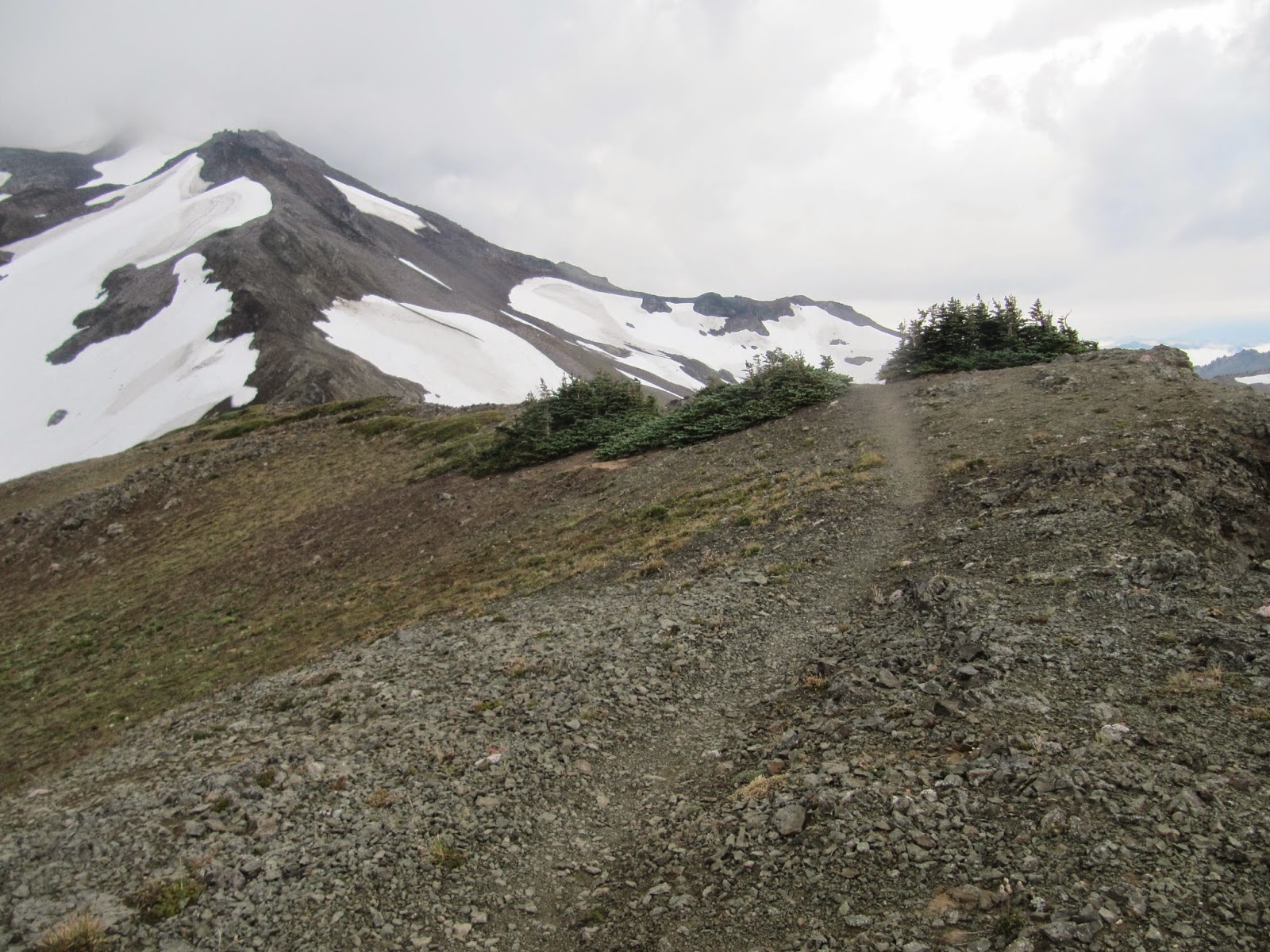 Approaching the part of the Goat Rocks known as Ol' Snowy. The actual trail goes up to the summit of the mountain in this photo and then down the other side. An optional horse trail goes around the base of  Ol' Snowy. Because of the lateness of the day, Brownie and I chose to take the horse trail. 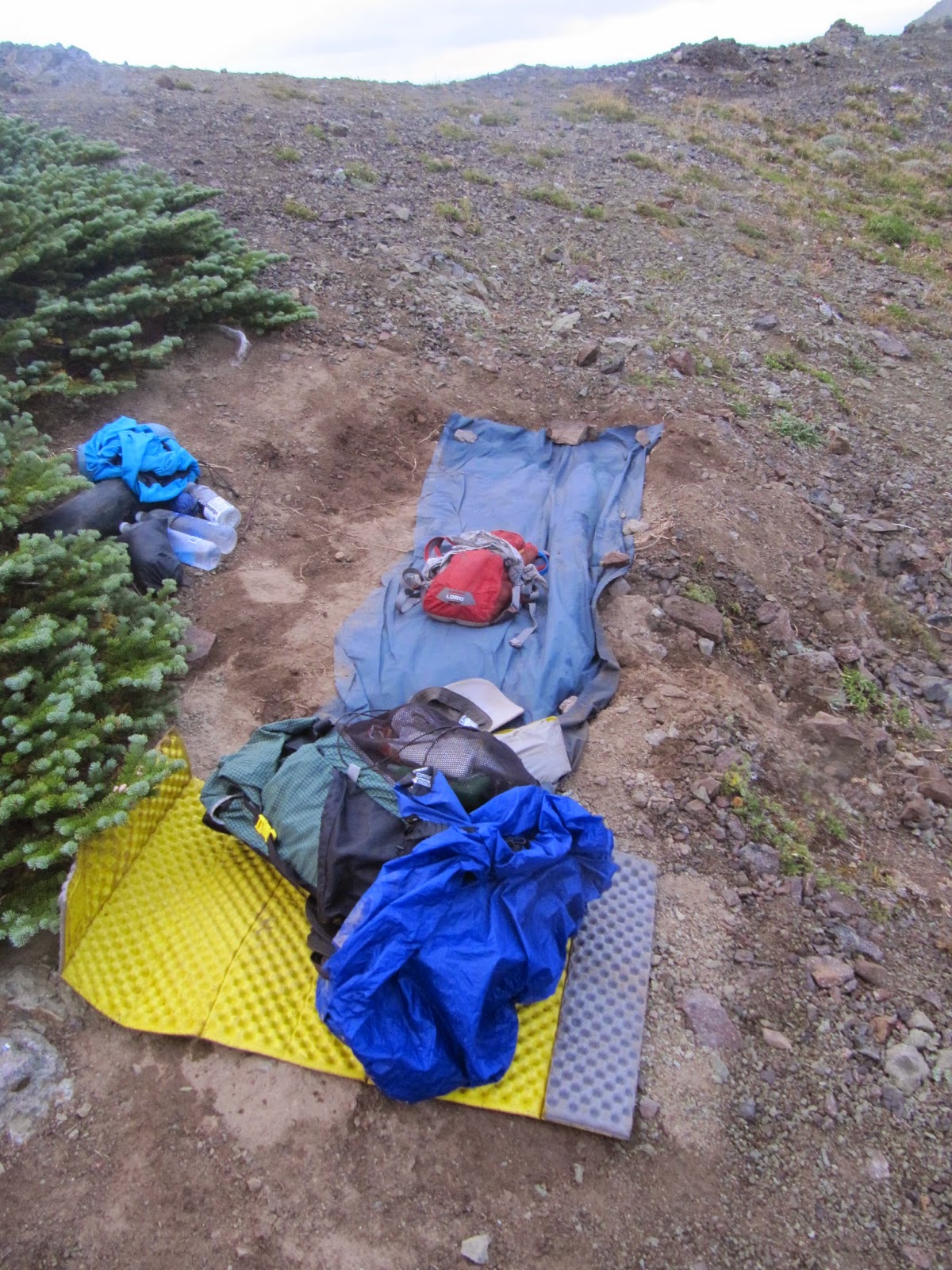 Out of desperation, I chose this small flat place on the side of the hill to construct a place to lay out my bed roll. It wasn't big enough to erect my tent, and of course it rained during the night. Brownie went down the hill and found a small, flat place to erect his tent. 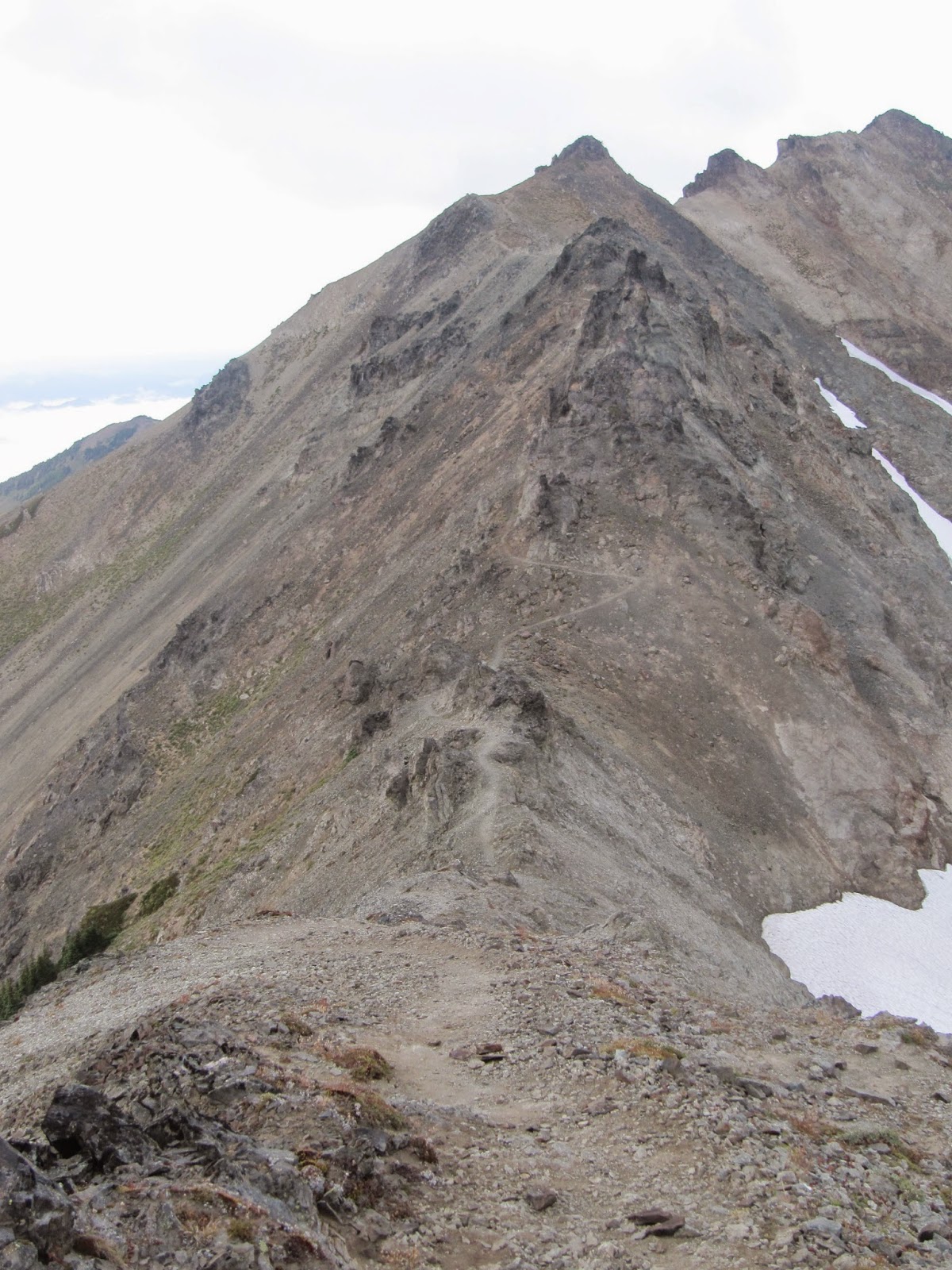 Now it's time to walk the Knife Edge. After climbing the spine of the ridge, the trail courses along the left side of the mountain. 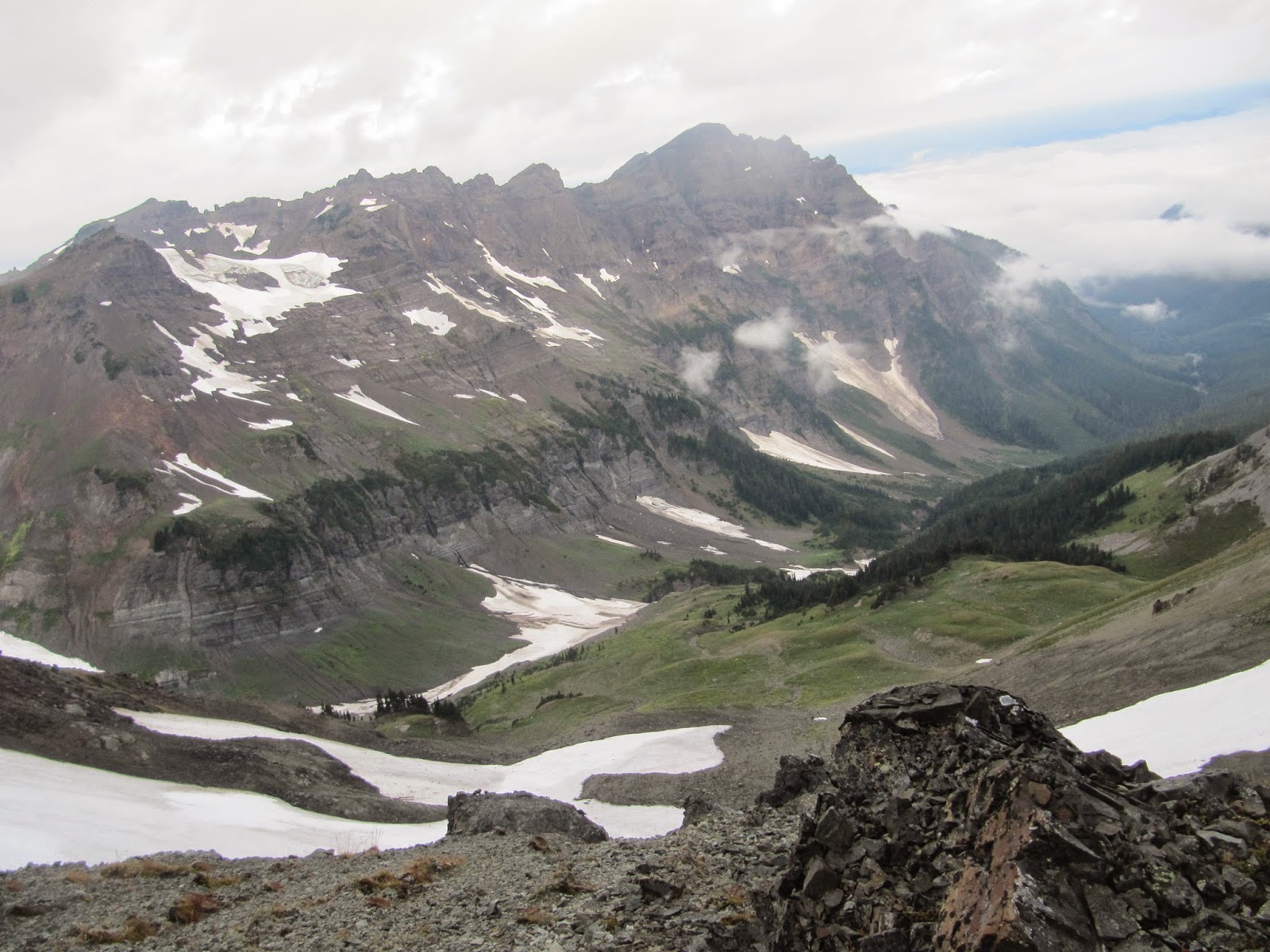 From the Knife Edge, I stop to gaze at Upper Lake Creek Canyon below. While I watch, clouds and fog move fast, up the valley, completely engulfing it and then pour over my position on the trail, and flow down the mountain on the opposite side. Fascinating to watch.

The same valley as above, now filled with clouds. 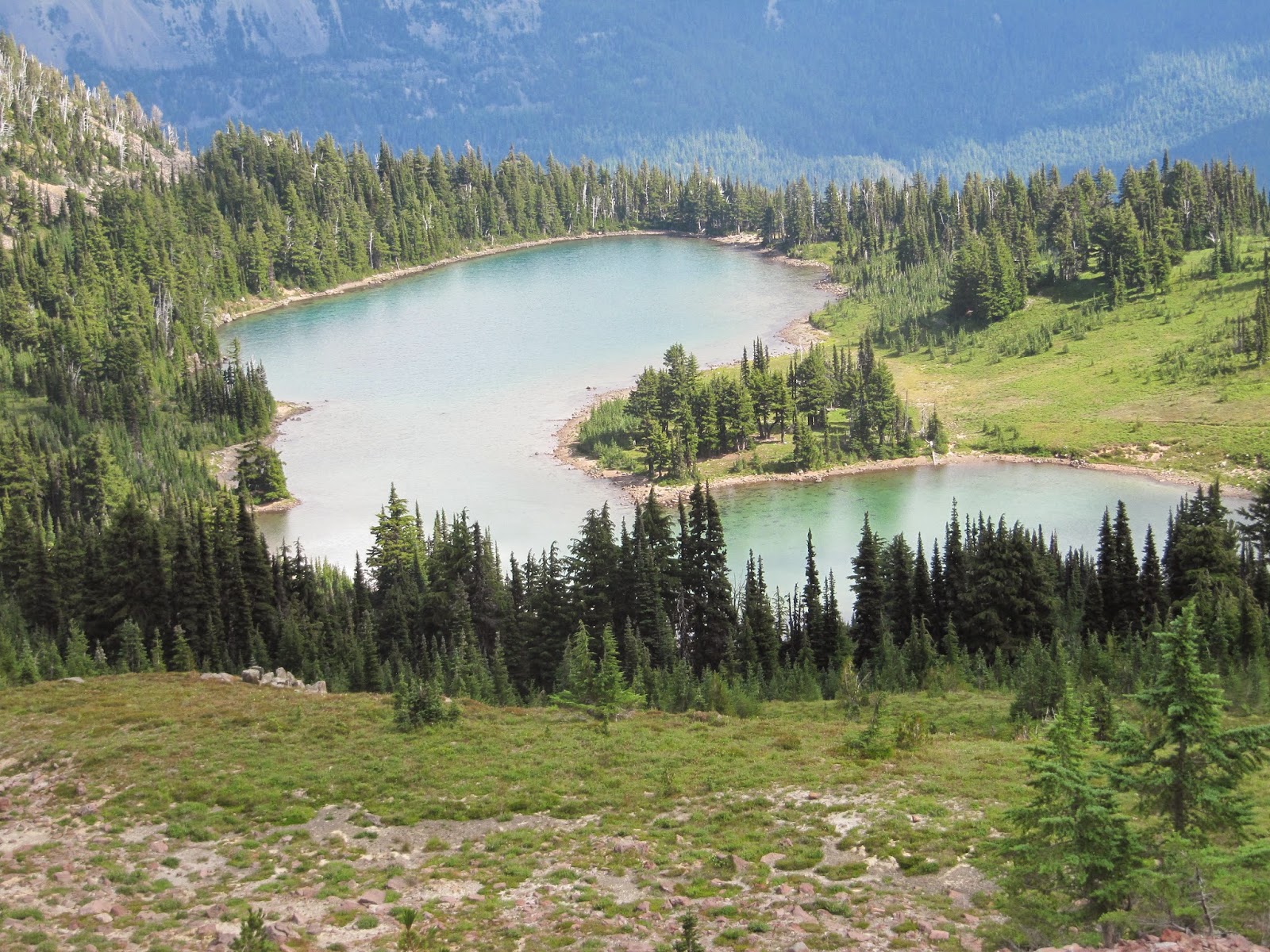 On the down hill side of Goat Rocks heading for White Pass, a small ski resort on the side of the highway. 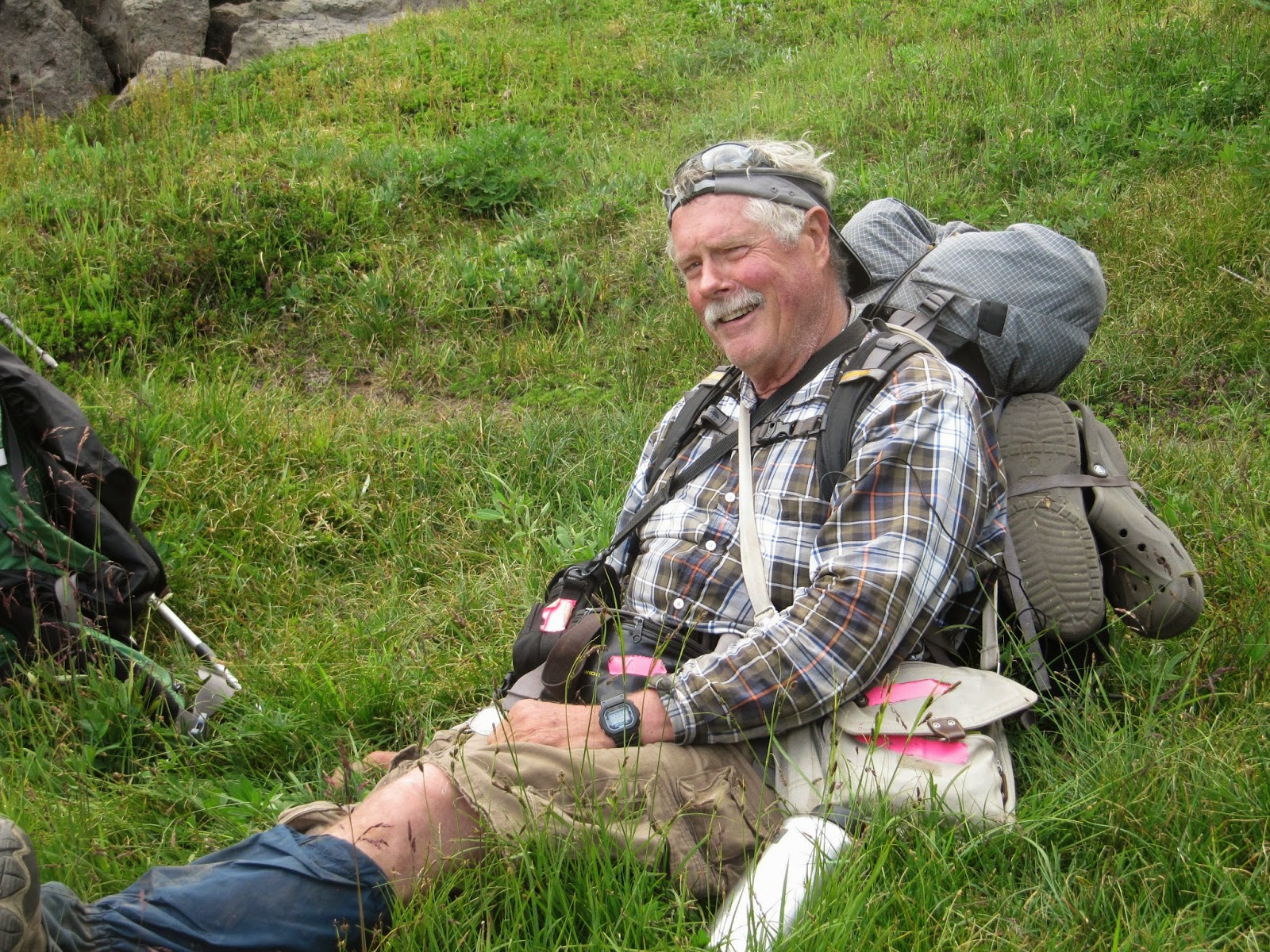 Hulk stopping to rest while he lets his two donkeys graze on the lush grass. 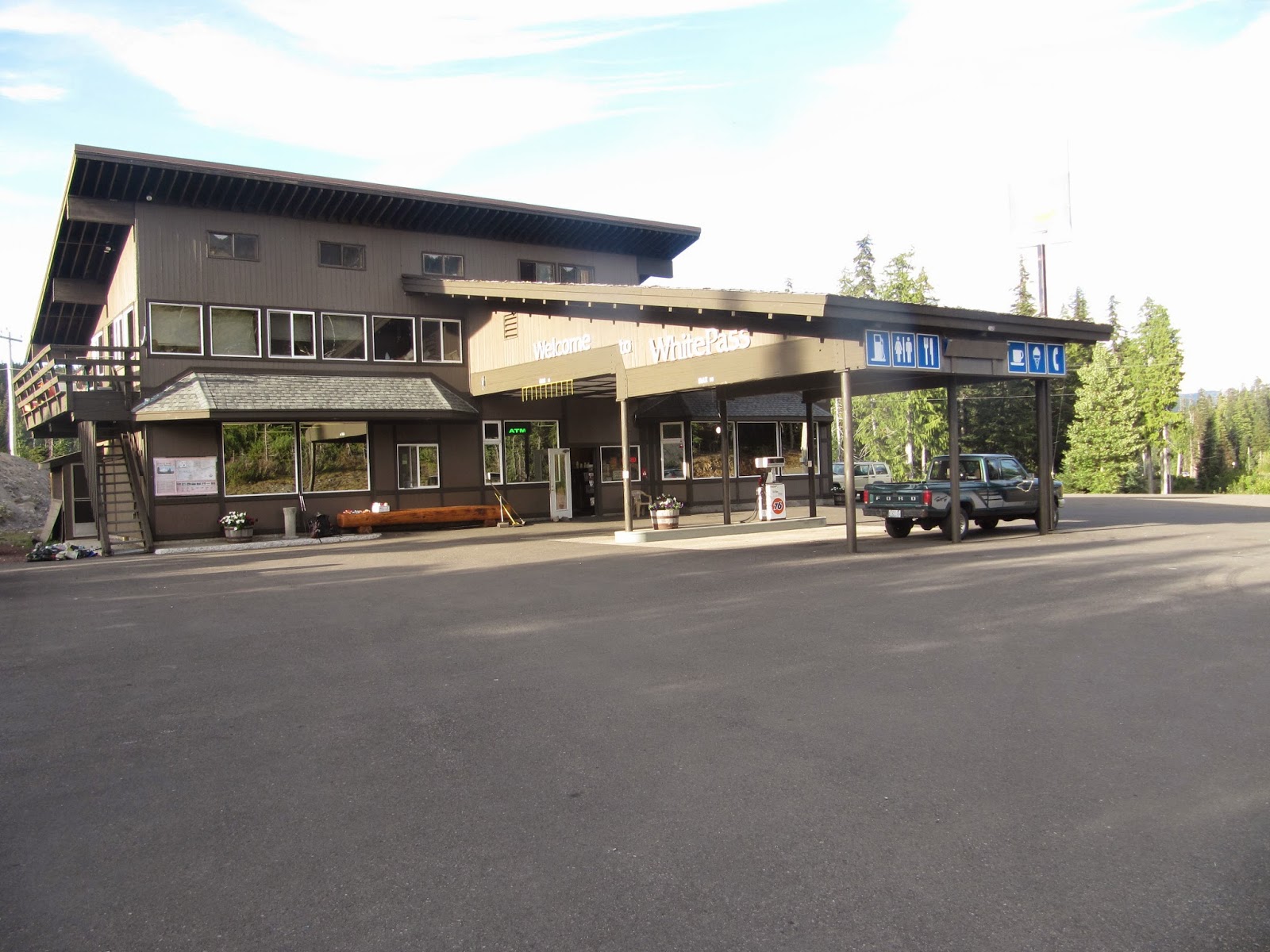 The Kracker Barrel store.  Besides the White Pass Resort Inn next door, where Brownie and I stayed the night, this is the only structure at the summit of White Pass. Hikers can retrieve their resupply boxes here, and buy junk food at the convenience store.
Posted by Richard Jones at Wednesday, August 21, 2013