The trail leading away from the lodge was filled with day hikers, a ton of them. Most would only walk a short distance before turning back, while a few would go as far as the first stream crossing at Sandy River before calling it quits.

The Sandy River bottom was covered with boulders and bushes, and in a flood-stage situation, the river could be as wide as three hundred feet, totally obliterating the trail.  Today, the river crossing was only twenty feet wide, but the water, being fed by glacial melt from Mount Hood, was a milky white color, several feet deep, and flowing fast.  I walked up and down the bank, trying to find a safe place to cross; it was not going to be an easy boulder hop, and I didn’t want to wade across it, as the riverbed was filled with large boulders, making for a dicey crossing.

While I was looking for the ideal crossing, two other hikers appeared on the banks of the river; they were section hikers and one fellow had hiked this portion of the trail before.  The two walked downstream from where I was standing, and found three very skinny logs that had been placed over the widest part of the stream.  I watched as they cautiously stepped onto the logs and, while holding their trekking poles out to their sides, crossed safely.  I followed close behind and also made a successful river crossing.

There were several branches of the river, and after crossing all of them, I followed the footprints in the sand of others who have gone before me hoping they will lead me to the trail, but in the heavy brush, I lost the footprints. Flood waters had erased any vestiges of the trail, and I was at a loss as to its location.  Fortunately, the section hiker who had been here before, was able to locate the trail when it left the streambed and climbed an embankment to higher ground above the river.
Within a mile of the river crossing, I came to a trail junction that led to a scenic attraction labeled Ramona Falls on the signpost.

My map indicated that it was a loop trail that reconnected with the PCT farther up the line.  The maps also indicated that the loop and the falls were quite scenic and about the same distance as the official PCT route.  I stayed with the PCT; later, from others who took the alternate route to Ramona Falls, they said they weren’t that impressed with the falls, but to each their own
.
The next stream crossing was at lower Muddy Fork; the stream was flowing fast and deep.  I don’t know if the crossing I made was at the official crossing, but nevertheless, I was just happy to have crossed without incident.

The crossing itself consisted of two very stout trees that had fallen across the stream, about twelve feet above the water.  One tree was a few feet higher than the lower tree; therefore, I was able to walk on the lower tree, and while embracing the upper tree, shuffle along holding on for dear life to the upper tree.  The hardest part of the crossing was scrambling over the tangle of roots before I could jump off the tree onto solid ground.

Following this stream crossing, I began a very slow thirteen-hundred-foot climb to the summit of Bald Mountain and then on over to the paved highway at Lolo Pass.  All the while, the trail stayed high on the ridges overlooking the valleys below.  I wanted to make Indian Springs Campground my campsite for the evening, but I wasn’t sure where it was.

My trail notes said it was at the end of a four-wheel Jeep road, so that was what I was looking for. However, several miles before finding the actual campsite, high on a barren ridge, I stumbled upon the remains of an abandoned road with small rock shelters that hikers had erected to protect themselves from the wind.  I thought this might be the Indian Springs campsite, but after looking around for the alternate trail that went down Eagle Creek, I concluded this wasn’t the right place.  Shortly after coming off this ridge, I did encounter a well-used Jeep road with a wide turnout at the head of the road, along with several picnic tables, and quickly deduced that this was the Indian Springs Campground I was looking for.

There was no one around when I arrived, so I had the place to myself.  Off to one side of the campground was a bed of straw that looked to be the ideal place to set up my tent, as rain was threatening.  I set it up, and then went looking for the spring, which wasn’t hard to find.  I filled my water containers, ate a meal of freeze-dried Mountain House beef stew, and called it a day.
During the night, someone came in and set their camp up next to mine.  The next morning, I looked to see if I could recognize who the late-night visitor was, but only found a body curled up inside a sleeping bag, lying against a tree with a tarp over the bag.  My impression was that it was Hooligan, but I was never able to confirm this.  As I was packing up my gear getting ready for departure, I detected an unpleasant odor; the straw on which I have been sleeping smelled like horse urine, and probably was.

The Indian Creek Campground was the dividing point between the official PCT and the highly recommended scenic Eagle Creek alternate trail, which most PCT hikers will take to connect with Cascade Locks on the Columbia River.  This fifteen-and-a-half-mile alternate trail bypassed sixteen and a half miles of the PCT, but not taking this alternate trail would mean the thru-hiker, who has labored for 2,155 miles, would miss one of the most spectacular sections of the entire Pacific Crest Trail.

The Indian Creek trail was a steep, muddy, slime and moss-covered section of trail that connected with the Eagle Creek trail after two miles of slipping and sliding.  Hikers only want to do this portion of the alternate trail if they’re southbound; no way would a hiker ever, and I mean ever, want to try and climb this trail northbound with a full pack.

After the Indian Creek trail connected with the Eagle Creek trail, the gradient was more gentle and the hiking more pleasant.  Eagle Creek is a tributary of the Columbia River and entered the river via the Eagle Creek Gorge.  Eight major falls are found within the confines of the gorge and another five are located in side canyons.  The most famous of the falls is Tunnel Falls which derived its name from the tunnel the trail builders blasted in the rock to allow the trail to go behind the falls. The trail approaching Tunnel Falls had also been blasted out of the sheer cliff of lava rock, and is not for the faint of heart.  Sections of the trail before and after the falls have metal rods driven into the solid rock which are connected by cable to provide a handhold for hikers to hold on to who may otherwise feel nervous and insecure about traversing the sheer drop-off trail. 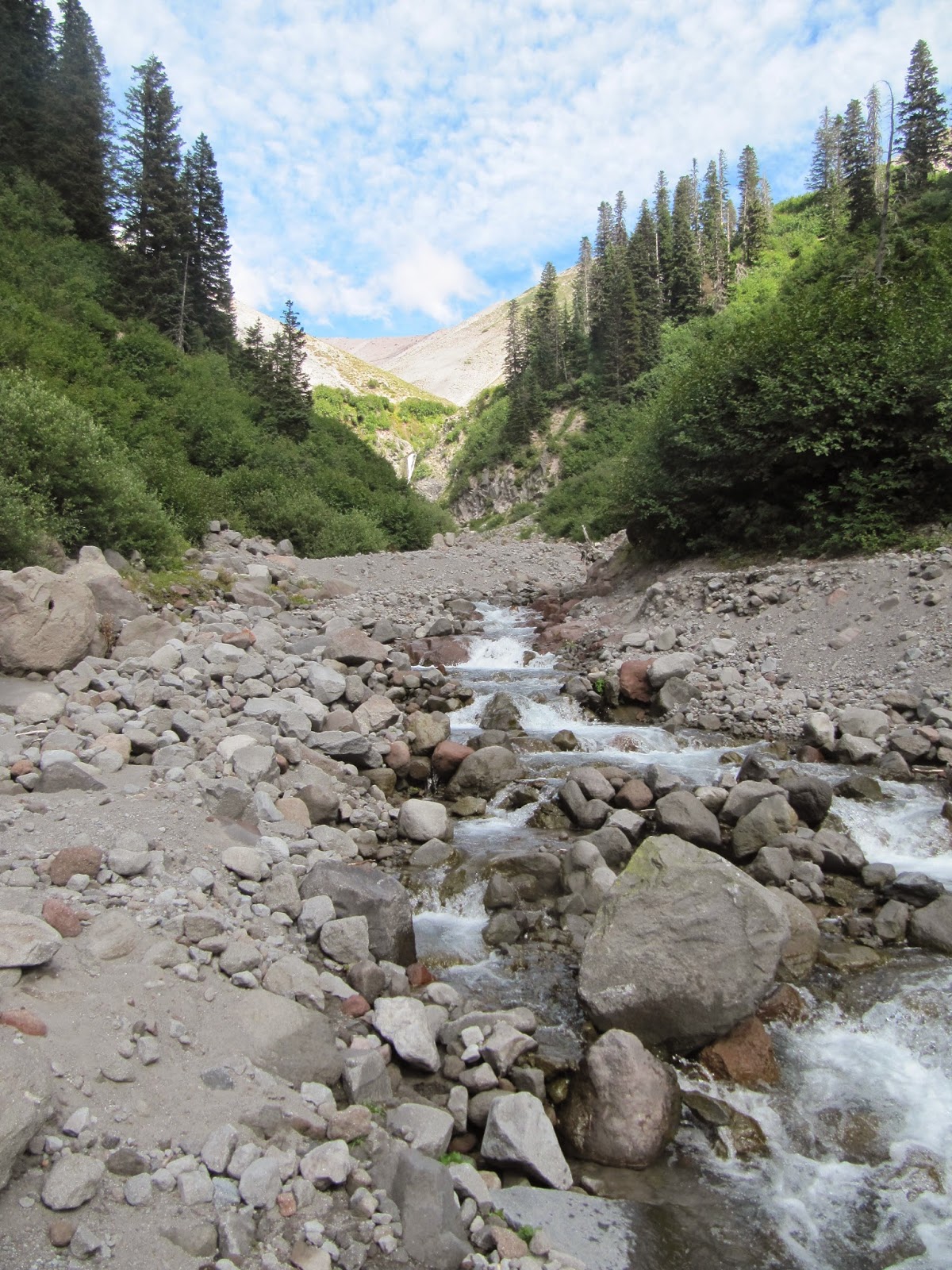 One of  many streams cascading off of Mount Hood. 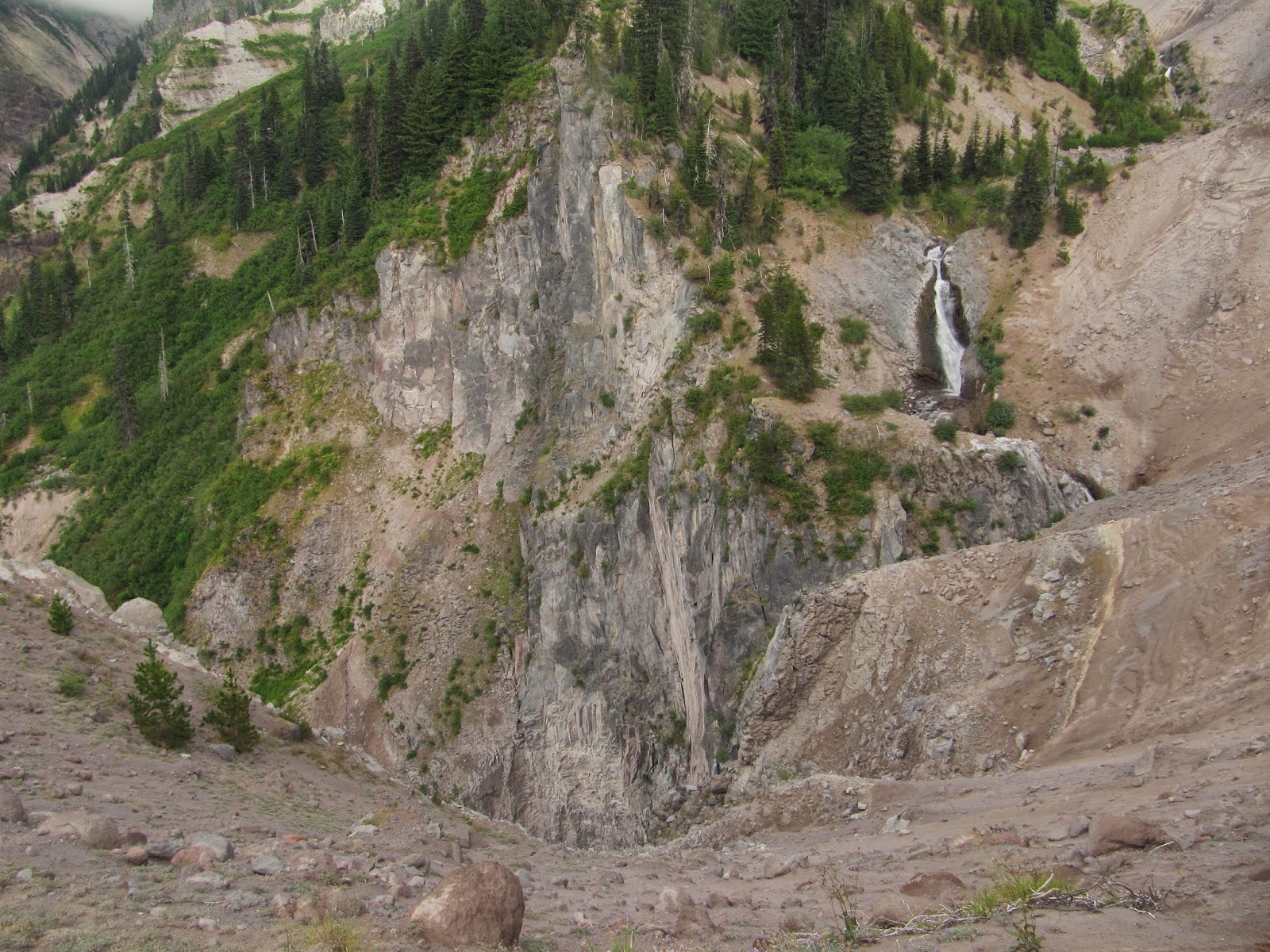 The sides of Mount Hood are heavily eroded. In the distance is a waterfall. 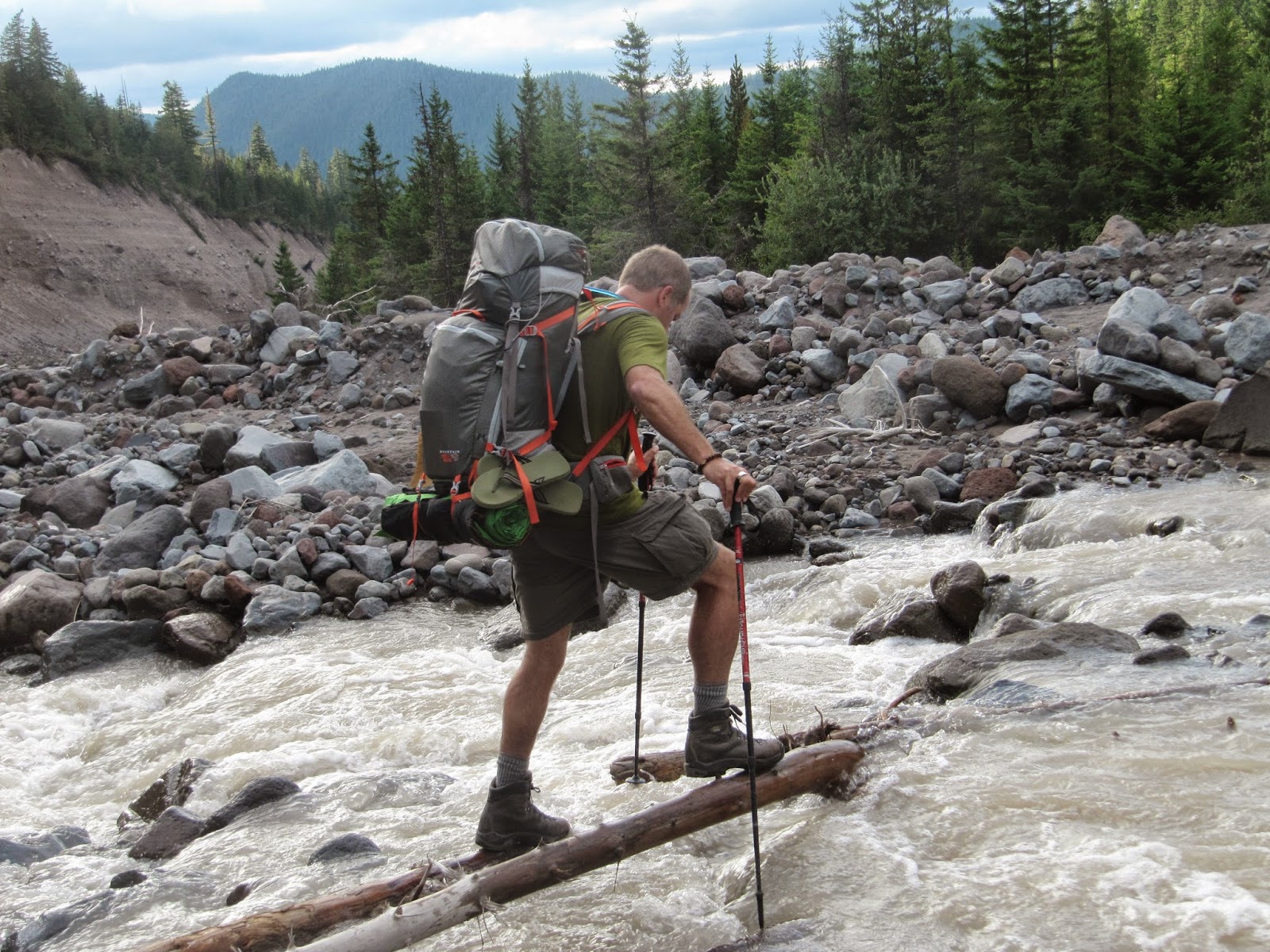 This wasn't much of a log crossing, but it's all there was. A slip, a fall here would have been disastrous. 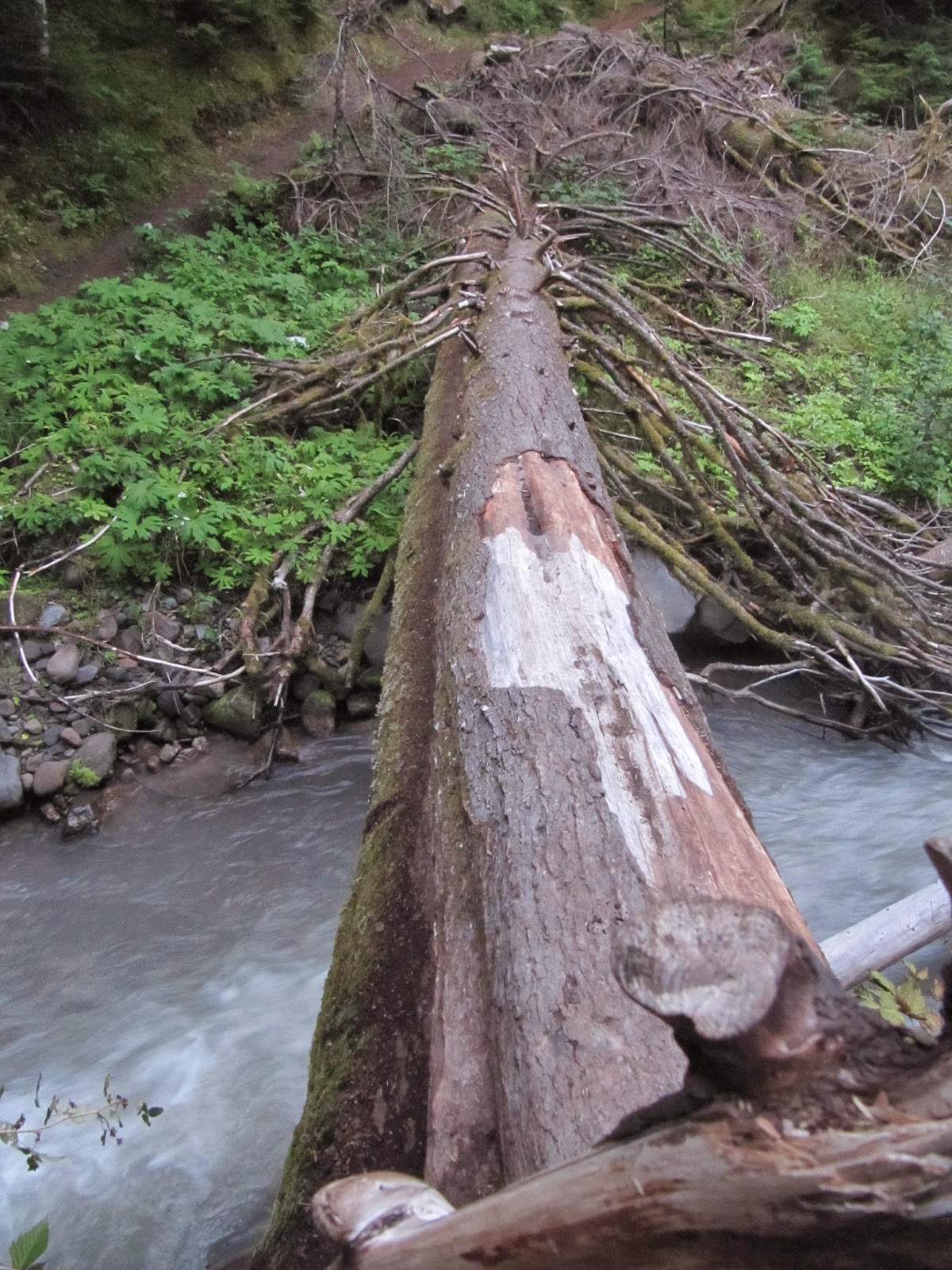 The was the second stream crossing on Mount Hood. There are actually two logs here, one lying on top of the other. To cross, a hiker has to stand on the lower log and hold on tight to the upper log and then shuffle across. Definitely not for the feint of heart.