After twenty-two miles of hiking, and being late in the evening, I took the first flat spot I could find beside the trail, set my tent up, and call it a day.  One thing I’ve noticed about the trail in Washington, there are no ants; at least I’m not noticing them.  It rained again last night, and I’m suffering from the cold.  In addition to wearing my rain pants to bed, I also wear my rain jacket in an effort to retain body heat.

The rain let up this morning, long enough for me to pack up my gear and get on the trail again.  It was early, and the light in the forest was faint when I passed a trail junction leading to Steamboat Lake, and in the dim light of the dark forest, I misread the wooden trail signs which were weathered and covered with moss and headed off towards Steamboat Lake.  I had only walked a few hundred yards up the trail, when the nagging feeling that I might be on the wrong trail became powerful enough to make me turn around and go back and reread the trail signs.  The signs were nailed to a tree, with a steep embankment just below the tree.  I had to put my glasses on, wrap myself around the tree for support, and then stick my nose on the moss of the sign to read the faint inscription
.
I could just barely make out the letters PCT and an arrow pointing in the opposite direction from the trail leading to Steamboat Lake.  I was grateful for the strong impression that had come over me to stop and turn around and go back to reread the sign; as I walked the correct trail, I was reminded of the same strong feeling and impressions I had on my first attempt to cross the Atlantic Ocean to abort the journey and try again another time.

Yesterday, Brownie and Cookie passed me, and I mentioned to them what Puddle Jumper had told me about the delicious huckleberry pancakes, malts, and muffins available in Trout Lake.  I told them I was going to take a couple of hours off the trail and hitch into Trout Lake and indulge myself and invited them to join with me.  Brownie said he’d think about it, but Cookie said probably not as she had friends she wanted to meet up with.  I passed their tents this morning as I continued walking the five miles to Highway 23.

I reached the road crossing at 9:00 a.m. and was just setting my pack on the ground when Brownie showed up.  We both knew there wouldn’t be a lot of traffic on the road, but Brownie said he’d give it fifteen or twenty minutes to see if we could get a ride into town, and if not, he was going to move on.  Cookie never showed up, and after today, I would never see her again, as she would always be one or two days ahead of me.  I enjoyed the couple of thousand miles of trail we shared together; she’s an extraordinary young lady who has a lot going for her.

Just prior to exiting the forest at the point where the trail crossed Highway 23, I encountered trail magic that had been left by the White Mountain Druid Sanctuary, Trout Lake Abbey, and Mount Adams Zen Buddhist Temple.  The trail magic was contained in two tamper-proof bear canisters that were so effective that neither Brownie nor I could figure out how to get the lids off.  Well, eventually we did, but only after much trial and error.  Inside the barrels were carrots from the sanctuary’s garden and fruit drinks.  Attached to a tree above the barrels was a little wooden stand with a Buddhist shrine affixed to it and a message that read,

“May you be well; may you be happy; may you know love; and may you have peace.”

As I reflected on this message, I concluded it would be ideal if individuals could always enjoy these four qualities of life, but to do so would require making correct choices, as all choices have consequences.  For example, the laws of nature – think gravity; the laws of God, i.e., Thou shalt not steal, lie, kill, commit adultery; the laws of man, i.e., federal income taxes are due by April 15.  All have dire consequences if ignored, and can severely affect one’s ability to enjoy life, liberty, and happiness.

In one of the barrels was a trail register, and as I glanced through it, I noticed this message written by trail hiker Blast, who wrote:

Within ten minutes, Brownie and I snagged a ride for the thirteen-mile drive into Trout Lake.  Our driver let us out at the combination gas station/café/espresso shop.  We asked him if this was the only café in town, and he assured us it was.  We sat our packs against the gas station wall out of the way of customers buying gas and went to explore the rest of the town; actually, we were both looking for the grocery store.

Today just happened to be the Labor Day weekend, and apparently this was the weekend for a giant rummage sale in town.  There were several booths and stands set up along the street, as well as in vacant lots adjacent to homes.  I wandered among the stands set up on the street to see what kind of items were for sale.  Several fellows were selling an odd assortment of war surplus items – canteens, metal trays for chow lines, web belts, a few overcoats and khaki shirts and pants.

I moved on to the next table to a big man who had an assortment of rifles and pistols. I stepped back from the crowd a few paces to take a picture of the items on the table.  That was a big mistake.  The seller, when he saw that I had taken his picture with the weapons on the table, totally came unglued.

He immediately wanted to know why I had taken his picture; I didn’t really have a good answer other than I was taking pictures of a Labor Day event in a small rural Washington town. He demanded that I give him the film from my camera.

His concern was that there were anti-gun activists in the county and a picture of him with these weapons left him open to identification should someone at the federal level of government decide to confiscate his guns.  I could understand his concern and offered my apology for my thoughtlessness in taking the picture.  When I told him that the camera was digital, he demanded that I erase the photo from the camera.  I did as he asked, and then he settled down a bit, but I was astounded at the level of his paranoia.  I really expected him to leap across the table and wrench the camera from my hands.  We exchanged a few pleasantries and I moved on to view the contents of other vendor tables, eventually ending up at the grocery store where I hooked up with Brownie.

After purchasing bread, bagels, peanut butter, and four Hershey chocolate bars, Brownie and I walked over to the café and sat down at an outdoor table under a large shade tree and placed our orders for huckleberry pancakes and a drink.

Sundog and his wife, Giggles, were also in town and they joined us at our table.  It was pleasant to visit with them; they had hiked the trail in 2007, and wanted to do it again this year, six years later. 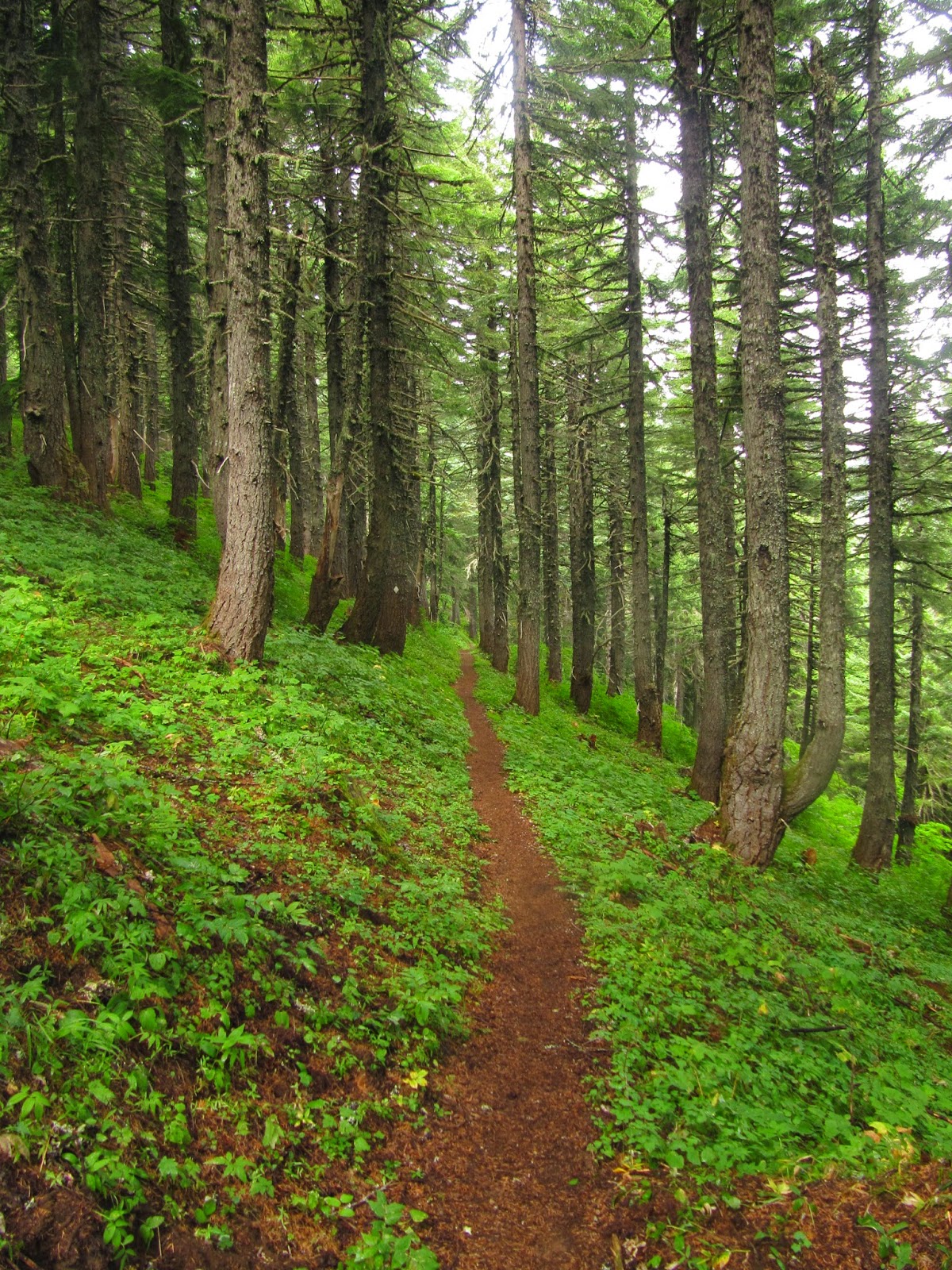 A pleasant section of the trail leading to Hwy 23, from where I can hitch a ride into Trout Lake. 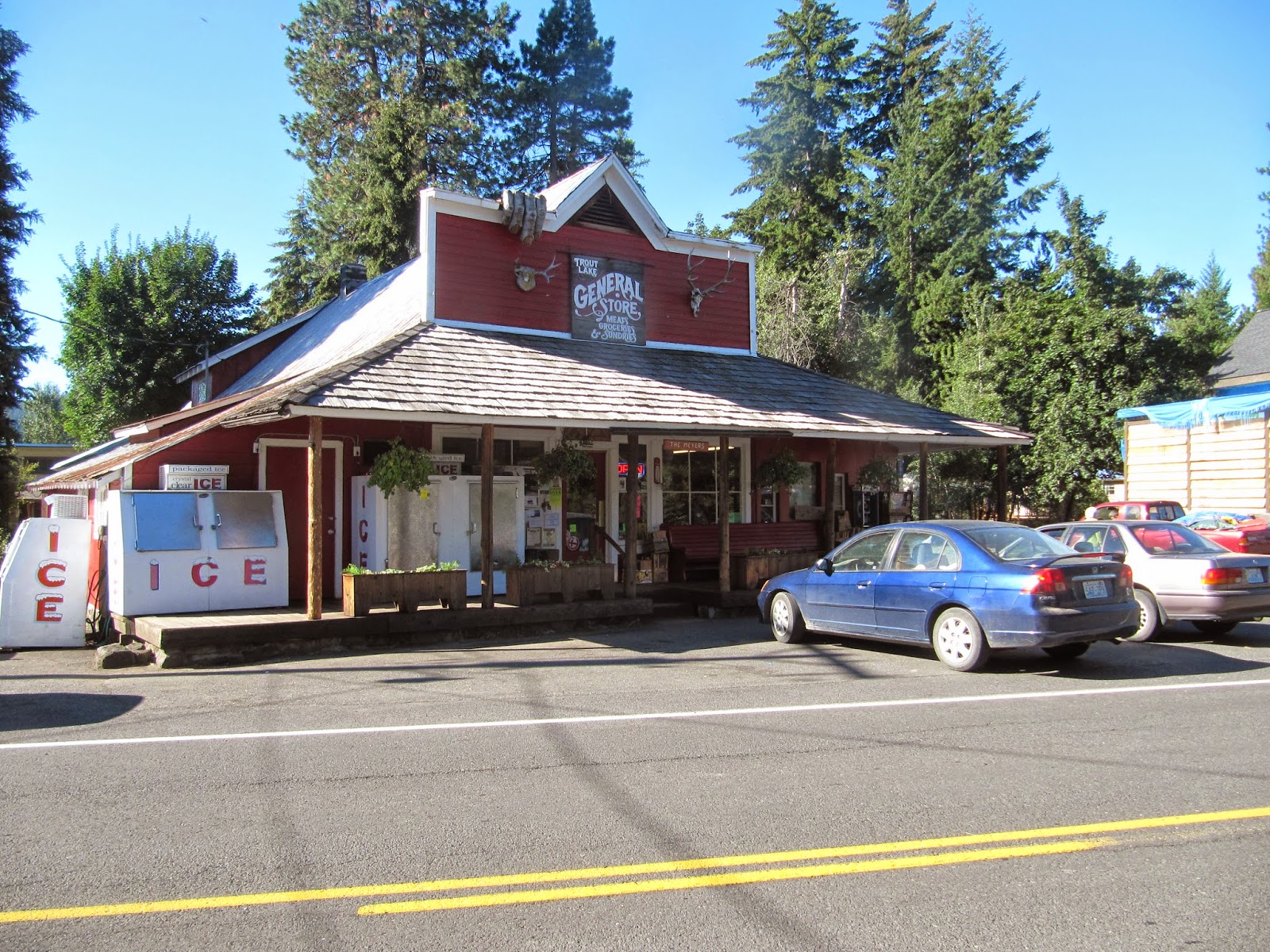 Trout Lake is not very big. This is the grocery store where Brownie and I purchased additional food items. There is a post office in town and some hikers opt to retrieve their resupply boxes here. 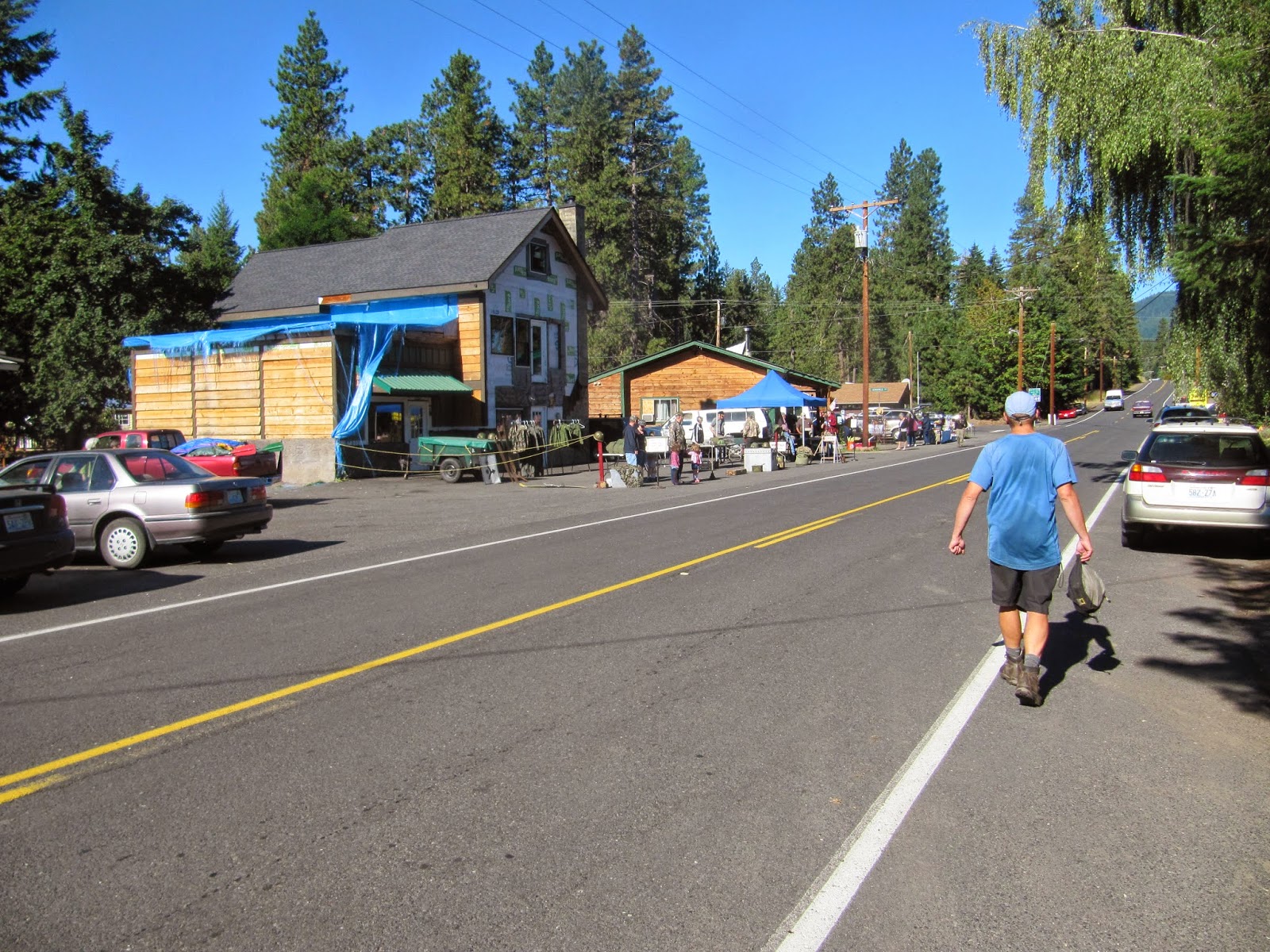 The main street of Trout Lake. It was Labor Day weekend and Brownie is headed down the street to take in the sights and displays of the street vendors. I'm following right behind him.