Our breakfast of pancakes came and were quickly devoured; afterwards, I ordered a huckleberry cinnamon roll.  The price for two huckleberry pancakes was ten dollars, with huckleberries being two dollars extra.  The cinnamon roll was five dollars, and in all honesty, they weren’t that good, but the anticipation of leaving the trail and coming into a small town for pancakes and a milk shake easily made up for the lack of food quality.

I retrieved my backpack from the front of the gas station and returned to the lawn at the back of the café that served as a small park for customers.  I emptied the contents of the pack onto the grass and spread all my wet clothes, tent, sleeping bag, and ground cloth on the lawn and fence to dry in the noonday sun.  Within an hour, I was ready to leave, but Brownie said he wanted to stay a little longer and have a huckleberry milk shake.

Standing at the edge of the pavement on the road leading back to the PCT road crossing, I quickly snagged a ride with a local who was driving another hiker back to the trailhead.  The hiker said his name was Seminole, as in Seminole Indians.  The driver was a middle-aged man with snow-white hair, who introduced himself as Kirk.

After Kirk dropped us off at the trailhead, Seminole engaged me in a short conversation. He said he had come into Trout Lake several days ago and stayed at the Trout Lake Abbey on the outskirts of town, of which Kirk was the proprietor.  He said that for twenty-five dollars he had been given a clean room, complete with toilet and shower facilities, dinner that evening, and breakfast the next morning.  The next day, Seminole said he hiked to the top of Mount Adams and returned to the Abbey the same day
.
He said that Kirk was a practicing Druid, or one devoted to Paganism – earth religion; in fact, he said that Kirk was the highest-ranking priest of druidry in the United States, if not the entire world.  When I returned home, I did a Google search for Kirk and the White Mountain Druid Sanctuary he operates, and on his web page there was a great picture of Kirk with his long flowing white hair dressed in magnificent white robes and holding a large wooden staff.  I must say, he looks very regal in his ceremonial dress. From his web page, he said this about himself:

“So, I practice druidry within my commitment to ADF (Ár nDríaocht Féin) Druidism. These pages will explore both sides of this coin in my spiritual practice:  that of my personal practice of ritual, trance, meditation and ecstasy, and my more public face as priest of an ADF Sanctuary, ADF Archdruid, Chief of the Clergy Council, former Chief of the Liturgists Guild, behind-the-scenes cheerleader and, occasionally, scourge.” (Kirk)

Kirk lives on a farm outside of town and shares the property and buildings with a Buddhist monk named Kozen, who runs his own show called the Mount Adams Zen Buddhist Temple.  From a religious standpoint, apparently Paganism and Buddhism don’t overlap, so each – Kozen and Kirk, can do their own thing, instruct their own students, teach their own classes, and provide their own ceremonies and rituals in the way they see fit.  The two share the labors on the farm that has been certified by the state as an organic farm producing eggs, fruits, and vegetables that they sell at local farmers market.  I’m glad I got to meet Kirk; he was an out of the ordinary character, and like all hikers on the trail, he had an interesting story to tell.

Seminole and I walked across the road together; as we walked, he talked.  He said he needed to be in Packwood by Monday evening (today is Saturday afternoon) as the Florida State Seminole football team was playing a big-time rival, and as a die-hard Seminole fan, he wanted to be sure and watch the game.  Packwood was over eighty miles from the road we were standing on, which meant a minimum of forty miles per day to reach Packwood by Monday evening.  I shook my head in disbelief as I contemplated the distance he would have to travel each day, besides the fact that he smoked.  But Seminole was young and an exceptionally fast hiker, so I had no doubts that he would be present for game day.  Once we separated from one another, I never saw him again.

From Highway 23, where Seminole and I separated, it was a two-thousand-foot climb to the base of Mount Adams.  It was a struggle for me, and I’m secretly wishing the trip to be over with.  Mount Adams still had an abundance of snow on its flanks, and the first glacier I could see was White Salmon Glacier.

Just past the Stagman Ridge Trail was a spur trail that led to the summit of Mount Adams.  The PCT Oregon/Washington guidebook said that this was a popular trail to the summit, and that in times past it was a route used by mule trains in the 1930s to bring supplies to a sulfur claim that had been staked out at the summit, but didn’t pay off.

As I hiked the last few miles to my camp at Sheep Lake, I could see, far in the distance, the peaks of the Goat Rocks Wilderness area and the faint outline of Mount Rainer, the largest volcanic peak in the Cascade Mountain Range.

It was a pleasant walk this morning around the base of Mount Adams; there were open meadows and lava beds to traverse and I met a number of day hikers on the trail.  There were several Forest Service roads that cut through this wilderness area, giving hikers access to the numerous trails that crisscrossed the landscape.

The glaciers, high up on the slopes of Mount Adams, are the source for many streams and waterfalls that flowed down from the mountain.  One small waterfall that emptied into a meadow is a favorite camping spot for groups, and on this day, a group campsite is occupied by a noisy group of boy scouts.  I waved to them as I passed by. 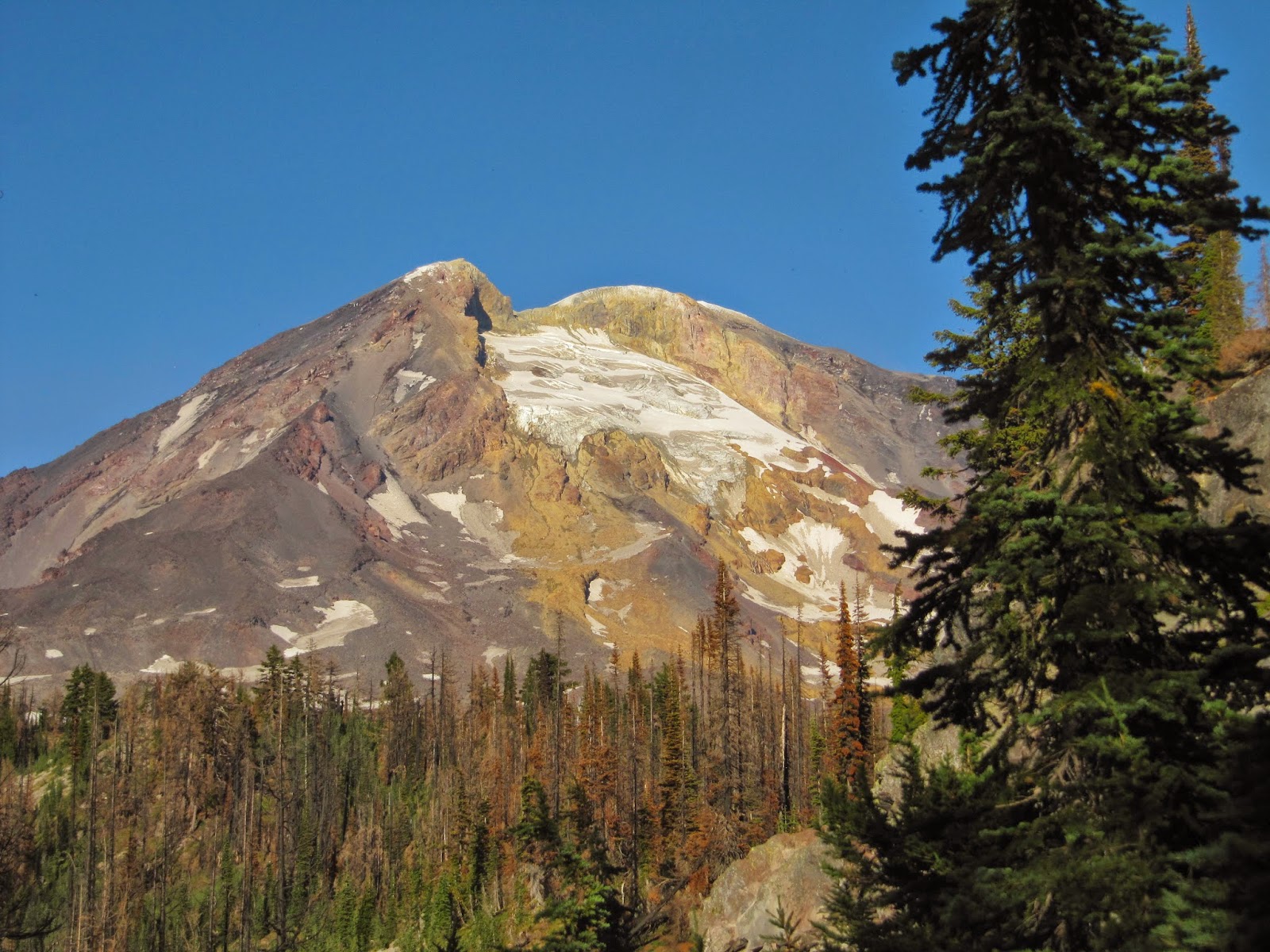 I believe this is a photo of Mt. Adams. Trout Lake is just a few miles from this mountain and ambitious hikers will often hike to the summit and return to Trout Lake in the same day.

This is a photo of Kirk in his ceremonial robes. He does look quite regel. 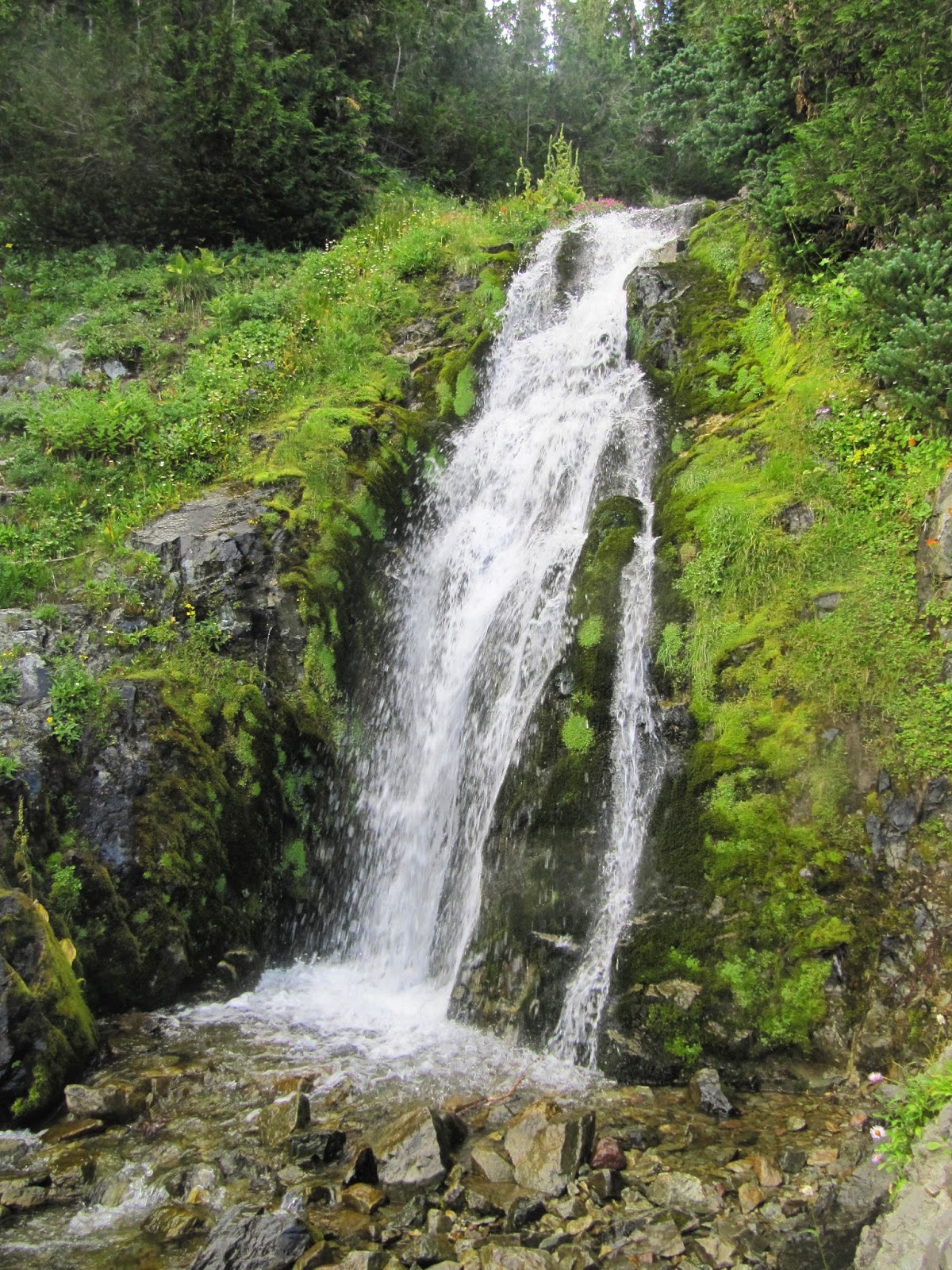 Snow melt coming from Mount Adam flowing into a meadow with a number of camping sites.