While studying my maps, I found the name Stampede Pass, which showed the three power lines running through the woods, and then in really tiny letters beside two parallel lines shown as dashes were the words Stampede Tunnel.  At the moment, they didn’t have any meaning for me, and it wouldn’t be until I got home and had a chance to do a Google search, that I found meaning for the words.

What I found was that there was actually a railroad tunnel under Stampede Pass.  It’s 1.86 miles in length and was completed by the Northern Pacific Railroad in 1888.  At the time, the owners of the company didn’t want to wait for the tunnel to be completed, so they authorized an overland route across Stampede Pass which was completed in 1887.  The overland route had a number of switchbacks on each side of the Pass, including two enormous S curves.  With the completion of the tunnel, the overland route fell into disuse; the tracks were removed and much of the rail bed is now hidden from view by forest growth and the clear-cuts made for the construction of the three high-tension power lines. (Macintosh)

Originally, Stampede Pass was named Garfield Pass after the recently inaugurated President Garfield.  The name Stampede Pass came about after an incident that happened in 1882:

Virgil Bogue, a civil engineer working for the Northern Pacific Railway, wrote the Washington State Historical Society's William Pierce Bonney about the naming of the pass in 1916.

"I had a trail cutting party camped near Stampede Lake; this party was controlled by a foreman who I thought did not accomplish much work.  When the other party which had been cutting the trail from Canoe Creek up Green River to my camp near the mouth of Sunday Creek finished its work, I sent its foreman to the camp occupied by the former mentioned party then at Stampede Lake, with a letter authorizing him to take charge.  A large number of the former mentioned party then stampeded.  There was quite a large fir tree at this Stampede Lake camp, which had a large blaze out on it by the men remaining and with little piece of charcoal from the campfire they printed on the blaze the words Stampede Camp.” (Bogue)

Bonney, who worked for the Northern Pacific on Stampede Pass, added,
"When the men quit work about the middle of the afternoon, the day of the stampede, they repaired to camp where they were busy waiting for supper; when the foreman came and announced to the cook that the food in his charge belonged to the railroad company and was furnished to feed men that were working for the company, these men had severed their connection with the company, hence were not entitled to be fed; then was when the real stampede began." (Bonney)

Within a half mile, I was at the Stampede Pass road crossing and encountered trail magic being offered by two former PCT hikers, Bumble Bee and Stumbling Norwegian.  They had been at this location for several days and were in the process of packing up; however, food was still available and I opted for two hot dogs, even though I had just eaten my biggest meal ever.

Brownie and Left Overs were also at the lunch spot, both having come in the night before, but were still hanging out when I arrived, each having imbibed a little too much the prior evening.
Where the trail crossed over the road, there was a small, trailhead parking lot, and as I came out of the woods, I saw four men and three dogs just leaving the parking lot and heading up the trail.  When I asked Brownie if he knew anything about them, he said,

“No,” but then added that they were taking a full week to walk eighteen miles to Snoqualmie Pass, and they had already started drinking.

After finishing my second lunch for the day, and thanking the hosts for their generosity, I left the lunch spot before Brownie and Left Overs.  Within a mile, I found the four men sitting on the trail, taking a rest.  One was carrying a guitar, and another was swigging from a gallon-size jug of vodka, and all were carrying oversized packs that reflected their knowledge, or lack thereof, of camping skills.  The dogs were two German shepherds and a golden retriever.  The retriever was tuckered out and was lying in the middle of the trail, while the German shepherds were eyeing me suspiciously; fortunately, the dogs were being restrained by their owners, for the younger dog was aggressive and ready to pounce.  I slipped by without incident.

Brownie wasn’t so fortunate when he passed by a short time later.  By then, the younger, more aggressive dog was not on leash and attacked Brownie as he passed by.  He sustained a nasty bite on his hand which really aggravated him; he said he wanted to kick at the dog, and/or hit it with his trekking pole, but then thought twice about doing either, in view of the fact that there were four somewhat less than sober dog owners who might not take kindly to his actions. He walked on, feeling somewhat grateful at not sustaining more serious injury.

Today was Monday, September 9; I camped last night at mile 2,401, leaving me 264 miles to the Canadian border.  It was so close, yet still so far away.  I really was exhausted and was slowing down; I found myself stumbling more and more over rocks and tree roots; I rested often.  It was only ten miles to the ski resort of Snoqualmie on Interstate 90, and long before I arrived there, I could hear the traffic on the Interstate, for the highway curved around the resort as it traversed through Snoqualmie Canyon.

Around noon, I began the descent down the ski slopes of Snoqualmie.  Hillsides that were once vibrant with wildflowers stretched before me, and the fragrance of damp earth and dry grass was a subtle reminder that summer was fading fast and would soon be followed by winter.

I walked under several chairlifts and found a dirt road traveled by four-wheelers and ATVs that led down to the parking lot at the bottom of the ski slope.  The motel and the Chevron gas station where I would pick up my resupply package were on the north side of busy Interstate 90.  I waited for a break in traffic and then quickly hustled across.

My original plan was to pick up my resupply box, upload the contents to my backpack, and continue on up the trail, as I felt I needed to make another seven or eight miles for the day; however, I arrived at Snoqualmie later in the day than anticipated, and decided that I deserved some pampering, as opposed to punishing myself by continuing on the trail.  The trail would still be there tomorrow, and taking a few hours off to rest and clean up wouldn’t noticeably slow me down.

The Summit Inn was the only real motel in town, and it was a very nice one.  As I crossed the parking lot in front of the motel and put my hand out to open the front door, my gaze was directed to a notice taped to the inside of the glass door.  It was a missing person’s notice, and I took a moment to read it.  It described a woman from the community, in her eighties, who had been missing for several weeks while in the mountains picking huckleberries.

Her car was found at the trailhead parking lot, but she had gone missing; As I contemplated her dilemma, I doubted that after two weeks, she was still alive, and I could sense her feeling of terror at realizing she was lost in the woods, and had not the foggiest idea where the trail was or how to get back to her car.  She wandered, and invariably moved deeper into the woods, until she was totally disoriented, completely lost and far from the trail. 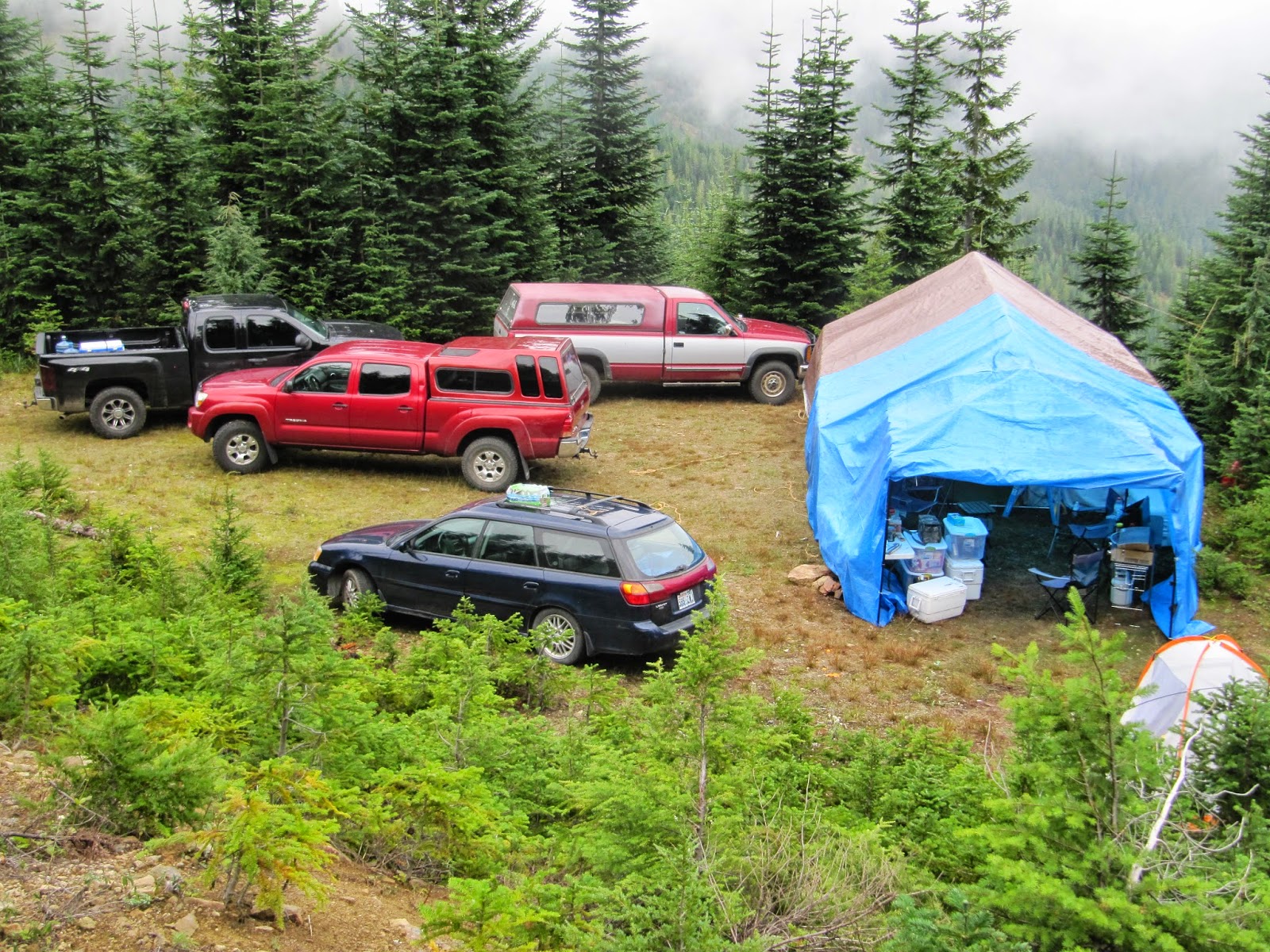 Trail angel camp at Stampede Pass hosted by Bumble Bee and Stumbling Norwegian. In the tent were Brownie and Left Overs. The vehicles belonged to the yahoos who had the dogs. 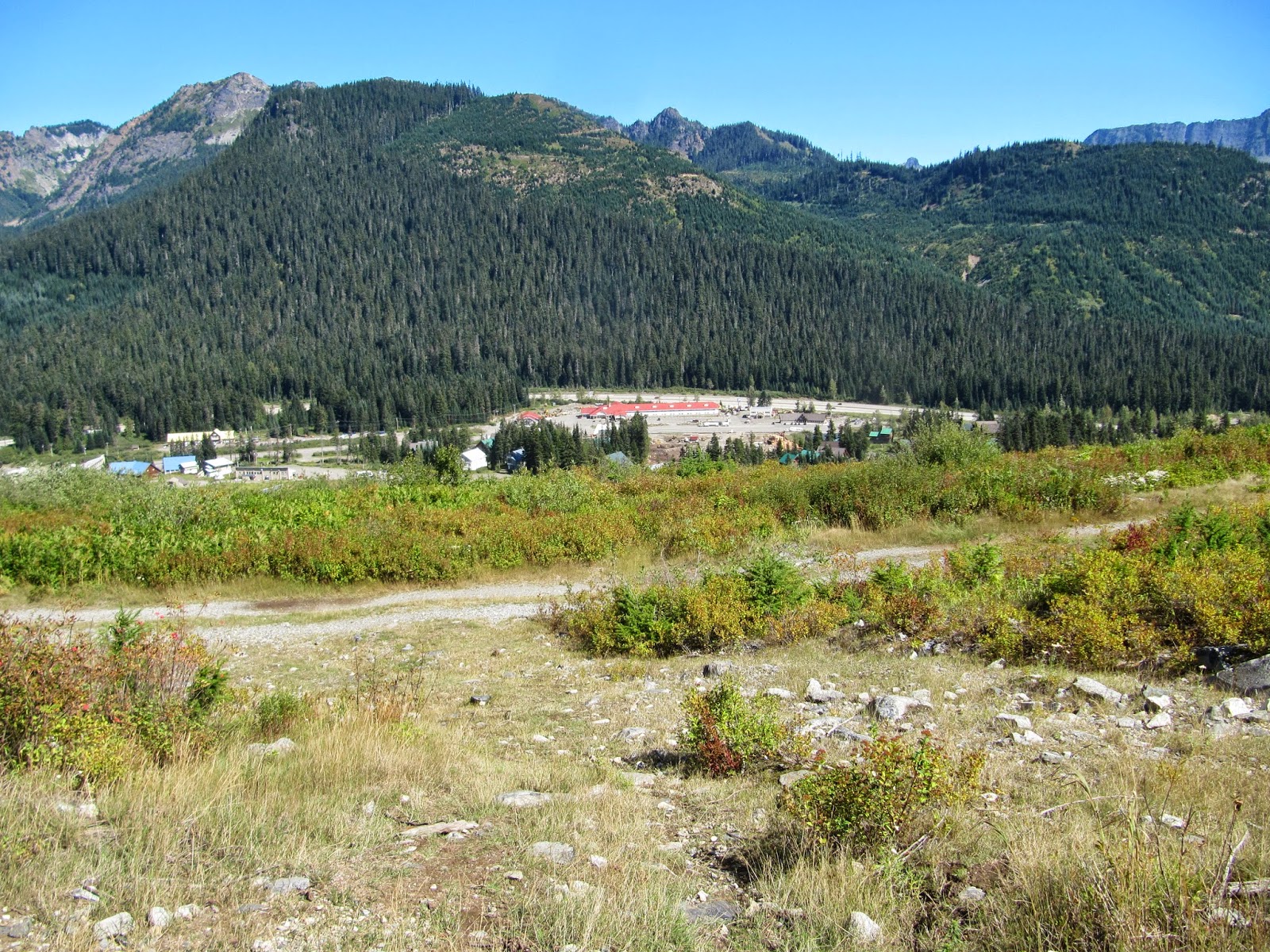 Coming down the mountain into Snoqualmie. In the distance is the Summit Inn. I had planned on just retrieving my resupply package and moving on, but I got sucked into the vortex of a hot meal, shower and clean bed. Tomorrow, the trail will wind its way to the tops of the crags across the valley.