It rained all night and I was very grateful to be in my tent, but as long as I was awake, I could hear the humming of the high-tension electrical wires above me.

It was almost light when I exited my tent and begin preparations for the day.  It had stopped raining, but the sky was still overcast; my tent was wet and the ground muddy, which made rolling and packing the tent into its stuff sack a real pain.  I put my rain pants on to keep my pants dry while walking through the brush alongside of the trail, and I ate a snack to get a flow of energy coursing through my body, then plunged back into the green canopy
.
The forest is beautiful when it's wet; the colors are more vibrant, especially the color green, of which there was an endless variety of shades.  Green moss tended to cover everything that didn’t move, and virtually obliterated any other color in the forest except the brown color of the trail.

As I walked, I keep looking for signs of Hooligan’s camp, as it was starting to rain when he passed me last evening.  I was curious as to where he ended up.  I was not sure he even has a tent with him; I think most often, he just curls up in his sleeping bag and pulls a tarp over his bag in the event of rain.

Each day brought new scenic wonders, and today I would be treated to two of Oregon’s spectacular natural wonders – Timothy Lake and Mount Hood.

Timothy Lake was just beyond where I camped last night and the trail builders routed the PCT to traverse its four-mile shoreline.  The south end of the lake was encompassed by a Forest Service backcountry road that gave visitors to the region access to the lake.  Breaking out of the forest to cross this dirt road, I found three section hikers sprawled out on the ground, drying their tents and sleeping bags.  The sun has come out, so I followed their example and pulled my wet gear out of my backpack and spread it on the ground also.  While I waited for it to dry, I ate my breakfast of hydrated oatmeal and crushed nuts.

Back on the trail, I passed a number of campsites along the lake that were accessible by both boat and the Forest Service road, which was just out of sight off to my right up in the trees. At one of these camps, I saw several men standing around a roaring log fire and in the midst of them was Hooligan.  He was holding a cup over the fire, as though he was trying to warm up its contents.

I didn’t think he made it this far in the rain and dark last night, but it was possible that he approached the group of men this morning, for whatever purpose, and they, having pity on him, invited him to stay for breakfast.  Whatever his reasons for being there, it looked like he scored a meal.

Just beyond the north end of Timothy Lake was an ice-cold, spring-fed lake named Little Crater Lake.  It had a depth of forty-five feet and was crystal clear, its purity being maintained by a fence that encircled it to keep cattle from polluting the waters.  There was a small campground two hundred feet east of the lake, and was an excellent place to camp for hikers who found themselves in the vicinity, however, don’t expect to swim in the waters, as the average temperature year-round is forty degrees.

It was a solitary walk this morning under a forest of shady trees.  The variety of conifers was nowhere greater than what I was encountering on this stretch of trail leading towards Mount Hood.  Although I could identify only a couple of species, my PCT Oregon-Washington guidebook pointed out to me that scattered throughout these forests were Douglas-fir, western and mountain hemlock, western red and Alaska cedars, silver, noble, grand, and subalpine firs, and western white and lodge pole pines.

There were numerous springs along the trail, some of which were so voluminous that they formed
small streams where they crossed the trail.  And the most precious aspect of being on this part of the trail was that it was covered with luscious, sweet-tasting blue huckleberries.  I wasted a great deal of time stopping to pick and eat handfuls of these sweet berries that have the appearance of blueberries.

Within a short time after passing the north end of Timothy Lake, the three section hikers I had seen drying their tents beside the Forest Service road caught up to me; the small group consisted of a father and his two teenage sons.  I was not sure where they started, but the Timberline Lodge on Mount Hood was their ending point.  One son, Andy, kept lagging behind as he was picking huckleberries and stashing them in a gallon-size Ziploc bag.

The father had been on this section of the trail before and was introducing his sons to the wonders and beauty of the wilderness he had known and experienced in earlier years.  When we came to an opening in the trees that gave an unobstructed view of Mount Hood, the father stopped and pointed out to all of us the tiny speck that represented the Timberline Lodge that sat halfway up the slopes of the mountain.  Even though I could barely see the outline of the structure, I had no idea that the side of the mountain was the location for this resort.  I knew I would be visiting the lodge to pick up a resupply package, yet from my viewpoint beside Timothy Lake, it appeared to be so far away and the elevation gain so great as to be almost inaccessible.

Just before crossing paved Highway 26 that connects the vicinity of Portland in the north with the vicinity of Bend in the south, the four of us found a handwritten note on a paper plate attached to a road sign that read Trail Magic ahead.  I knew in my heart that I was going to find Kermit and June Bug and their bright green VW bus in the trailhead parking lot providing the trail magic - and so it was.

I was so happy to see them; they’re like old friends, and yet I don’t even know them. Such is the wonderment of trail magic on the trail.  They had camp chairs to sit in, and provided cold, pink lemonade, a few cookies, and pieces of fruit.  It was so nice to just sit and relax for a bit.  I didn’t think the father and his two sons had ever encountered trail magic before, and they seemed a little taken back by the hospitality and generosity extended to them by Kermit and June Bug. 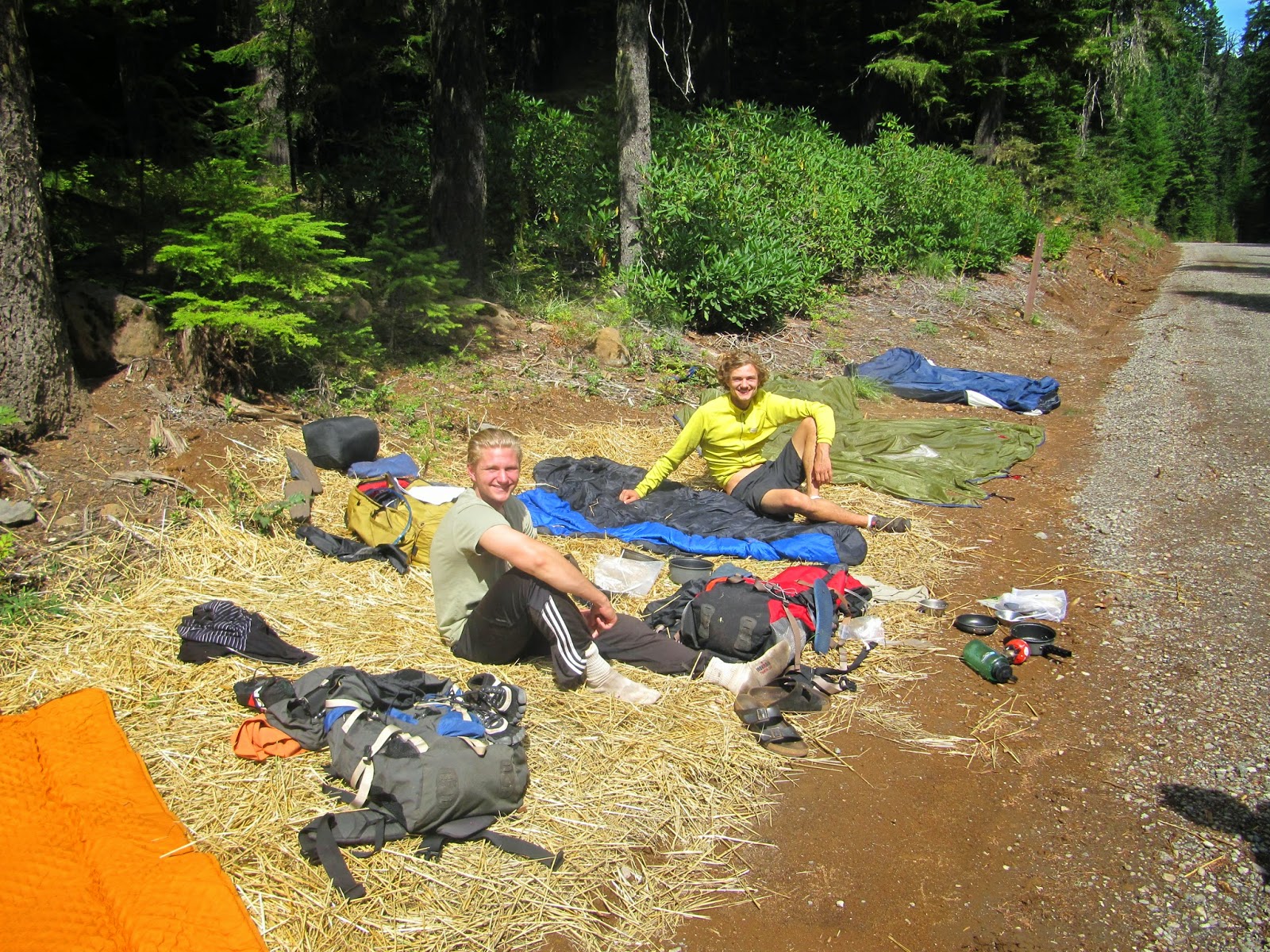 A father and his two sons drying out their equipment from last nights' rain. 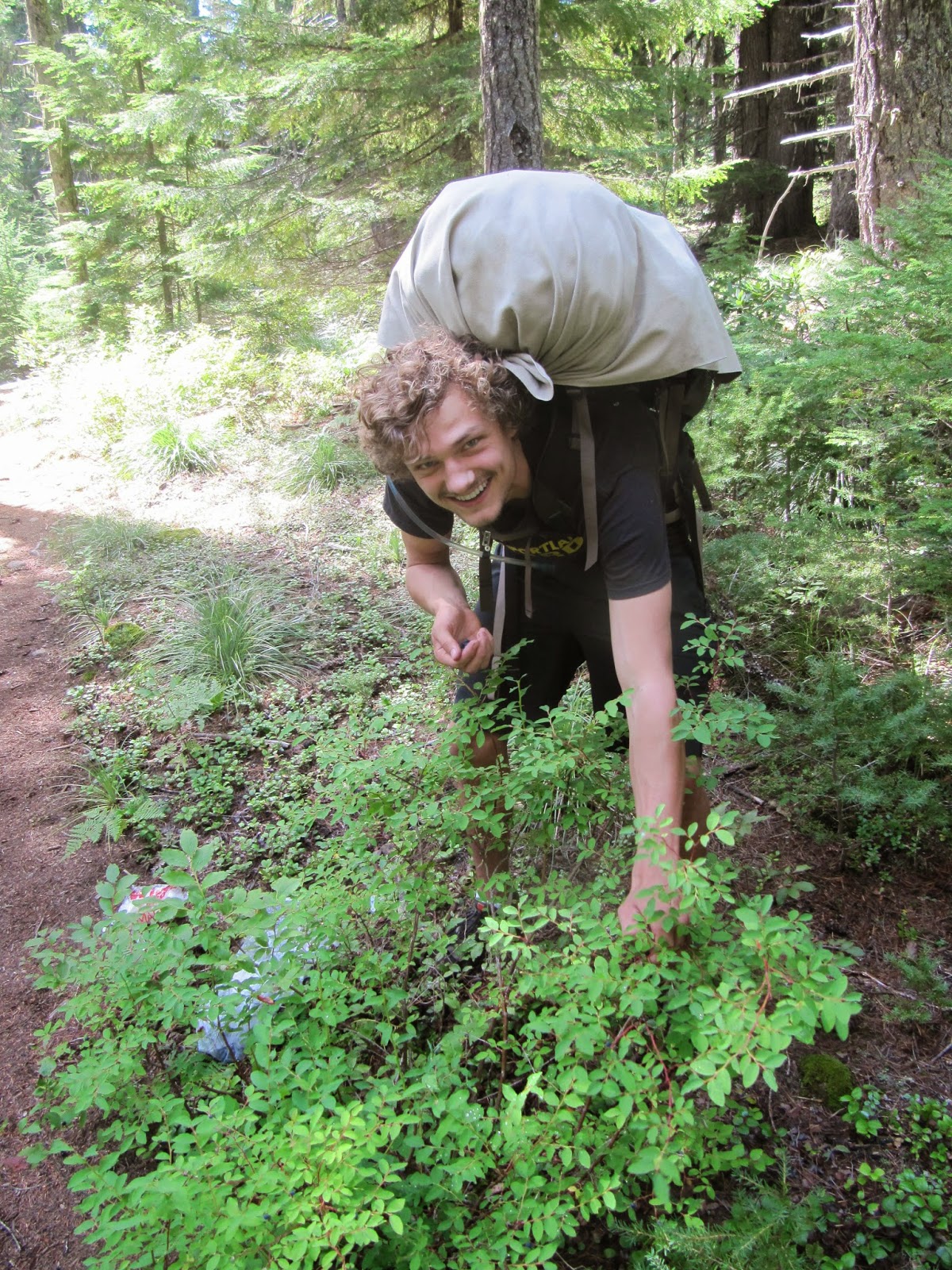 Andy couldn't keep his hands out of the Huckleberry bushes. 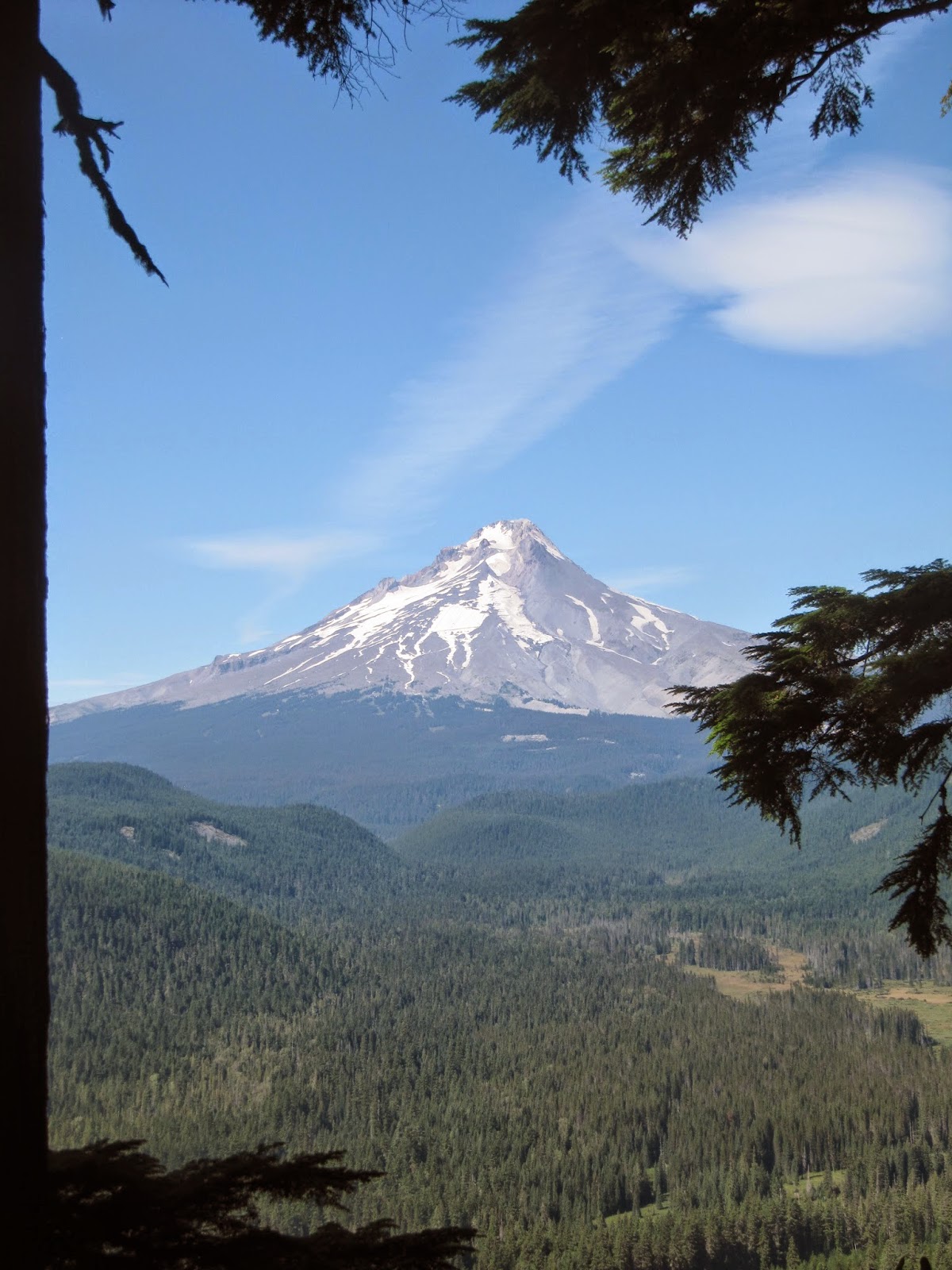 The first clear view of Mount Hood, and just below the white glacier in the middle of the mountain is the Timberline Lodge. From this point, it looks so far away, but in two days, I will be there eating breakfast in the dining hall. 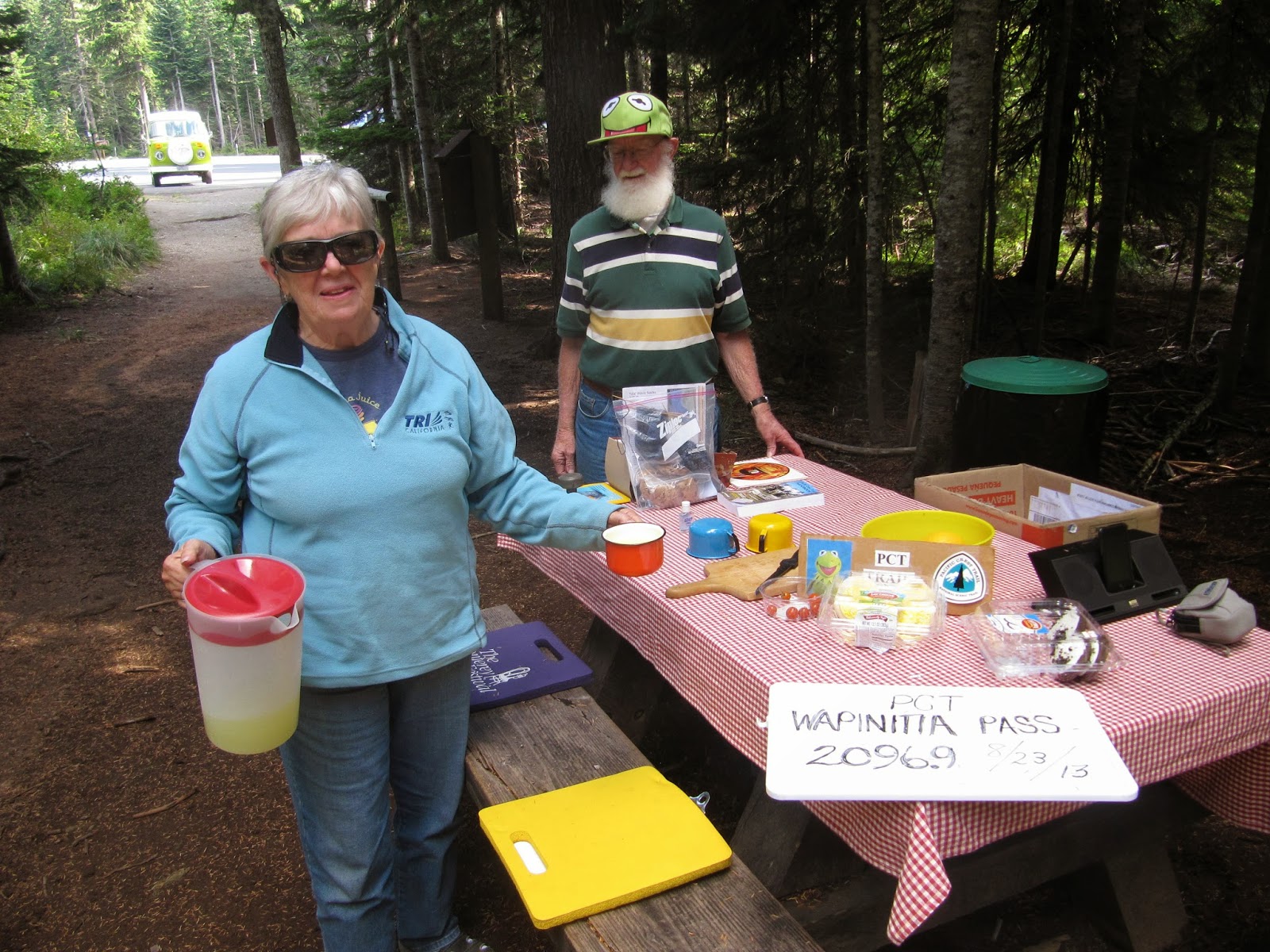 One more time, we enjoy trail magic with Kermit and June Bug.What an absolute delight these two are.