The road across the bridge ended in a T at Highway 14, also known as the Lewis and Clark Highway.  The elevation here was 180 feet, the lowest point on the PCT, but by the end of this section, the trail will have climbed to 7,080 feet.  At the road junction, there was a wonderful sign that read,

“Welcome to Washington, the Evergreen State.”

Then a short way off, there was another sign, even more exhilarating, that read 507 miles to the Canadian border; the countdown has begun.

The climb up out of the Colombia River Gorge was a fearsome one, and the earlier in the day one can start, the less one will be afflicted by the heat and humidity of the lush, wet forest surrounding the trail.  After climbing a few hundred feet in elevation, I had an unobstructed view of the Bonneville Dam, built in the depression years of the 1930s, primarily to generate electricity.  It also had fish ladders to help native salmon and steelhead to migrate farther upriver to spawning grounds and locks to facilitate upriver ship traffic.

The trail guided me around the west side of Table Mountain, the source of rock material for the Bonneville Landslide that blocked the Columbia River, and continued to climb until I passed Three Corner Rock, the major geological feature on this section of the trail.  If I were to hike the one-third mile to the base of the rock, and then scramble up to the summit, I would have had unrestricted views of Mounts Hood, Adams, and Saint Helens, and if weather permitted, Mount Rainier far to the north.

In quick succession I crossed over Rock Creek, Snag Creek, and North Fork of Rock Creek, and camped for the evening at Panther Creek. Along this route, I was passed by a slew of hikers – Brownie, Commando, Cookie, Leftovers, Laptop, Sailor Moon, and Trout.

A few miles before Panther Creek, I found a note on the trail stuffed inside a plastic Ziploc bag.  It had been written by Hermes and Lotus who I had passed earlier in the day as they were hiking southbound.  It read:

“Beware, wasp nest on trail; bushwhack around or risk getting stung!”

Hiking with me at the moment was Sailor Moon.  She was only wearing shorts and a short-sleeve shirt and was very concerned about getting stung; accordingly, she veered left off the trail and bushwhacked through the undergrowth to connect with the trail farther down the mountain.  I was wearing long pants and a long-sleeve shirt and continued down the trail.  I guess I was fortunate, for I neither saw a wasp nor even heard one.

Many others were not so lucky; the young lady, Ranch, from Berlin, Germany, was stung as many as thirteen times, had a severe reaction to the stings, and had to be taken into a nearby town for treatment.

Laptop and Trout have been collecting chanterelle mushrooms; in fact, when Laptop passed me, I saw a gallon-size Ziploc bag filled with mushrooms hanging from his backpack.  He said that he and Trout were going to cook them up this evening and would share them with me if I were around.

Just before entering the Panther Creek Campground, I find another note posted on a trail sign. It was written by the British hiker, Walkie Talkie, and it read,

“When the cougar jumps down, the pants fill up!”

There have been sightings of cougars here in the woods, and it will be interesting to hear Walkie Talkie’s tall tale of what he encountered.

After I arrived home and reconnected with the Facebook page for the PCT Class of 2013, Walkie Talkie posted this message.  He said he had been walking solo in the Panther Creek area and after rounding a bend in the trail, came face-to-face with a large cougar.  He said they both stopped and just stared at one another, not knowing what the other was going to do.

Now the cougar was no dummy and wasn’t really surprised to see Walkie Talkie; after all, this was a hiking trail, and the cat was not surprised to encounter humans walking the trail. The cat had no particular interest in Walkie Talkie, for over the years, he had seen many hikers along the trail, and was familiar with their noxious scent; if the truth be known, he just liked to toy with them.

Like most big cats, this cougar was patient; after a few moments of sizing him up, the cougar left the trail, walked a few feet up the hillside, sat down on its haunches and continued staring at Walkie Talkie, which made him nervous, and was exactly the reaction the cat was hoping to achieve.
Walkie Talkie said the standoff continued for a full fifteen minutes and only concluded when another hiker, Roger Dodger, approached from behind.

So, in the standoff, who won?  I’d say cougar scores again big time.
Walkie Talkie – according to his own account, not so good – “Pants fill up.”
The cat trotted off, smiling and laughing. 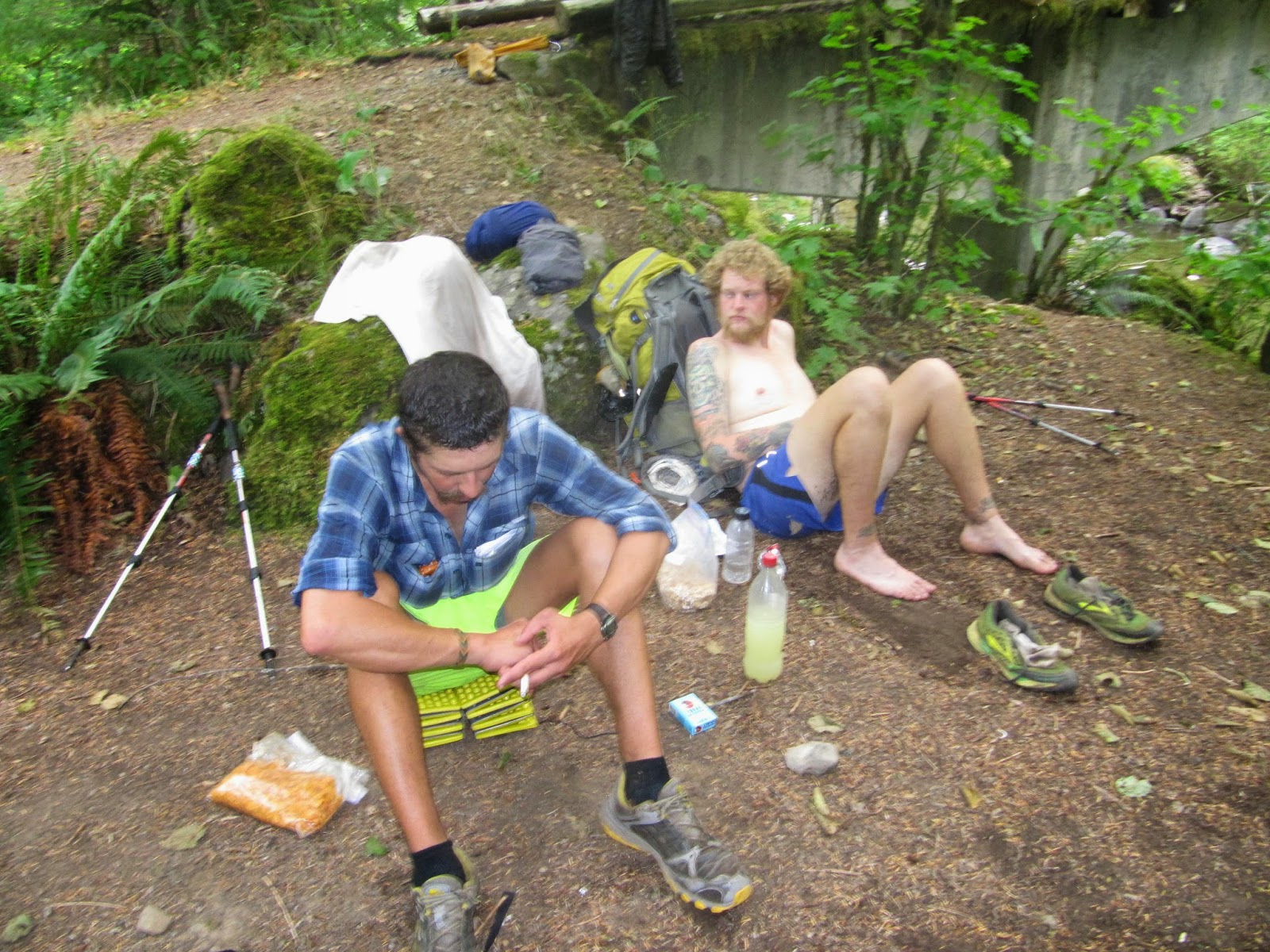 Hikers Trout and Left Overs taking a smoke break along the trail. 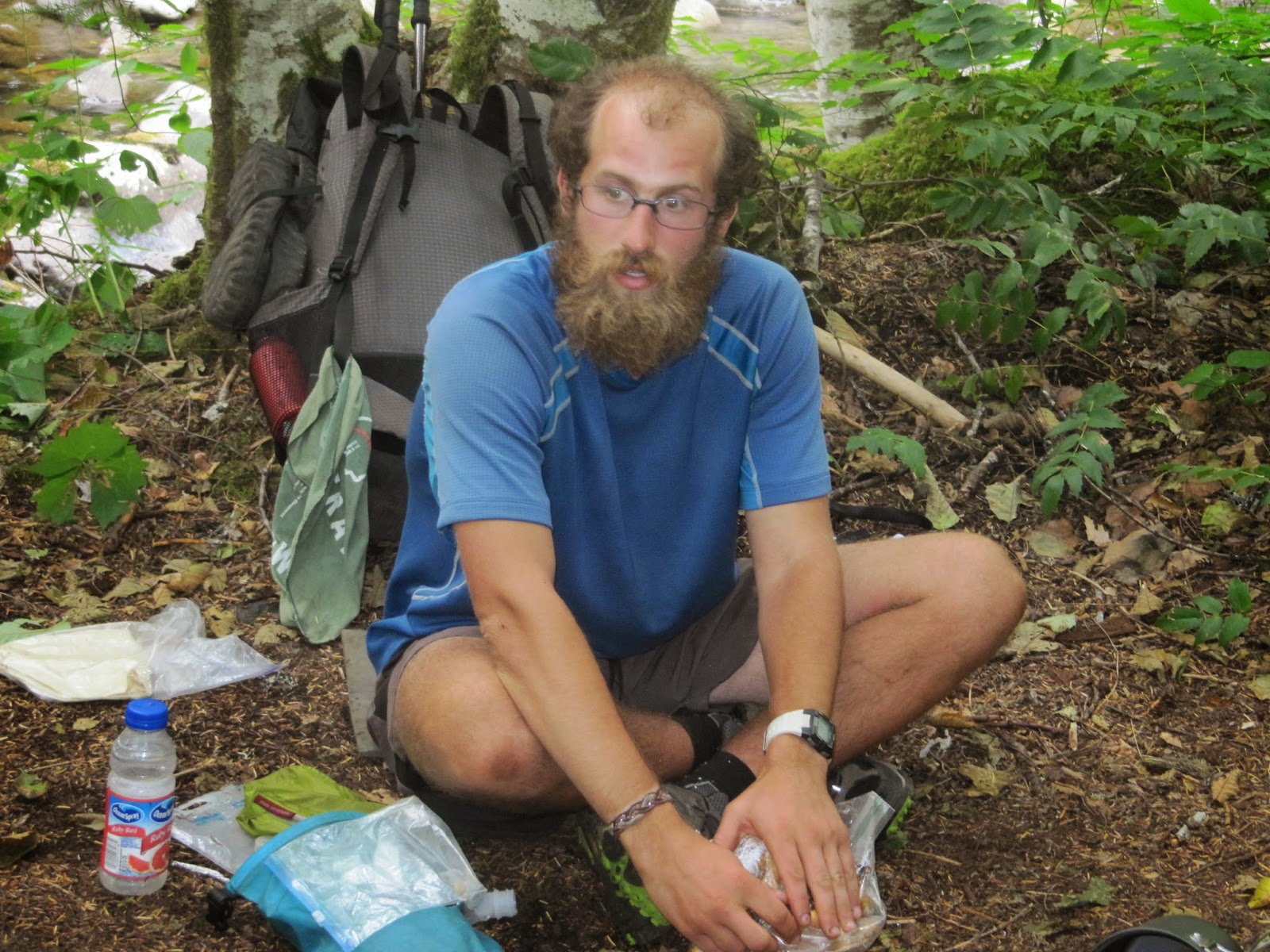 At this particular rest stop, there were a number of hikers gathered. This young man was congenial and friendly; trail name: Dinner Plate. 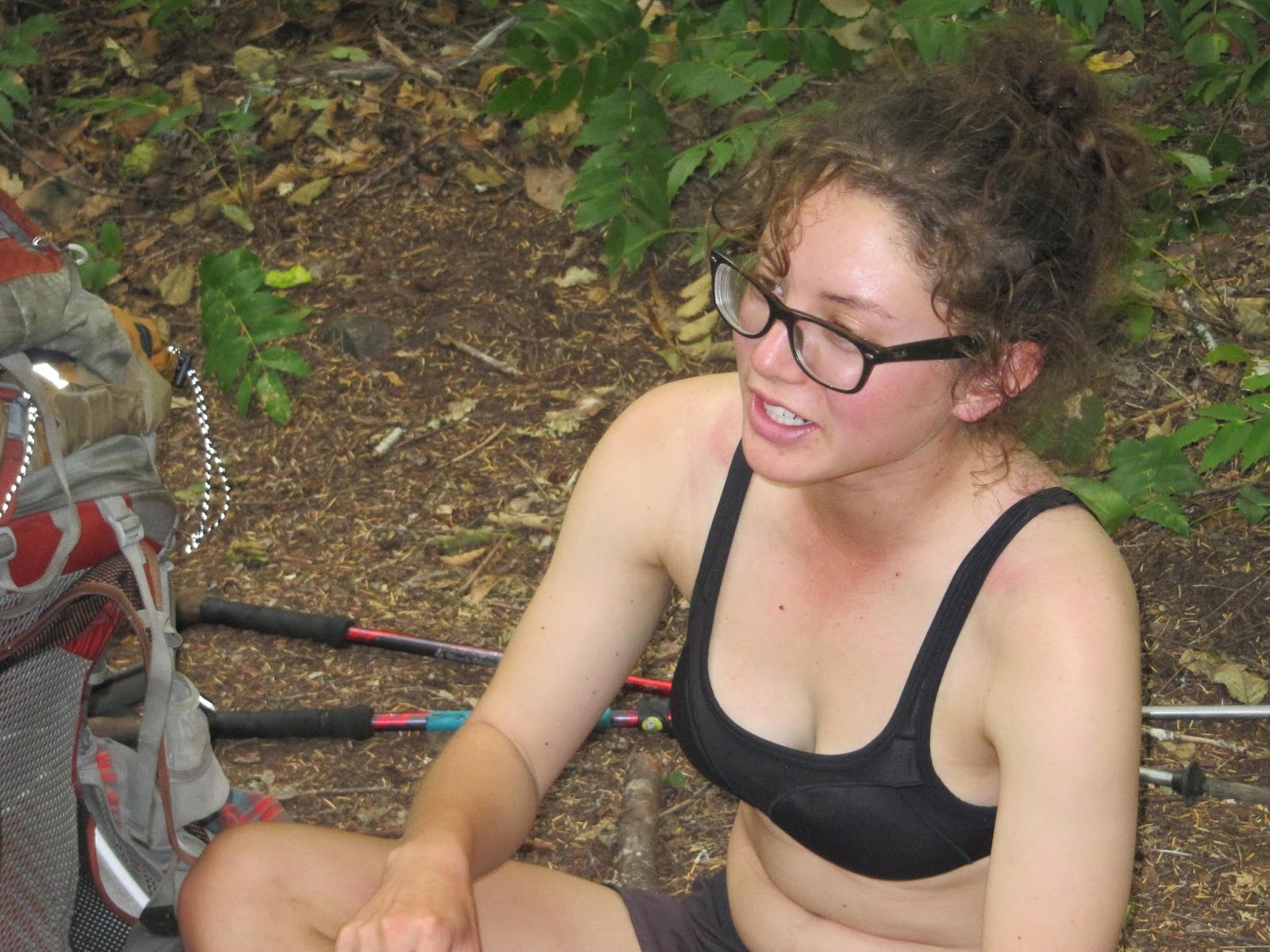 Her trail name is Sailor Moon and she was fast hiker.