The stairs connected to a circular lobby on the second floor in the center of which stood a magnificent stone fireplace that exhibited the stonework skills of old-world craftsmen who lived in an era when pride in workmanship still accounted for something.  Surrounding the fireplace that had seen generations of skiers enjoying the warmth and coziness of its roaring fire were padded benches and plush lounge chairs where one could relax after a trying day on the slopes.  On the floor in front of the fireplace, stacked like wooden soldiers, were a dozen backpacks; I placed mine beside them, making sure it didn’t knock the others over and proceeded to the dining hall.  I was almost late for breakfast.

Most of the hikers were seated at a large table just inside the entrance to the dining room. I extended a greeting to all those sitting around the table, for I knew and recognized all of them and could greet each one by their trail name.  There were no seats available at this table, so my hostess led me to a smaller table where I sat alone, but within earshot of those at the larger table.

The dining room was filled with vacationing tourists, and the hikers with their tattered clothes, full beards, cutoff shorts, and unruly hair were a distinct standout from the other guests. It would not be hard to judge these individuals as being homeless, who just happened to have a credit card in their procession.

Without hesitation, I got up from my table and threaded my way around the other guests seated at their tables to the head of the buffet line and loaded up on fruit, juice, and three yogurts; I would later go back for the heavier stuff like ham and bacon, sausages, eggs, potatoes, and then do it all over again.  This was an amazing meal in a chateau-like setting, well worth hiking twenty-one hundred miles to experience.

Somewhere in this complex of stone and concrete buildings was a sanctuary that held hiker resupply boxes.  After a few inquiries, I discovered that the packages were being kept at a facility on the grounds called the Wy’East Building.

As added information, my informant said that the building was constructed in 1981 to house all ski services in order to reduce wear and tear on the historic lodge
.
There were several packages waiting for me at the Wy’East Building, a facility that housed ski rentals, lift ticket purchases, a small restaurant and gift store; and from the back entrance to the building, one could walk directly to the chairlifts that would take the skier or snowboarder to the top of Palmer Glacier.

I gathered my packages and took them back to the lodge, to the lobby area with the stone fireplace, so I can sit in an easy chair and sort through my supplies.  Of greatest interest to me was the separate package from Jodie which contained an iPod shuffle, a one-and-a-half-inch-square electronic marvel with four gig of memory space on which could be downloaded music and books on tape.  I told Jodie that after two thousand miles of listening to the same conversations in my head over and over again, I needed and wanted something else to listen to; I wanted the convenience that so many other hikers on the trail were enjoying - music and stories to listen to.

Cookie listened to Lord of the Rings as she walked, while a hiker named VP – for Veggie Power, listened to Radiolab podcasts produced by NPR.  My daughter, Allison, who works as a nurse, spent a day and a night downloading music onto the iPod, for which I was very grateful.

By one thirty in the afternoon, I was ready to leave the lodge.  Only Lt. Dan was in the lobby with me, and he was engrossed in reading a book.  All other hikers who were at breakfast this morning have left.

I was grateful that the trail builders had routed the trail to this magnificent edifice; it would have been a shame if the trail instead had been constructed around the base of the mountain.  The Timberline Lodge is a world-class hotel, much like the lodge at Grand Canyon or the luxury Banff Springs Hotel in Alberta, Canada.  It was conceived as a WPA (Works Progress Administration) project during the Great Depression years of 1936-1938.  It gave work to hundreds of men during these difficult times, and when completed it was dedicated by President Franklin D. Roosevelt. (Timberline) 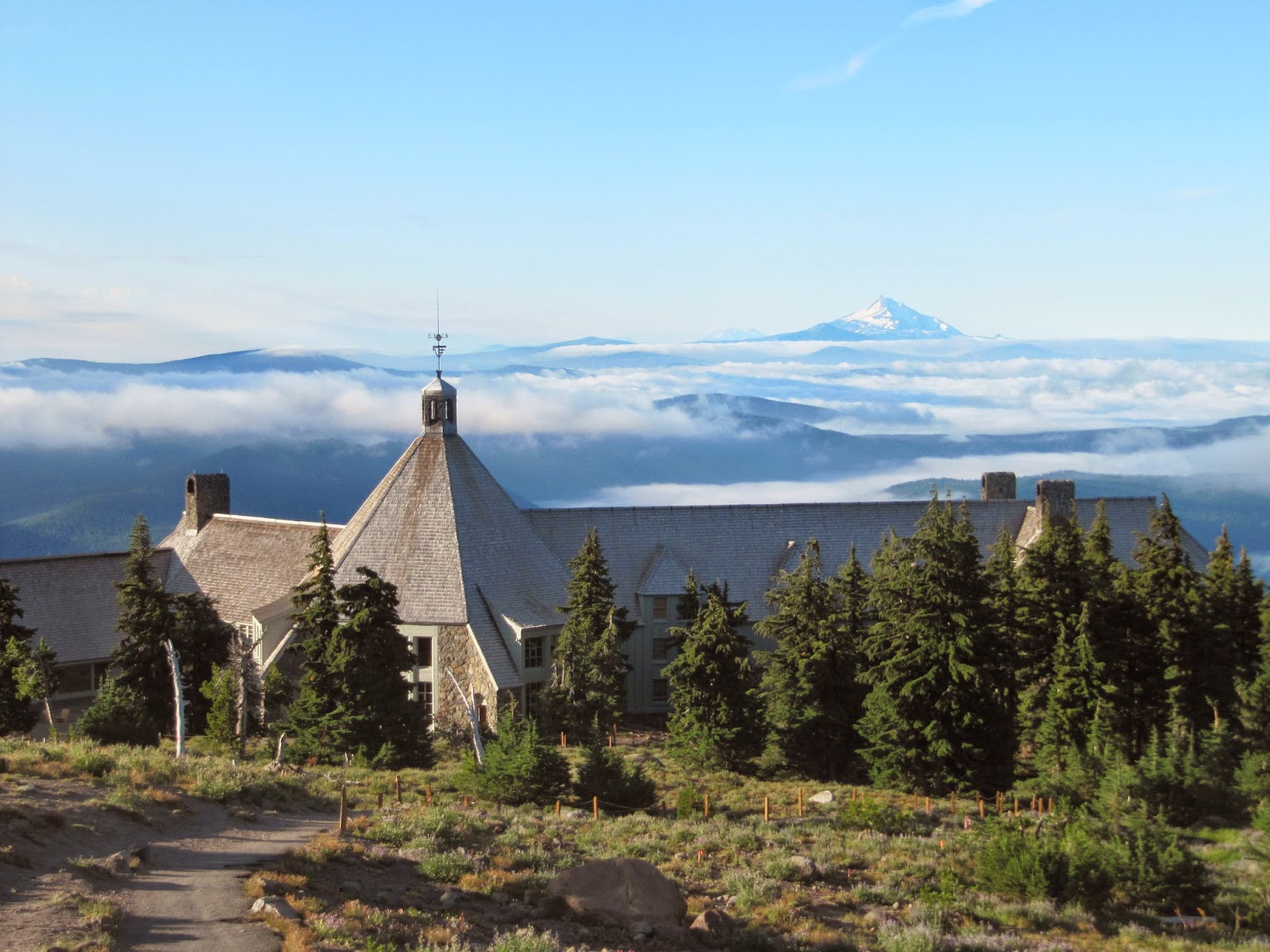 Walking to the lodge from the backside. 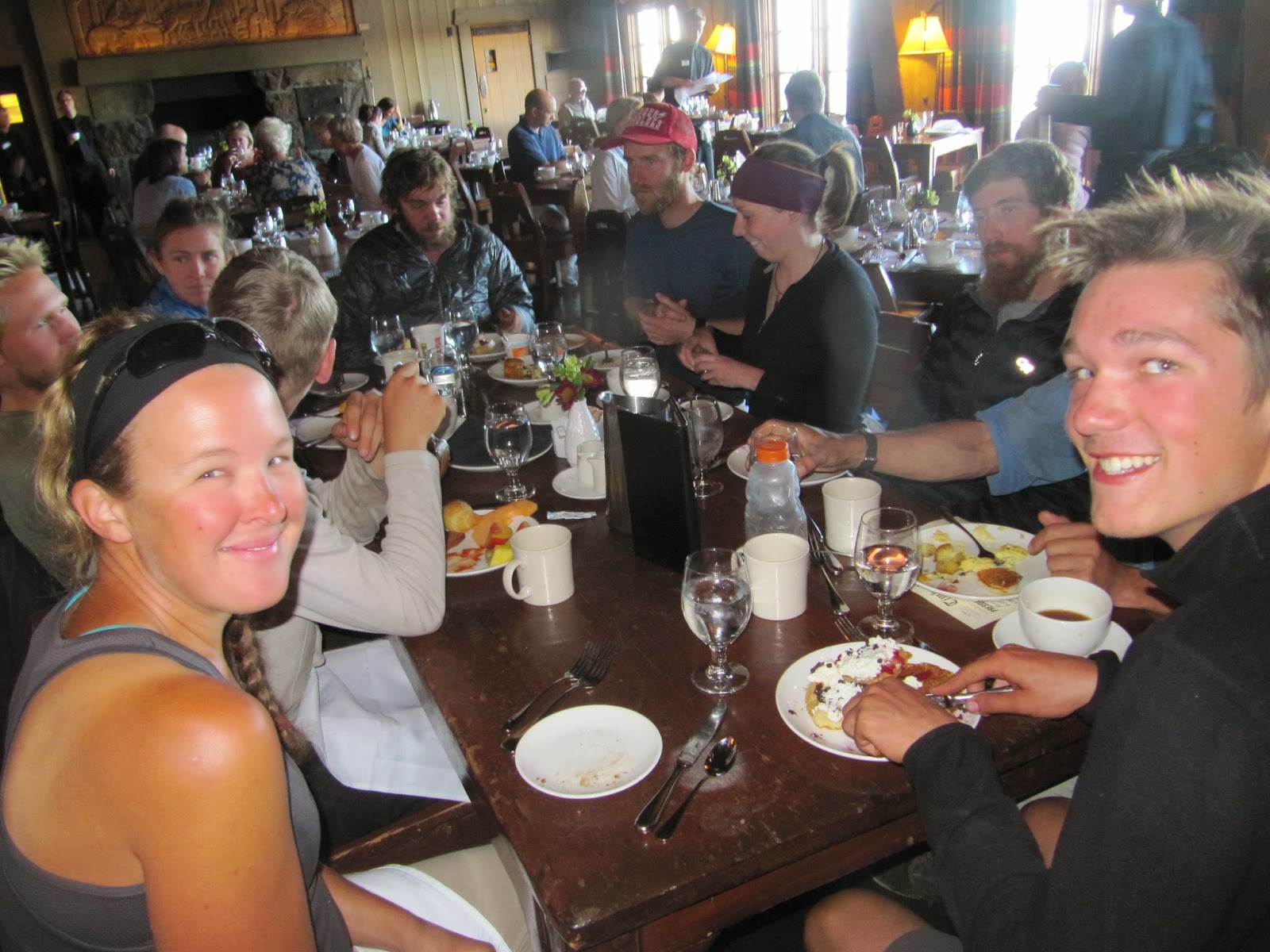 Even though I left very early this morning, I was still late getting to breakfast. Most of the PCT hikers are assembled at this very large table, but there was no more room, so I was seated at a small table next to them. 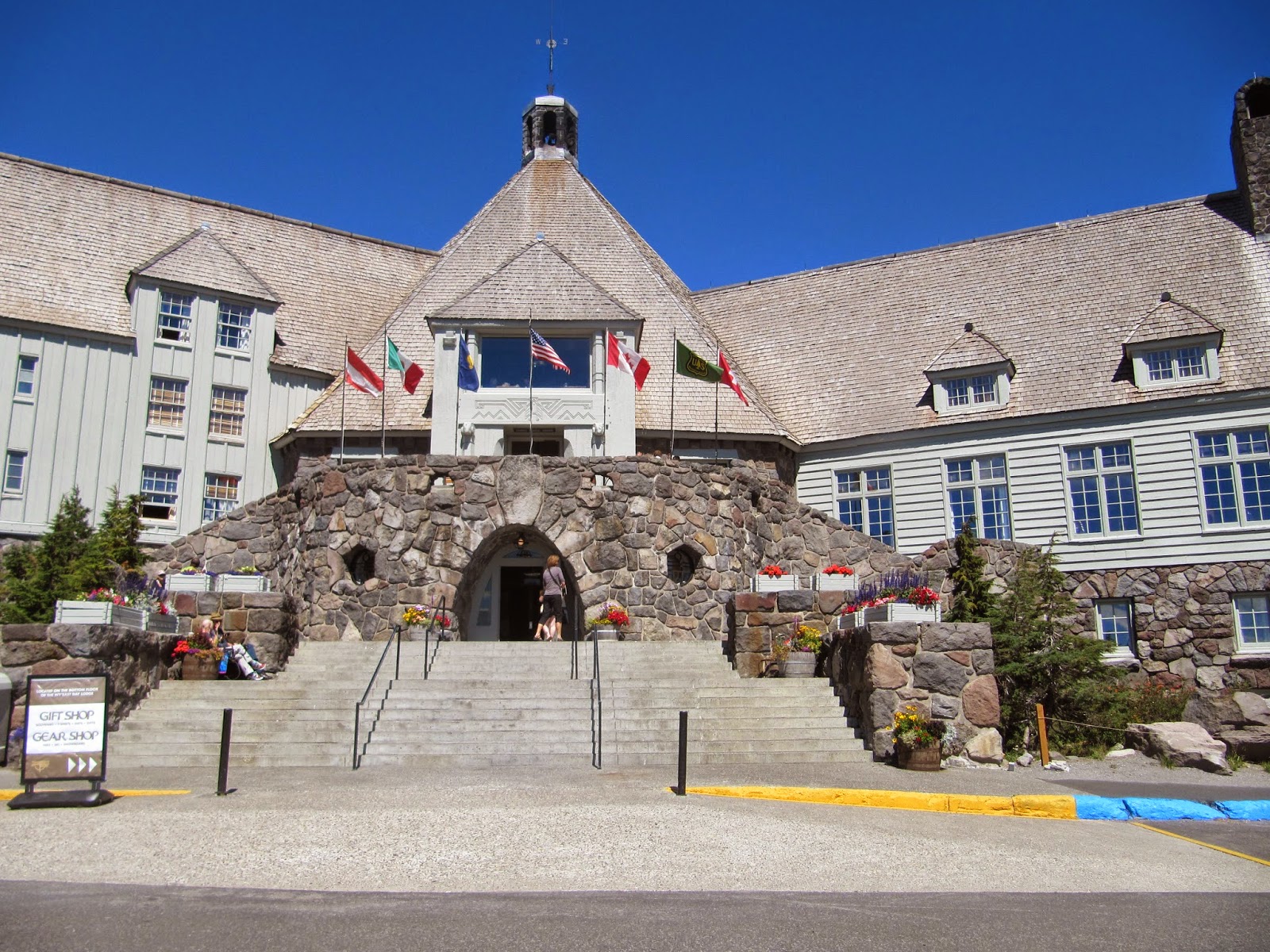 This is the front of  the world class Timberline Lodge. 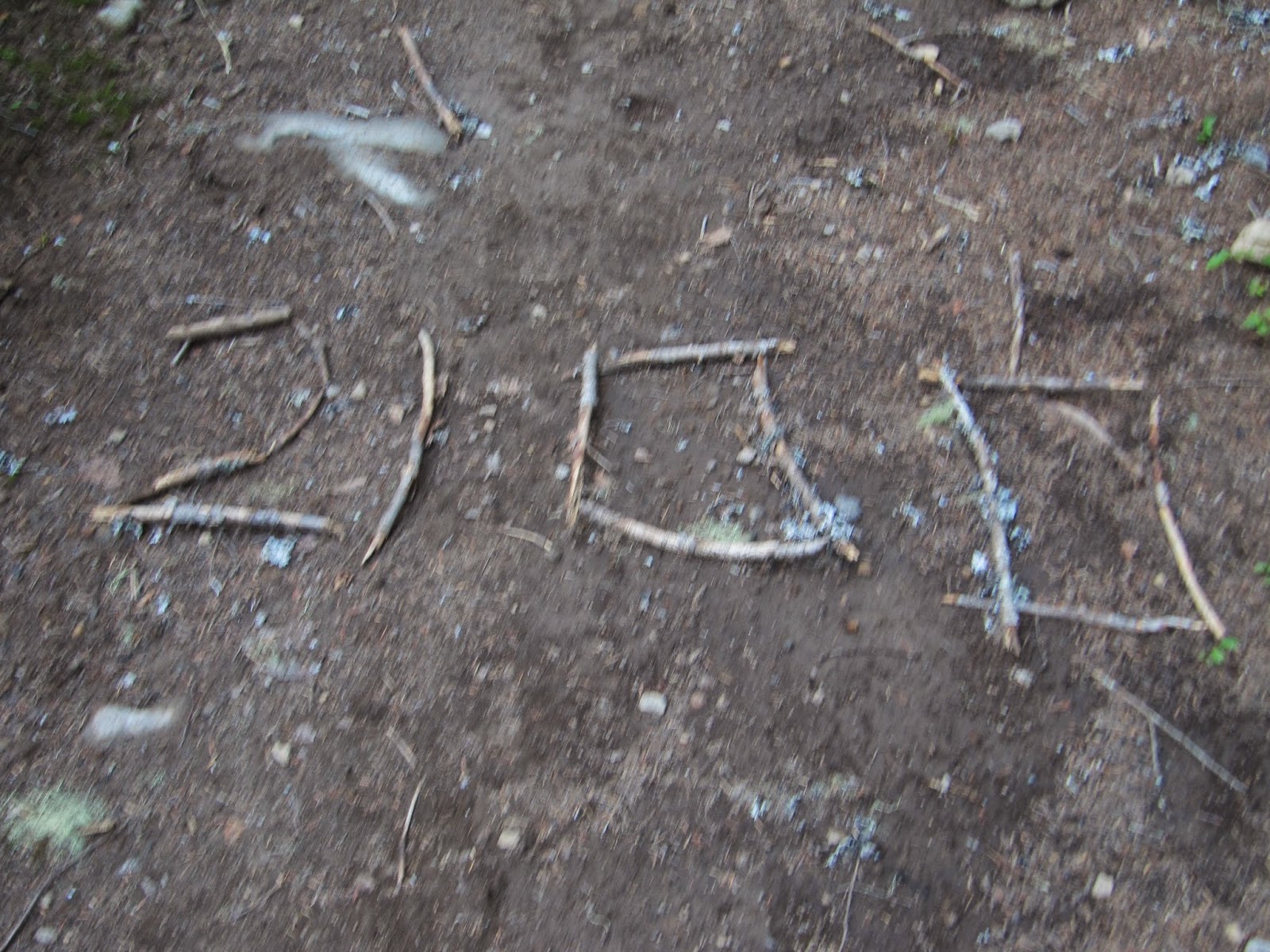 As usual, someone makes notice of the mileage. 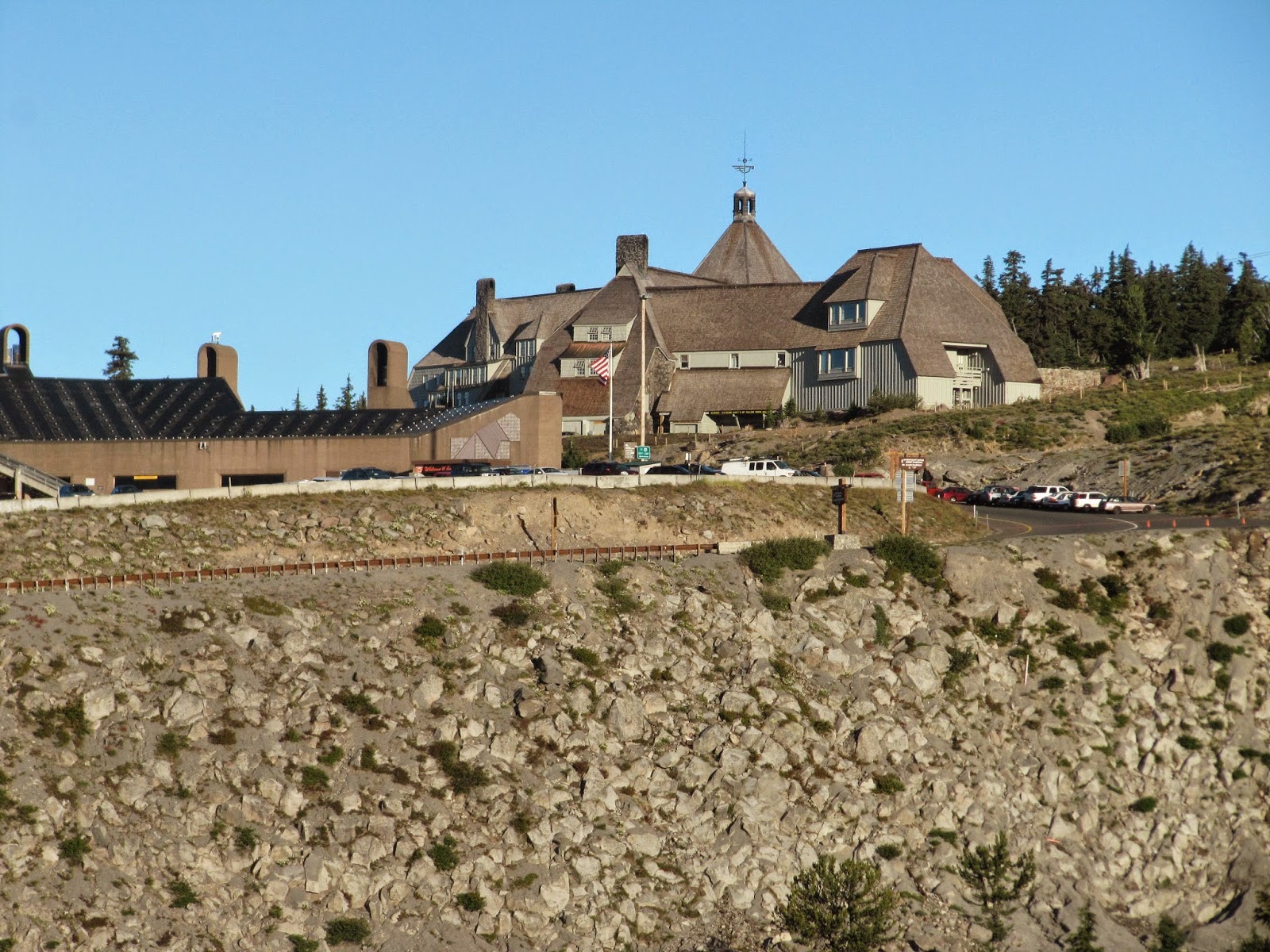 The trail approaches the lodge from the side, then goes up around the back.. The lodge itself sits at the edge of a very deep gully.