Forty years later, when upstream travel became a reality, the need for able-bodied men to assist with portage, as well as towing craft upriver, became even greater; thus, were the humble beginnings of the settlement that eventually became known as Cascade Locks.

As early as 1875, the United States government approved plans for a set of locks to be built on the Oregon side of the river.  Construction began in 1878 and the locks were completed in 1896, and the town of Cascade Locks was firmly established.  But all that changed in 1938 with the completion of the Bonneville Dam just three miles downriver from Cascade Locks.  The reservoir, which backed up behind the dam, inundated the locks until today only a small remnant of cut stone that lined the walls of the locks can be seen above the reservoir’s surface.

Early photographs of the river opposite the town of Cascade Locks show a large rapid with many rocks protruding above the water’s surface that has a drop of twenty-one feet.  For modern-day river runners, running this rapid would have presented only a moderate challenge, as the river at this point is wide and there were clear paths through the jumble of rocks. (Port)

The rapids were formed by a massive landslide known as the Bonneville Landslide that roared down Table Mountain from the north side of the river.  Over time, the river ate away at the base of the mountain, until finally gravity took over and sent a formidable mass of rock, rubble, and trees cascading into the river and across it to the Oregon side, damming it to a height of two hundred feet and three and a half miles long, with debris forming a massive lake behind it. This geological event occurred perhaps as late as AD 1700. (Hill)

For the first time ever, local Indians could travel from one side of the river to the other, without getting their feet wet.  They are the ones who gave this land bridge the name Bridge of the Gods.  Eventually, the river broke through the dam and washed much of the debris downriver.  The rocks in the channel across from the town of Cascade Locks are all that remained of that cataclysmic event.

Passing under the Bridge of the Gods, the first business establishment I came to was the Char Burger restaurant.  As I contemplated whether to go in versus finding a motel room, I was caught up in the vortex of baked goods, chocolate milkshakes, and salty French fries, and the decision became a no-brainer.

I opened the doors and walked into the restaurant and immediately spotted an empty booth on the far side of the restaurant, with giant plate-glass windows that overlooked the Columbia River; it had my name on it.  I unloaded my pack onto one of the seats and sat my trekking poles on top of the pack.  I then looked around the restaurant to see if there were other hikers present and to ascertain the layout of the dining room.  Only Feather, the twenty-two-year-old Swedish hiker, was present, and he was just finishing his meal.  We visited for a second; I asked him if he was going to overnight in town or move on, and he said he was moving on.  He said he was anxious to get the trip over with and didn’t want to waste time just hanging out in town.

Earlier in our journey when we had an opportunity to visit, I mentioned to him that my ancestors, Ola and Anna Andersson, came from the tiny village of Slimminge, Malmohus, in the south of Sweden.  It turned out that this village was only eighty-five miles south of the city of Halmstad, which is Feather’s hometown.  I told him that Ola and Anna, with their five children, along with Sorenson relatives from Copenhagen, Denmark; McKay relatives from Johnstone, Scotland; Jones relatives from Wales; and Smithies relatives from Preston, England, all immigrated to the United States in the 1850s and came as pioneers to Utah and converts to the Church of Jesus Christ of Latter-day Saints, more commonly known as Mormons.  Some came with wagon trains, some made the journey with handcarts, but most walked the eleven hundred miles from Winter Quarters (near Omaha, Nebraska) to the Valley of the Great Salt Lake.

I’m grateful for these several sets of great-great-grandparents, who were willing to make the great sacrifice to leave their homes, their families, their country, and most of their material wealth to make a new life in the desert valleys of the Rocky Mountains.  I am the beneficiary of their sacrifice and hard work in taming the land and establishing homes and communities in a desert land that no one else wanted.

Feather, along with his friend, Laptop, are both from Halmstad.  Someday, I hope to visit Sweden, to see the ancestral home of Ola and Anna Andersson, and hopefully visit these two young men who hiked the Pacific Crest Trail with me, and for whom I have high regard.

The restaurant was set up buffet style; with food tray in hand, one walks along the food aisle picking and choosing items to place on the tray, and then at the end of the aisle paying the cashier for the items.  One should never go shopping when one is hungry, especially a PCT hiker who is perpetually hungry.  I couldn’t resist the vast array of tempting food choices and when I placed my food tray in front of the cashier, my total came to twenty-six dollars, my most expensive meal for the entire journey. 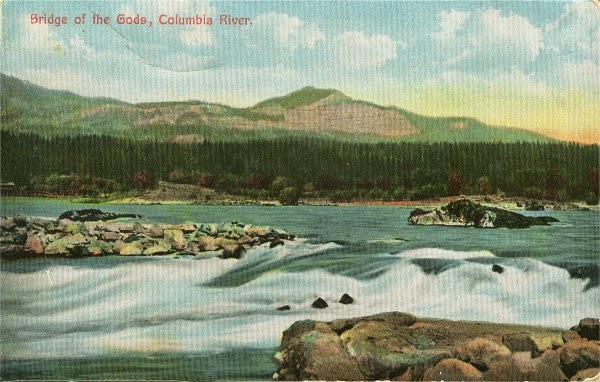 A Penny Post Card picture of the Cascade Falls before they were inundated.