Slow but steady, I’m making progress along the trail and across the seven hundred miles of Southern California desert.  In a week’s time, I can travel, on average, about 120 miles.  In three more weeks, I should arrive at Kennedy Meadows South, which means I will have successfully crossed the arid desert lands of SoCal, and will soon be entering the snow-covered peaks of the High Sierras.  I’m excited and focused.

By early afternoon, I arrived at the deserted and almost abandoned North Fork Ranger Station Campground.  In times past, it looked like the campground has been heavily used, but now no living soul was visible on the premises.  The only sound was a muffled voice that crackled from a loudspeaker attached to a building somewhere in the cluster of buildings that formed the ranger station compound.  Forest Service personnel somewhere were using a walkie-talkie to transmit messages and this deserted Forest Service campground was still tied into the communications system.

Because the Forest Service knows that this campground is a vital water source for desert hikers, and because all water spigots in the campground have been turned off, the Forest Service maintains a water cache of about seventy gallons in large five-gallon containers, similar to those Culligan uses for home delivery.  Upon entering the campground, a sign directed hikers to picnic tables located behind a giant propane tank on which sit the five-gallon containers.  I drank a liter of water and then filled my four one-liter plastic water containers.  I was now set for the last leg of today’s desert journey and final destination – the Acton KOA, which had showers, a swimming pool, and access to pizza and Chinese food in the nearby town of Acton.

In the aftermath of the 2009 Station Fire burn, an invasive plant that thrives in disturbed soil, especially following a forest fire, began to take root along the PCT.  Its benevolent name – Poodle-dog bush, hides its sinister and menacing features that can attack and incapacitate certain, susceptible humans.  It secretes oil that oozes from its leaves and upon contact with skin causes irritation with symptoms that range from a mild rash to severe respiratory distress.

Poodle-dog bush is like poison oak, but perhaps a bit more severe.  Not long after leaving the North Fork Ranger Station, old Poodle-dog bush began showing up along the trail, only a few bushes at first, then becoming increasingly concentrated until at last the whole trail was overgrown with this hiker’s nemesis.  Hikers who were squeamish about the bush and its effects, or who felt they may be susceptible to contracting skin rashes, had the option of doing a roadwalk that bypassed the more concentrated toxic portion of the trail.

As for myself, I paid it no attention.  I was wearing long pants and a long-sleeve shirt, and as I passed through the bushes, I would turn this way and that way to avoid having my hands touch the leaves.  I was following two female hikers who were wearing shorts, and it was most interesting to watch them do the Poodle-dog dance, as they flitted and gyrated along the trail trying to avoid any contact whatsoever with the plant.  Poodle-dog bush is most prevalent from approximately mile 419 to 430.

It didn’t take long to cover the remaining nine miles from the North Fork Ranger Station to Soledad Canyon and the end of the San Gabriel Mountains.  The trail grade was predominantly downhill, but it was horribly dry and covered with the charred remains of the Station Fire burn.  As the trail continued its descent to the canyon floor, the blackened stumps and fallen trees were left behind, and the only ground cover was dry chaparral.

Not too far ahead of me, I saw two hikers stop and consult their maps.  It appeared that they had stopped at a trail junction of sorts and were trying to determine whether to follow the trail as it contoured around a large hill, or take an apparent shortcut that dropped directly down to the paved highway in Soledad Canyon.  They took the shortcut, which was a Jeep road, and when I reached the same place, I too took the shortcut.  Just before reaching the highway pavement, I discovered a trail magic cache of cold sodas, water, Gatorade, and snacks.  It was put there by the owners of the Acton KOA with an invitation to come and stay at their facility.  I tanked up on a couple of Gatorades and headed towards the KOA.  I didn’t need an invitation - I couldn’t get there fast enough. 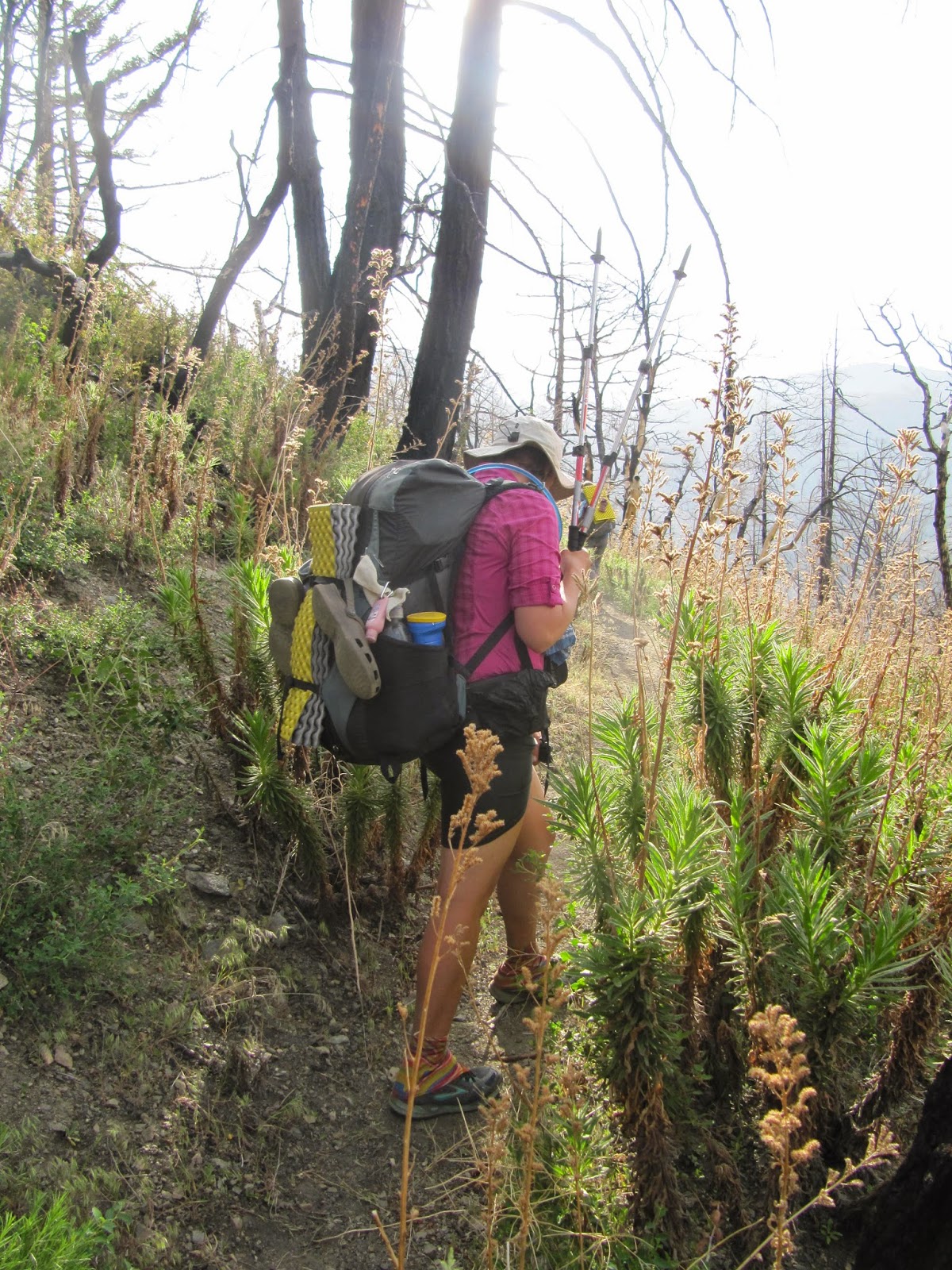 Female hiker doing the Poodle Dog Bush dance, trying desperately not to let her bare skin come in contact with the oily, green leaves of the Poodle Dog Bus. Because I was wearing a long sleeve shirt and long pants, I just plowed my way through the bushes.