It was only ten miles to Agua Dulce, my next resupply point, but I knew it was going to be hot the next day, so I wanted to get away early.  I set my internal clock for 3 a.m. and went to bed.  I love my internal clock because it rarely fails me; at 3 a.m. I was wide awake and within a half hour, I was packed up and ready to move out.

With the aid of my headlamp, I walked back down the highway until I found the PCT logo that showed where the trail left the highway and plunged down the embankment and into the foliage adjacent to the trail.  In the first hundred yards from the trail there was a lot of debris - construction material and abandoned house trailers; in essence, it looked like a dumping ground for locals.

A much-polluted stream (it turned out this was the Santa Clara River) ran through the underbrush; frogs and crickets and early morning birds called to one another.  A set of railroad tracks came into view and I quickly crossed over them and headed up into the mountains.  It was peaceful and serene walking in the early morning hours; from high on the mountains, I could see the faint light beams of two headlamps bobbing up and down as two additional early morning hikers made their way up the mountain.

Looking back down the canyon, I could see the lights of the KOA campground and homes scattered along the Soledad highway.

From the south down Soledad Canyon, I could hear the whistles of an approaching train, so I stood and watched as a passenger train advanced, its whistles blaring and its lights flashing as it moved through street intersections.  I love to watch trains; they always seem so surreal.  Within a mile, another early morning hiker passed me, and way, way up the mountain, I could see hikers as they made their way up the mountainside
.
By 9:00 a.m. I was walking along the top of the mountain ridge, and from my vantage point far to the north, I could see the Antelope Valley Freeway 14 which connected the Los Angeles area to Lancaster and Mojave, California.  Presently, I came upon two hikers – Faucet and Shark Bite, who were sitting on the ground to the side of the trail, getting ready to prepare their morning breakfast.  It looked like a great place to stop for the same purpose, so I asked if I could join them.
“Of course,” they said, “sit here beside us.”

While they prepared and ate their hot oatmeal with raisins and cinnamon, I ate my cold, rehydrated concoction of Idahoan Instant Potatoes, crushed nuts, crushed Frito-Lay chips, dried tomatoes, and spices.  It’s really a pretty good meal; it’s filling and high in calories, both of which are highly desirable on the trail.  Faucet and Shark Bite were back on the trail before I was, so when I finally left, I once again walked alone.

From the ridge, it was all downhill to the freeway, and as I approached the highway, I could see that traffic heading towards Los Angeles was not moving; well, crawling slower than a snail’s pace. To get across the freeway, the trail went underneath it via a giant, metal culvert.

Before the freeway was built, the trail in this area passed through a rather large ravine that funneled the occasional flood waters of seasonal rains to lowlands somewhere farther out in the desert.  To accommodate the freeway, this gigantic gulch had to be filled in, but the trail for both hikers and horses had to be preserved.  The solution was to place a culvert in the gulch big enough for horses to walk through, and then fill in the ravine with tons and tons of dirt and gravel to provide a flat surface for the freeway.
Emerging from the five-hundred-foot-long, ten-foot-high steel tunnel, the trail entered Escondido Canyon and meandered along a sandy streambed lined with willows and thickets of squaw bush.
On the north side of the freeway, the scenery had changed abruptly and the air was noticeably cooler, probably as a result of the high canyon walls shielding the lower streambed from the rays of the glaring sun.  A large variety of trees, shrubs, and bushes hugged the flowing stream in an effort to suck up as much water as possible in order to maintain their radiant mantle of green.  Then, as usual, the trail began an upward climb, passing through multiple layers of river-deposited rocks known as conglomerate.
Tiburcio Vasquez the Bandido

This noted change in scenery and rock formation meant I had entered the Vasquez Rock County Park.  This little park was rich in history.  It was named after Mexican/American Bandido Tiburcio Vasquez, who used the unusual rock formations to hide from the law way back in the 1850s.  Vasquez was involved in numerous robberies, spent a number of years in prison, and was present when members of his gang shot and killed innocent bystanders.

In 1874, he took up residence at a friend’s adobe home, located at what is now Melrose Place in West Hollywood.  After a brief shootout with the local sheriff, he was captured, stood trial in San Jose, California, and was found guilty of murder.  He was sent on his way to the great beyond on March 19, 1875.  The only word he uttered at his hanging was “pronto” – quick.  (Tiburcio)

The unique rock formations of this park have been the background scenery for numerous movies, i.e., Star Trek (2009); Holes (2003); Planet of the Apes (2001); and Blazing Saddles (1974); and as I passed by them, I tried hard to visualize some of the scenes from Planet of the Apes that had been filmed here. ( Most)

Within a short distance, I came to Escondido Canyon Road, a major roadway through Agua Dulce.  It was jam-packed with vehicles and people shouting for directions on how to get to the 14 Freeway.  These were drivers who had left the standstill traffic on the Antelope Valley 14 Freeway and were trying to detour through Agua Dulce to bypass the delay and get back onto the 14.  I would later learn that the stoppage on the 14 was due to a large, eighteen-wheeler full of meat that had overturned, blocking all southbound lanes of the 14 Freeway.  The tractor-trailer had to be unloaded by hand before the rig could be uprighted and moved off the road.  I can only assume that it must have been hours before this mess was cleaned up.  Wow!  Such is life in the fast lane in Southern California. 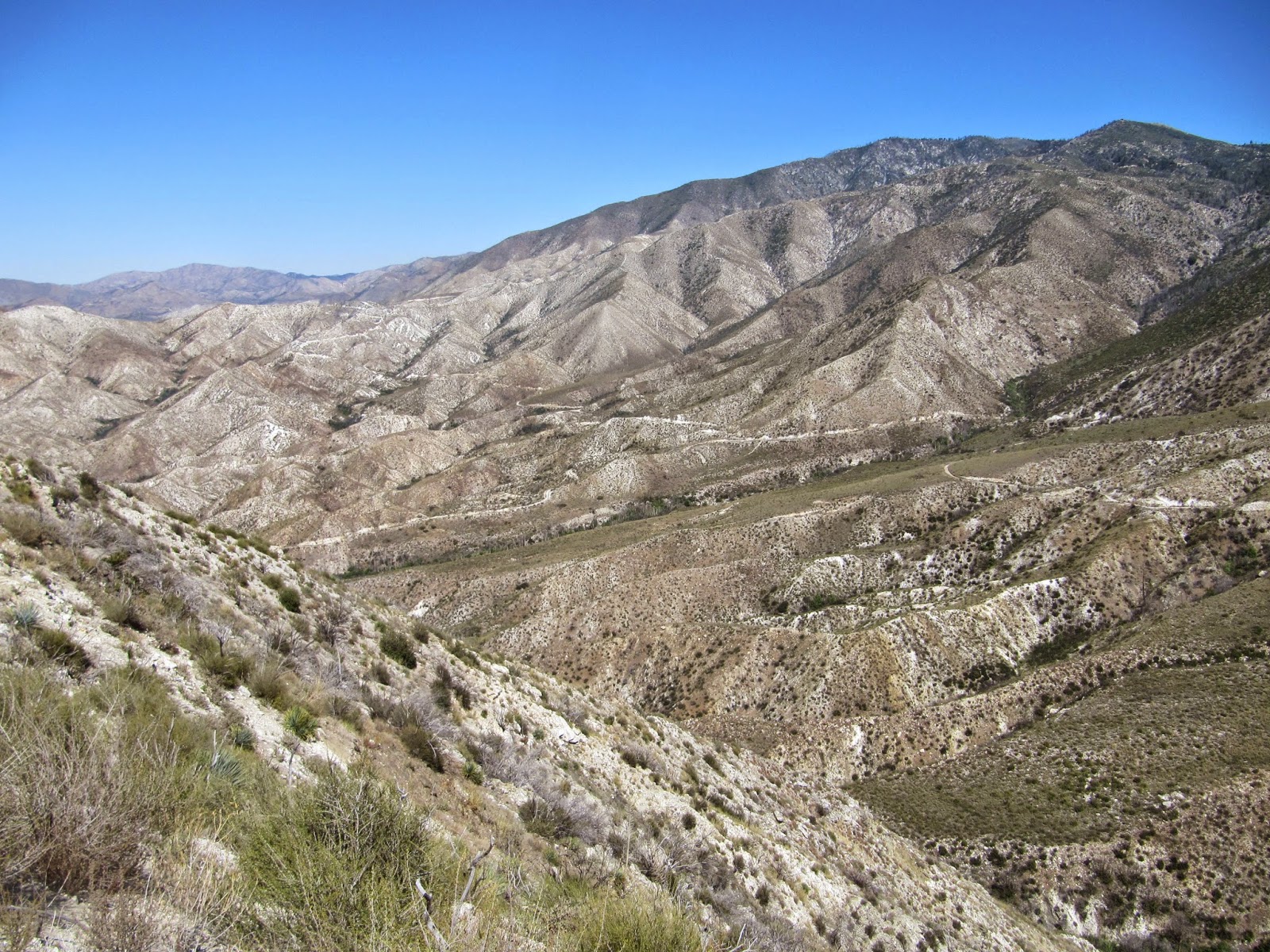 Looking down into Soledad Canyon. After reaching the highway, it was only a short walk to the Acton KOA where I spent the night. 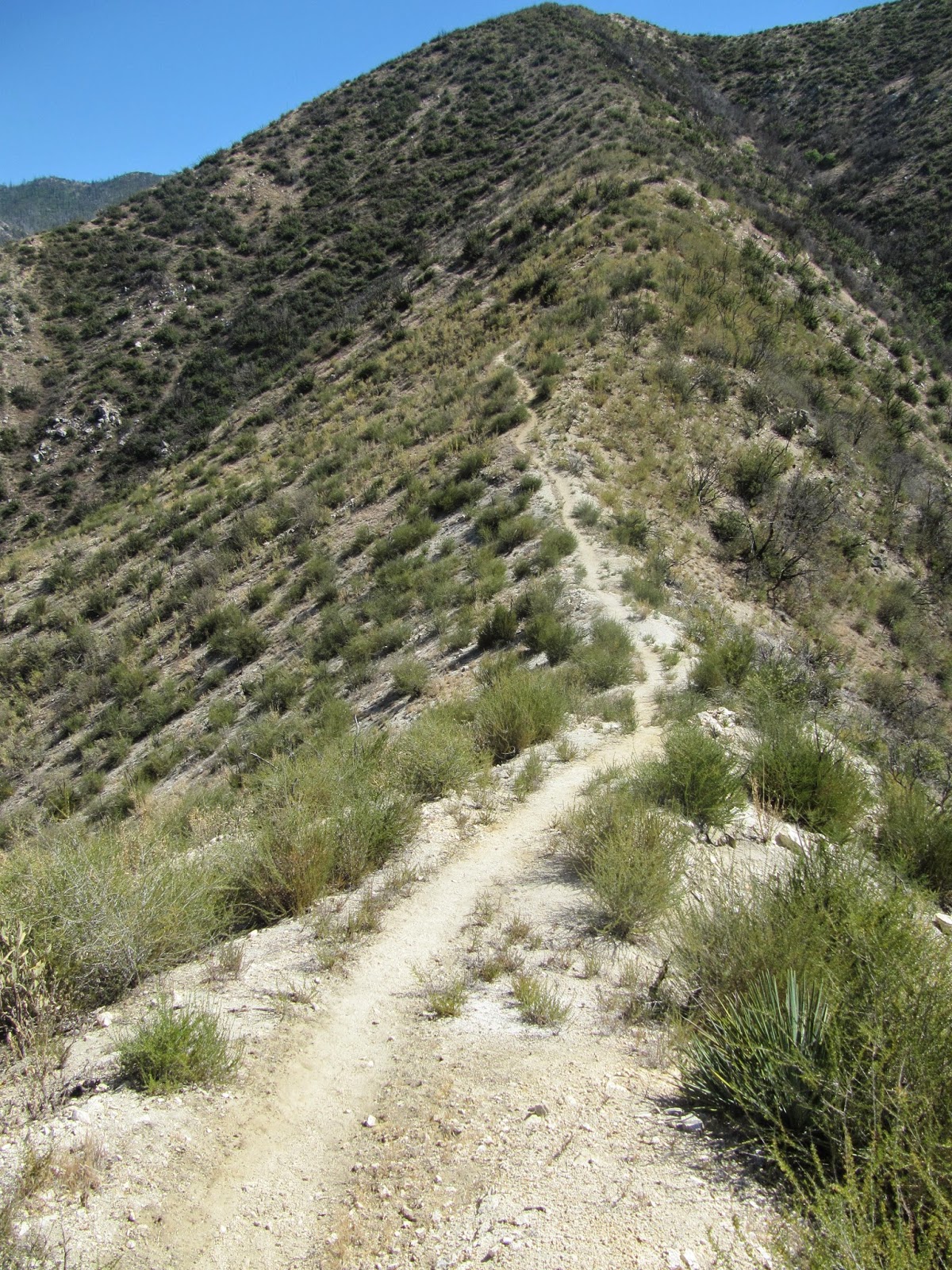 The next morning, I followed this trail as it climbed up the other side of Soledad Canyon on its way to Aqua Dulce. 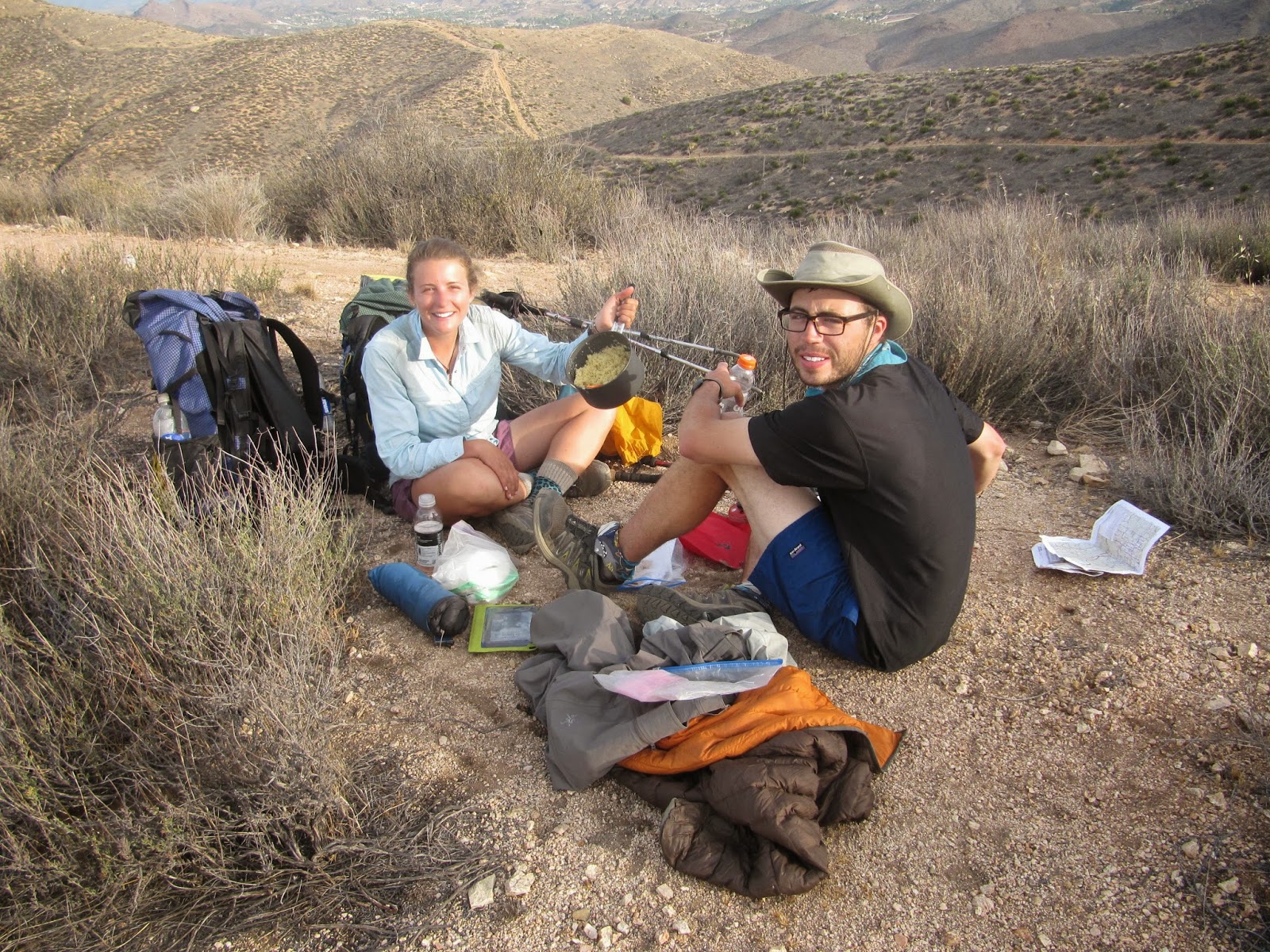 At the top of the summit, I found Faucet and Shark Bite cooking breakfast, I joined them. 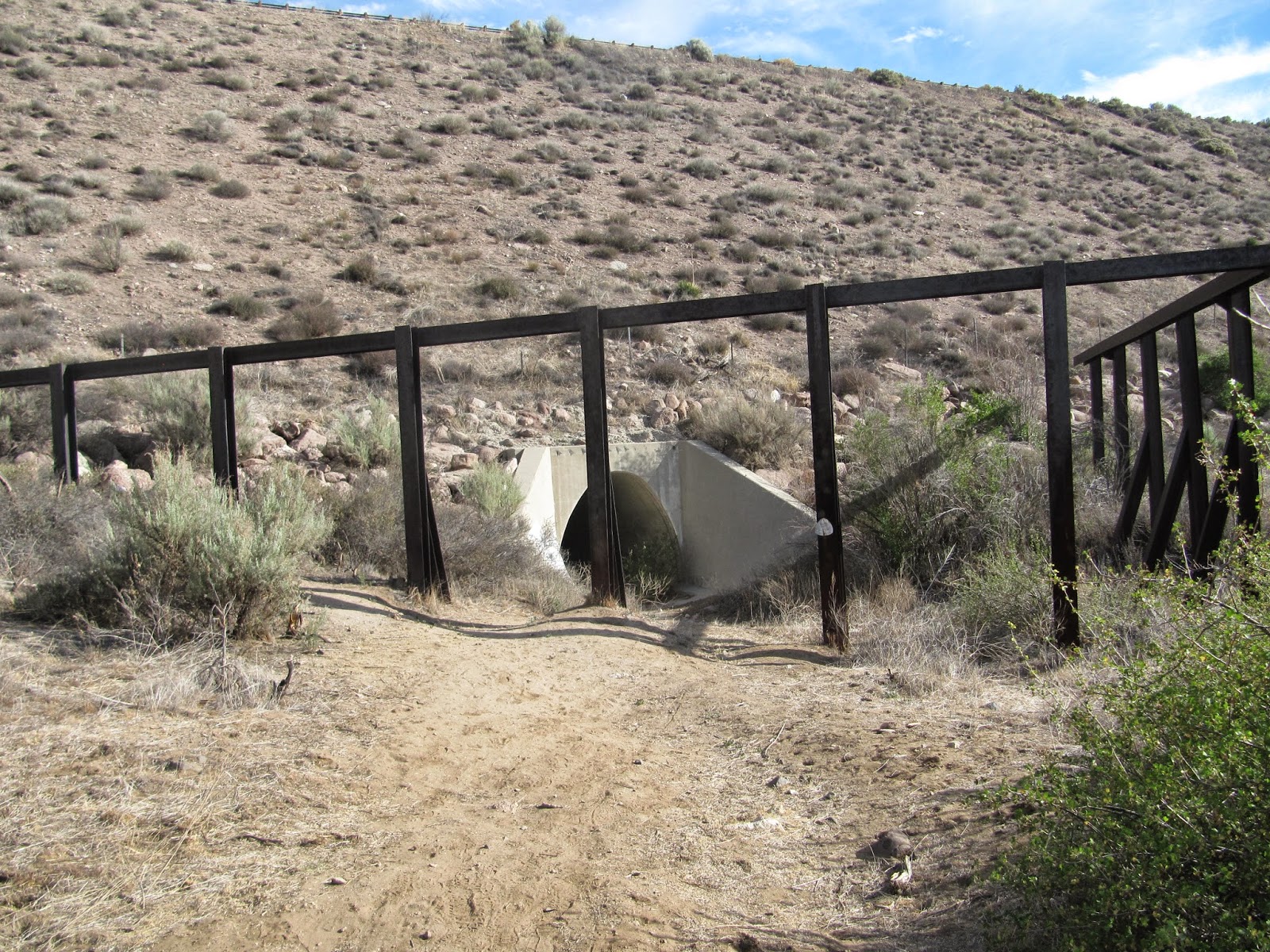 The trail goes under Highway 14, via this 500' steel tunnel. On the other side, I emerged into a canyon with water, lush vegetation and wildlife. 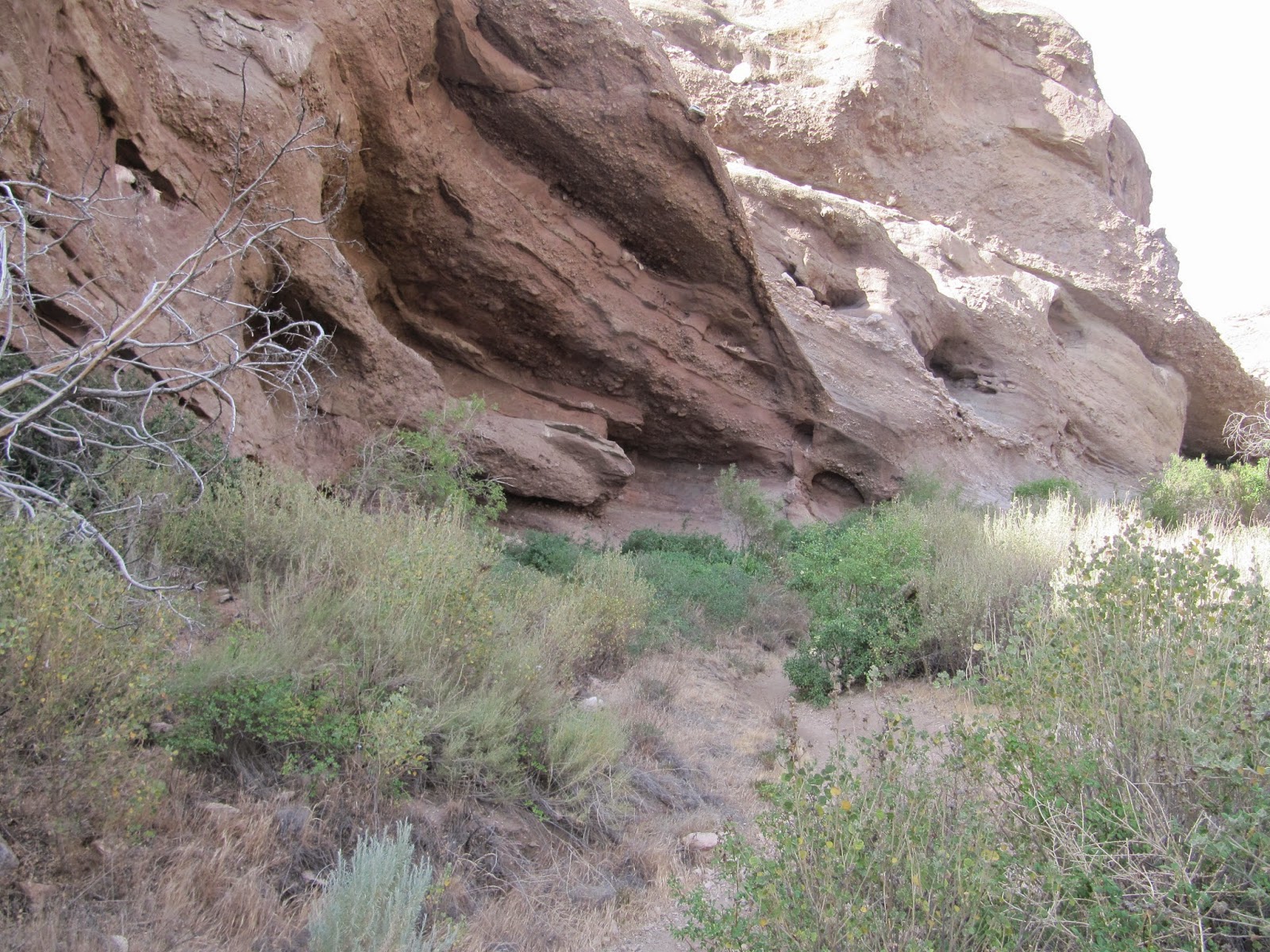 There was water in this canyon, and the city of Aqua Dulce had made a nature trail through the area, complete with signage which described the various bushes and trees. The signs were very interesting to read. 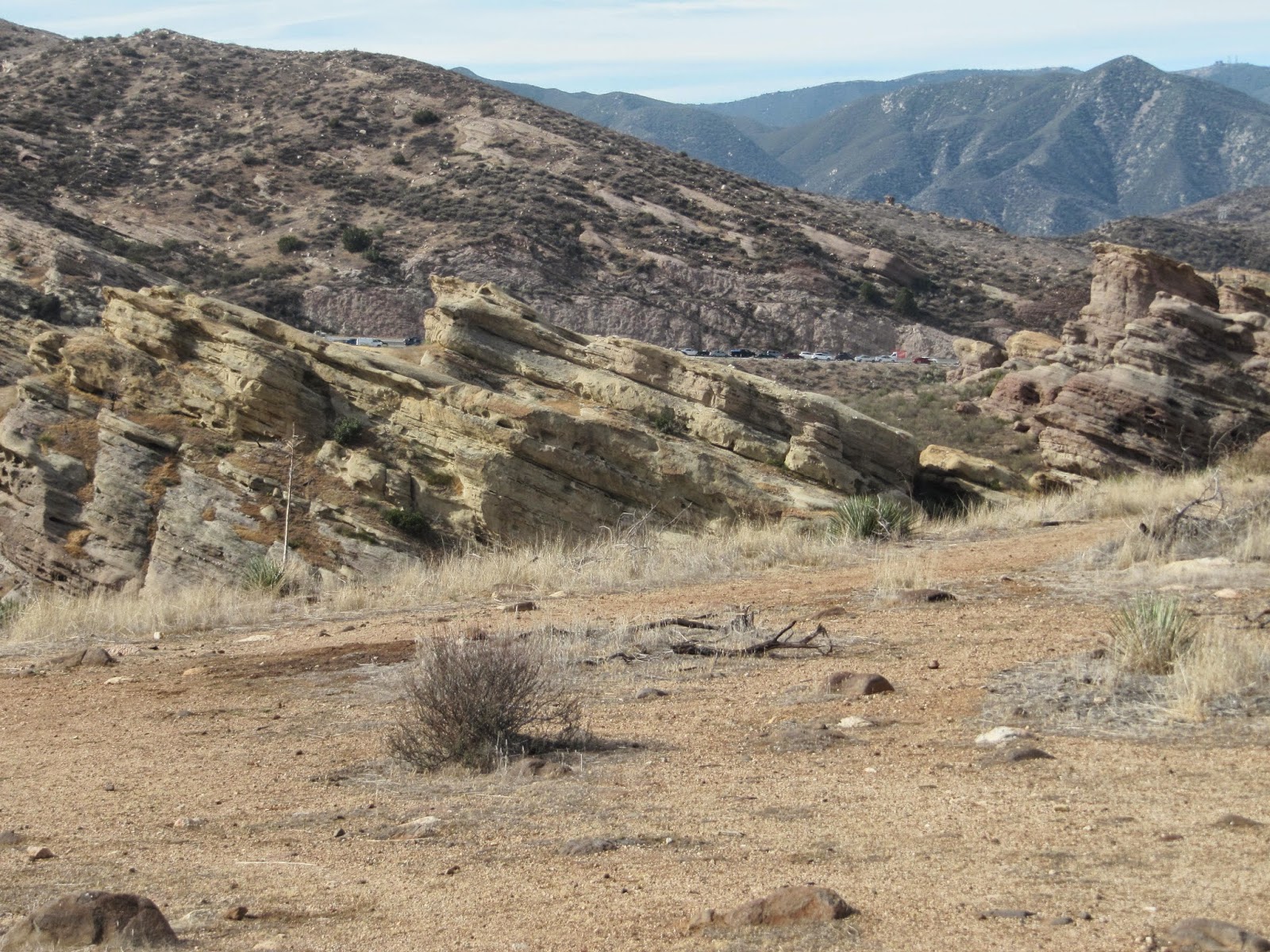 This is the famous Vasquez Rock formation. Many movies have been filmed in and around this location. 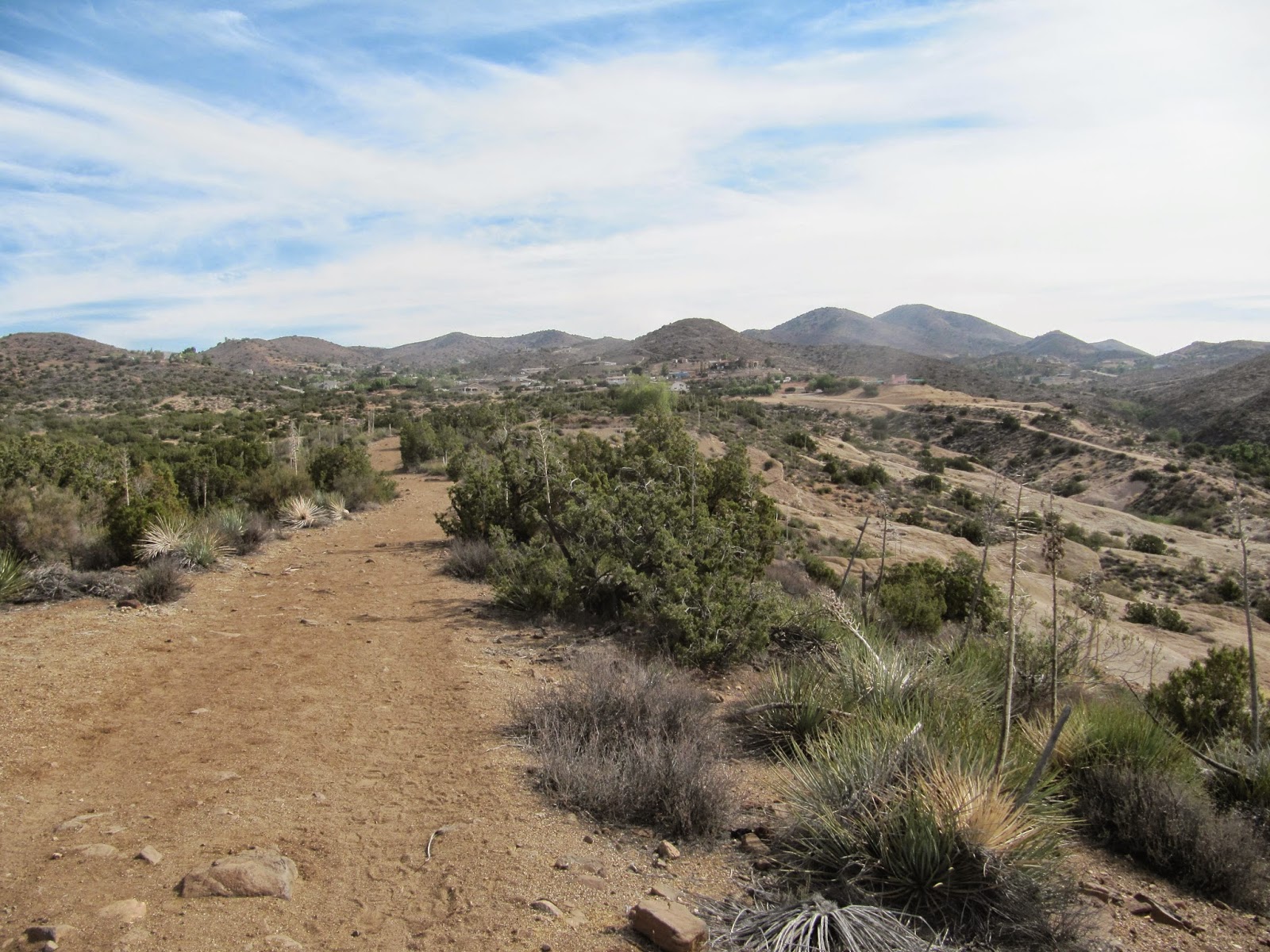 This is the horse trail that leads to Aqua Dulce proper. It passes by a number of horse properties on the outskirts of town.