From the high vista points along Saint John Ridge, I could see the north-extending arm of the Mojave Desert as it snaked its way up into the Owens Valley, the source of water for the Los Angeles Aqueduct.  If I squinted hard and concentrated long enough, I could just barely make out the slender white streaks of eighteen-wheelers moving along Highway 14, which in a few miles would merge with Highway 395, the major thoroughfare along the east side of the Sierras.

Running parallel to and eventually crossing over the PCT was Jawbone Canyon Road and Kelso Valley Road.  I crossed over these access roads, which lead into the Piute Mountains to the west, and took note that if I needed to exit the PCT for any reason, both of these dirt/paved roads would channel me down to Highway 14, some twenty-six miles to the east.

Additional springs and streams continued to pop up along the trail as it stayed high in the mountains, assuring hikers a plentiful supply of water; however, a long hot stretch of desert terrain some twenty miles before crossing paved Highway 178 leading to Bakersfield, was dry and waterless.

Fortunately, a local trail angel named Mary maintained two water caches in this section, which enabled hikers to make it to Highway 178 and additional water.  As I approached the first water cache, I found Kumquat, Tour Guide, and Happy Feet filling their water containers.  The cache consisted of approximately 40 one-gallon water jugs, loosely tied together, to prevent them from blowing away once they were empty, and two dozen green and yellow plastic Squirt soda pop bottles.  Knowing the generosity of trail angels and their willingness to provide liquid other than water, both Happy Feet and I had to sample the soda pop bottles to make sure the contents were water and not the more refreshing Squirt soda pop.  The Squirt bottles only held water.

The water cache was adjacent to a dirt road, which allowed Mary to service the cache.  Across the road and up the hill about a hundred feet was a very large Joshua tree, under which lounged several hikers, looking a lot like a bunch of lizards seeking shade from the unrelenting heat.  The four of us moved towards the tree to see if there might be room for us also.

Under the tree was Shark Bite, Faucet, Walkie Talkie, and a hiker I didn’t know.  Kumquat and Tour Guide elected to continue hiking, while Happy Feet and I joined the others under the tree.  Several of us tried to rest and catch some Z’s, while Shark Bite and Faucet read using their Kindle notebooks; ants and pestering flies prevented me from getting much rest.  Within an hour, Cuddles and Phil joined us – it really was a large Joshua tree, and we all stayed until about four in the afternoon.

I left the shade of the tree first, but within two miles, I was passed by all the others.  Several miles farther on, I found all of them resting again in the shade of another Joshua tree, filling their water containers from supplies at the second water cache maintained by Mary.  I pulled off my pack and sat it in the dirt alongside the others, filled my water bottles, ate some snacks and then moved on.  Everyone else just stayed on the ground as I left.  They could afford to; they weren’t in any hurry, and it would be only a matter of time before they passed me again.

This was true desert I was now hiking through.  Treeless except for Joshua trees, waterless, dry, hot and barren; the trail was filled with sand and loose gravel, and little dust clouds would form around my feet as I climbed upwards.  Always upwards; I swear, the trail always went up, never down.  For the rest of the day, the trail traversed along the sides of steep slopes; the wind was beginning to blow, kicking up sand and nowhere was there a decent place to camp that afforded any protection from the wind.  After a few more bends in the trail, I spotted Cuddles camped in a small valley underneath a lone Joshua tree.  As I approached, he invited me to stay.

It was late in the evening and the prospects for finding anything better were slim to none, so I accepted his offer.  On the other side of the tree was a flattish place, that with a little help from my bulldozer boot, I was able to carve out a space large enough for my bedroll.  The ants were tolerable that night.

It was a clear night and the moon was full.  I set my inner alarm for 4:00 a.m., and by 4:30 a.m., I was on the move.  The lone hiker I met yesterday under the Joshua tree at the first water cache had hiked through this area about this same time last year.  He indicated to Happy Feet that he encountered trail magic at the Walker Pass Campground at Highway 158 - spaghetti dinner with all the trimmings.  That got me and the little band of hikers I was with to thinking that maybe we might be so lucky this year. 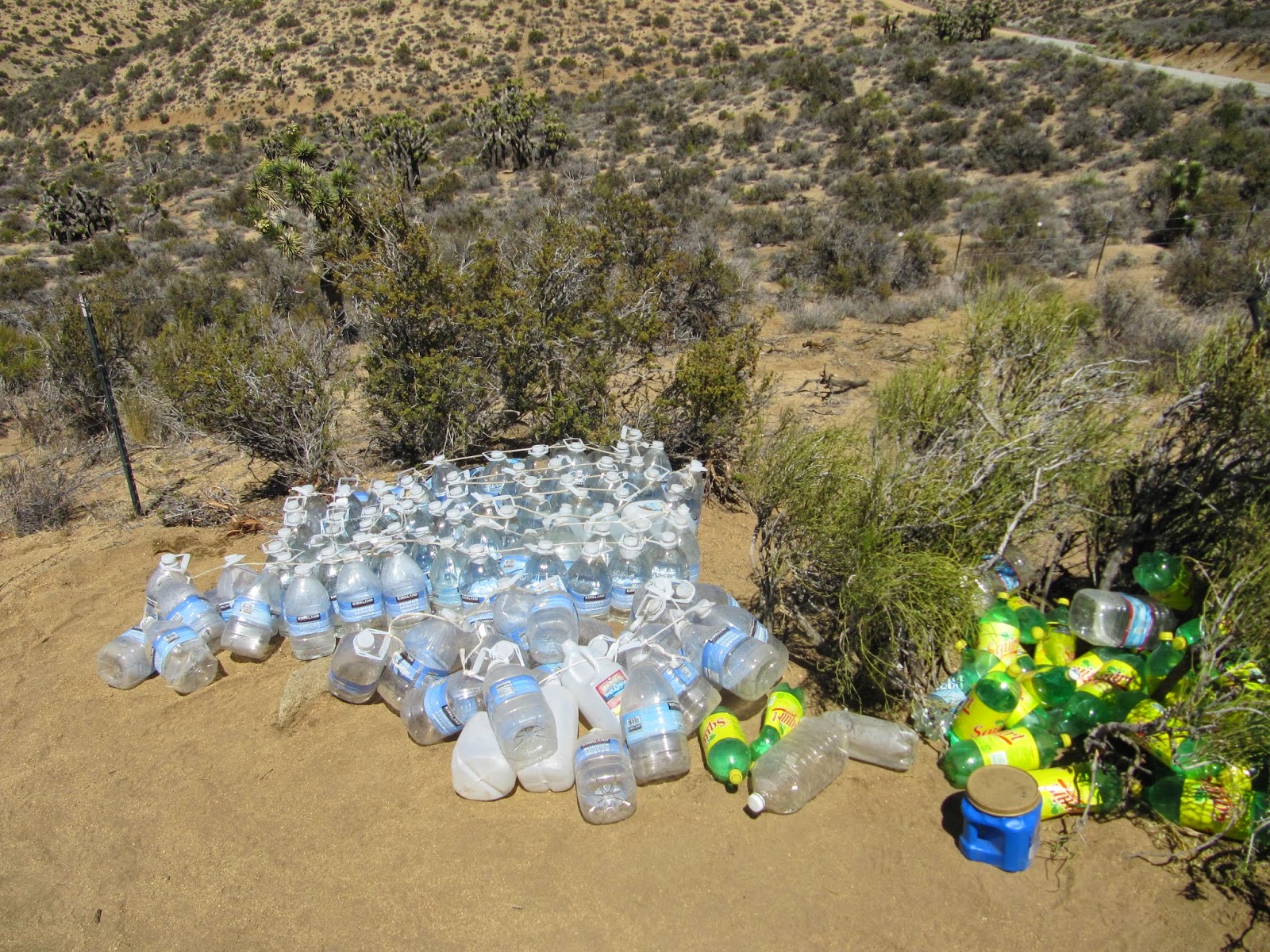 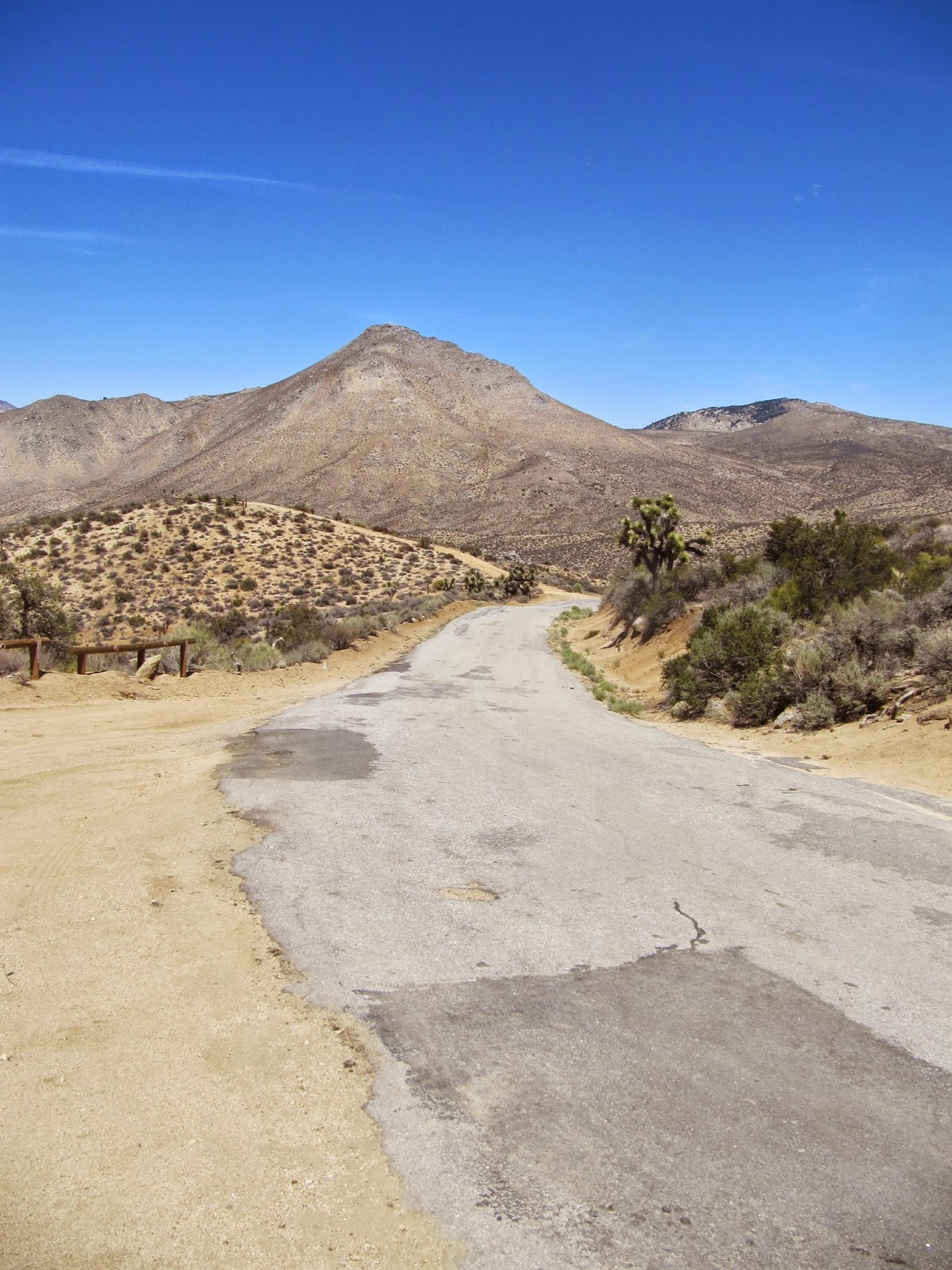 This is the road that runs through the desert country which trail angel Mary uses to resupply the water caches. 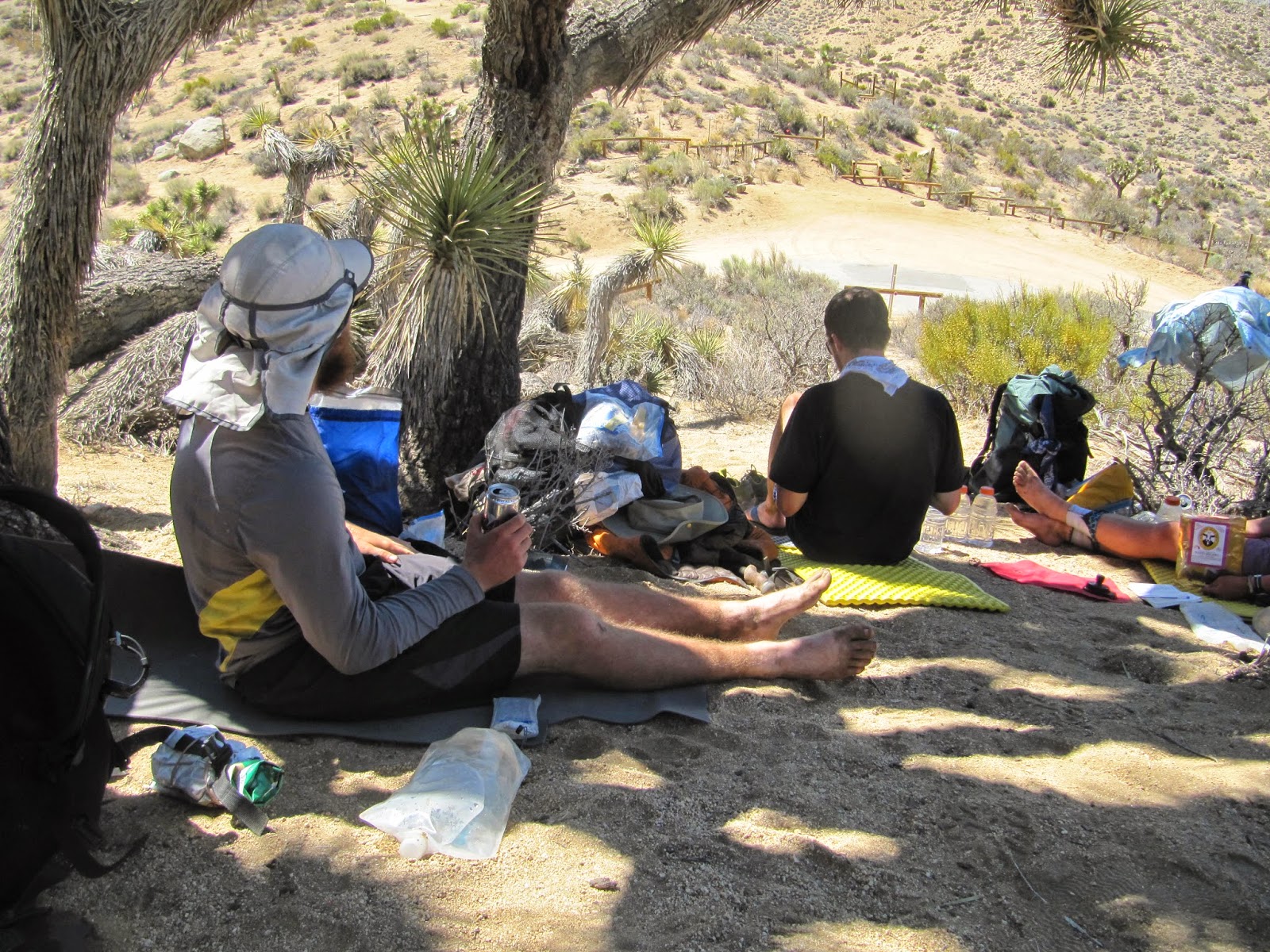 Across the road from the 1st water cache is a large Joshua tree that offered substantial shade. Several of us waiting here for the heat of the day to pass. 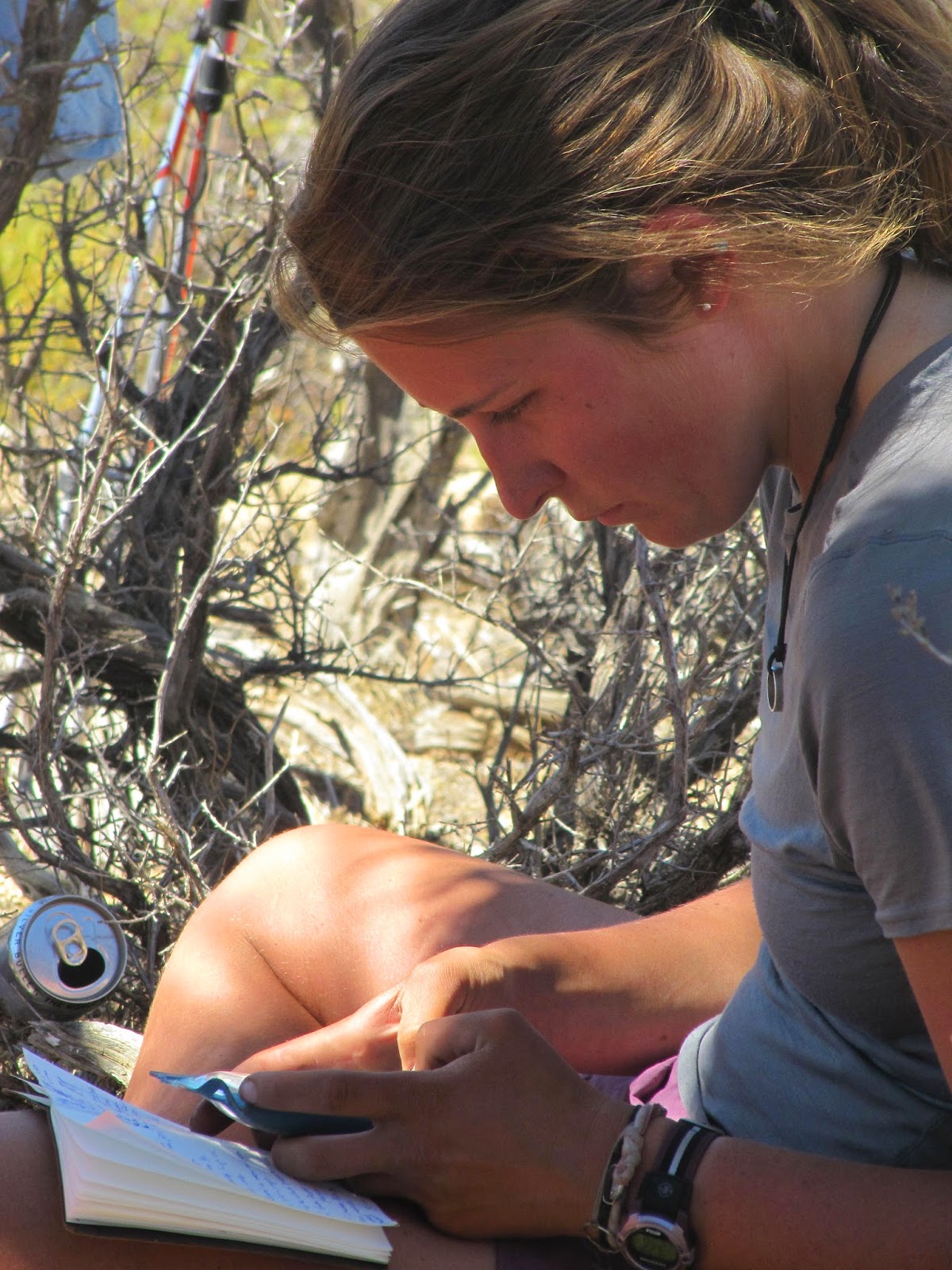 Faucet enjoying some down time in the shade of the Joshua tree. 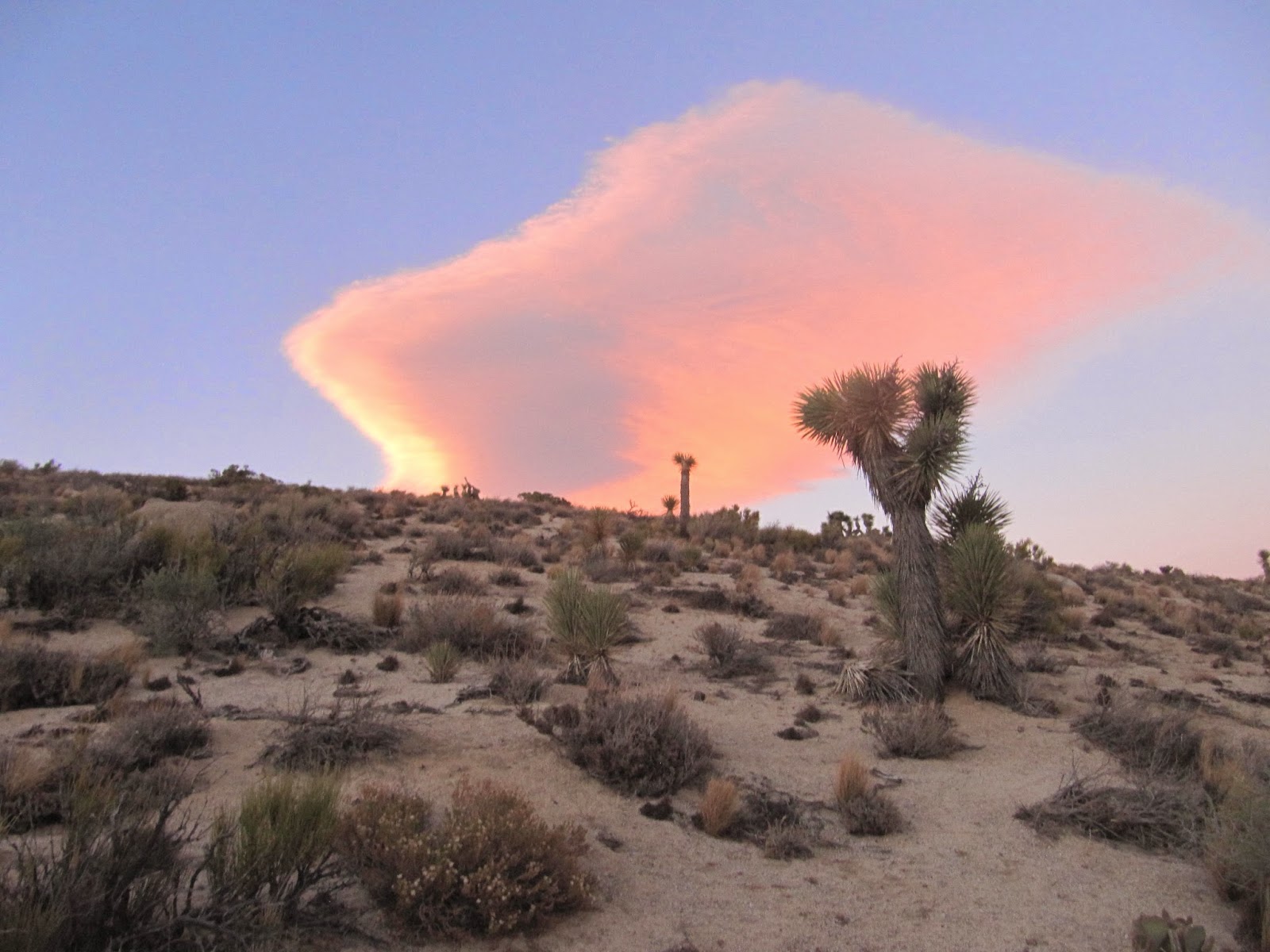 This was my view from my campsite this evening. 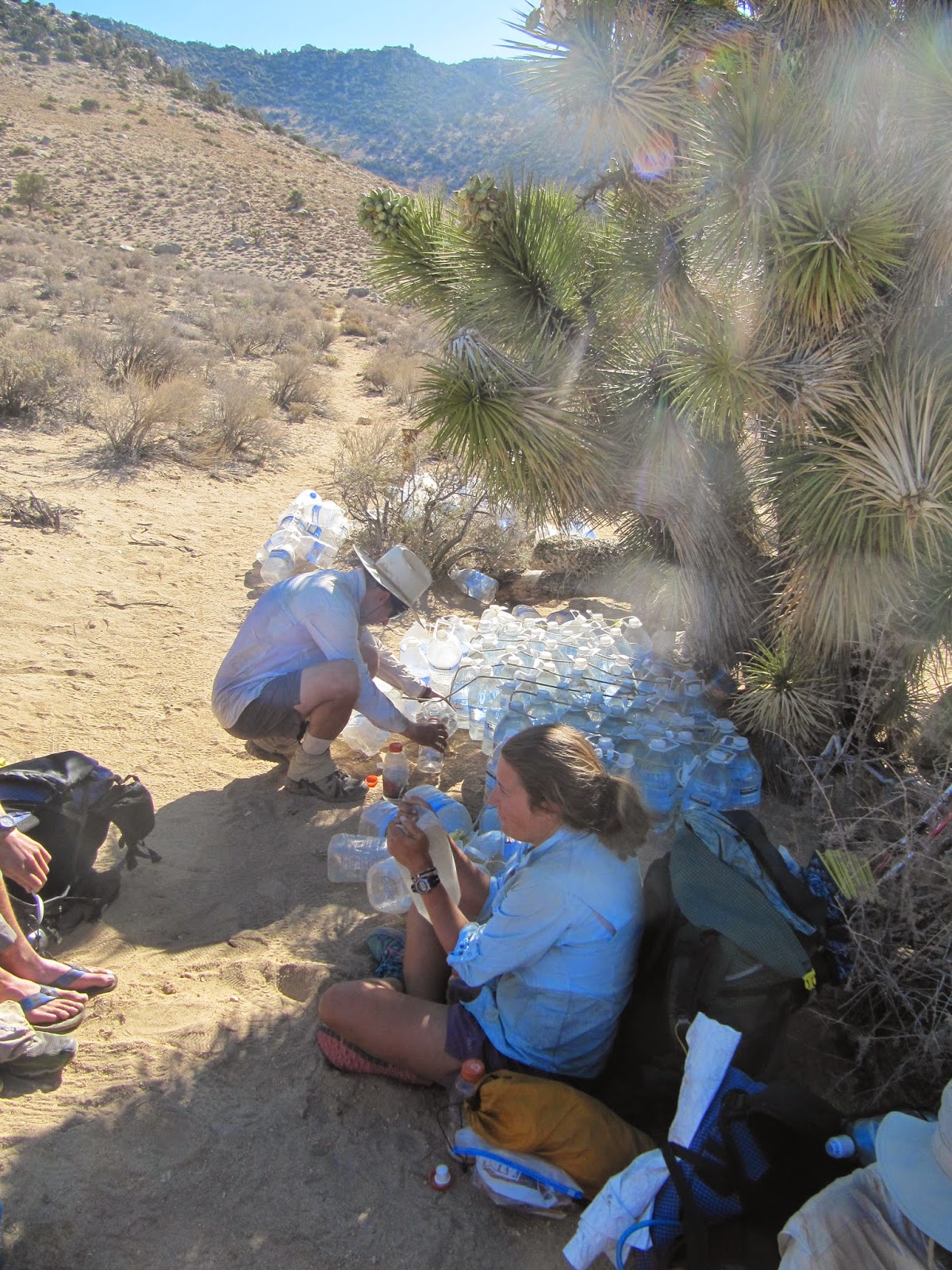 Filling up at the 2nd water cache maintained my trail angel Mary. 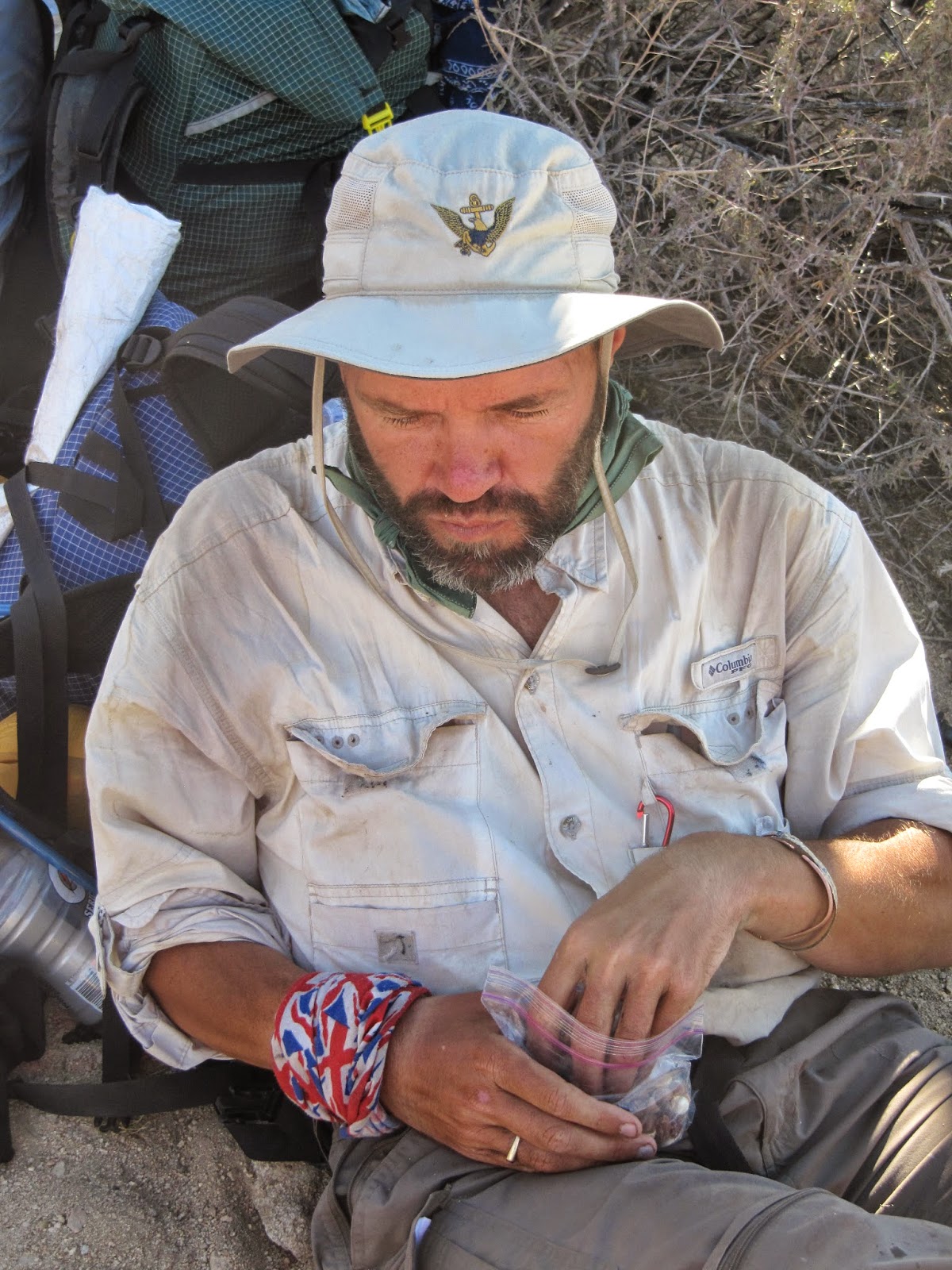 British national Walkie Talkie resting at the water cache. Many months from now, he would become famous for his standoff with a mountain lion, and his iconic utterance, "When the mountain lion jumps down, the pants fill up." 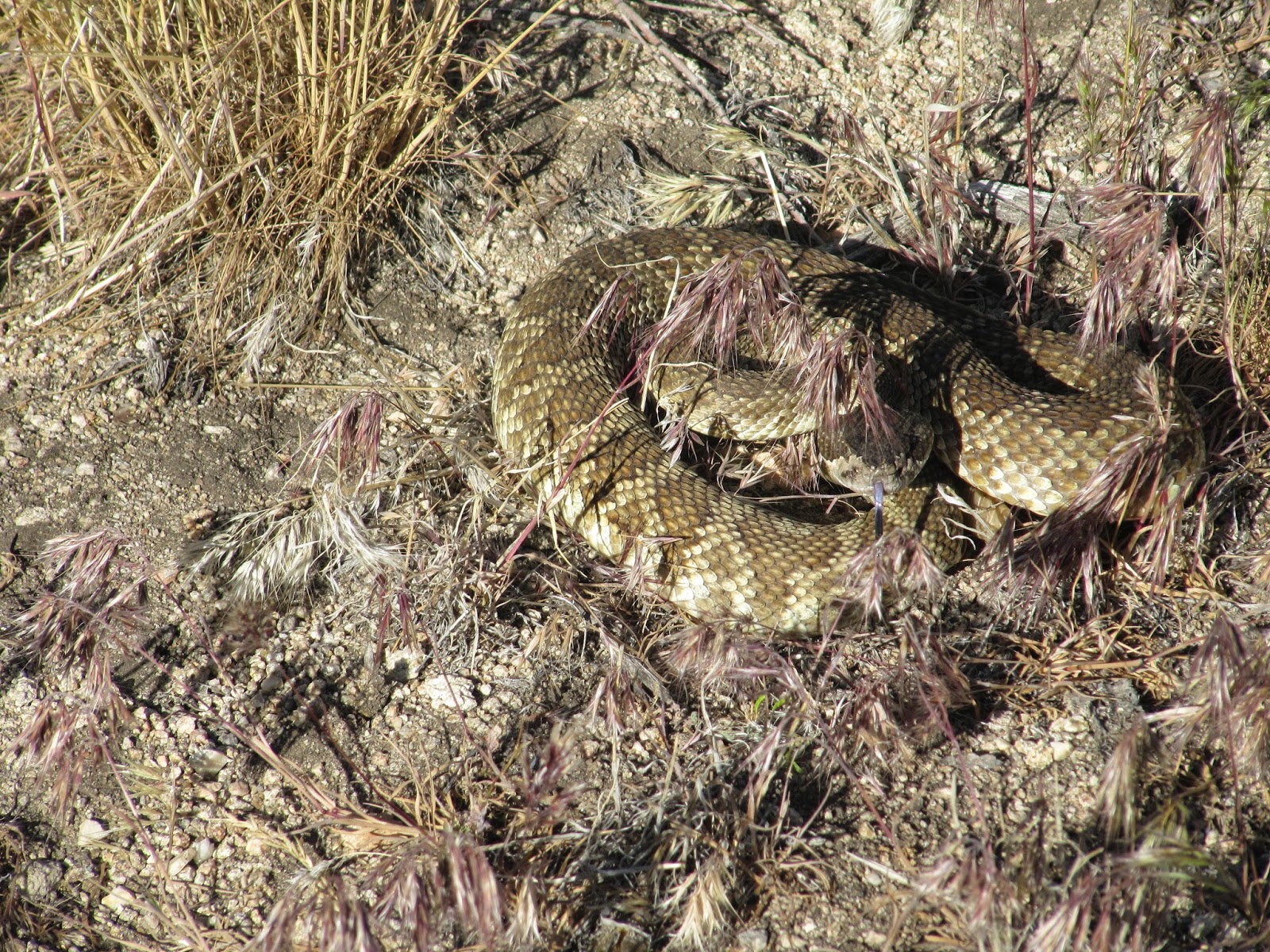 Another desert dweller who didn't want to yield its territory on the trail. It needed a little persuasion. 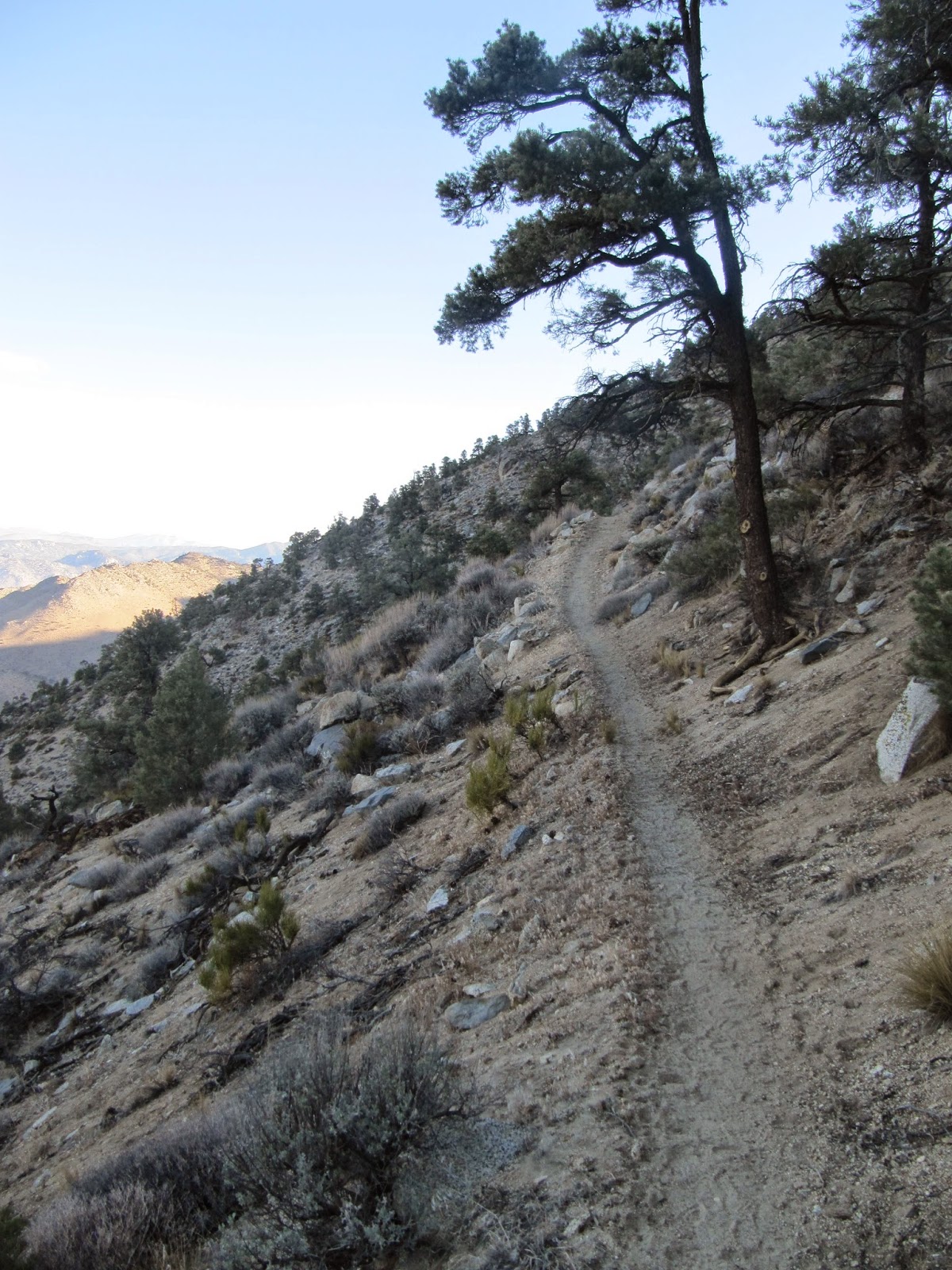 It seems that the trail always goes up, never down. 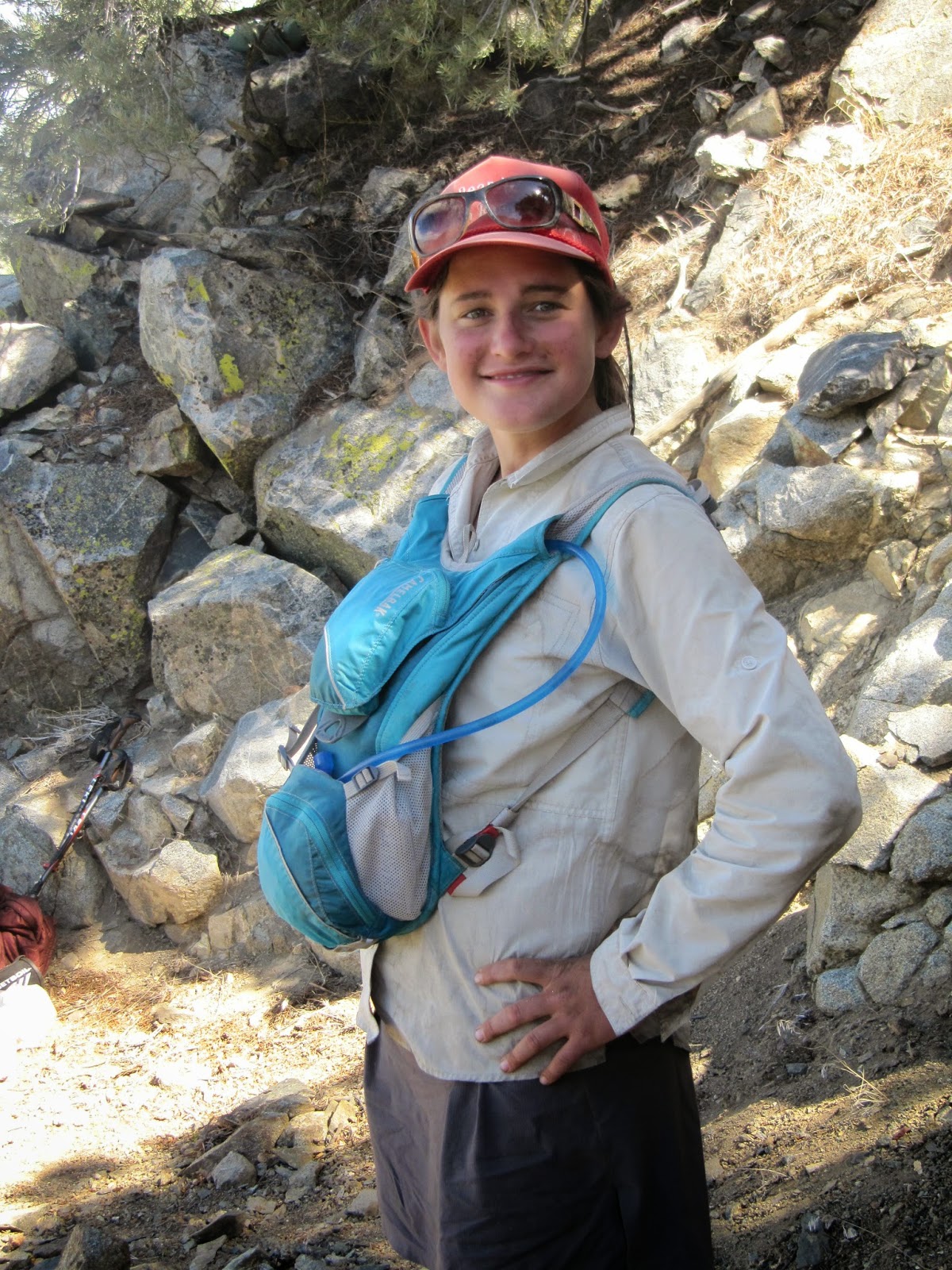 Dingo modeling her new CamelBak. She and her companion Mudd both had these Camelbaks that they carried on their chests. They were quite practical as it allowed them to carry 2-3 extra liters of water without adding weight to their packs. Additionally, they had storage space for items a hiker always needed immediate access to - sunglasses, regular glasses, notebook and pen, maps, camera, iPod, and treats. I liked the idea so well that I had my wife ship me a three liter pack that I wore for the balance of the trip.