I was on the move early this morning; the red lights atop the turbine towers were still blinking brightly as I stepped back onto the trail.  Within a few miles, I arrived at Cottonwood Creek and spotted the water cache.  It consisted of a heavy-duty, industrial-strength plastic container inside a metal wire cage with a simple on/off spigot protruding from one side.  Its capacity was about 250 gallons.  This water cache, like the previous one at the bottom of the trail coming out of the Angeles National Forest, was maintained by the caretaker at Hiker Town, who I only know as Bob.  Scattered around the water cache were several tents of sleeping hikers, probably the same ones I saw passing me in the dark last night.  I was quiet as I refilled my water containers; I didn’t want to disturb my sleeping compatriots.

Now the trail left the desert floor and began a steady climb up into the foothills of the Tehachapi Mountains.  The trail was monotonous as it contoured around the shadeless slopes of the hills, dropping down into steep ravines, only to climb up the other side, then repeating this maneuver over and over again.  In places the trail has been ravaged by dirt bikes, leaving behind deep ruts that obscured the tread.  Eventually, the trail made another long descent, this time into Tylerhorse Canyon that contained a small-flowing stream.

At the bottom of the canyon, I found a hiker enjoying lunch and a smoke who identified himself as Phil.  He pointed to a spot along the stream where I could easily fill up my water containers.  I didn’t need much, but I never passed up a water source.  While I was filling my containers, Happy Feet showed up.  Phil left, and Happy Feet and I decided this was a good place to have lunch.

These barren hills with their steep grades and never-ending switchbacks were hard for me.  I make it; I always do, but it takes a measure of enjoyment out of the whole trail experience.  My body doesn’t naturally glide up the inclines with graceful movements of the legs and arms; I have to push the body, entice the body, promise the body treats if he’ll just go to the next bend in the trail, and always I was counting steps in units of eight, sixteen, twenty-four, etc.  It was a never-ending struggle to walk up every incline, every grade, and every switchback.

I sensed I was missing something in my constant quest to make my miles every day, be it seventeen or twenty-five miles.  I was always pushing, trying to eke one more mile before settling in for the night.  I don’t think walking the trail was meant to be this tortuous, but it was what it was, and I was committed, so I pushed on.

The desert town of Mojave was my next resupply.  Distance wise, it was too far to reach by this evening, so my plan was to walk to the road crossing at the Tehachapi Willow Springs Road that lead to Mojave and camp for the night in the trees alongside Oak Creek.

About ten miles from the road crossing, the trail began to parallel Oak Creek and Oak Creek Road.  The dark green foliage of the creek presented a stark contrast to the sparse, sunburned vegetation that lay scattered on the rolling hills, and the closer the trail came to the creek, the greater was the urge to abandon the trail and head for the water and greenery of the creek.

The wind turbines were close; in fact, the trail wound in, around, and through them, and it was all too clear why they were concentrated in this part of the Mojave Desert – the wind blew constantly.  It blew so hard that it lifted me off my feet; gusts were easily forty to fifty miles per hour.  Nearing the campsites in the trees alongside Oak Creek, I raced down the hill in an effort to get out of the wind as quickly as possible.  With each step, I was literally flying through the air, covering ten to fifteen feet with each stride.

I couldn’t run fast enough, as the wind made for a horrible hiking experience.  At last I made it to the campsite; it was not large and the sites that were available were already taken by other hikers.  As I kept walking along the creek, I found a small, flat place amongst the sand and bushes, that with a little help from my shoe that acts like a bulldozer, I was able to construct a decent camping site for the night.  And it was actually quite nice, as I was sheltered from the wind that blew constantly through the night. 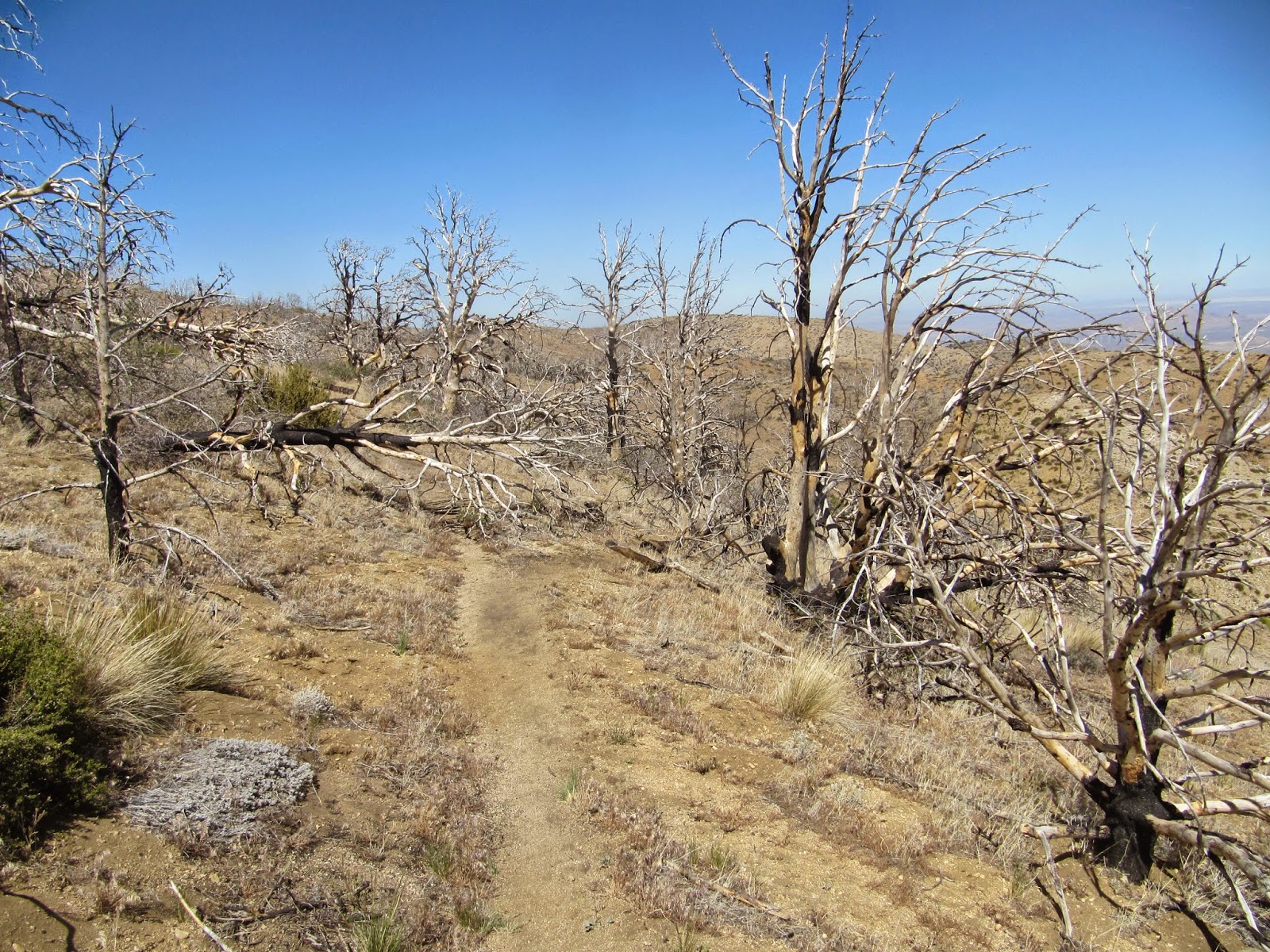 Everywhere, there were the remains of fires that had whipped through the underbrush, destroying everything in its path. 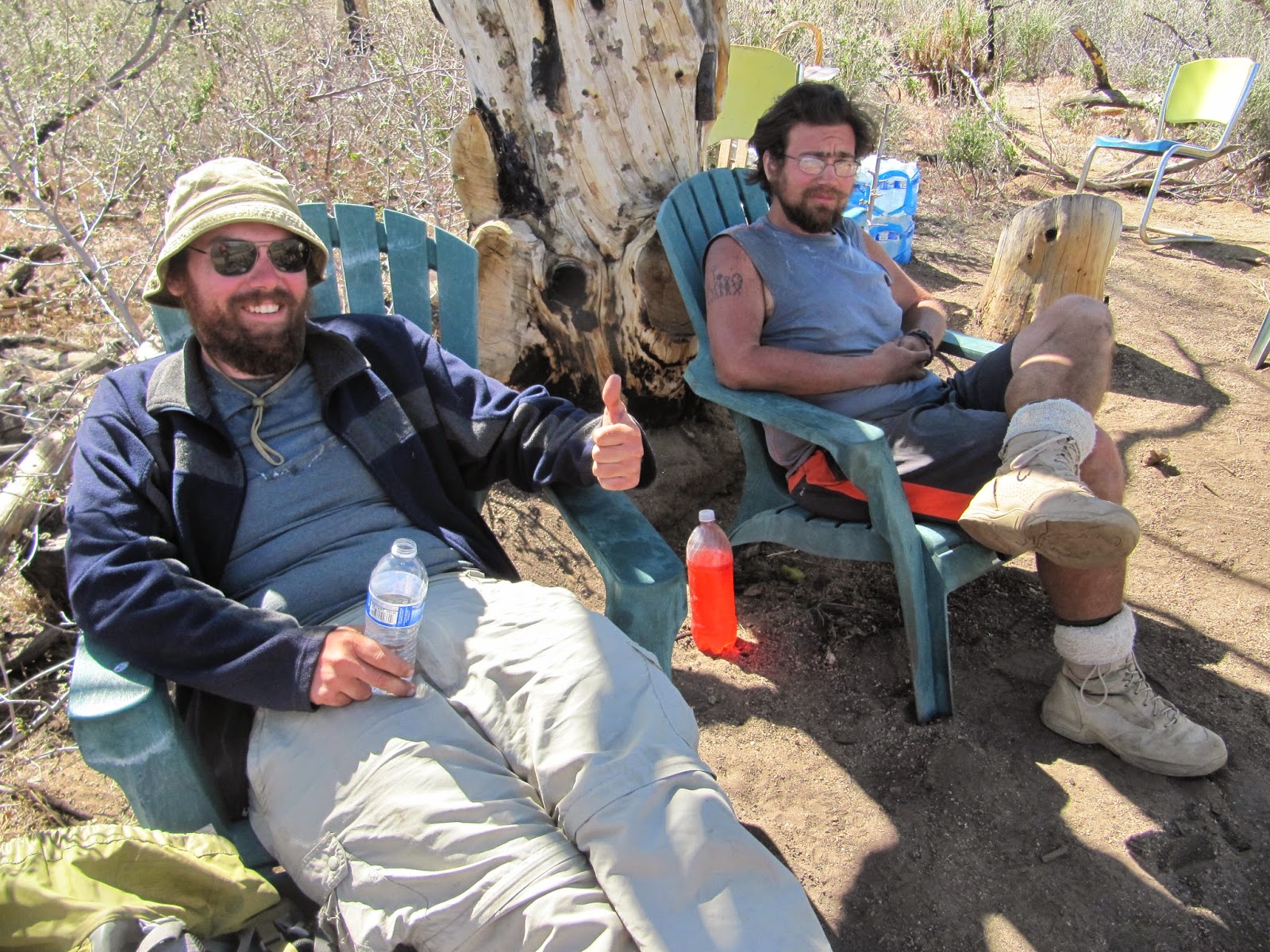 Another rest stop provided by a kind and thoughtful trail angel. 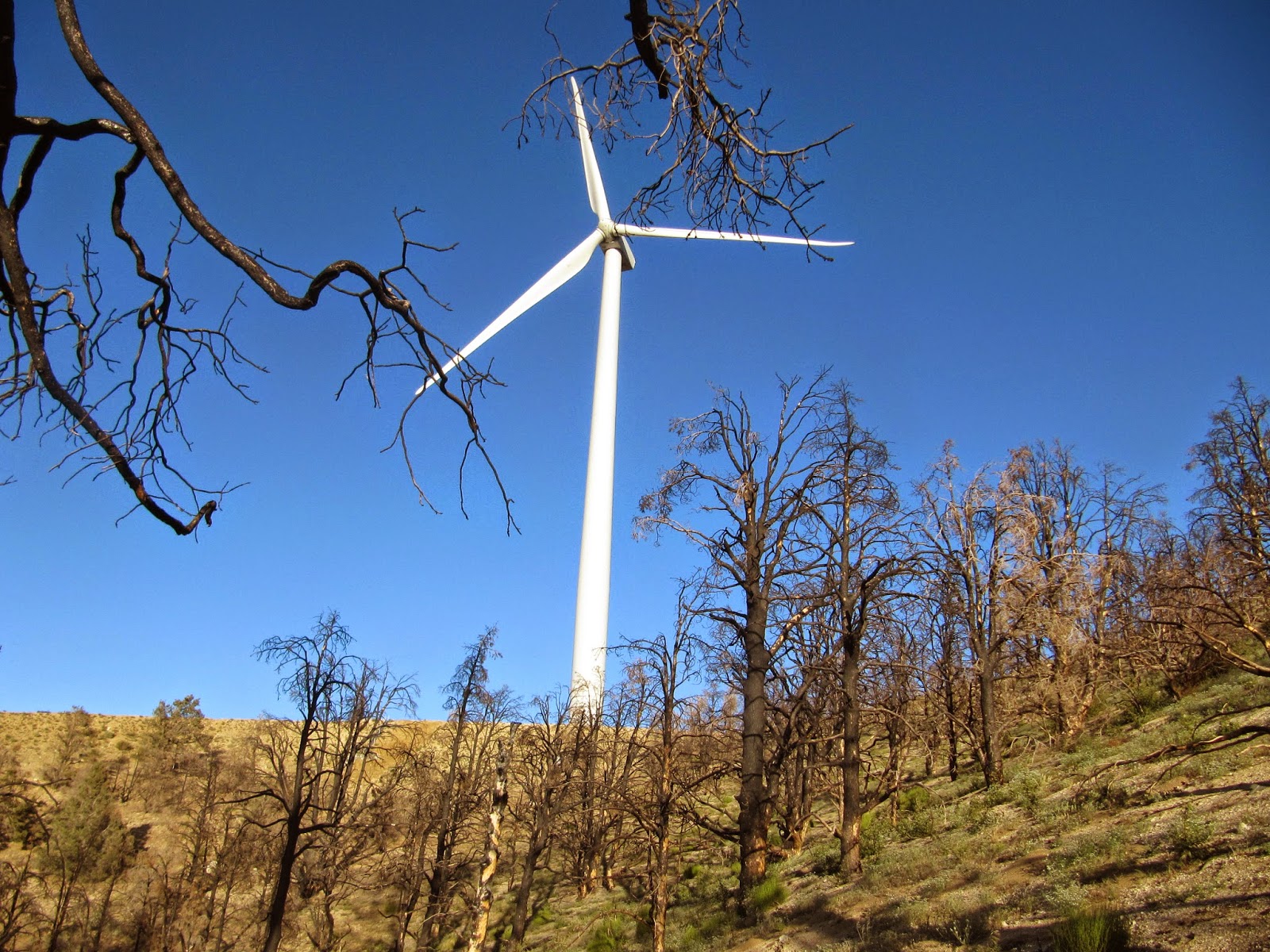 A majestic wind turbine, if they can be termed majestic. 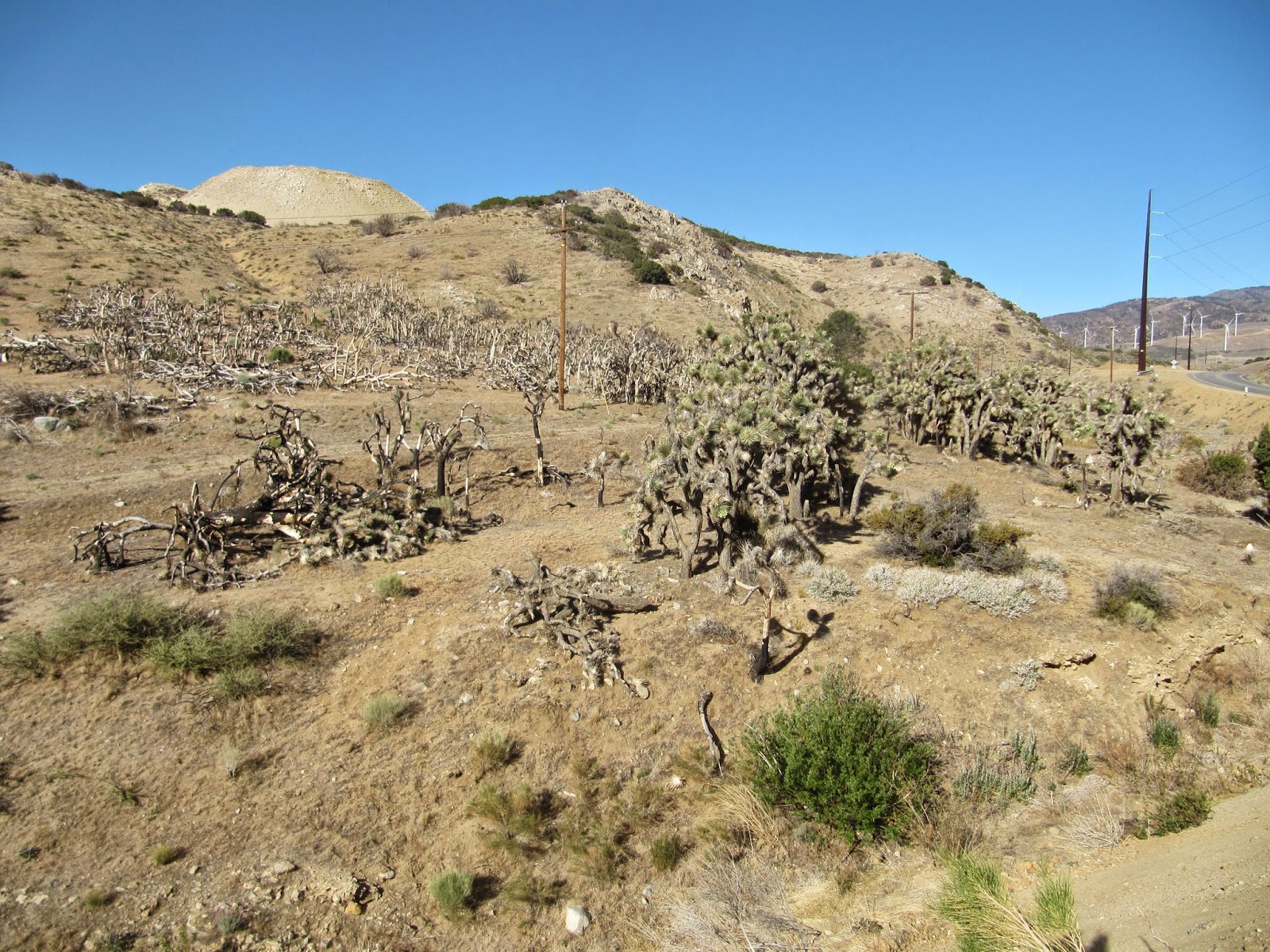 The terrain of the Mojave Desert.