Eventually, the trail left the buried Los Angeles Aqueduct as it meandered around a low-lying hill, and took a more direct route across the desert towards a turbine wind farm.  The wind farm was massive; hundreds of turbines dotted the desert floor.  Over the years, the structure of the towers, the engine houses, and the blades themselves have evolved, from smallish Erector set-type towers with small engine houses that sit atop the towers, to slender metal tube towers, topped with gigantic engine houses, from which protruded the three prop blades of the turbine itself.

Night was coming on, and as darkness increased, the flashing red lights atop the turbines began to come on, most likely activated by photosensitive light cells.  In the distance, as darkness obscured the towers, all that could be seen were hundreds of red lights blinking against the backdrop of a blackened sky.

As the evening was warm and the trail easy to follow, as it was now aligned with dirt roads that traversed this section of the desert, I determined to walk as long as it was possible to see the road without getting into my pack and pulling out my headlamp.  There were many dirt roads and dirt bike trails in this section of the desert, as well as private homes.  Although the houses were relatively far apart, there still seemed to be activity around the buildings, notably cars and trucks and people walking about.

Just as some people liked their cabins in the mountains, others preferred their cabins in the desert, especially if it allowed them to ride their dirt bikes.  All through the evening, I could hear the whine of motocross bike engines tearing through the sand and dirt in the surrounding hills, and occasionally the riders would pop into view as they crested a hill or mound off to my side.

In the dim twilight of the evening, with only the glow of the blinking red lights to illuminate the desert, in the distance just off to the side of the road, I spotted something white sitting beside a patch of scraggly chaparral.  Drawing near it, and upon closer inspection, I discovered trail magic in the form of a Styrofoam cooler, with a note on top that read,

“For PCT hikers, courtesy of the Mojave Trail, Bike, and Homeowners' Association.”

Apparently it had just been filled, for the sodas and Gatorade were ice cold.  I was so delighted to see this bit of charity, so grateful for the thoughtfulness and kindness of the trail angels who placed this cooler here for the enjoyment of the thirsty hikers passing through.

The Gatorades were small; I drank one immediately and took another one for the road.  Of all the interaction I had with trail angels and trail magic during the five months' journey on the trail, this little Styrofoam cooler with the ice cold refreshments was probably my favorite.  It meant so much to me finding it here, so strategically placed in the middle of the Mojave Desert.

At 9:00 p.m. I quit for the day, although I could have and would have gone much farther, but my maps indicated there was a water cache in a few miles, and with the numerous dirt roads crisscrossing back and forth on the desert floor, I was a little concerned about taking a wrong turn in the dark.  With the flat desert, there was no problem finding a decent camping place for the night.

As I lay on my pad and sleeping bag, savoring the warmth of the desert air, in the sky overhead, I saw my old friend the Big Dipper.  He had been my friend on the ocean voyage and guided my way for five months.  On those evenings, when the nighttime sky was clear and I chose to row after dark, I learned early on that if I kept the Big Dipper over my left shoulder, I was always heading in a westerly direction.

To maintain this direction, I had only to set my rudder at the precise angle to keep moving westward and then lock down the rudder tight.  If I didn’t lock it tight, the wind would turn the boat and push it in a southerly direction.  Before drifting off to sleep, I caught glimpses of other hikers passing by who were also taking advantage of the coolness of the night for making miles. 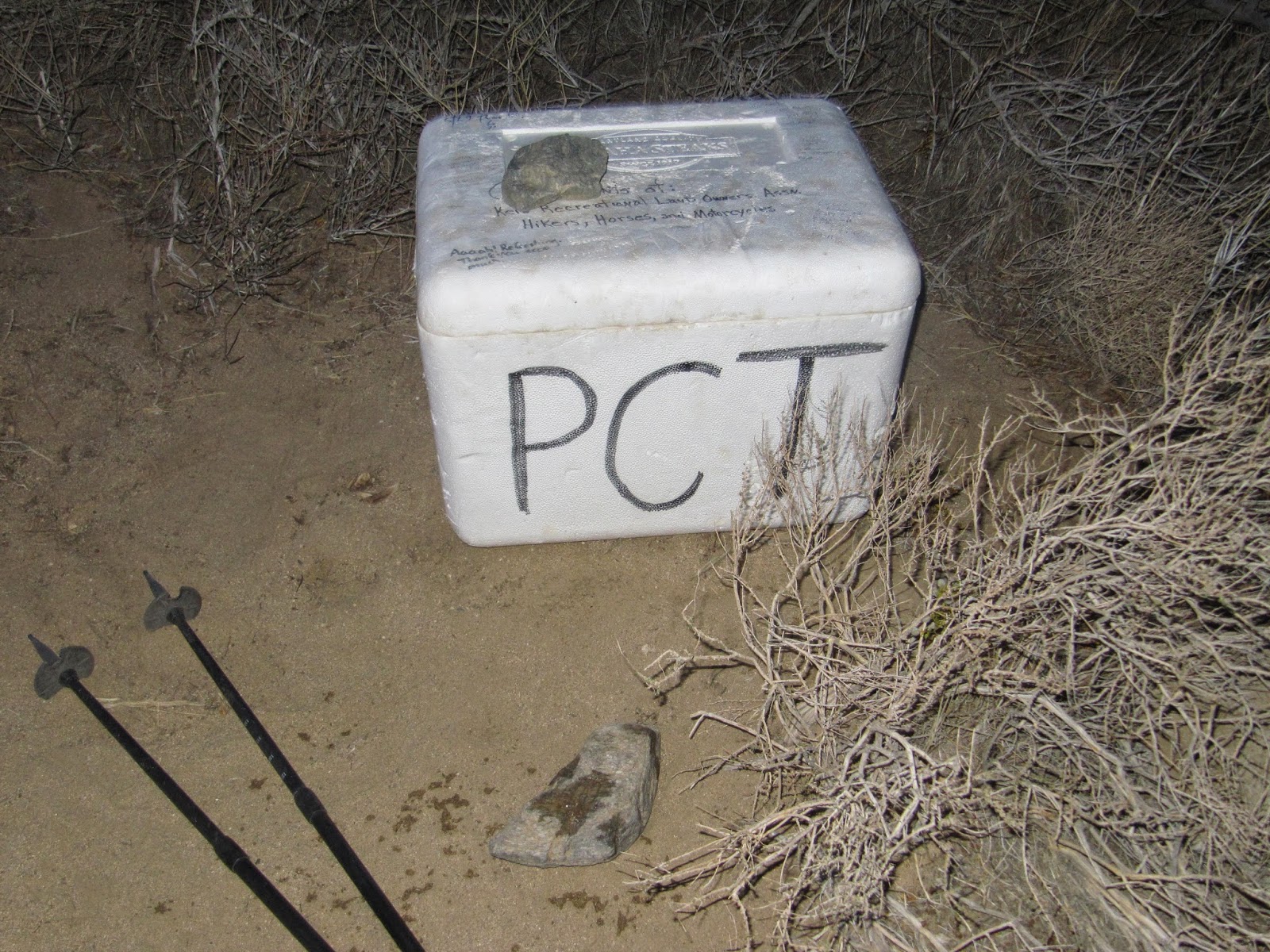 This was the most delightful find of the day's journey. An ice chest full of ice cold drinks. 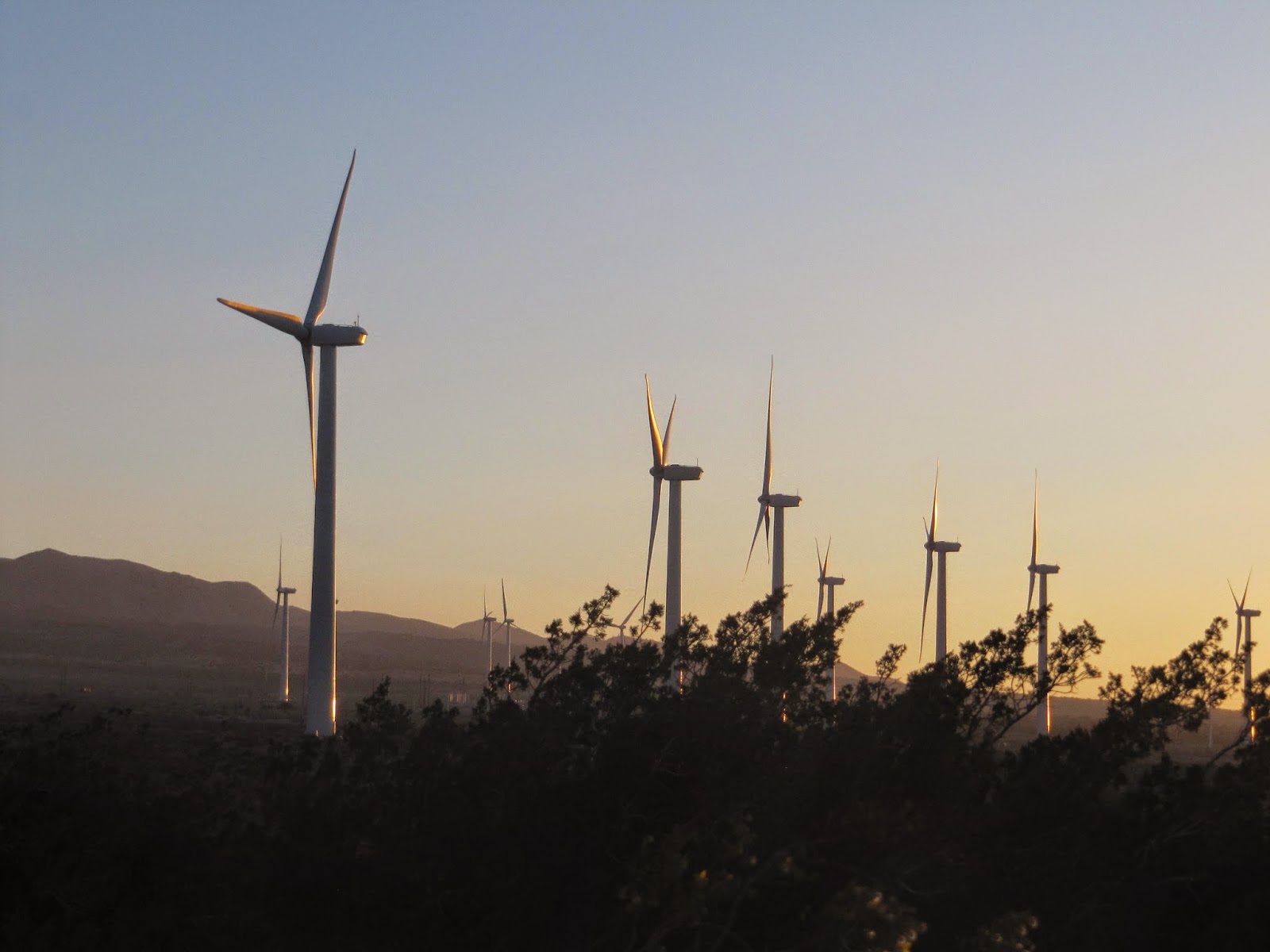 The Mojave Desert  is home to thousands of wind turbines. As the light begins to fade, photo activated, blinking red lights begin to appear on each tower. 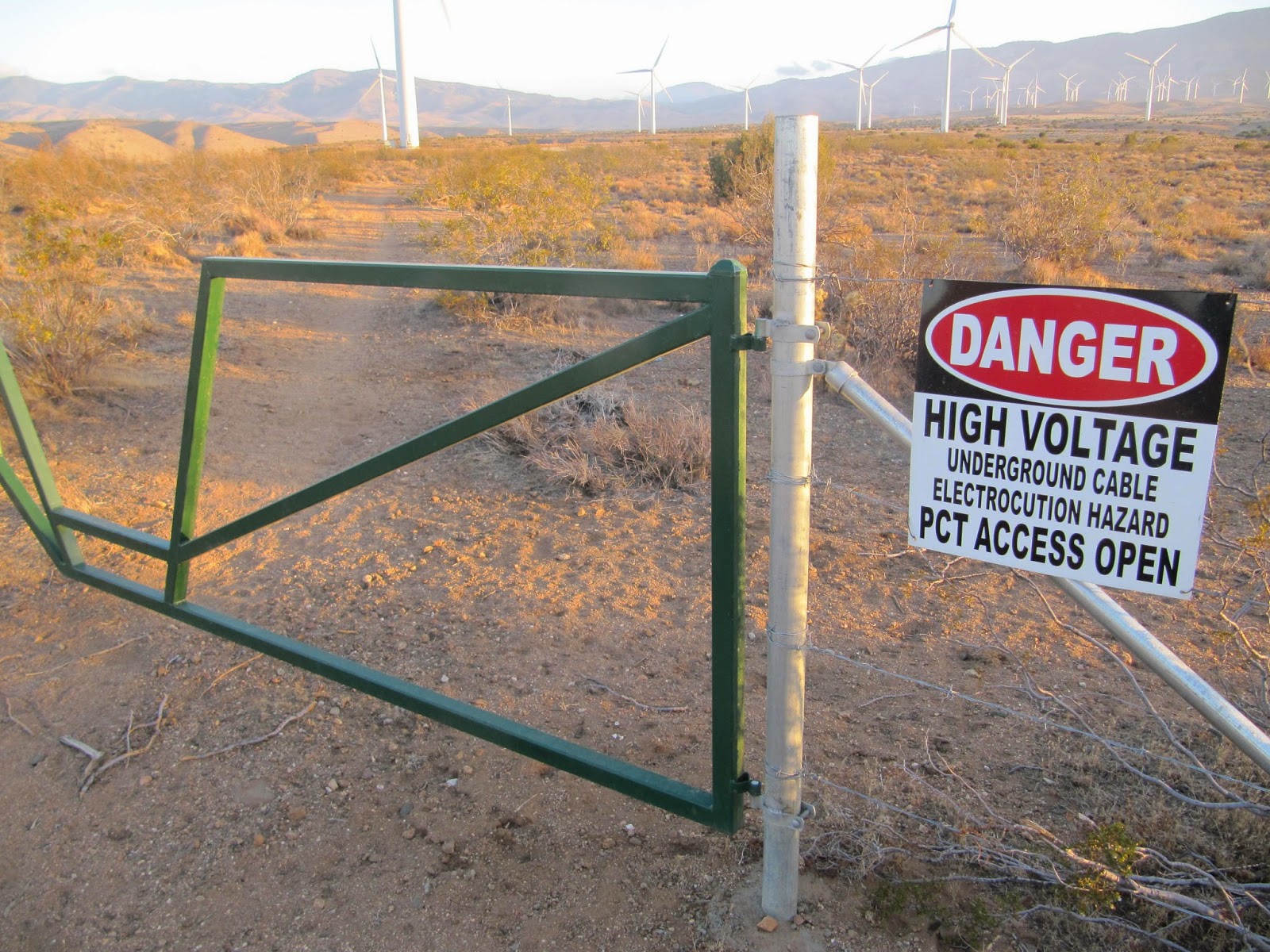 It may be dangerous, but it's OK for PCT hikers to enter the area. 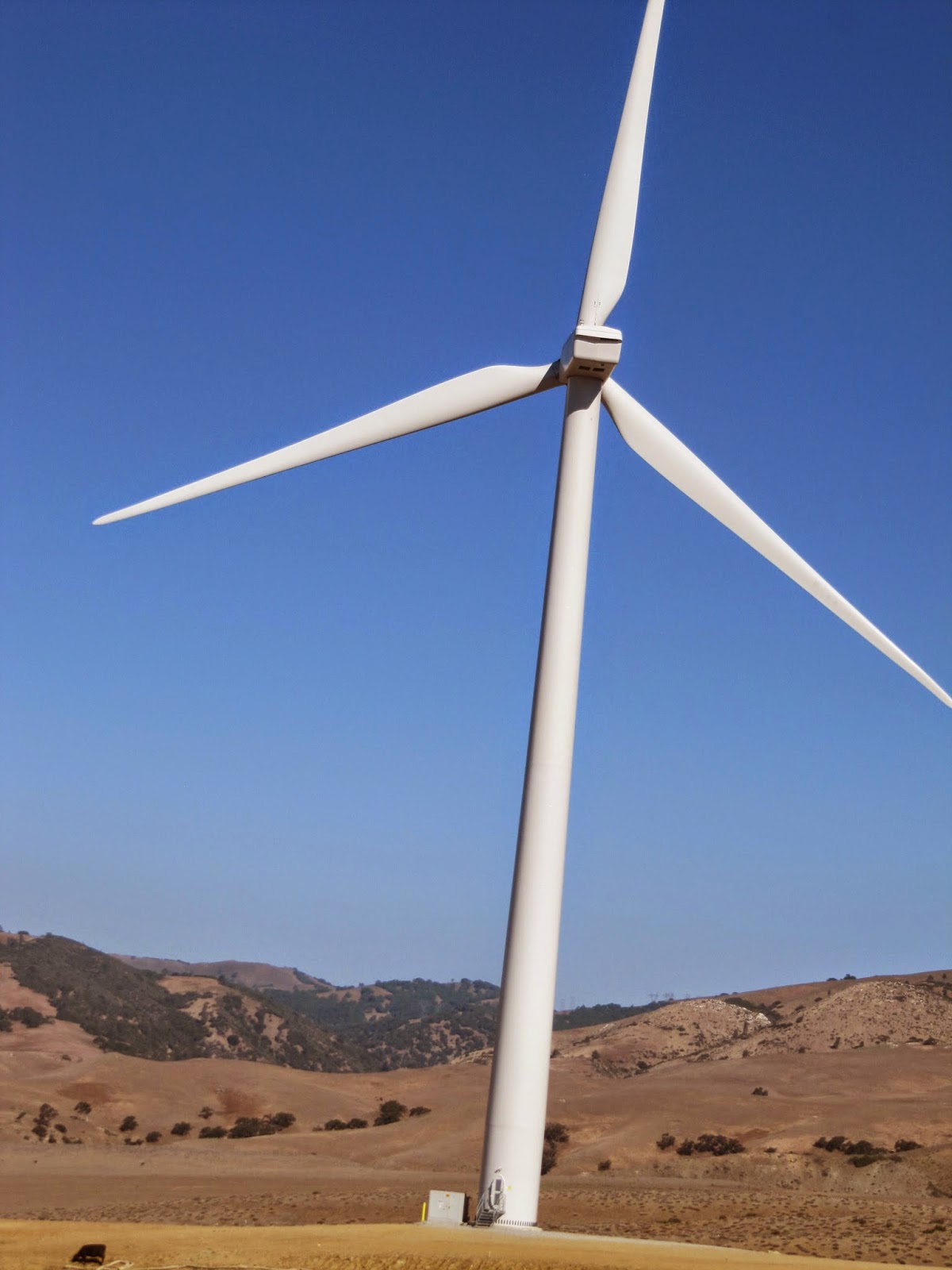 One of the largest wind turbines on the desert floor. 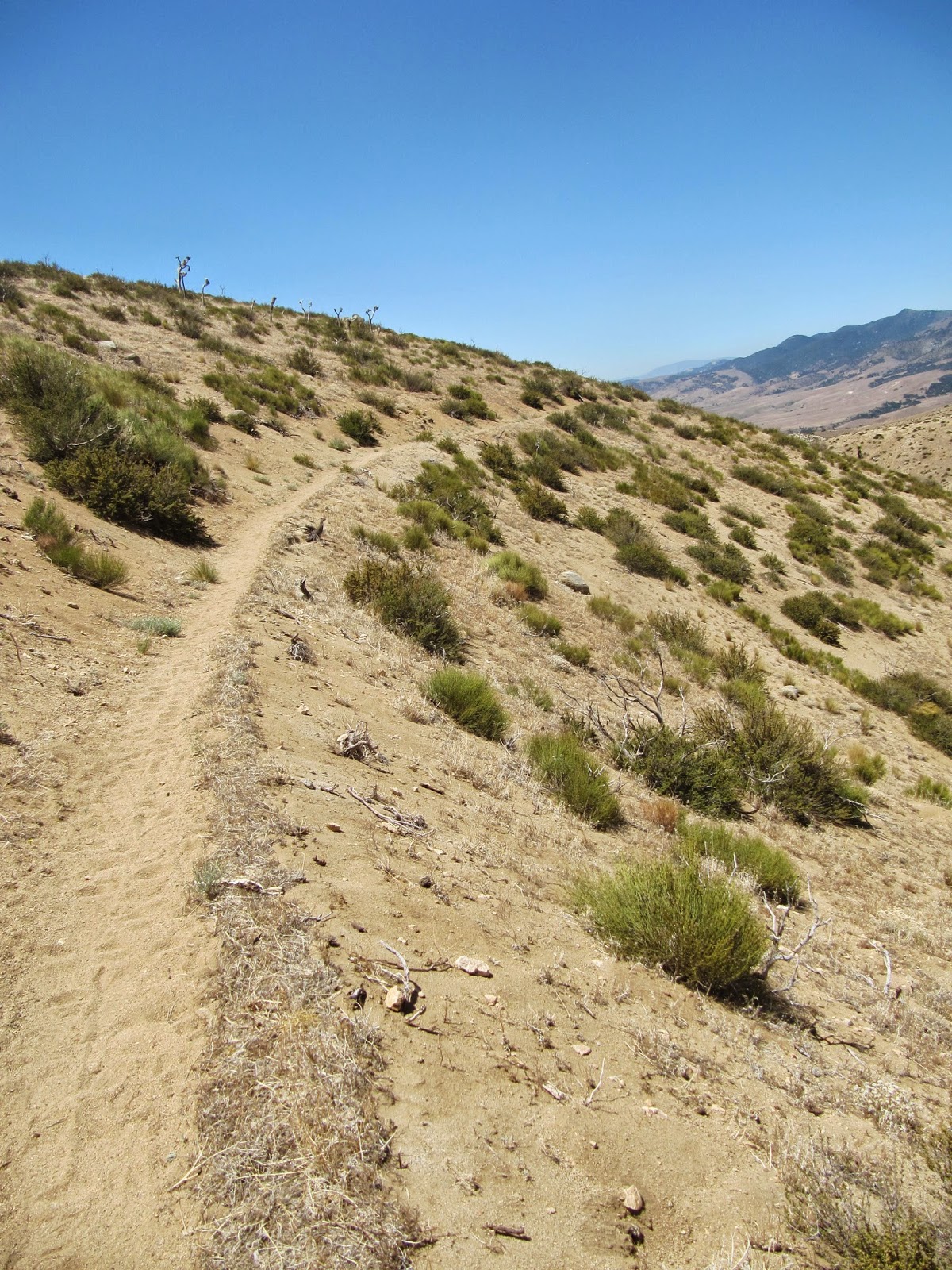 And the dusty, dirt trail continues north towards the Sierra Mountains, now only about 100 miles away.