Over the next four miles, the trail would climb close to twenty-five hundred feet, which was a lot of uphill climbing, and all of it would be in the environs of the persistent winds rushing down Tehachapi Pass – pronounced tee-hatch-a-pee.

These winds, which could sometimes gust up to 80 miles per hour, were formed by the movement of air flowing up the western side of Tehachapi Pass, moving over the pass, and then rushing helter-skelter to fill the void left by the warm, rising air of the Mojave Desert.  Two miles after leaving our lunch spot alongside Highway 58, the trail commenced a seventeen-hundred-foot climb eased somewhat by twenty-one switchbacks.

Along the ridgetops on the eastern side of the Tehachapi Mountains, where the trail was constructed, I encounter additional wind farms, all placed strategically to take advantage of the ever-present winds.  The wind farms showed a mixture of tower construction; some were the older models which used an open metal lattice framework to support the engine house and rotors, while others displayed a more modern touch with their sleek, slender metal tubes reaching up into the sky.

Linking the ridges together was a network of dirt roads that allowed service personnel to provide maintenance to the turbines.  The trail passed over, around, and through this patchwork of roads and towers, and on occasion followed a knife-edge ridge exposed to heavy rushing winds that could easily blow you off the trail and send you flailing head over heels down steep slopes.  These exposed ridges lasted for several miles, and hikers who later commented on the harshness of this section, had choice four-letter words for the builders of the trail who routed it to this location.

By seven that evening, storm clouds had once again moved up the slopes of the mountain with their moisture-laden payload in the form of heavy mist, so I deemed it prudent to erect my tent for the night.

By four o’clock the next morning., I was awake and ready to pack up.  By the light of my headlamp, I disassembled my tent, loaded my backpack, and stepped out onto the trail.  I needed water and the next source was Golden Oaks Springs, located at mile 583.  The trail passed in and out of juniper trees and scrub oak and occasional burn areas from past forest fires.  By noon, I had arrived at the springs and found a number of other hikers lounging around.  Most had already filled their water containers and were preparing lunch, while others like Tour Guide were just beginning to filter their water and fill their containers.

While I waited my turn at the water spigot, I prepared my lunch and took note of the way my fellow traveling companions treated their water. I observed a variety of methods to filter or treat the water.  Many use Aquamira, a two-part concoction, that once mixed is added to each water container; others use the Sawyer Squeeze bottle filter, and still others use the SteriPEN.  As for myself, I just add two drops of household bleach per liter and call it good.

I’m not particularly fussy about my water and feeling the need to treat every liter I drink.  My rule of thumb is to look at the source of the water to determine whether or not I treat it.  If it’s a spring that has been fenced to keep cattle away from it, then yes, I’ll treat it, but if the water is coming directly out of the ground, or from a hillside, then probably not.

This spring was developed by the Forest Service back in 1994.  They fenced the spring to keep cattle from contaminating the source, and then piped it to a rectangular cement trough that still allowed cattle to drink.  It was also a vital water supply for wild animals that inhabited the area – bears, cougars, deer, sheep, etc.

The next water source was Robin Bird Spring, nineteen miles distance, and I arrived there the next morning.  The spring was a short way off the trail; as I made my way along the footpath, I passed a slumbering hiker stretched out full length in his sleeping bag in the soft grass, a short distance from the spring.  He had no idea his space was being invaded.  This spring, like the last one, was also developed by the Forest Service in 1994, and it too was fenced to keep the cattle away and then piped a short distance to provide access to thru-hikers. 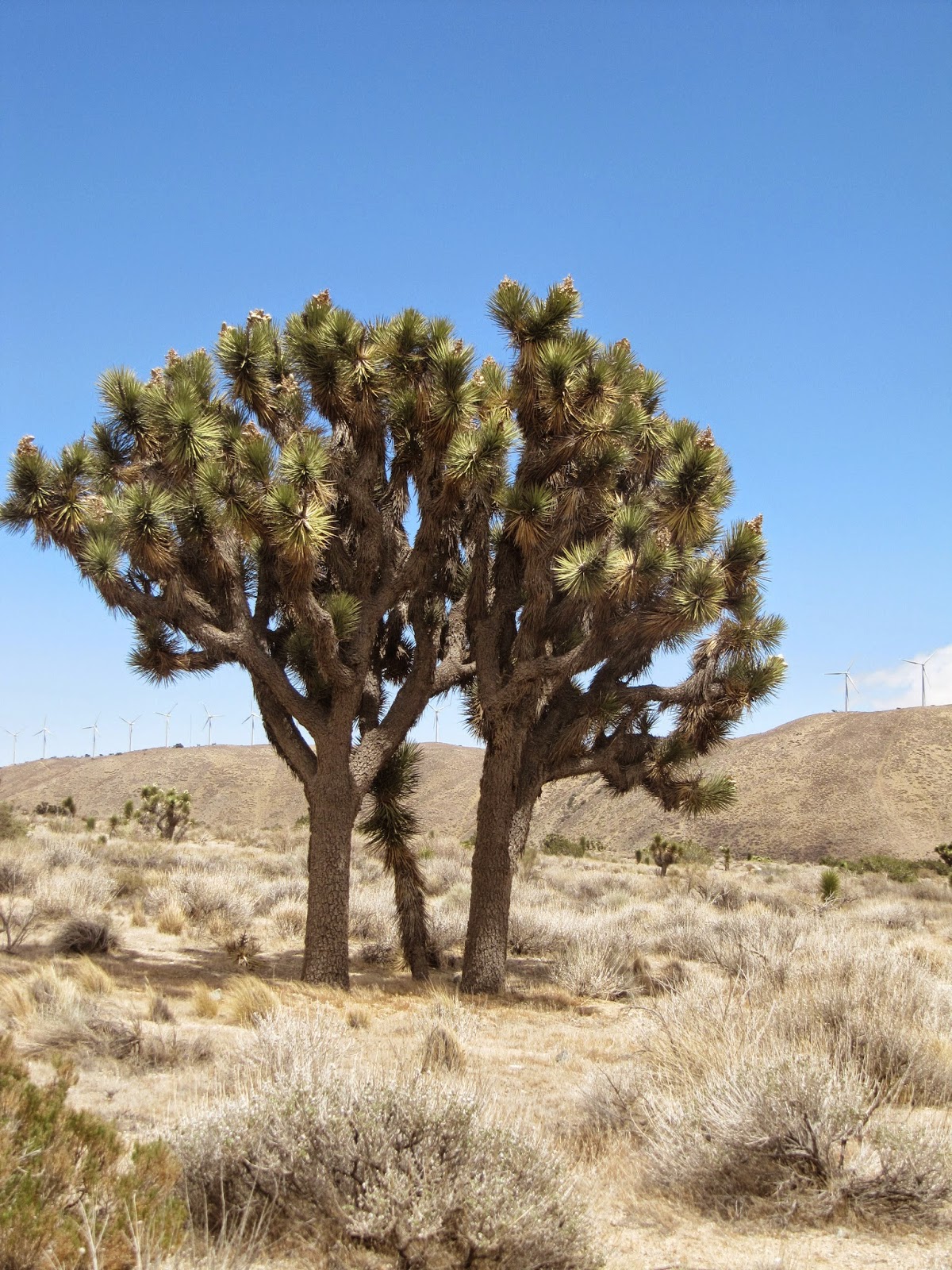 A lonely Joshua tree on the Mojave Desert. When the temperatures are moderate, it's quite pleasant to hike in the desert. 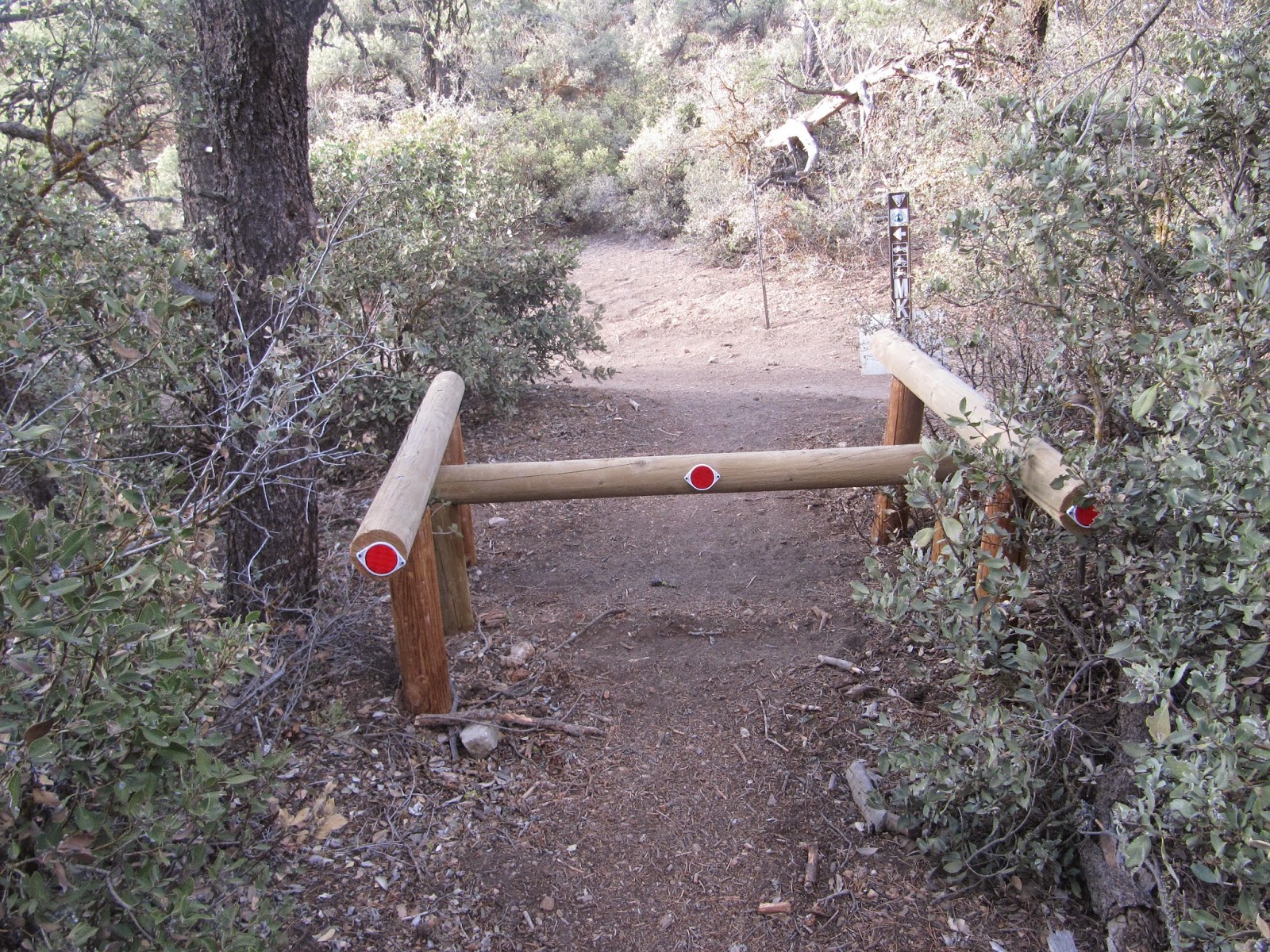 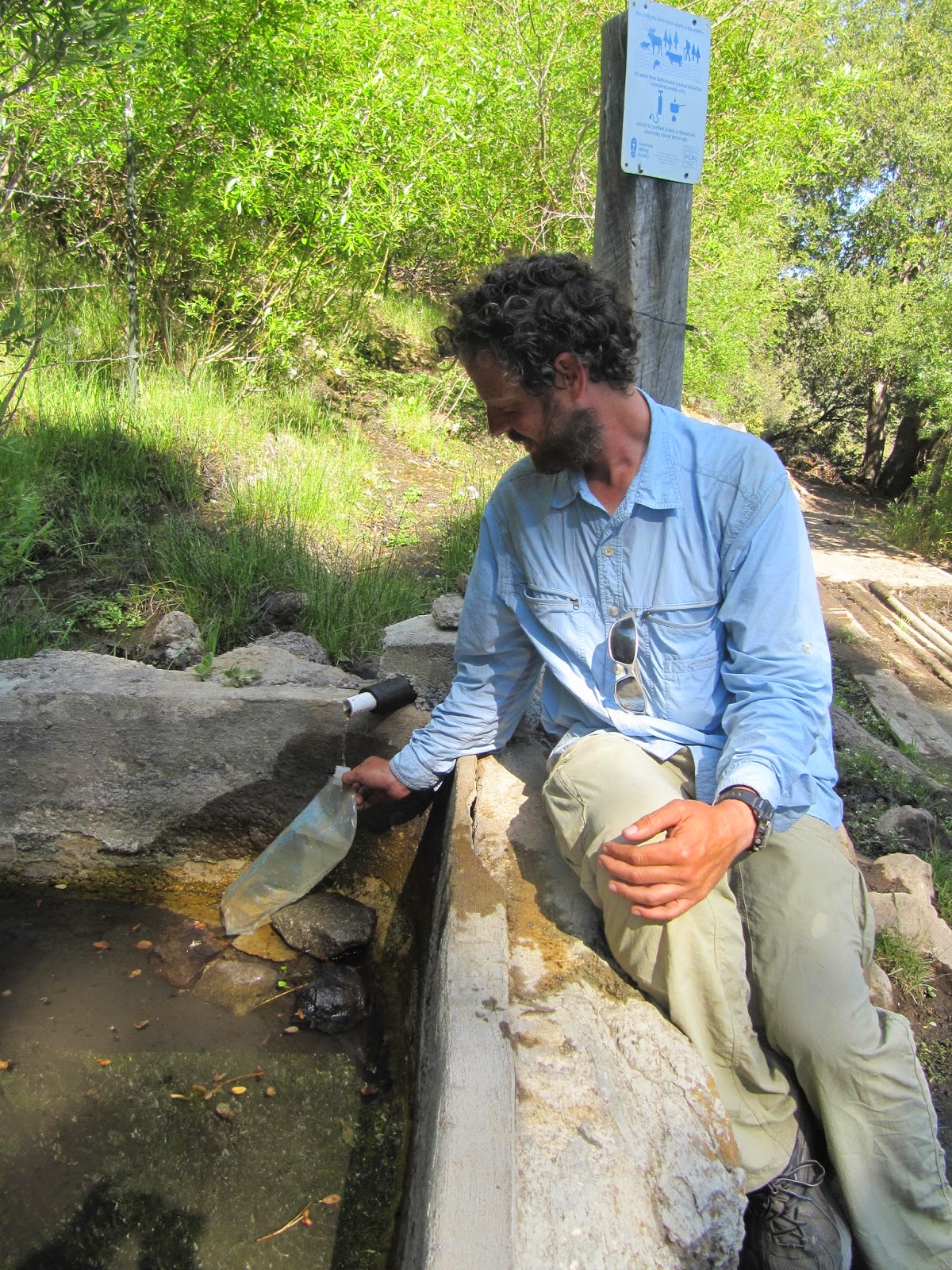 Tour Guide filling his water bottle at the Golden Oaks Spring. This is an important water source for all wild life in the area. The actual source has been fenced to keep cows from contaminating the water. 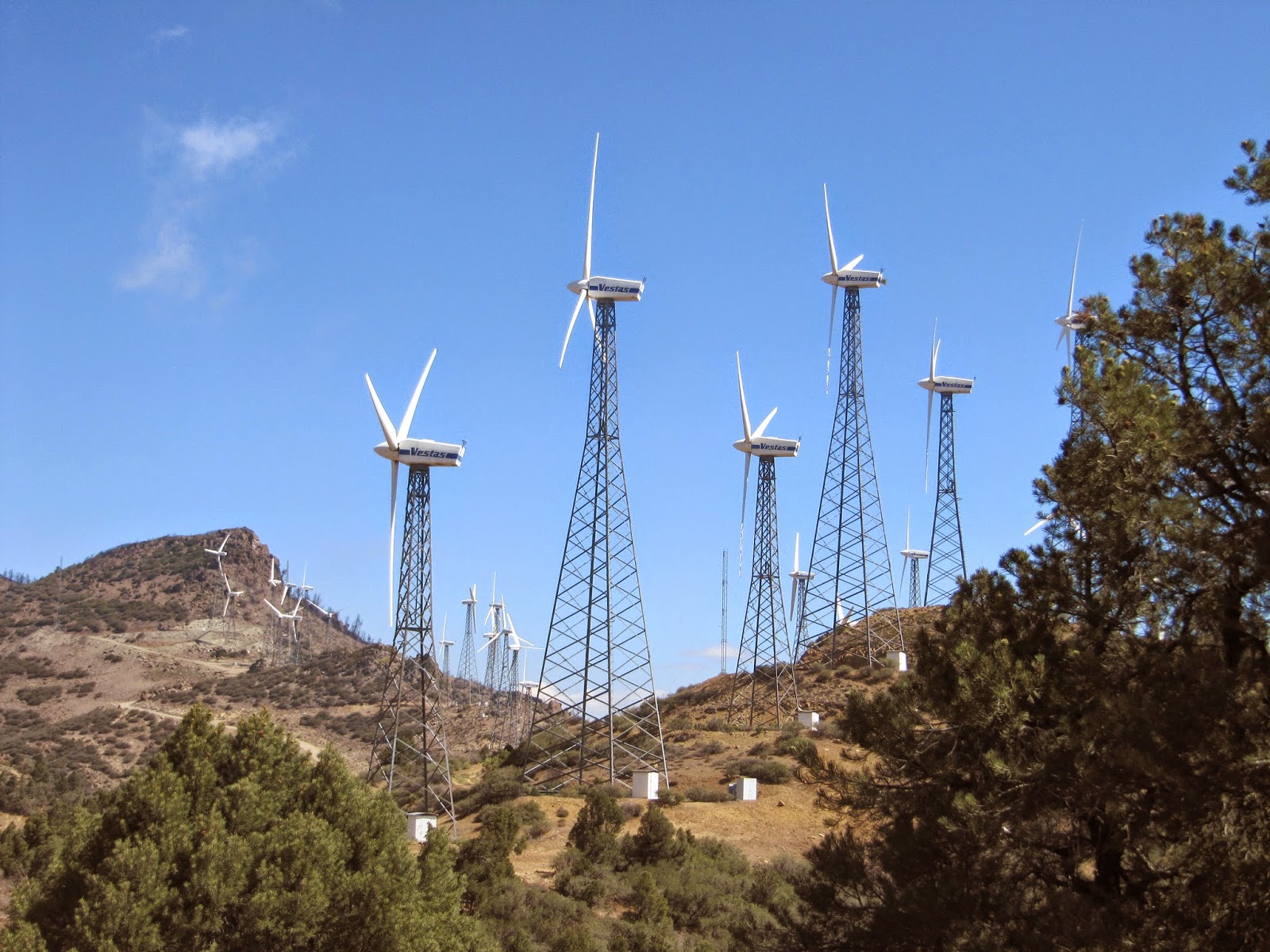 These are older model wind turbines. 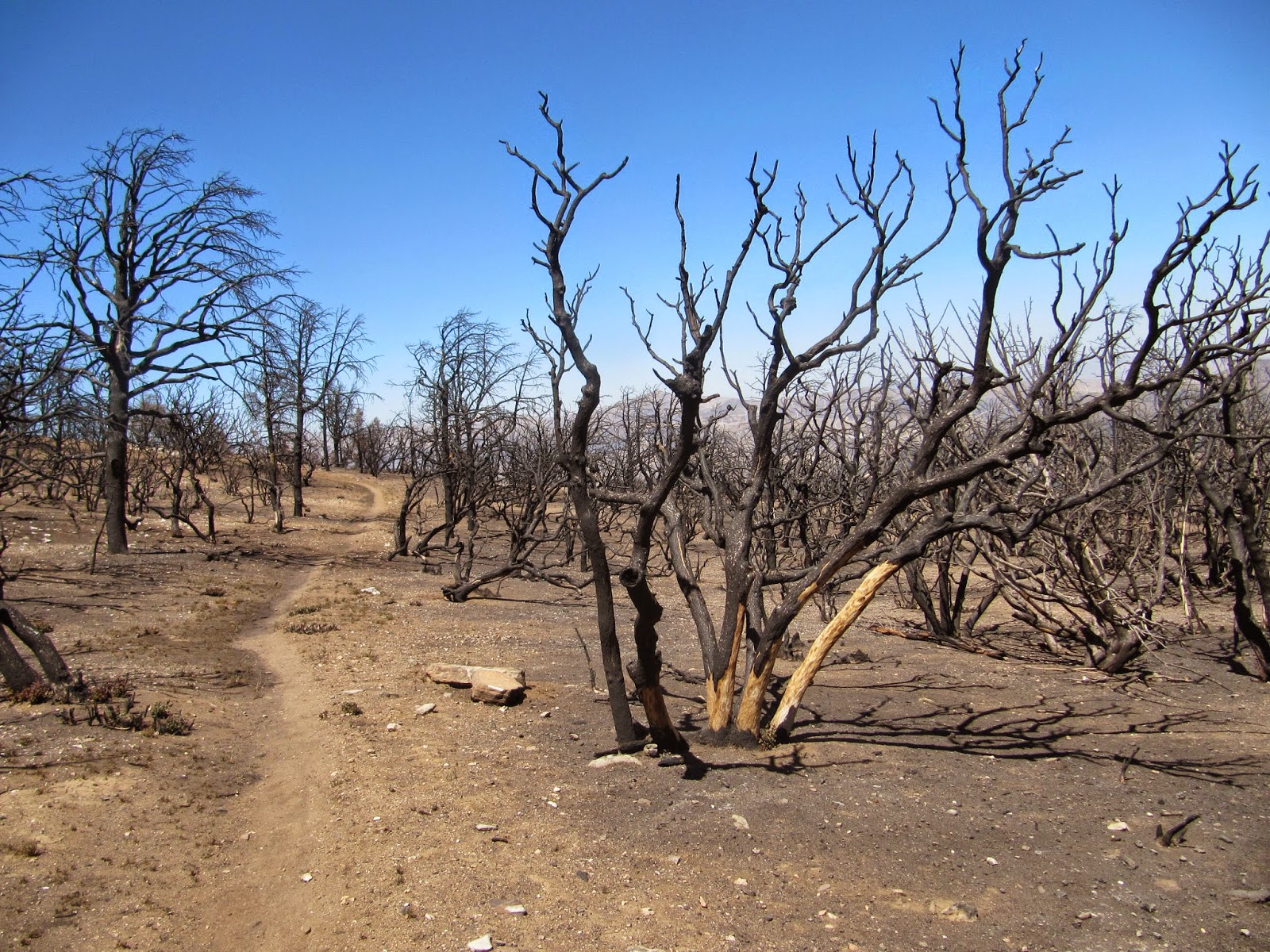 Once again, fire has swept through the landscape. 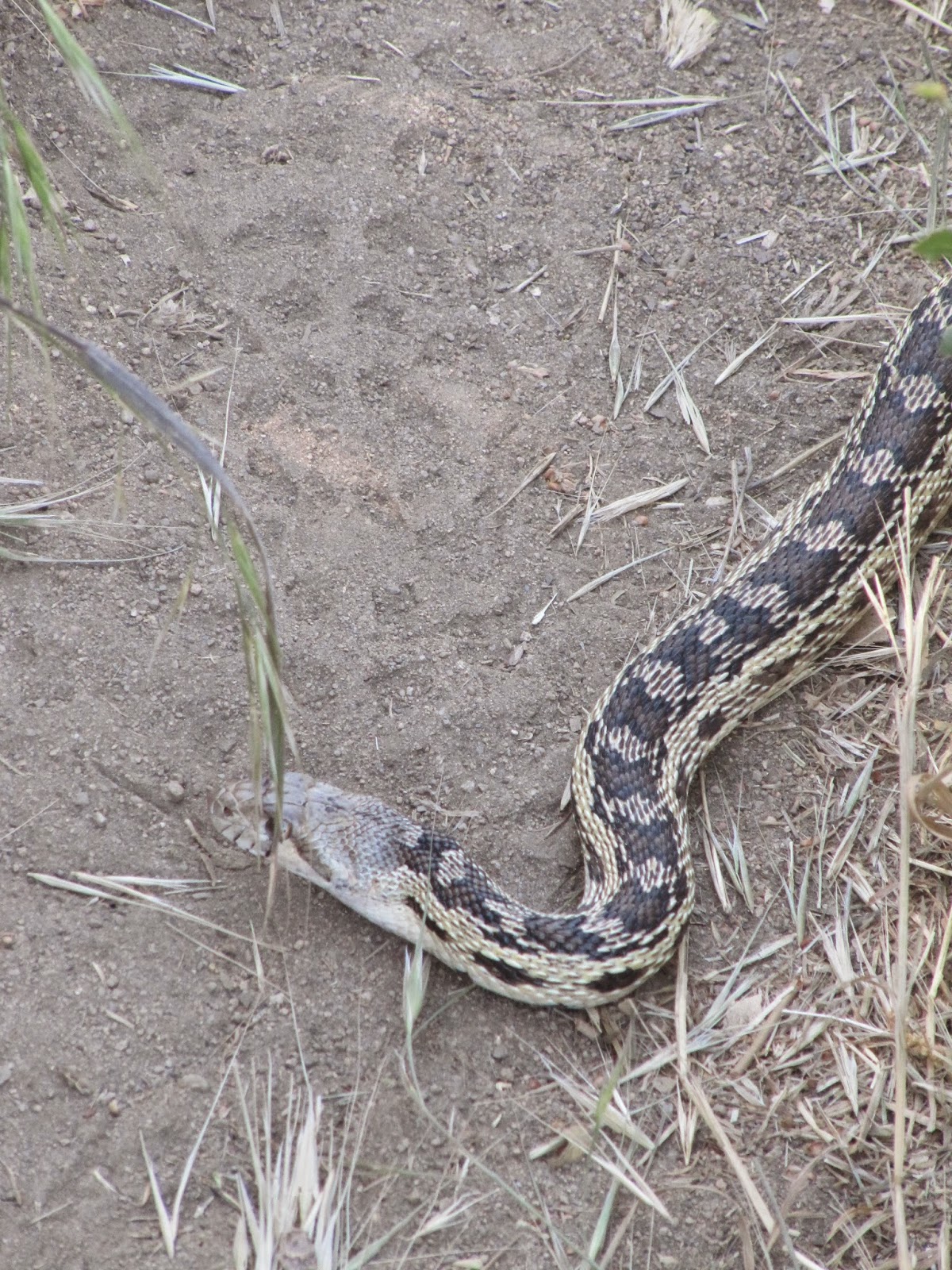 One of just many rattlesnakes encountered on the trail. 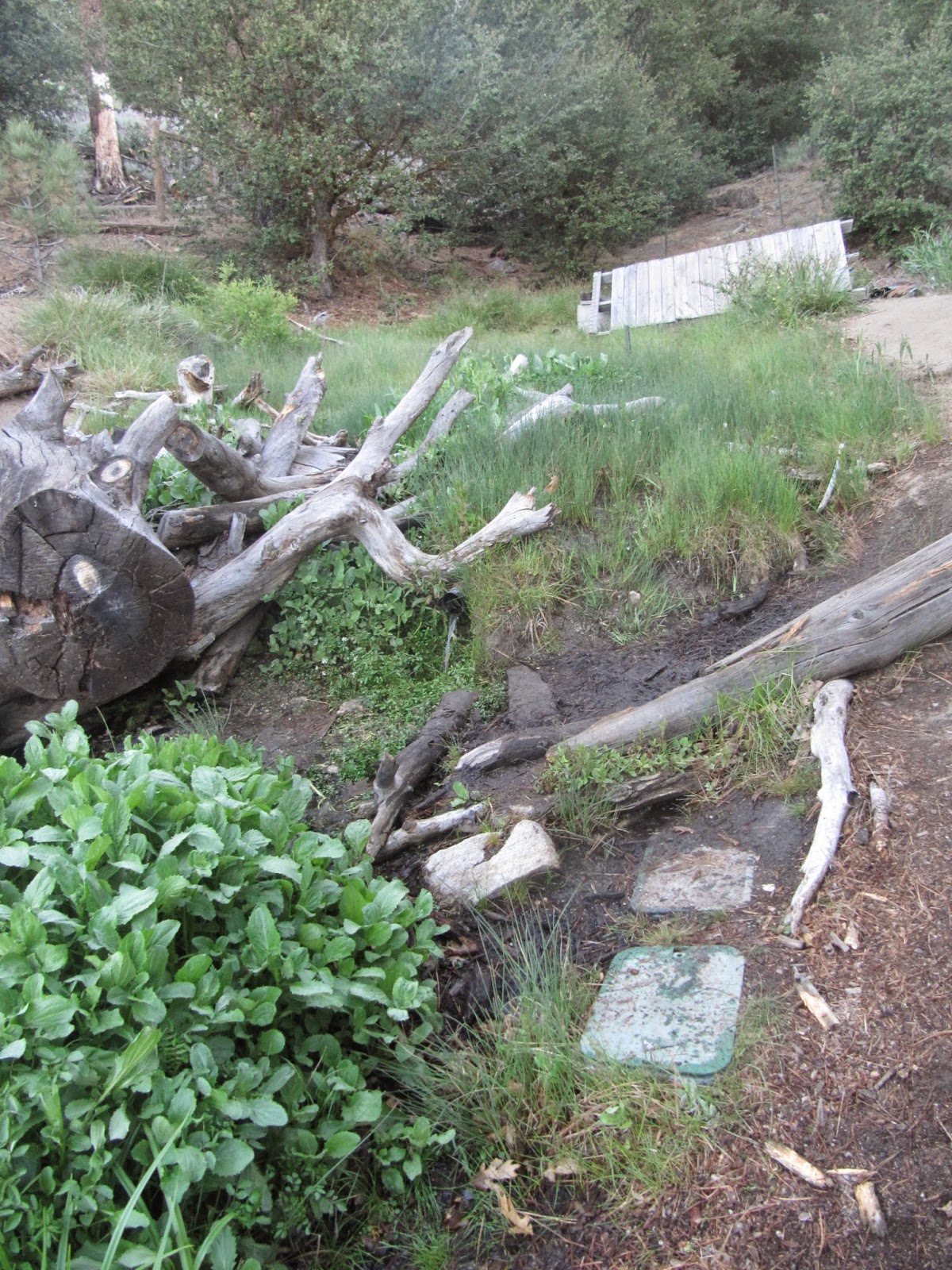 After a short spur trail, I came to Robin Bird spring. 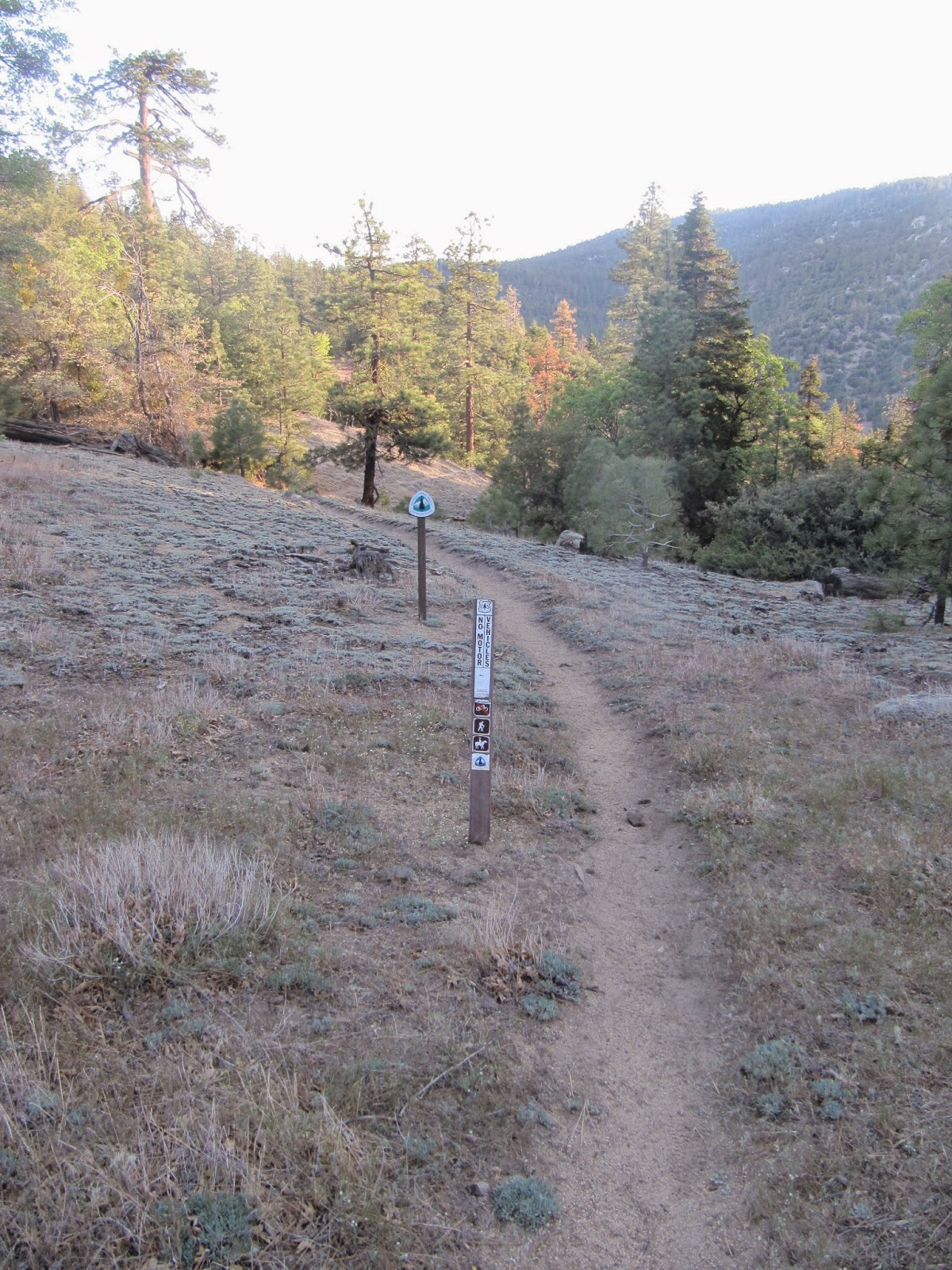 Each land manager, (BLM, Forest Service, National Park) through which the PCT passes is responsible for marking the trail. 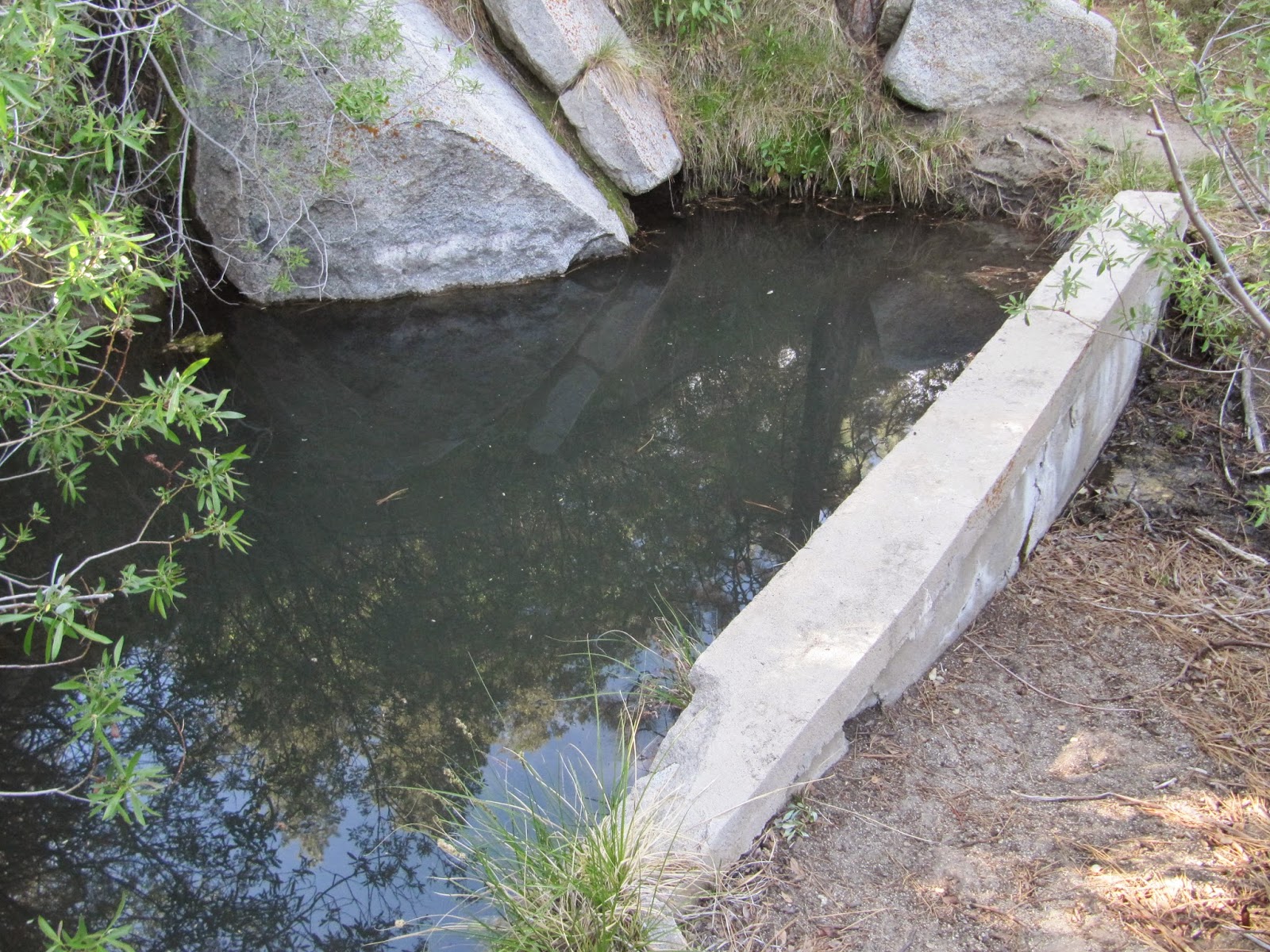 Another water source that was developed in times past.