I left my pack sitting in the driveway as I went in search of an empty cot in one of the tents.  Donna said the city limits her to fifty visitors per night, and there were close to that many when I arrived; however, more than a few had already been there a day or two and were making preparations to leave that evening, as the temperatures were cooling down.

Without much effort, I found an empty cot in a tent that already had two other hikers.  I hurried back to the garage, retrieved my pack, and hustled back to the tent to claim my spot for the night.  Then, I returned to the garage and sorted through the hundred or so resupply packages until I located mine, plus a couple of letters from family back home.

In the late afternoon, after a shower and a change into clean clothes, I rode one of the loaner bikes into town to do some shopping at the grocery store, and to enjoy a second chocolate malt at the restaurant across the street.  My best purchase at the grocery store was a pint of Ben and Jerry’s banana split ice cream.  Back at Donna’s place, I sat on my cot in the doorway of my tent and slowly devoured the ever-softening ice cream.

It was an overwhelming feeling to be in the presence of someone who goes out of their way to give help and assistance to others who are total strangers.  Yes, we hikers make a twenty-dollar donation to the Saufleys to help offset their expenses, but I’m sure it didn’t come close to covering their out-of-pocket expenses to host trail hikers summer after summer.

With the exception of their home proper, Jeff and Donna have turned over their entire property for the benefit of the hiking community, and they’ve been doing it for a number of years.  They have a well-oiled machine that functions with great efficiency.  Their cause and generosity is infectious.  They lead by example and their example rubs off on every soul who stays awhile at the compound.

Far, far up the trail, whenever hikers would congregate, often the subject of the Saufley’s generosity, as well as that of Ziggy and the Bear, would enter the conversation.  My interaction with Jeff and Donna Saufley, Ziggy and the Bear, and other unnamed trail angels would impact me greater than any other experience I would have on the trail.  My most memorable and enduring impressions of hiking the Pacific Crest Trail would be my encounters with the humble and unselfish trail angels who provided meals, lodging, transportation, and human comfort, just because they could.  Meeting these wonderful and inspiring people helped to reaffirm the basic goodness of humanity.  I witnessed firsthand the lasting impression the actions of unselfish trail angels had on others.

A young female hiker who went by the trail name Girlie Girl, using her own limited funds, bought a watermelon and a large bag of cherries, and went through the compound offering hikers slices of sweet watermelon and cherries.  Later, when I went among the tents seeking to exchange AAA batteries for the smaller AA batteries needed for my Spot Tracker, Girlie Girl gave me one of her own packets of the more expensive Lithium batteries and asked for nothing in return.  I was very touched by her kindness and charity, both for the batteries, the watermelon, and the cherries.  She had no idea how her simple actions so profoundly impacted her fellow hikers.

Staying in one of the tents next to mine was Commando; I hadn’t seen him since Campo, and I had to remind him who I was.  I asked him if he had found the older hiker I was concerned about, and had he needed water?  Commando said he hadn’t seen such an individual, but then added that there were a lot of other hikers on the trail, and they would have shared water with anyone who needed it.

And, for the first time, I met Hot Wings and her husband, Yabba Dabba, who were walking the trail with their two Malamute dogs, beautiful, gentle animals with light-blue eyes.  I would crisscross their path all the way to the Canadian border. 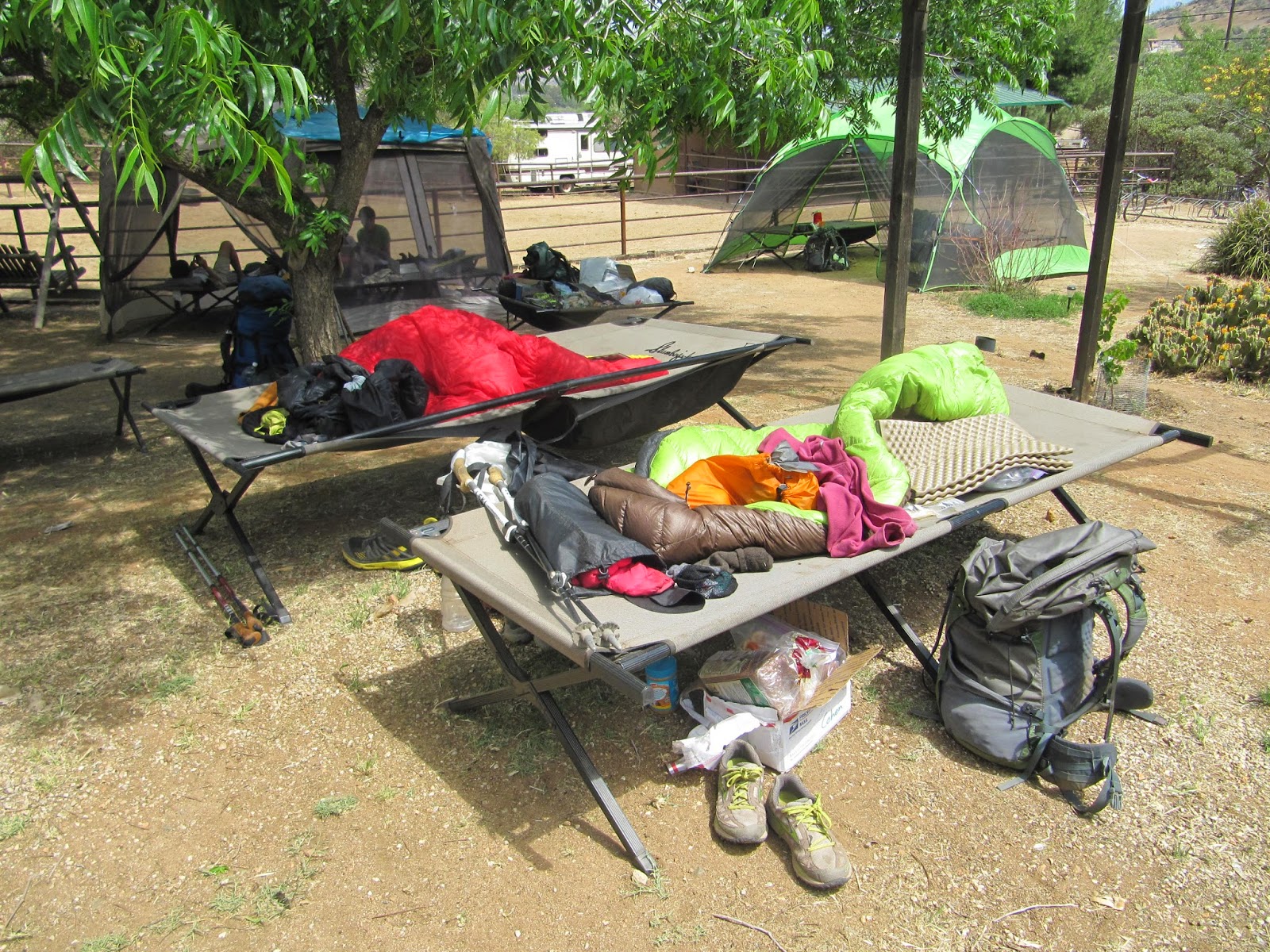 If there was no room inside a tent, one could always set up a cot under the shade of a tree. 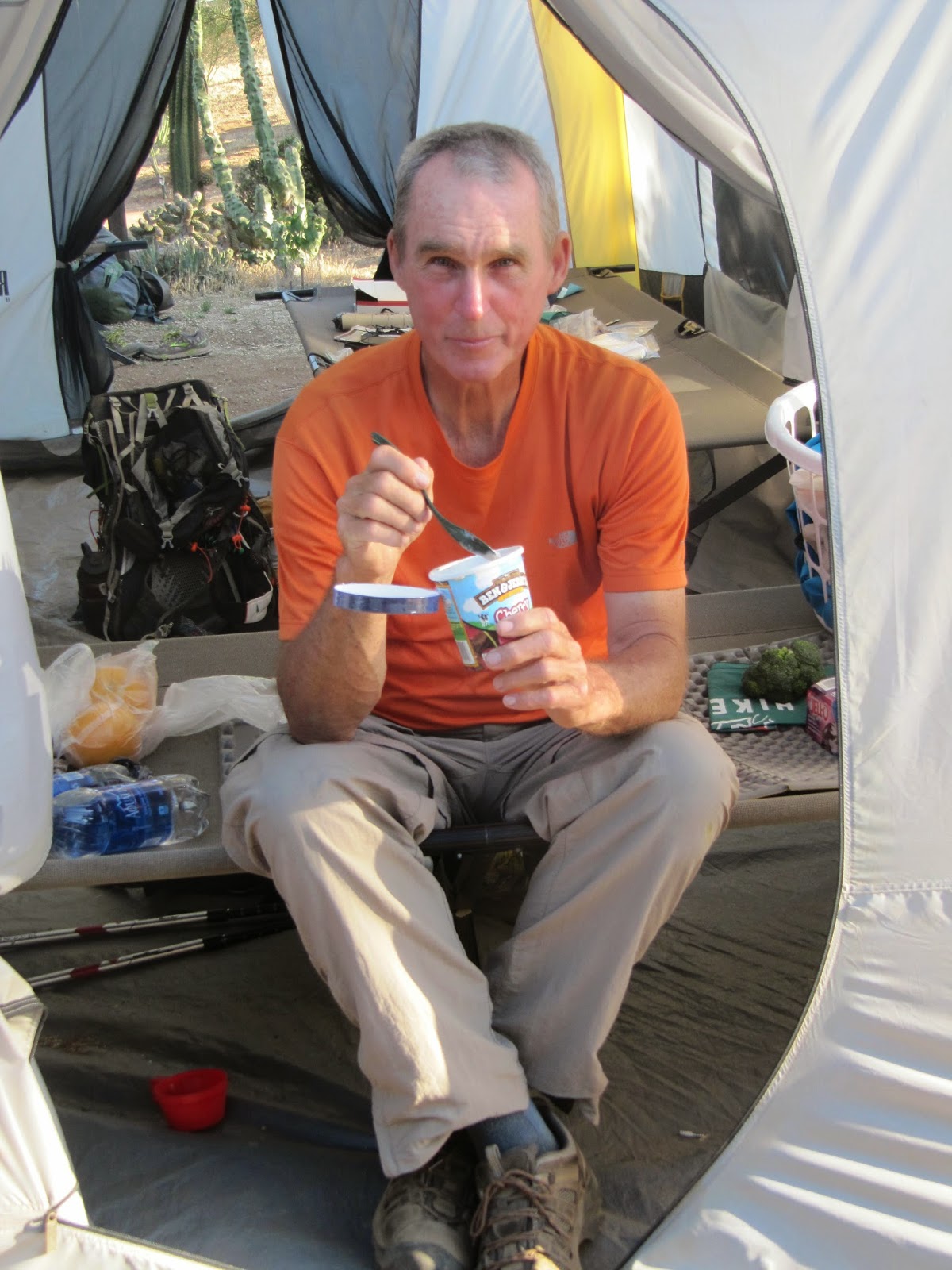 After my foray into town, I sat on my cot and enjoyed the whole pint of Ben and Jerry's ice cream. 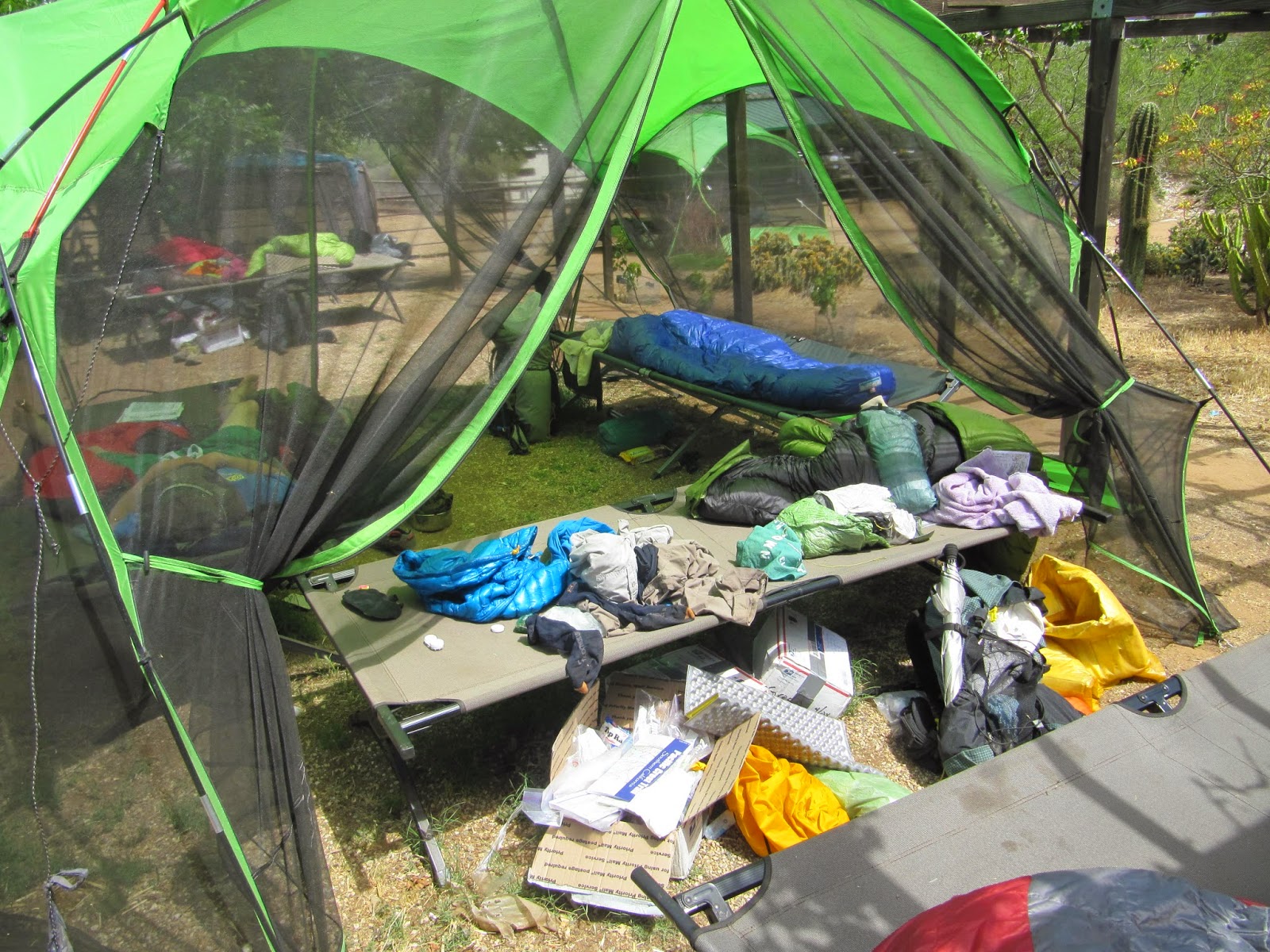 It was nice to have a place to sort through one's resupply box.