The weather was looking ominous as I got back on the trail.  The wind was pushing massive storm clouds over the mountains from the west and out into the desert where they would dissipate.  The clouds would roll over the tops of the mountain and literally fall down the hills, so heavy were they with moisture.

“I’m walking through the clouds,” I thought to myself, “and they are wet.”

It wasn’t wet like a rainstorm, but wet from so much moisture that simply condensed out of the clouds.  And with the wind gusting strong, it made for a miserable walk.  The hills in front of me were obscured and it looked like the storm was going to last awhile.  There was little vegetation on the hills to provide protection from the elements, and setting up a tent in the onslaught of the powerful wind seemed ludicrous, so I pushed on.

In a lull in the storm, I did stop long enough to dig in my pack for my rain gear, which I put on and that helped, but after another hour, I called it quits, and set up my tent on the lee side of a giant shrub-like tree and crawled in to wait out the storm.  Presently, I heard voices outside my tent; I peered out and saw Dingo (female) and Mudd (male) standing next to the tree considering what to do.  They were wet and cold and without rain gear.  They too decided to put up their tent and wait for better weather.

Within ten minutes, another voice was heard outside the tent.  This time, it was Stats.  He too was wet and cold, but he elected to move on as he felt the storm would subside.  That left the three of us sitting there in our tents, feeling a little deflated for being such wimps in the face of a moderate storm.  So, without any fanfare, we pulled our tents down, stuffed them into their stuff sacks, shouldered our packs, and set off after Stats.

It was good we did, for the farther north we traveled the less intense the storm became until it was just overcast cloudy weather.  By noon, I had arrived at the point where the trail crossed two sets of train tracks and then paralleled Highway 58 until it crossed over the highway at the Cameron Overpass.  A hiker could also get to Tehachapi or Mojave by following Highway 58, but it would be difficult because the traffic was traveling at freeway speeds and motorists were less inclined to pick up, what to them, look like unkempt tramps.

On the north side of Highway 58, I found two couples, Kumquat and Tour Guide, Shark Bite and Faucet, having lunch.  They were just sitting in the dirt, on the trail, paying no attention to the noise of passing trucks and cars whizzing by.  I asked to join them, and when they scooted over to make room for me, I took that as a positive affirmation and squatted in the dirt beside them.  I prepared one tortilla sandwich with peanut butter and grape jam and one tortilla sandwich with a tuna salad spread that came packaged in an aluminum foil pouch.  To this, I added a few cookies and some dried fruit.

After a half-hour break, we repacked our packs, stood up, brushed the dirt off our pants, shouldered the heavy packs, wrapped our hands around our trekking poles, and started up the trail. I let everyone pass, and fell in behind the group. Within twenty minutes, they were out of sight, and I was left to walk alone. 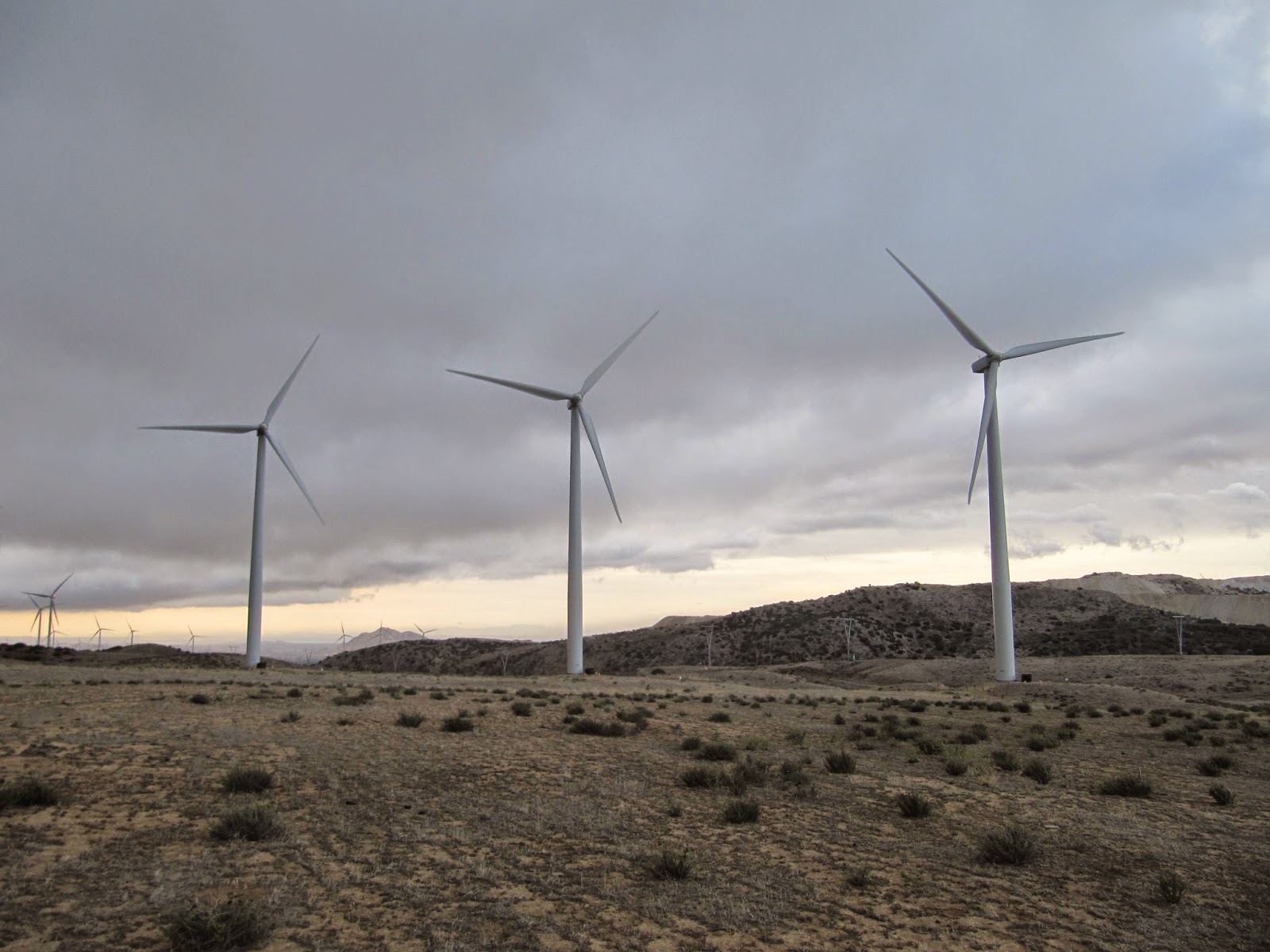 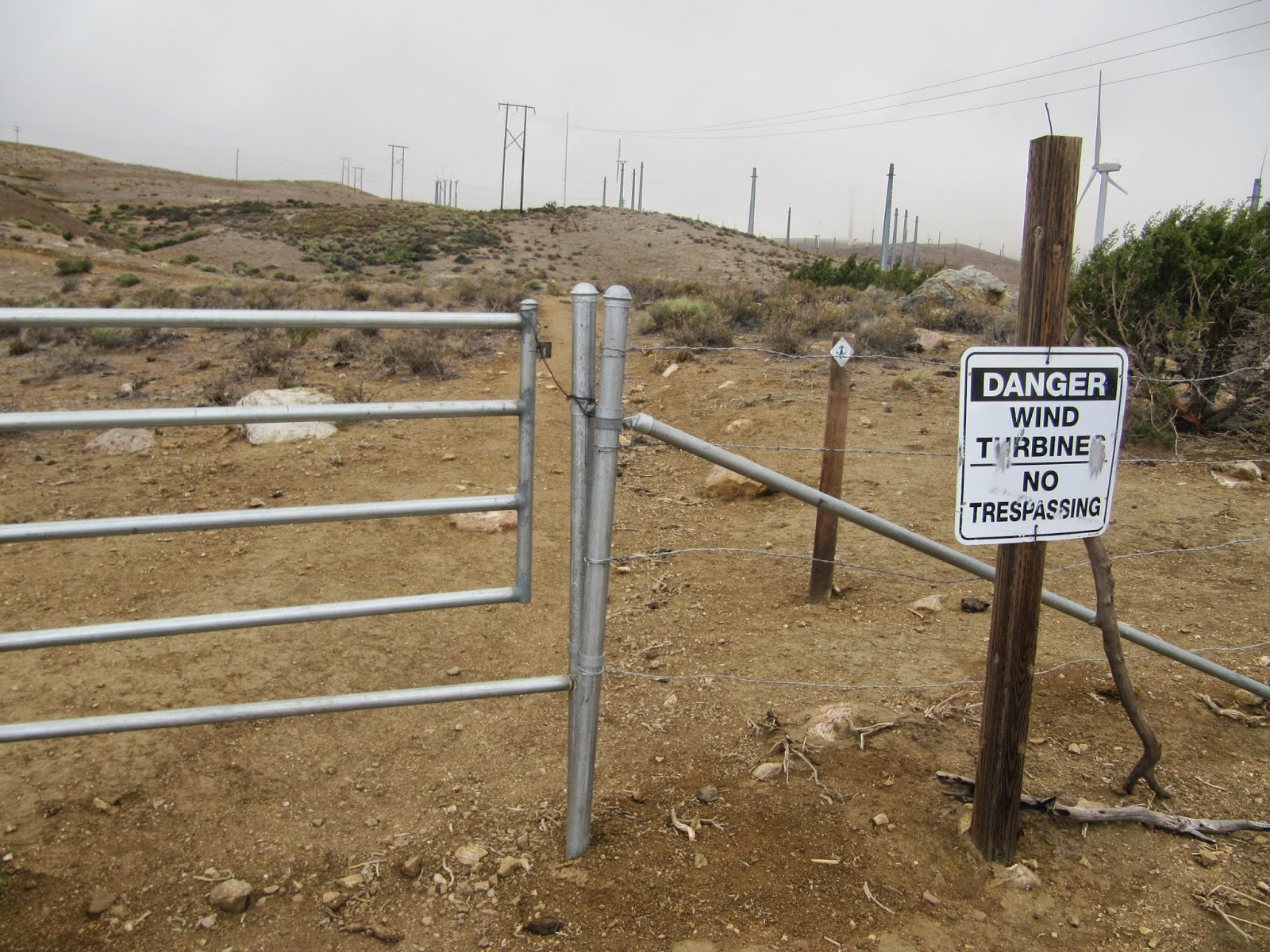 It's dangerous say's the sign, but feel free to pass through anyway. Just be sure to lock the gate. 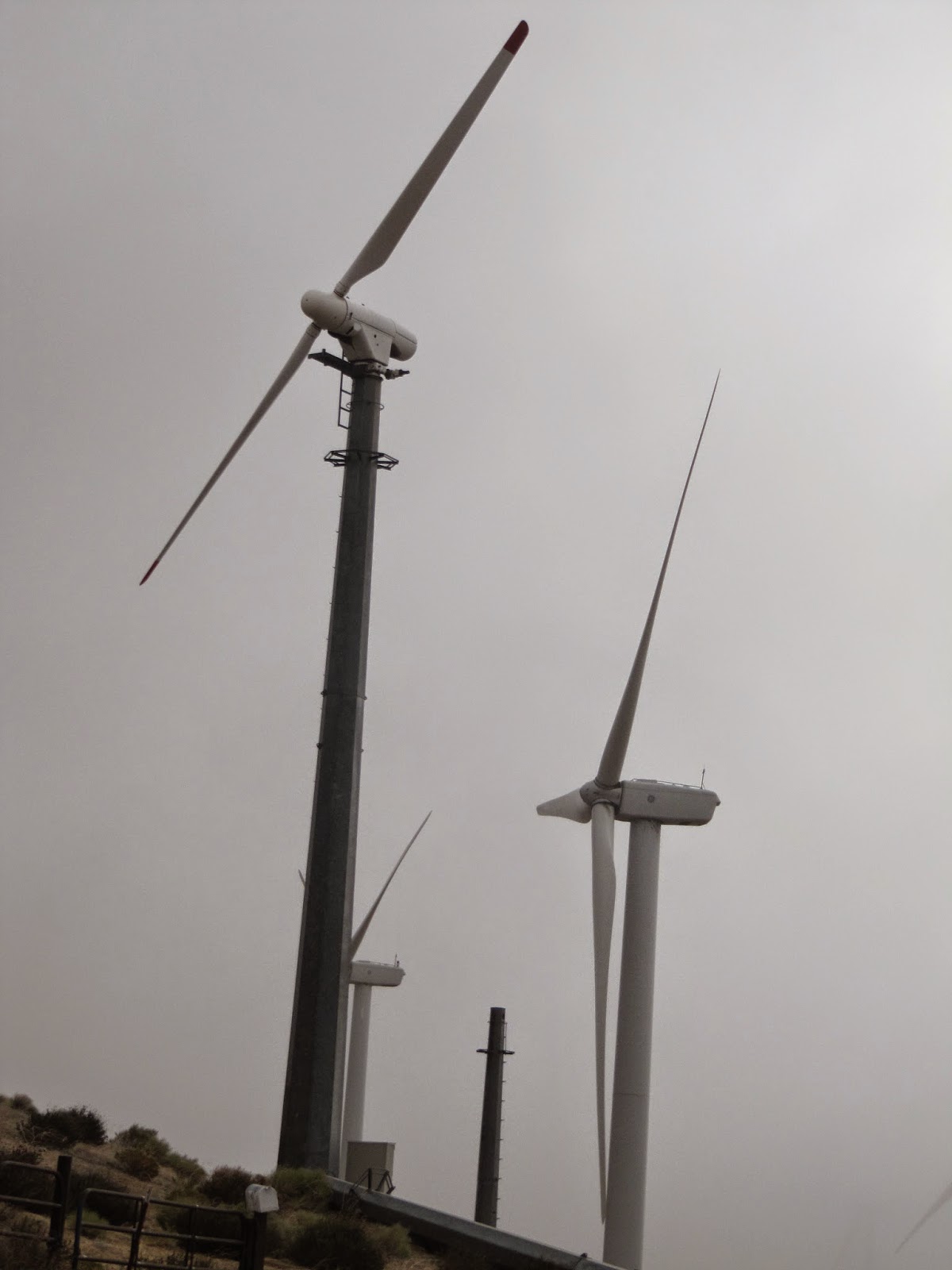 A heavy wet storm rolls over the Tehachapi Mountains, only to dissipate on the hot, dry valley floor of the Mojave Deseret. It is the constant moment of air rushing in to fill the void left by the rising hot air from the desert floor, that causes the wind to blow incessantly. 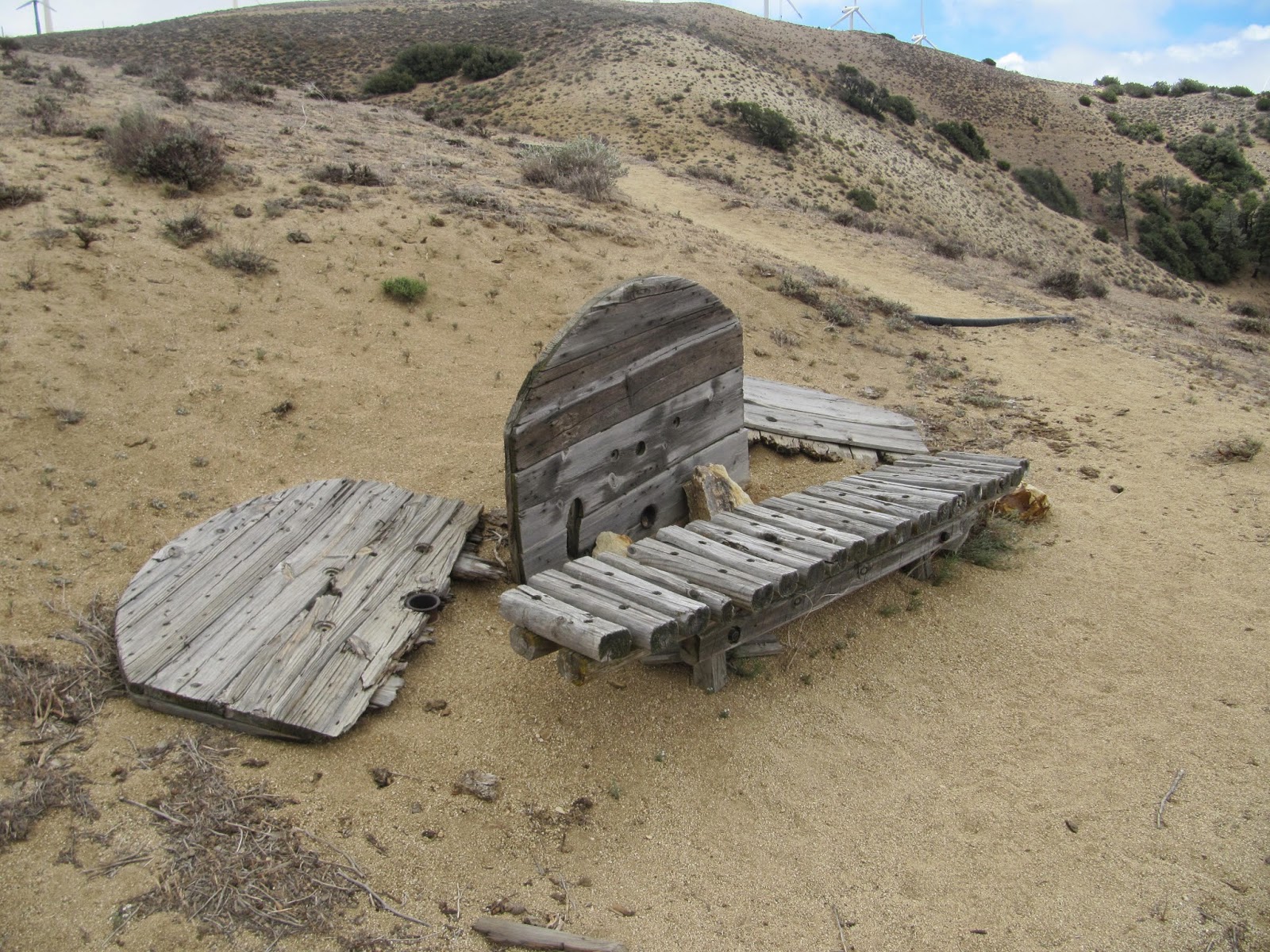 Someone, from long ago, went to a lot of effort to construct this bench. Notice the trail passing in front of it. 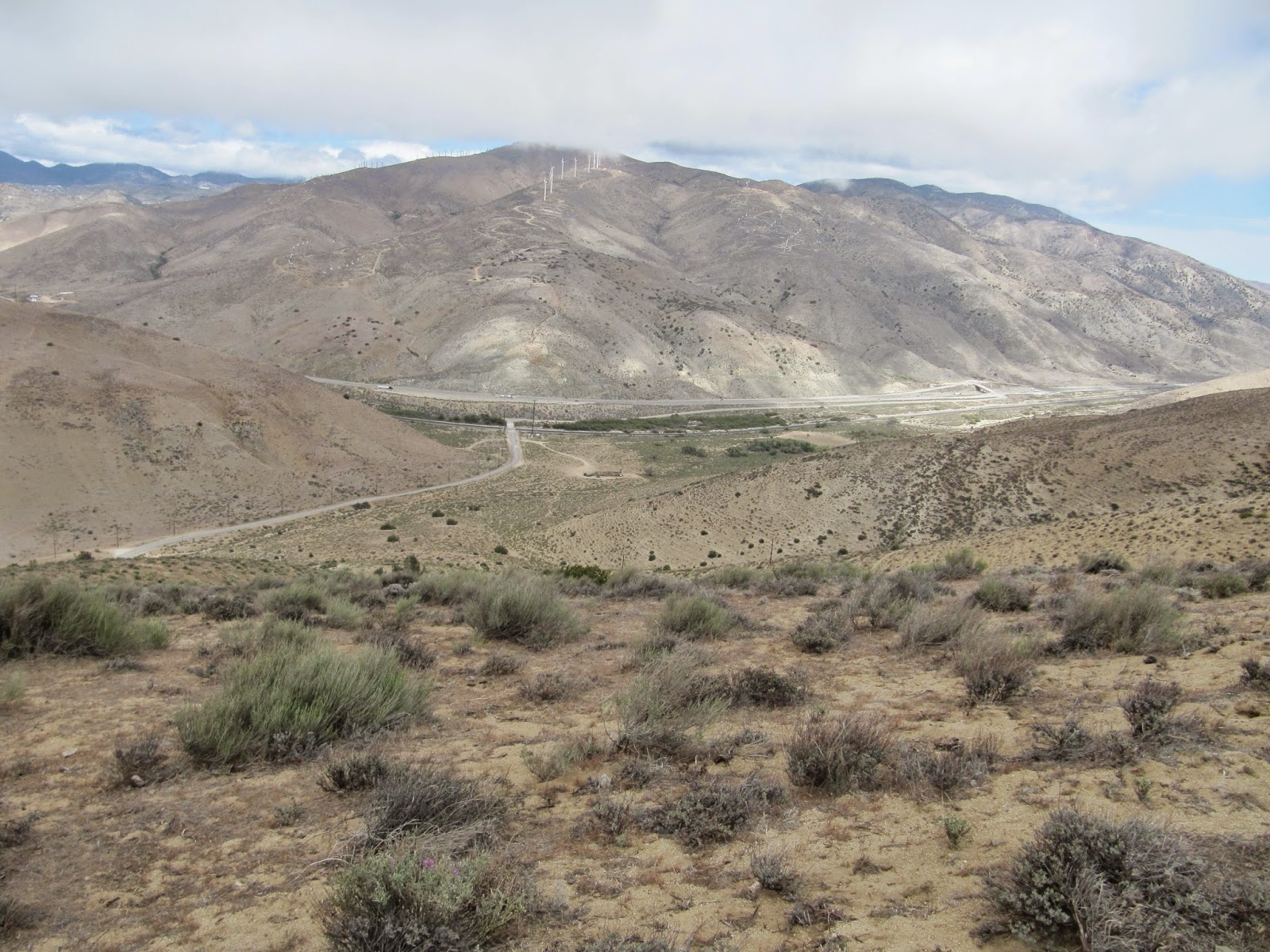 In the distance is Highway 58 connecting the towns of Tehachapi with Mojave. 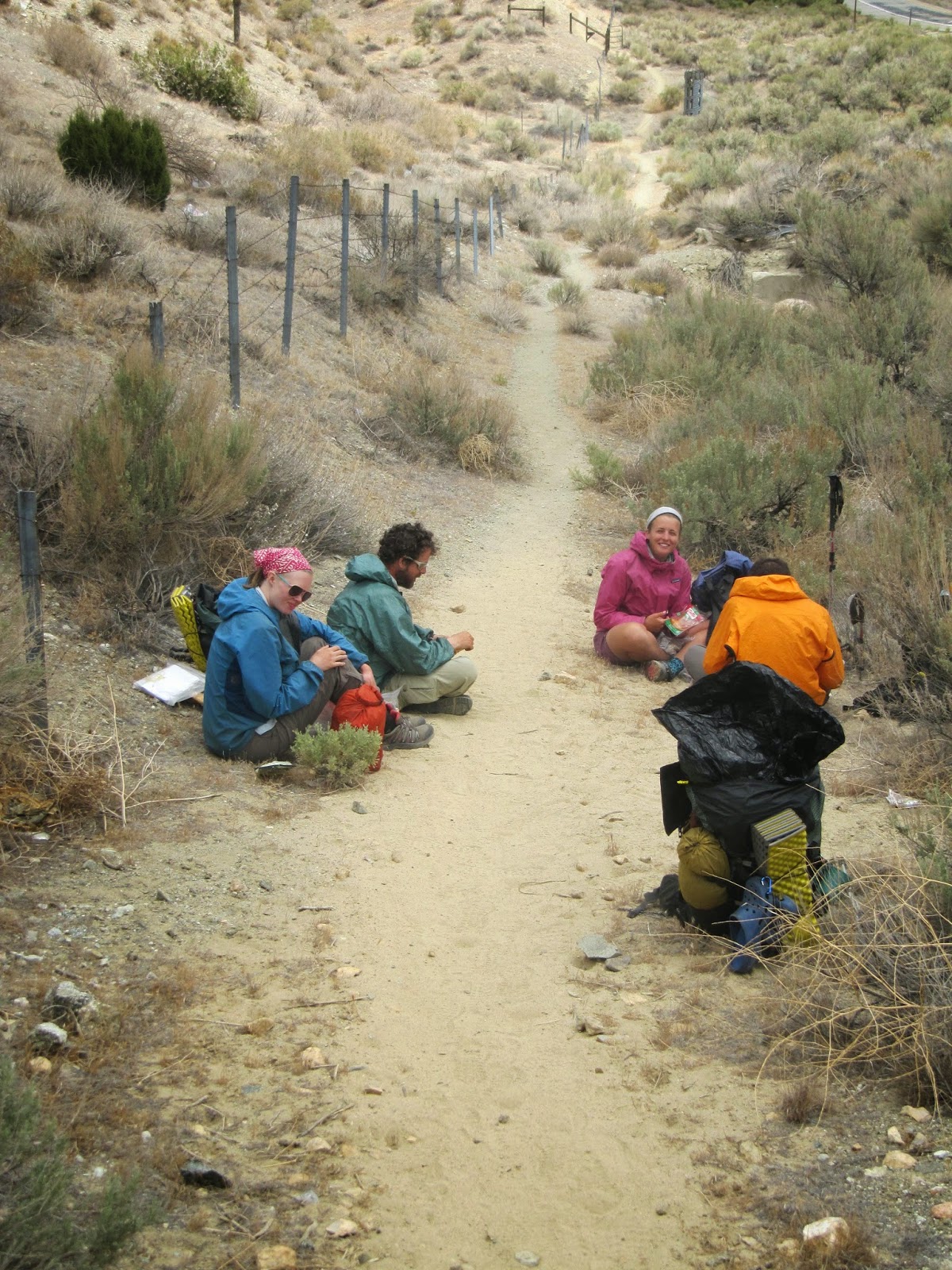 After crossing over Hwy. 58, a group of hikers for the town of Mojave stop for a lunch break. 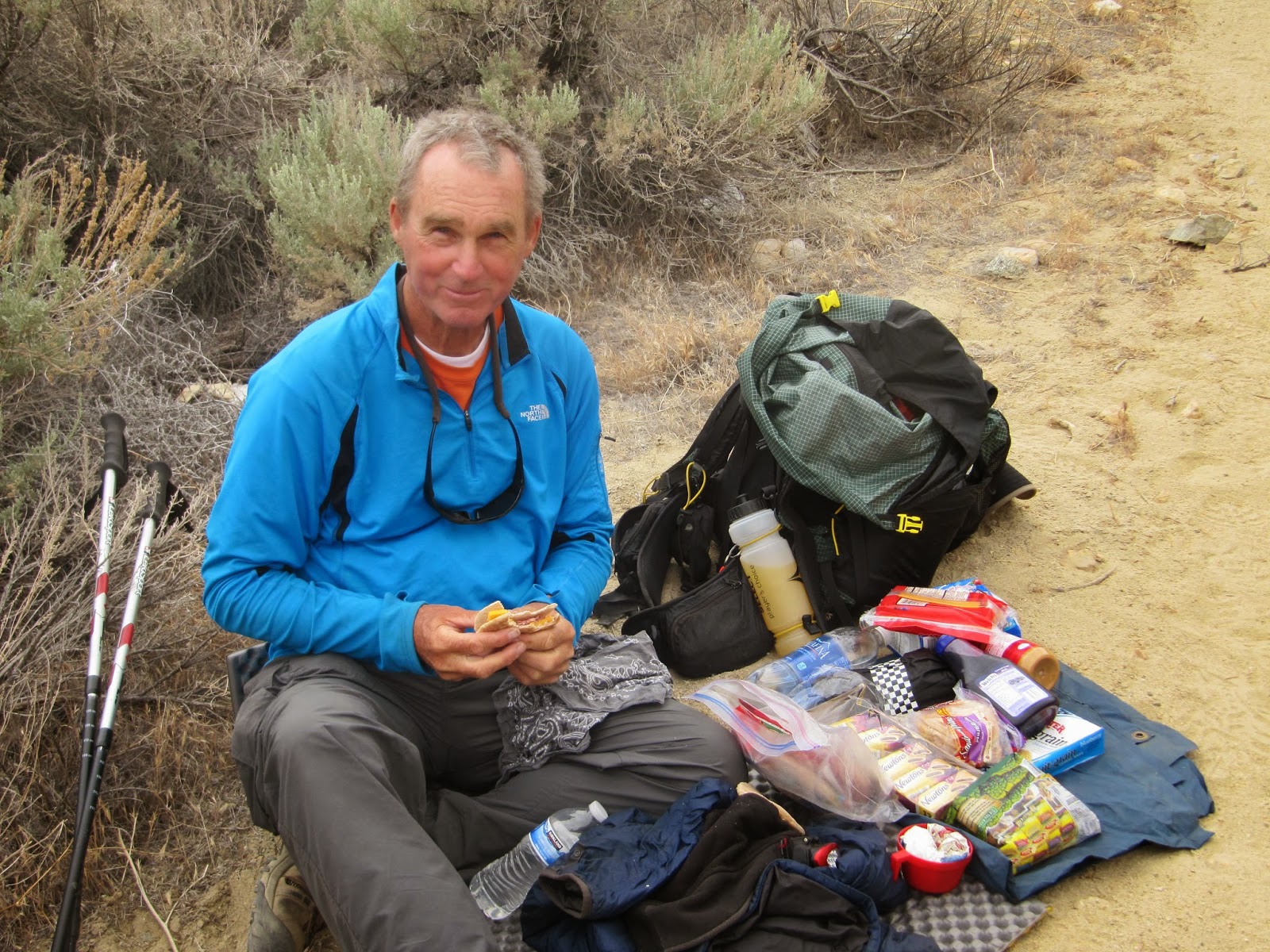 I join the group for lunch. I have all my goodies laid out on my ground cloth.