Passing the Fox Mill Spring, I decided to fill my water bottles here.  The spring was off the trail a bit, so I unloaded my pack, collected my water bottles and scurried down the side trail to the small, gurgling stream flowing from underneath a pile of willow and sagebrush debris.  This water I treated with bleach.  The spring lay adjacent to the ruins of a barite mill, and according to the Southern California PCT guidebook, barite is used in drilling mud and was mined and processed here until the early 1950s.

Drilling mud is an essential element in well drilling.  It helps to cool the drill bits and removes cuttings from the borehole by suspending the sand and rock particles, then floating them to the surface.  At the surface, the cuttings are separated from the drilling mud and the mud is returned to the mud pit to be recycled.

Not far from the Fox Mill Spring, I came across a low-volume stream meandering through the grass and bushes beside the trail.  Actually, the trail crossed over it, and in one stride I could step across it.  However, before crossing it, I stopped to look at the flowing water.  There is something about water that fascinates me, and for some reason, I enjoy observing it.  Maybe it’s because it’s so vital out here in the wilderness; it’s just not something to be taken for granted.  Unlike at home, where a turn of the faucet will get you all the water you need, here I’m reliant on ponds, lakes, springs, and streams to meet my daily needs, and even then, I have to carry enough with me to get me the next source.

And so I watched the water for a few moments.  Presently, I heard a rustling in a tree a few yards from the stream; I turned my gaze from the water to the tree to see if I could locate the source of the disturbance.  To my delight and amusement, I saw a small bear cub sitting in the crouch of the tree, peering around a large limb watching me.  I called out to him/her,

“Hello, big buddy; how’s it going up there?”

The cub just continued to watch me.  I pulled my camera out of my pocket and clicked off a few shots.  I then began to think, where there was a bear cub, there was likely to be a mama bear around also.  I pocketed my camera, said “Good-bye” to my little friend and headed on up the trail.  Hikers who caught up with me later on said they also encountered the little cub, which by now had come down out of the tree and was walking on the trail.  They, too, were concerned about a mama bear, but said they didn’t see one.

I had walked through a number of burn areas, but the one I was entering now had to be one of the most devastating and destructive fires Southern California had seen.  It was called the Manter fire, and it destroyed upwards of sixty-seven thousand acres of brush and timberland.  At this point on the trail, I was about fourteen miles from Kennedy Meadows, and the burn area extended from here to there.

It was started in 2000 in an area called Manter Meadows, a popular camping area for hikers and backpackers.  It consumed much of the timber in the Domeland Wilderness off to the west of the trail, and advanced far enough north to threaten the structures of Kennedy Meadows.  Eight buildings were lost to the fire and the residents of Kennedy Meadows had to evacuate the area.

The fire was so hot that it baked the soil, making it virtually impossible for anything to grow, except invasive weeds.  It will take many, many years for this land to recover.  I also passed by another burn area called the Woodpecker Meadow fire that burned in 1947.  Since that time, trees have been unable to replace themselves and the land has been taken over by sagebrush and other shrubs. 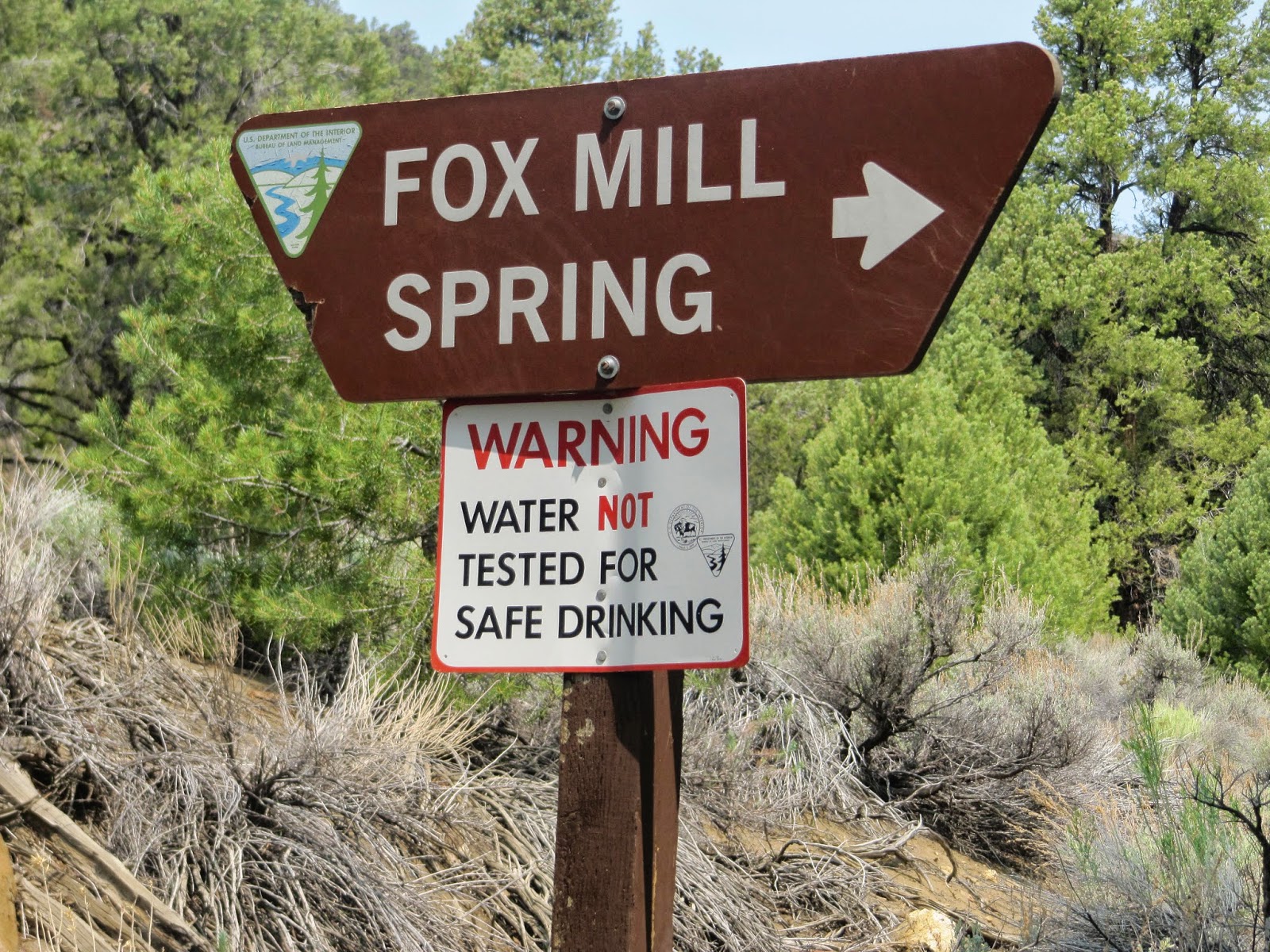 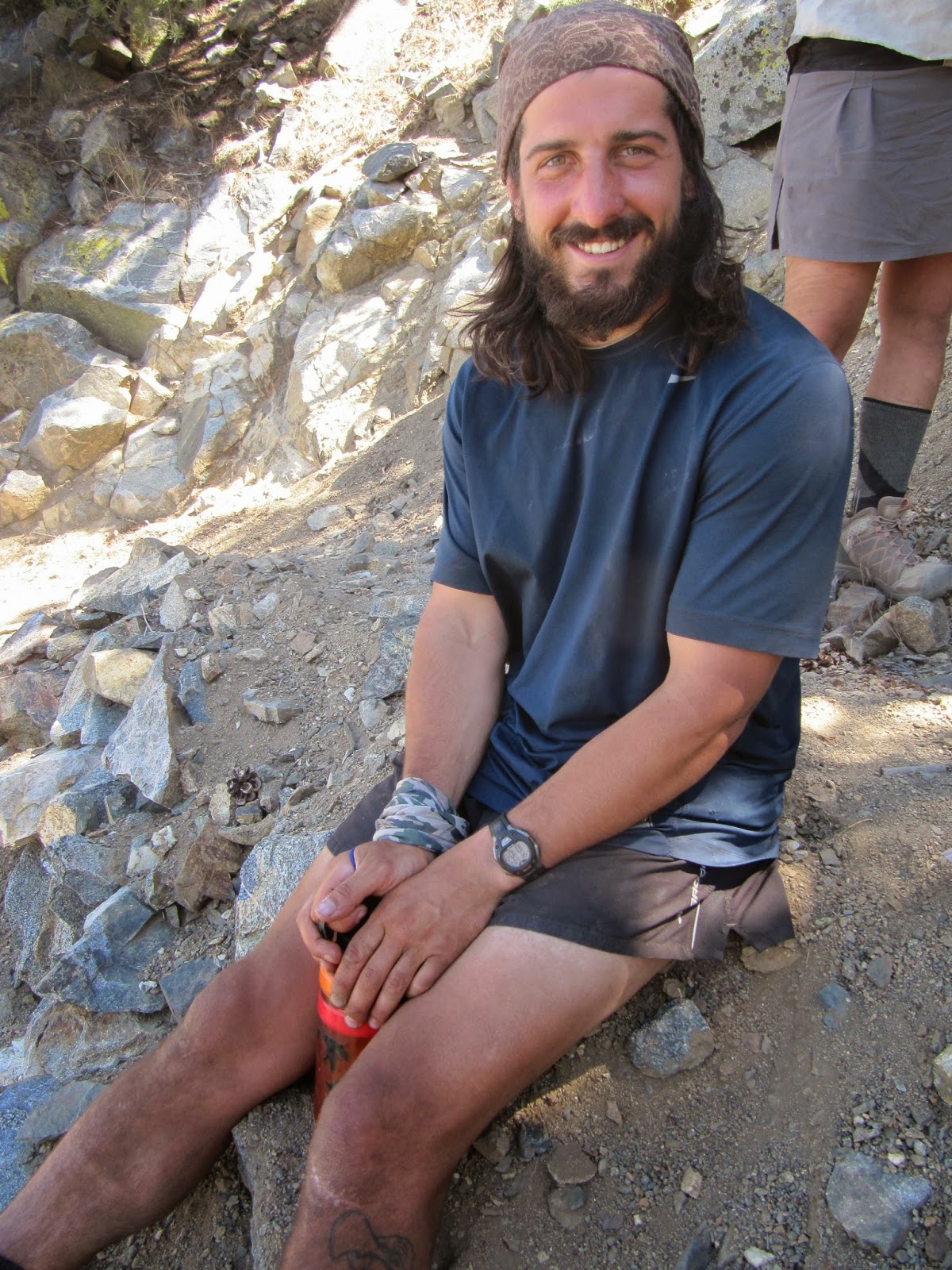 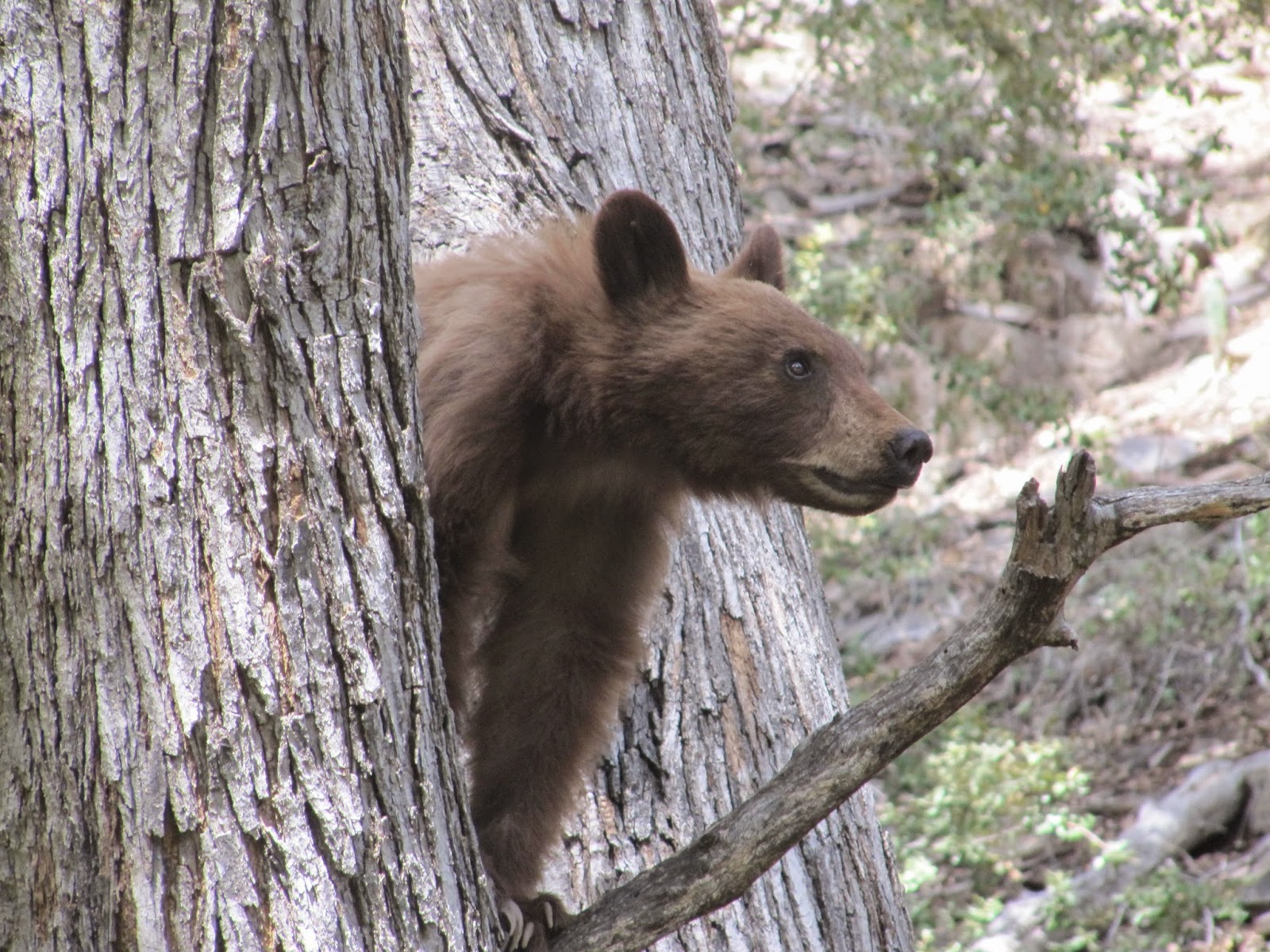 Little bear cub in the tree. Where's there's a little one, there's usually a Mama bear around. I didn't stick around to find out. 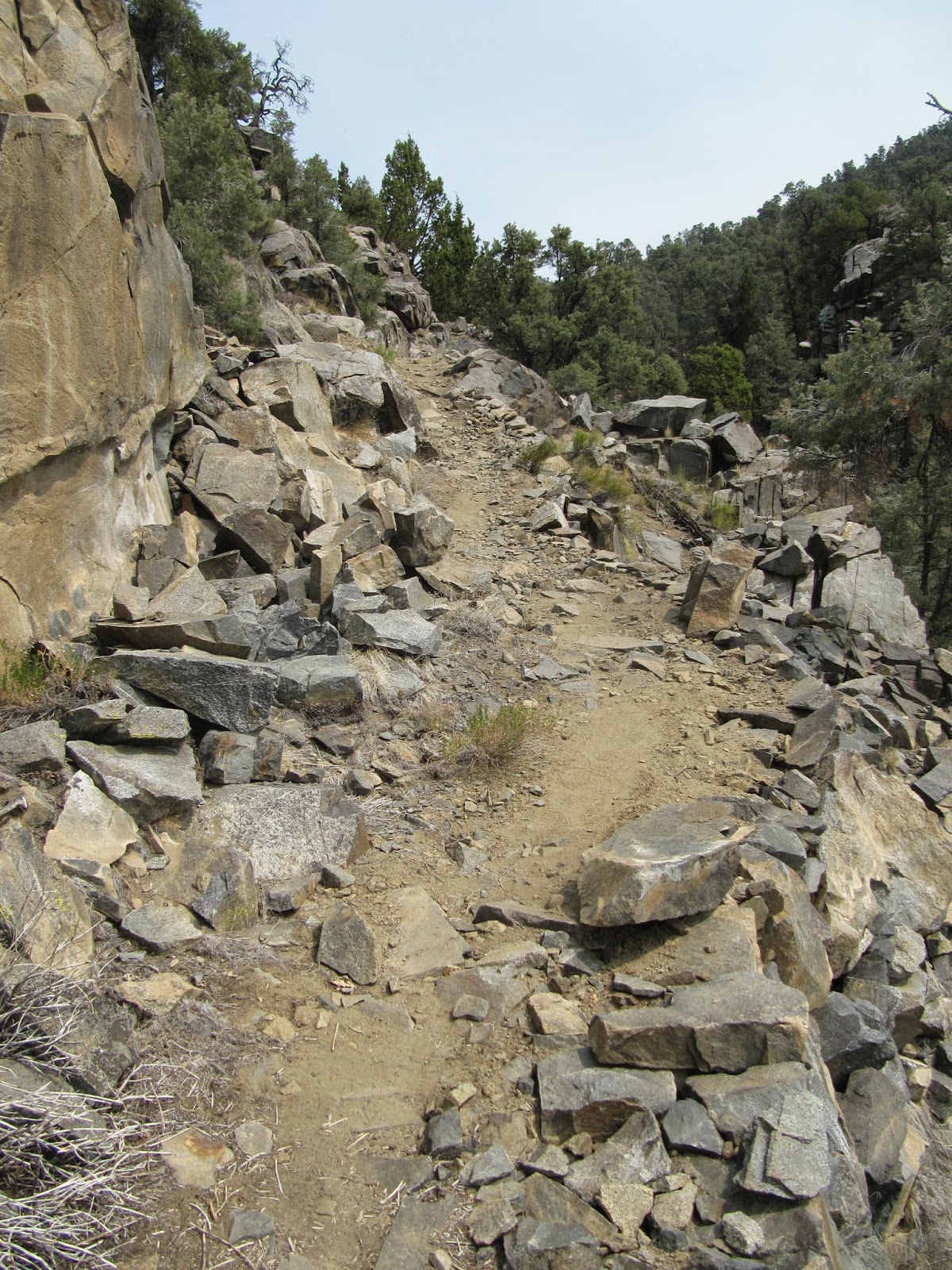 The well maintained trail as it continues upwards. 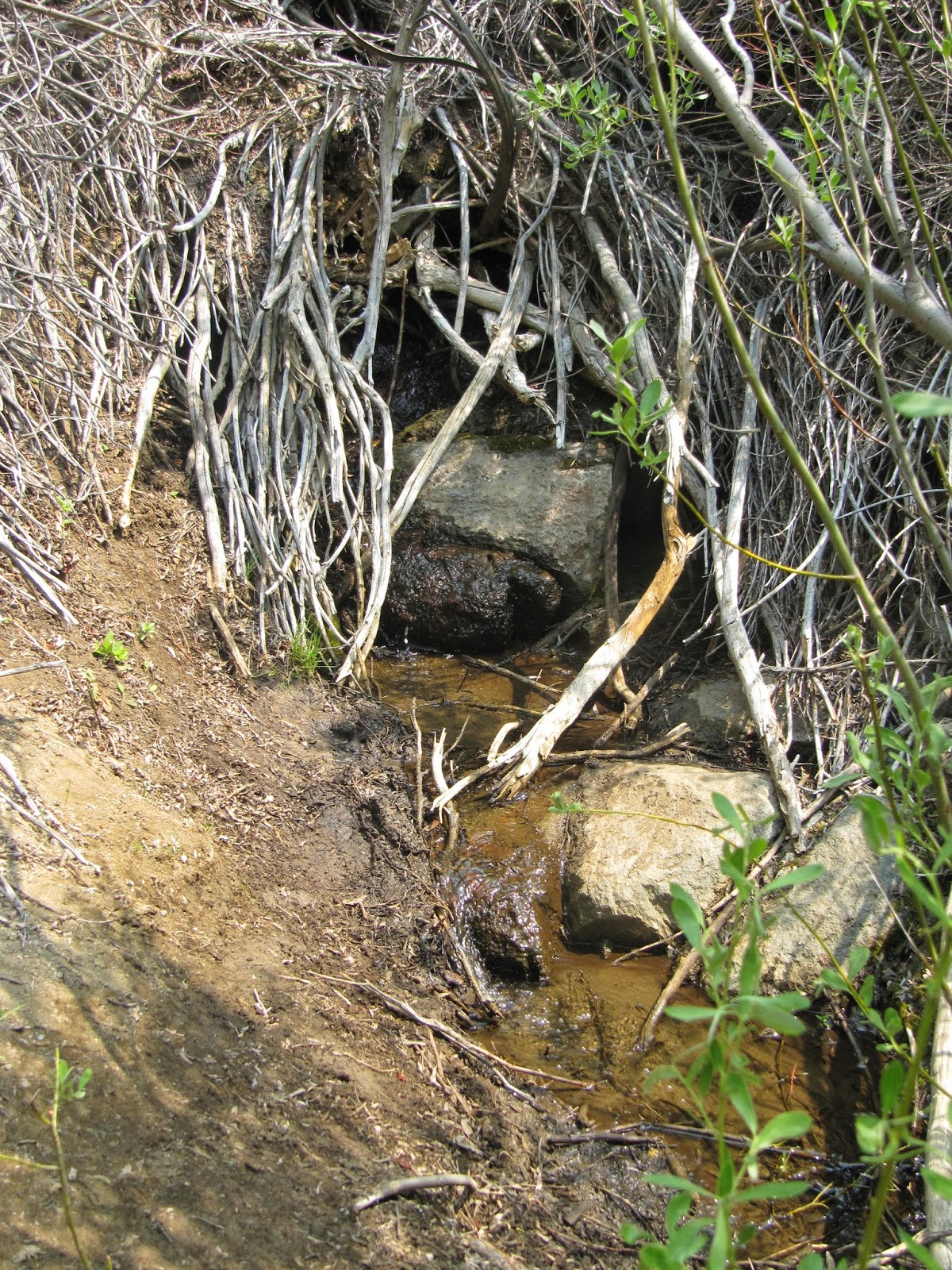 This is actual spring at Fox Mill and where I obtained my water. 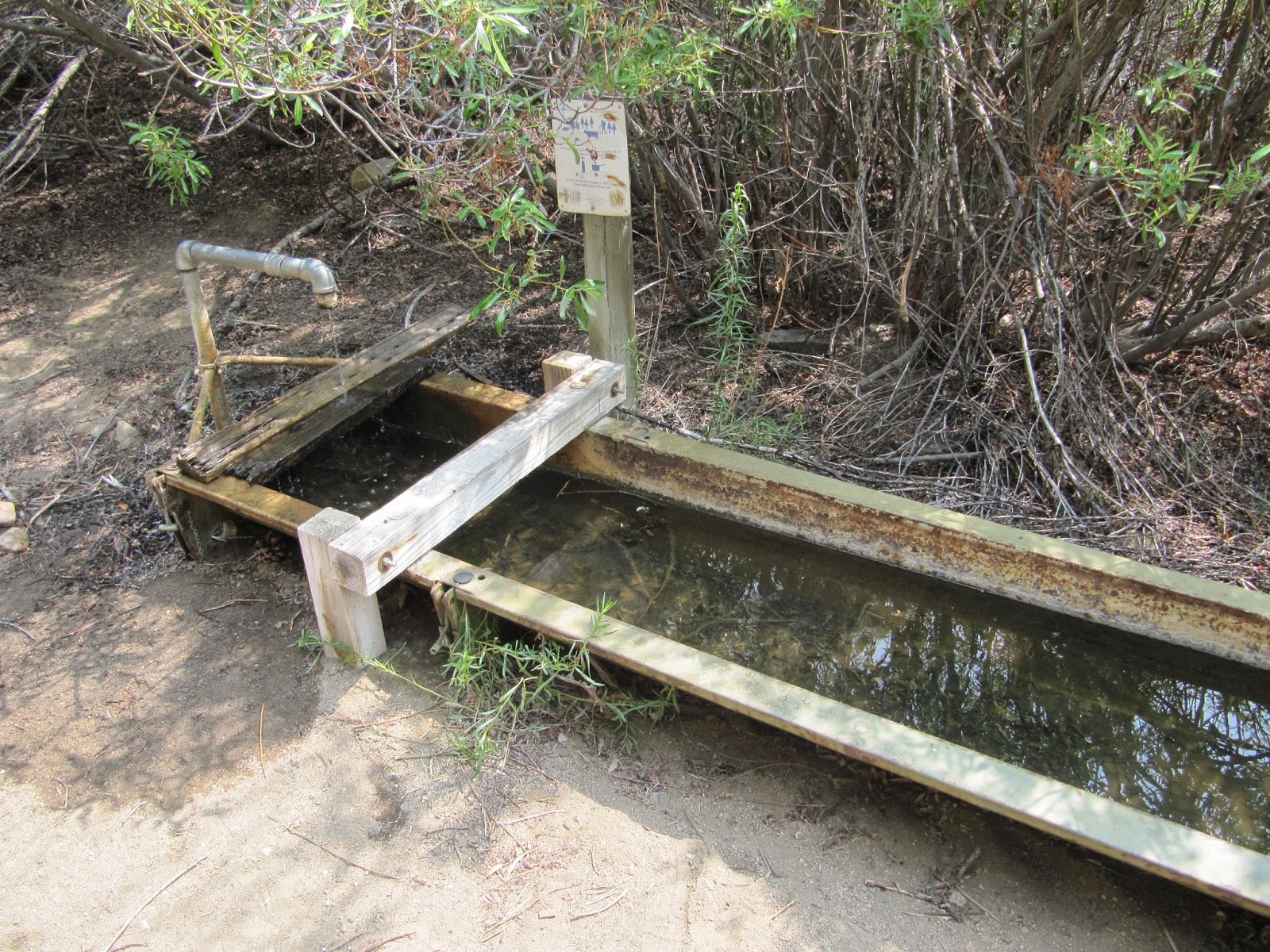 Water from the spring eventually entered this trough, but I chose to take water from a running source.