There was no one up and moving when I walked past the horse corral and slipped out the gate of Saufley’s horse property and Hiker Heaven.  It was 5:00 a.m. and I was determined to get as far as possible into the hills beyond Agua Dulce before the sun came up.  The actual trailhead was several miles from Hiker Heaven, and when a car slowed down and stopped beside me and the female driver asked me if I’d like a ride to the trailhead, I accepted her offer.

I don’t like surprises, and knowing that the trail might be a little hard to find in the dark, I checked for the exact location yesterday while I was riding my loaner bicycle.  It’s good I did, because after following a paved road for a couple of miles, it veered off into a residential/business section of the city and continued on dirt roads.

It’s probably just a personal quirk with me, but I will go to great lengths to avoid surprises and to acquaint myself with my surroundings before I commit myself to a new itinerary.
By midmorning, I was up into the mountains above Agua Dulce.  My next resupply was in the town of Mojave at the Motel 6, 112 miles to the north.  Of these 112 miles, approximately sixty-three miles would be hiking west along the mountain ridgetops of Sawmill Mountain, with the remaining fifty-nine miles trekking north across the Mojave Desert.

An interesting note from the Southern California PCT guidebook says that originally, when this section of the PCT was laid out, it was to have continued along the ridgetops of the Liebre Mountains that overlooked the Mojave Desert and then connect with the southern end of the Tehachapi Mountains beyond the town of Mojave.

However, the fly in the ointment was the large Tejon Ranch that sat astride the Liebre Mountains, and from whom permission was not obtained to run the trail across their private land holdings.  That’s why the mountain trail crosses sixty miles of the arid, waterless Mojave Desert. (Schaffer)

I’m not at all displeased that the trail didn’t continue across the mountaintops; this was a journey of experiences and not experiencing the harsh realities and extreme weather conditions of the arid desert would have shortchanged the overall Pacific Crest Trail journey.

After a day’s hiking, I camped in the trees next to the paved San Francisquito Canyon Road.  A few yards to the west of my campsite was the Green Valley Fire Station, and after dinner, I walked to the fire station to obtain five liters of water for tomorrow’s hike.  Farther down the road, was Casa de Luna in Green Valley, the trail angel home of Terrie and Joe Anderson.  They have all the amenities for helping trail hikers, and their reputation as a party on rest stop makes for a mandatory visit for many trekkers.  Having just cleaned up at the Saufly’s the day before, I didn’t feel the need to visit their home.

The next few days were a nonstop descent out of the Angeles National Forest to Antelope Valley and the Mojave Desert.  I would pass spur roads and trails that led to reservoirs and lakes, but most of all, it was trekking along the ridgetops of Sawmill and Liebre Mountains, always in a westerly direction as the trail skirted around the far western end of Antelope Valley/Mojave Desert.

Some miles the tread passed through stands of Coulter pines and interior black oaks, while other miles darted in and out of dry washes and rocky gulches covered with chaparral.  As the trail continued to drop in elevation, sagebrush became the dominant ground cover.  Water was sparse, but several springs had been developed that proved sufficient for the needs of the hikers.  Whenever I came to a water source, I forced myself to drink as much as possible, and then filled all my containers, even if it meant carrying more water than needed to get to the next spring.

I preferred to carry the weight of the water, knowing that I had enough, rather than risk running short or having to ration what I had until reaching the next water source.  On the evening of the third day, I camped just above the paved Pine Canyon Road, at a water cache maintained by the good people at Hiker Town, a trail angel gathering place about ten miles up the trail. 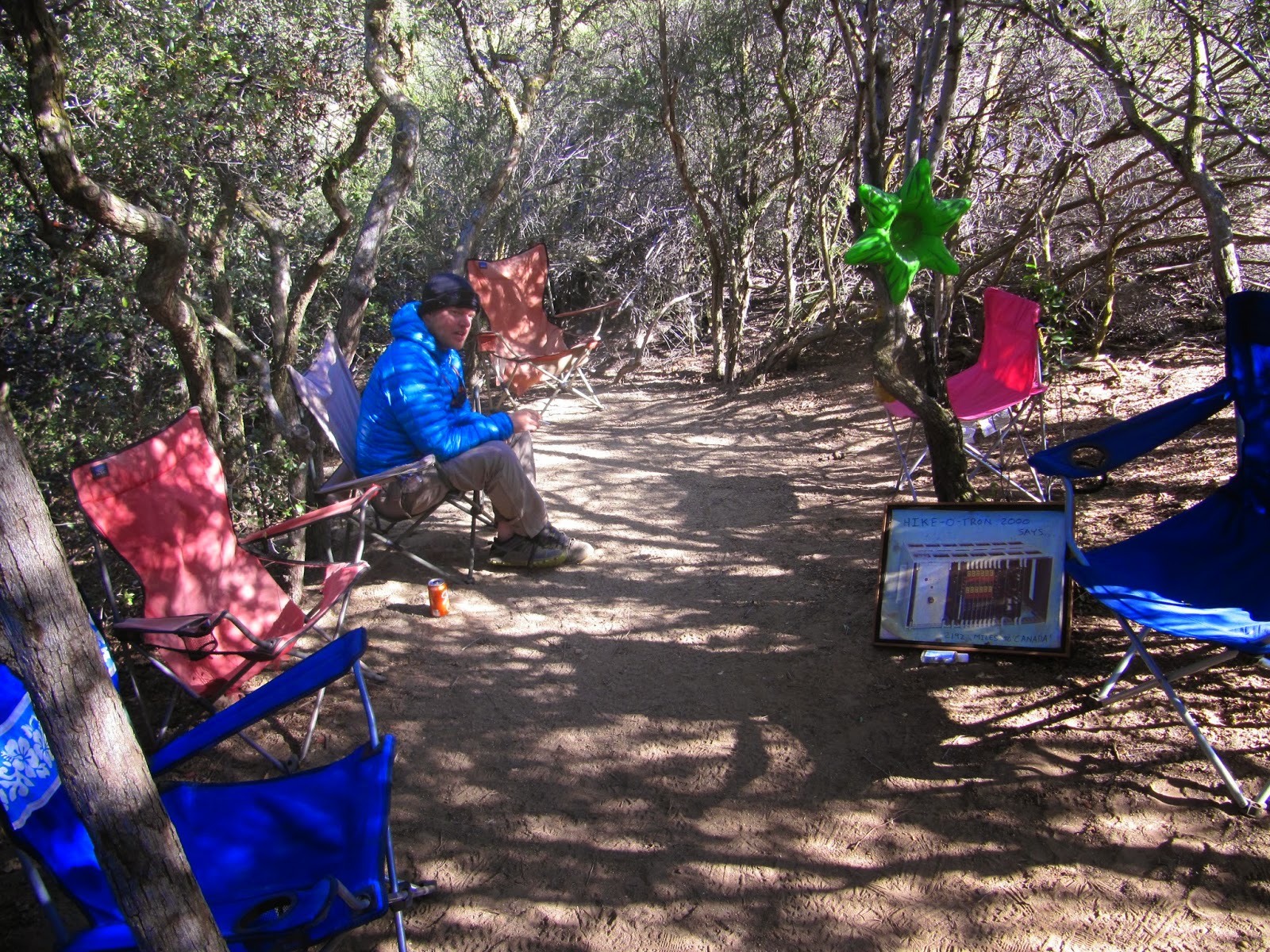 Some unknown trail angel set up this rest area along the trail, complete with camp chairs, and drinks. 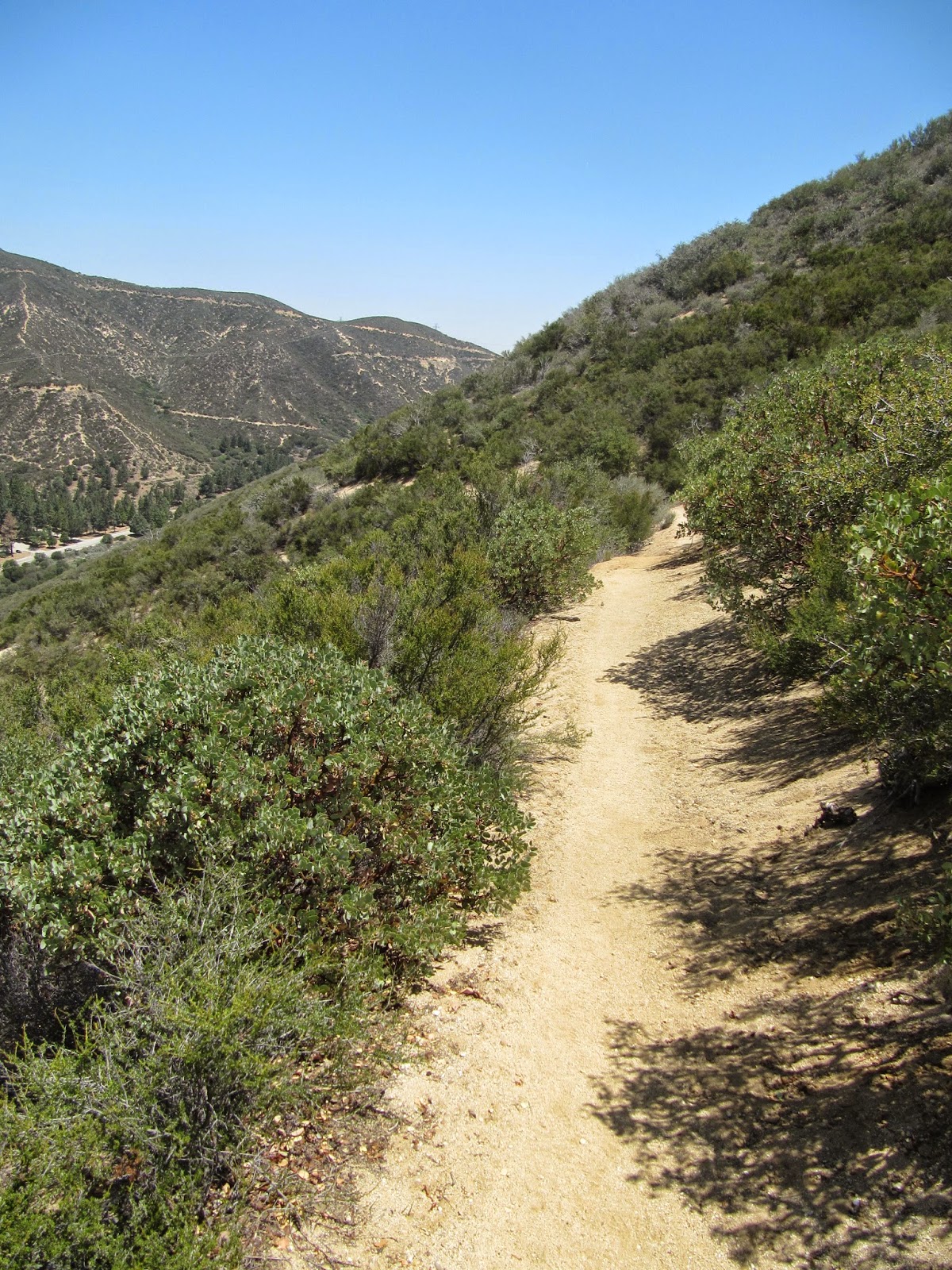 This is still the desert, and the trail continues to wind its way through the Chaparral ground cover. 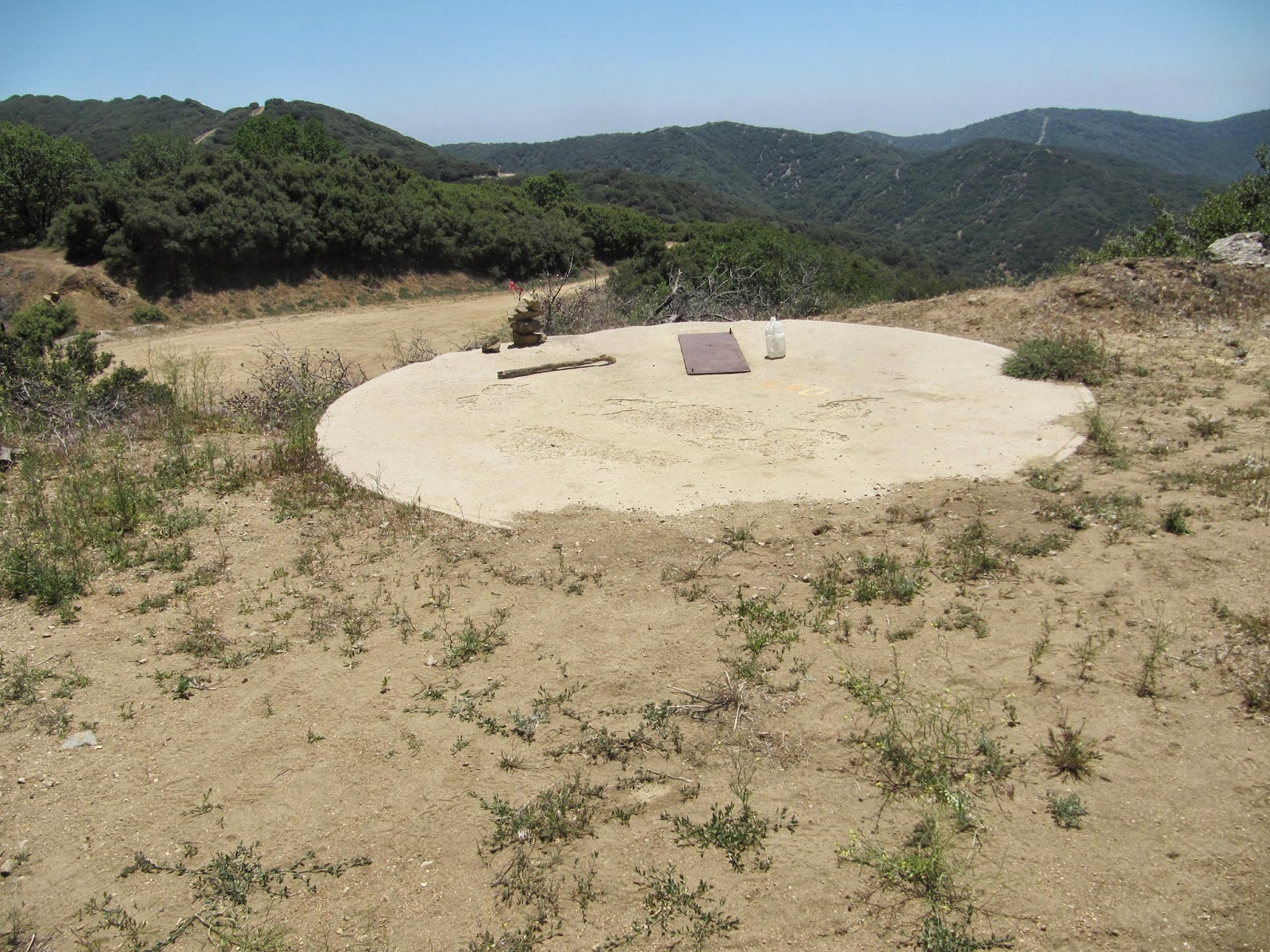 This is a BLM fire tank. Water can be accessed by removing the metal lid and lowering a plastic bucket into the water below. 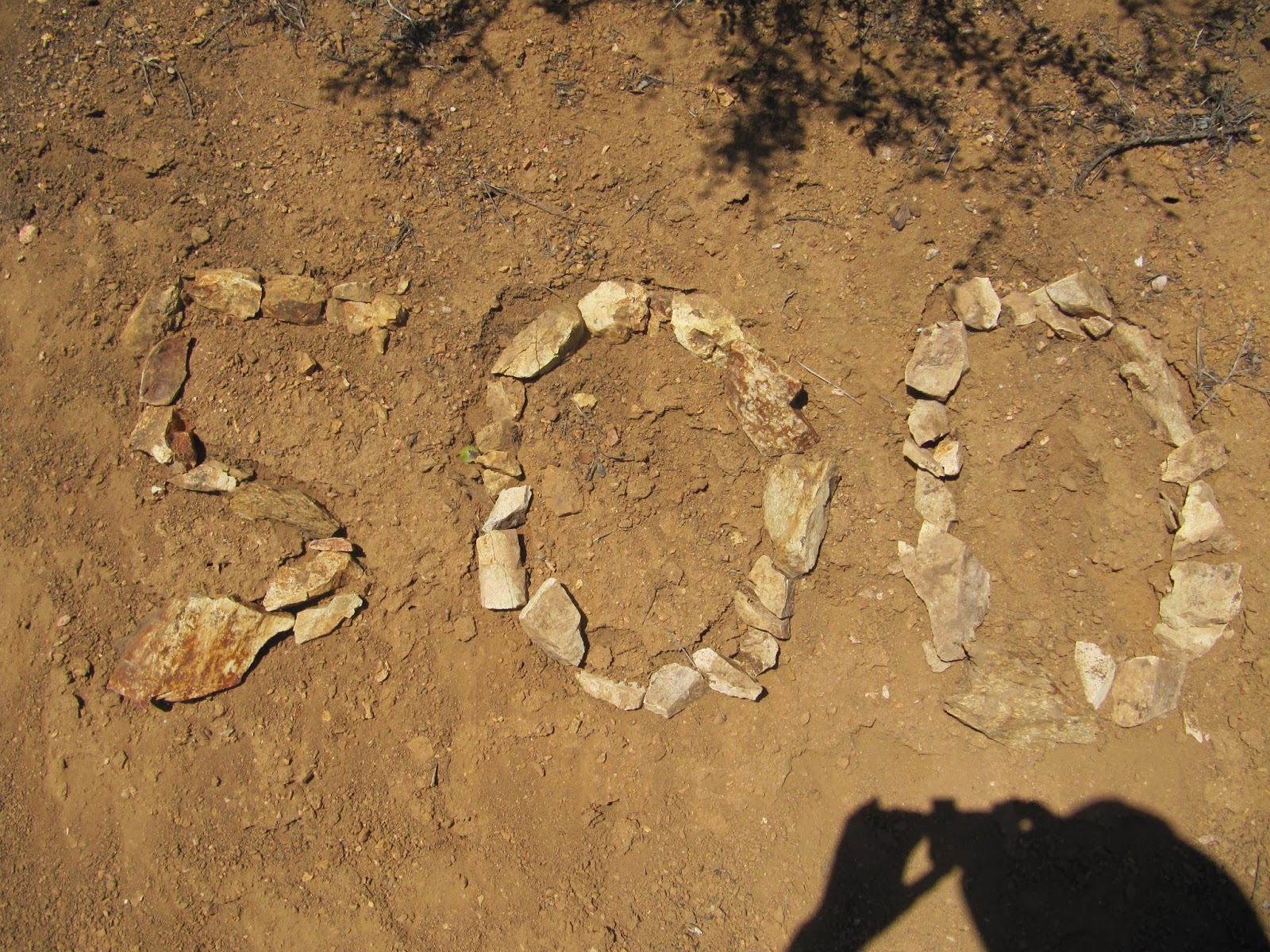 Progress continues to be made along the trail. Every now and then, the trail would meander through a growth of trees. 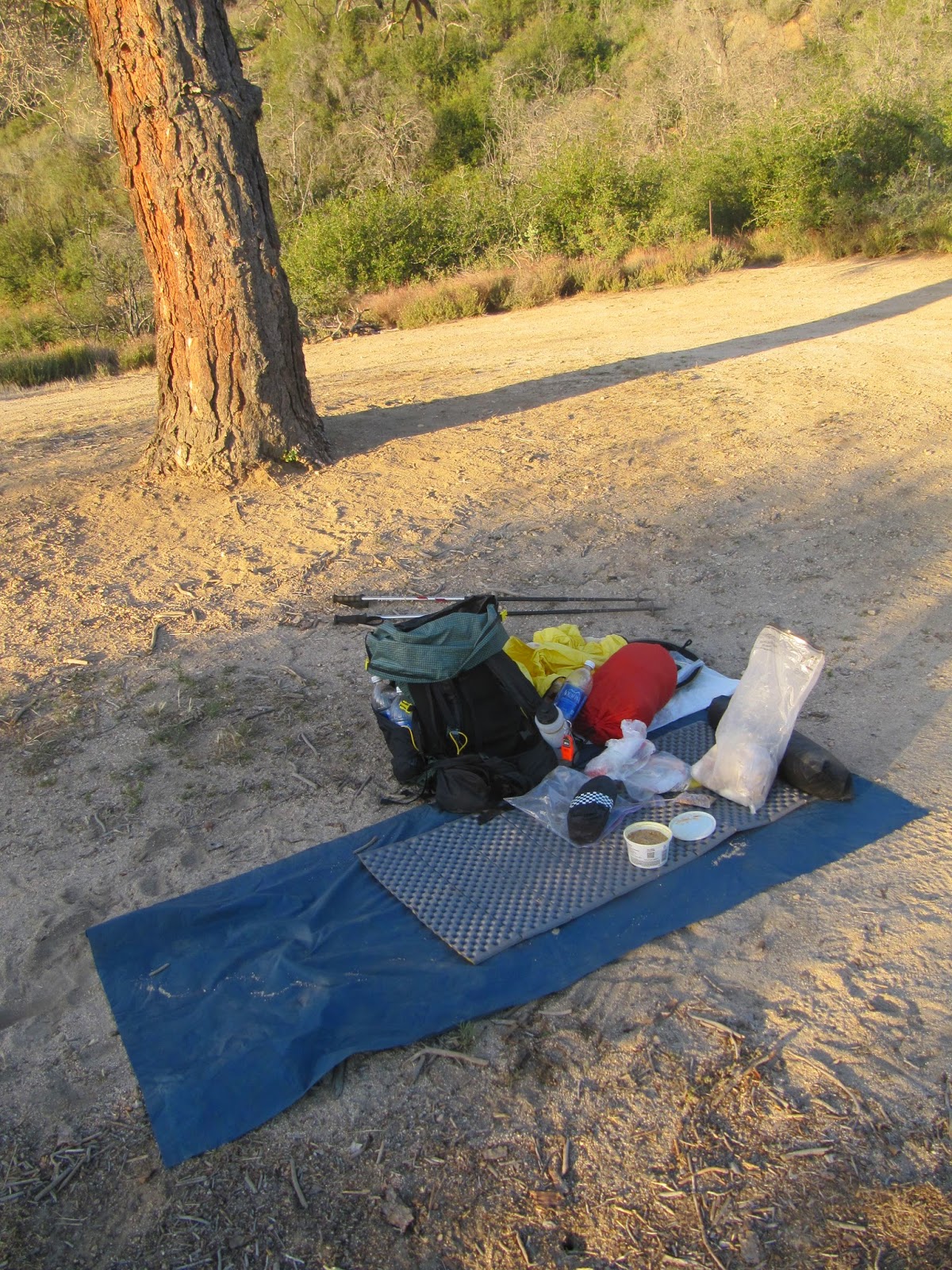 I've come down out of the Angeles National Forest, and am now camped on the edge of the great Mojave Desert. Tomorrow, I will begin a two day trek across this vast expanse.